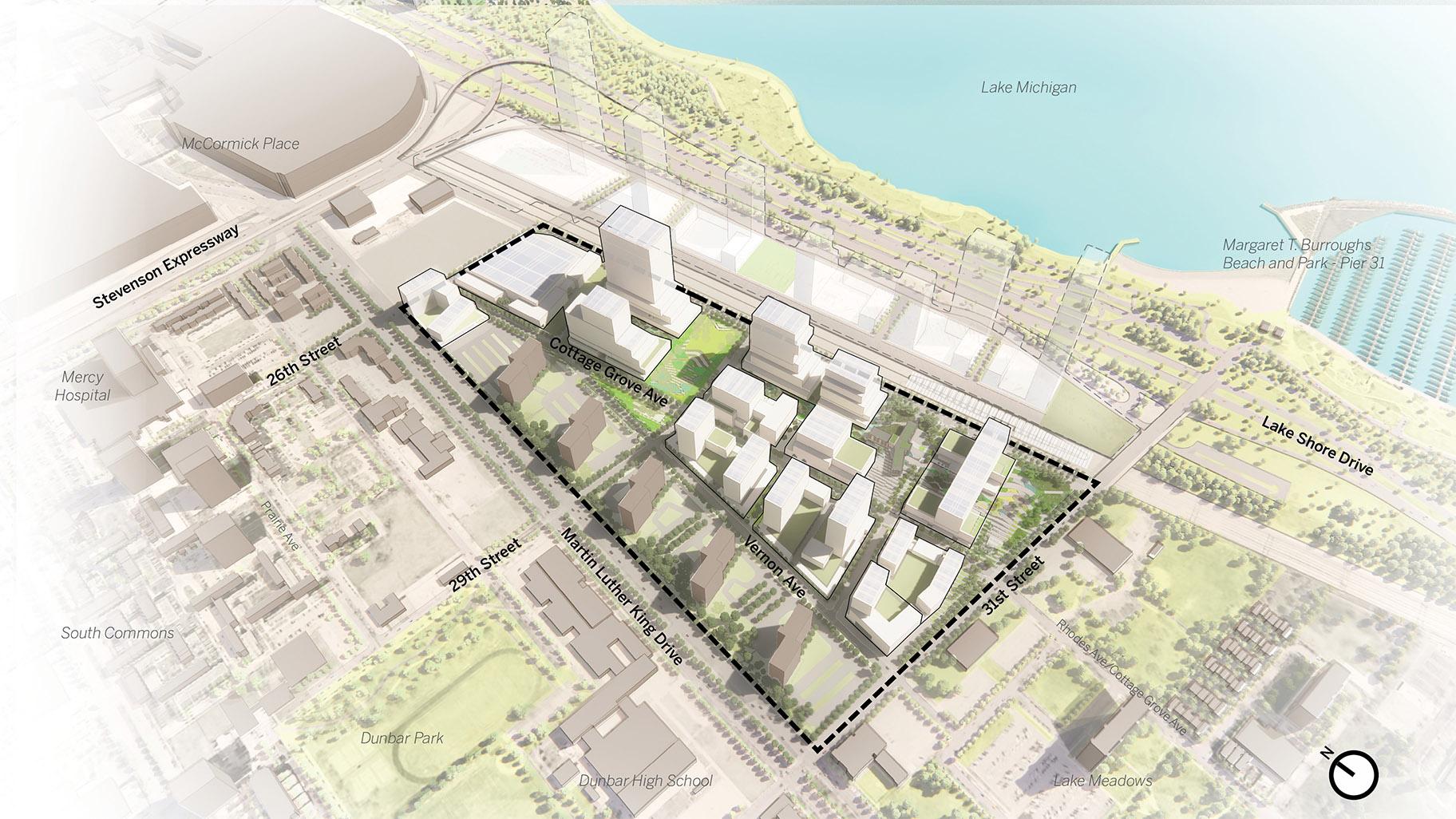 A rendering of the redevelopment set for the former Michael Reese Hospital site in Bronzeville on the city’s South Side. (Courtesy of Skidmore, Owings & Merrill)

The site of the long-defunct Michael Reese hospital is poised to be transformed into a new Chicago neighborhood. Bronzeville Lakefront will include 4,800 new homes, offices, research facilities and stores as part of a $4 billion redevelopment set to be approved by the Chicago City Council on Wednesday.

The proposal from GRIT, a consortium led by Chicago-based Farpoint Development, cleared three City Council committees Monday and Tuesday, as aldermen lavished praise on the complicated agreement that relies on $60 million in city funds to build new roads and another $30 million to clean up nearly century-old hazardous waste left behind by a radium processing plant.

“This has been a long time coming,” Ald. Sophia King (4th Ward) told members of the City Council’s Finance Committee on Monday, which unanimously approved the plan. The Housing Committee and the Zoning committees followed suit Tuesday, setting up a final vote by the full City Council on Wednesday. “It is the most beautiful site left open along the lakefront in the city.”

The road construction will be paid for as part of the city’s $3.7 billion infrastructure plan approved in November.

The expected approval by the City Council will close a notorious chapter in Chicago history that began when former Mayor Richard M. Daley purchased the 48-acre site just south of McCormick Place for $91 million in 2009 as part of his plans to win the 2016 Olympic games for Chicago. Instead, the city lost the games to Rio and the land has been vacant since, costing the city tens of millions of dollars in interest and lost property tax revenue.

The agreement calls for GRIT to purchase the land for $97 million. In addition, the deal calls for the developer to pay $25 million to the Chicago Public Schools toward the expansion and improvement of nearby schools, to set aside 40,000 square feet of open space near 31st Street and to rent 10% of the retail space to local businesses at a 20% discount.

Plans also call for homes to be set aside for seniors as well as a welcoming center designed to showcase Bronzeville’s history as a mecca for Black Chicagoans.

“This project I believe is going to be a north star for years to come,” said Ald. Matt Martin (47th Ward).

The city’s affordable housing ordinance requires 20% of the new units to be set aside for low- and moderate-income Chicagoans. Up to 1,017 units will be built on-site — more than the minimum set by the ordinance, which allows developers to build units elsewhere in the city or pay a fee.

King said she was proud of that provision, which she said will ensure that the new neighborhood will be economically diverse.

The first phase of the redevelopment is set to include the ARC Innovation Center, an equity-focused research arm of Israel’s renowned Sheba Medical Center.