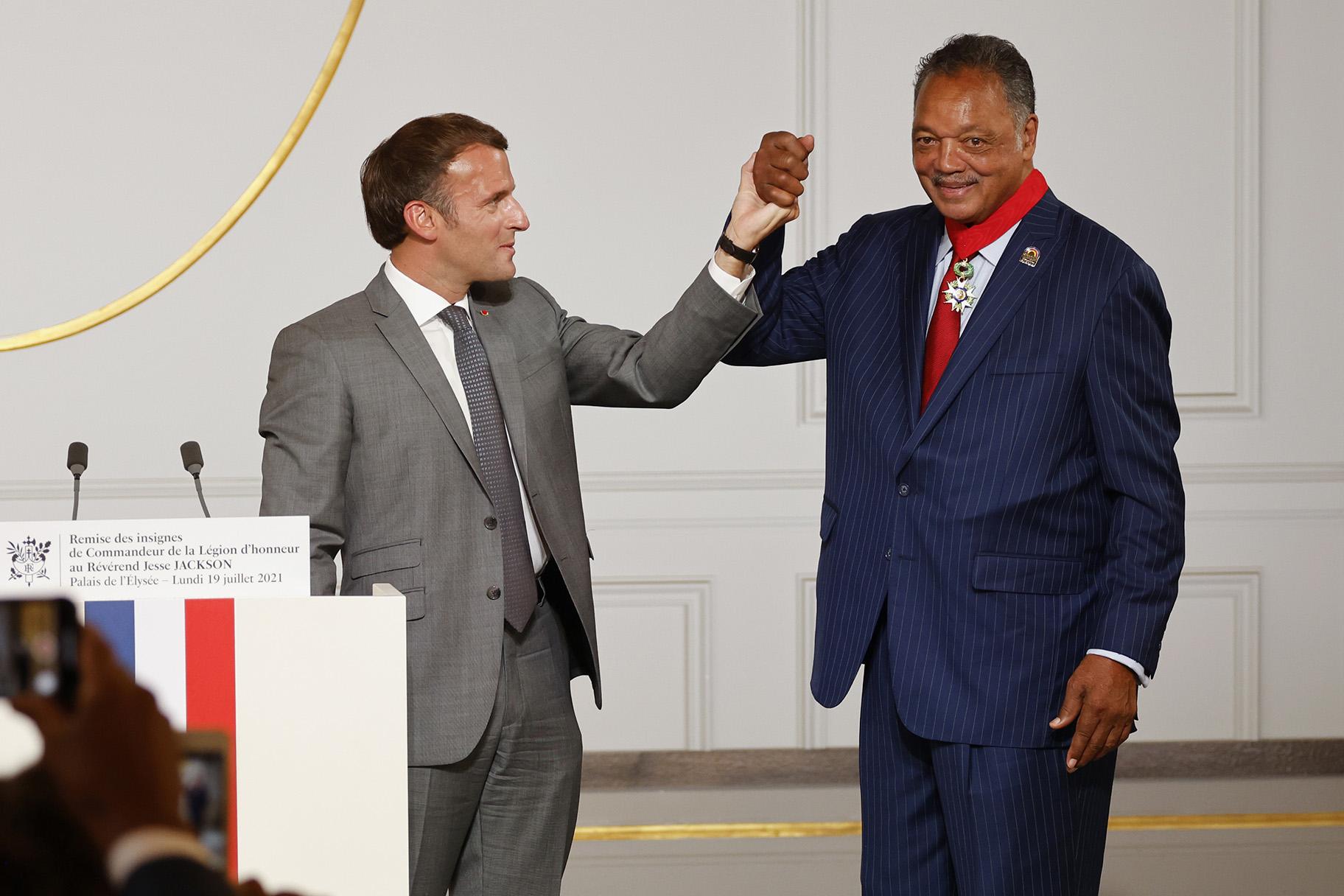 French President Emmanuel Macron, left, and Reverend Jesse Jackson raise their hands after Jackson was awarded with the Legion d’Honneur (Officer of the Legion of Honor) medal during a ceremony at the Elysee Palace in Paris, Monday, July 19, 2021. (Ludovic Marin / Pool Photo via AP)

PARIS (AP) — French President Emmanuel Macron on Monday made American civil rights leader Jesse Jackson a commander of the Legion of Honor, France’s highest award, for helping “change the destiny of the United States” and with it, the world.

Jackson, 79, who had gallbladder surgery this year and is being treated for Parkinson’s disease, had visible difficulty walking. The founder of the Rainbow/PUSH coalition and two-time U.S. presidential candidate sat beside the podium as Macron spoke at a ceremony in Paris.

“He’s a visionary with talent for uniting and leading people, whose moral and physical courage… has helped him to overcome adversity and change the destiny of the United States, our oldest ally, and to change our world for the better,” Macron said at the gathering at the presidential Elysee Palace.

Speaking in English, the French president called Jackson “a great friend of France” and “very popular in our country, but not just in our country.”

Macron recounted Jackson’s life, from his childhood in segregated South Caroline to his work with Martin Luther King Jr. and his activism in Chicago. After draping a red ribbon with a medal around Jackson’s neck. Macron clasped his hand amid applause from the small invited audience. Jackson did not make any remarks during the ceremony.

The civil rights leader has remained active despite his health problems. He has advocated for vaccinations against COVID-19 in Black communities with below-average inoculation rates.

Through Chicago-based Rainbow/PUSH, the 1984 and 1988 candidate for the Democratic presidential nomination also has continuing to advocate for voting rights. Last month, Jackson he was arrested and ticketed for obstructing traffic during a voting rights demonstration near the U.S. Capitol.

Macron described the world of “institutionalized inequality” that Jackson grew up in and that shaped his future as a civil rights leader. He recounted Jackson’s failed bids for the presidency and said, “You paved the way for those who came after.”

Referring to Barack Obama’s election as the first Black president of the United States, the French leader asserted that “2008 would definitely have been impossible without your fights and your contribution.”

Macron also recounted a “less-known story for which you never sought credit,” Jackson’s 1990 role in freeing French hostages. During the first Gulf War, citizens from several countries trying to stop the invasion of Kuwait were taken hostage by Iraqi leader Saddam Hussein.

Macron said Jackson negotiated the release of French citizens “and thanks to you, they were safely returned to their families.”

“You are a brother to us,” Macron said.