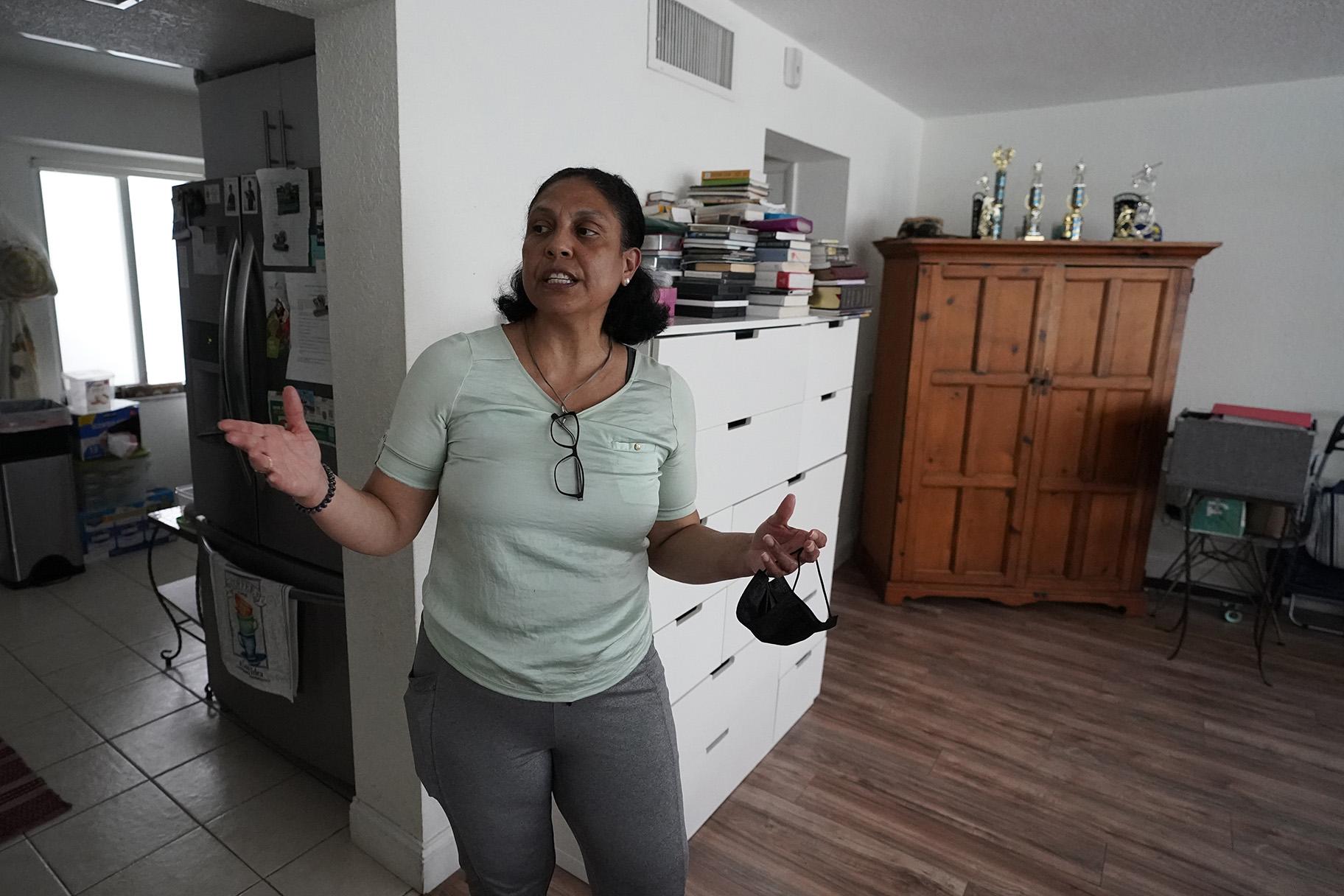 Cristina Livingston recounts the problems she has had in her apartment including a leaking ceiling and mold, Friday, June 18, 2021, at her home in Bay Harbor Islands, Fla. (AP Photo / Wilfredo Lee)

WASHINGTON (AP) — The Biden administration on Thursday extended the nationwide ban on evictions for a month to help millions of tenants unable to make rent payments during the coronavirus pandemic,  but said this is the last time it plans to do so.

Dr. Rochelle Walensky, director of the Centers for Disease Control and Prevention, extended the evictions moratorium from June 30 until July 31. The CDC said “this is intended to be the final extension of the moratorium.”

A Biden administration official said the last month would be used for an “all hands on deck” multi-agency campaign to prevent a wave of evictions. One of the reasons the moratorium was put in place was to prevent further spread of COVID-19 by people put out on the streets and into shelters.

As of the end of March, 6.4 million American households were behind on their rent, according to the Department of Housing and Urban Development. As of June 7, roughly 3.2 million people in the U.S. said they faced eviction in the next two months, according to the U.S. Census Bureau’s Household Pulse Survey.

The news brought a sense of relief to tenants on the verge of being evicted and whose only lifeline was the CDC moratorium.

Among them was Cristina Livingston, a 55-year-old mother of two from Bay Harbor Islands, Florida, who lost her job as an administrative assistant during the pandemic. She couldn’t get federal rental assistance to pay upwards of $14,000 in back rent because her landlord refused to take it.

“Ah, great. I’m just asking for a little bit more time. I just need the time to move out of here in a dignified way,” said Livingston, who said her biggest fear was that she would be evicted without notice before finding a new job.

“It’s been a devastating experience,” she said. “I have never been in this situation. It’s killing me because I’m afraid anytime somebody is going to come and get me out of here. I don’t have a place to go.”

Ronald Leonard, a 68-year-old retired heavy equipment operator from Daytona Beach, was facing eviction from his one-bedroom apartment. His landlord also is refusing to take federal assistance to cover $5,000 in back rent.

The extension announcement Thursday was accompanied by a flurry of administration activity. The Treasury Department issued new guidance encouraging states and local governments to streamline distribution of the nearly $47 billion in available emergency rental assistance funding. And Associate Attorney General Vanita Gupta released an open letter to state courts around the country encouraging them to pursue a number of alternatives that would protect both tenants and landlords.

Gupta’s letter states that “eviction filings are expected to overwhelm courts across the country,” unless additional steps are taken.

The White House had acknowledged Wednesday that the emergency pandemic protection, which had been extended before, would have to end at some point. The trick is devising the right sort of off-ramp to make the transition without major social upheaval.

Gupta’s letter to state courts encourages them to do everything possible to prevent or delay evictions.

“Losing one’s home can have catastrophic economic and psychological effects,” she states. “The entire legal community, including the Department of Justice, the bar, and the judiciary, has an obligation to do what it can to ensure that each and every individual has meaningful and equal access to justice before facing such consequences.”

That includes giving tenants as much time as possible, and making sure both tenants and landlords are aware of any emergency relief funds that may be available.

She references steps made by state courts in Texas, Michigan and Pennsylvania and directs state courts to an online assessment tool designed by the National Center for State Courts to help jurisdictions determine the most appropriate model.

This week, dozens of members of Congress wrote to President Joe Biden and Walensky, calling for the moratorium to be not only extended but also strengthened in some ways.

The letter, spearheaded by Democratic Reps. Ayanna Pressley of Massachusetts, Jimmy Gomez of California and Cori Bush of Missouri, called for an unspecified extension to allow the emergency rental assistance included in the American Rescue Plan to get into the hands of tenants.

Ending the assistance too abruptly, they said, would disproportionately hurt some of the minority communities that were hit so hard by the virus, which has killed more than 600,000 people in the United States. They also echoed many housing advocates by calling for the moratorium’s protections to be made automatic, requiring no special steps from the tenant to gain its protections.

“The impact of the federal moratorium cannot be understated, and the need to strengthen and extend it is an urgent matter of health, racial, and economic justice,” the letter said.

Diane Yentel, president of the National Low Income Housing Coalition, called an extension of the eviction ban “the right thing to do — morally, fiscally, politically, and as a continued public health measure.”

But landlords, who have opposed the moratorium and challenged it in court, were against any extension. They have argued the focus should be on speeding up the distribution of rental assistance.

Others welcomed the moratorium extension but said the Biden administration needs to think about more long-term solutions, including expanding the federal government’s housing voucher program for low-income tenants. Even before the pandemic, there were 24 million people who would have benefited from the program but couldn’t get help — many of those people of color.

“For now. extending the eviction moratorium will protect the millions of people behind on rent, but many of these renters faced a similar deadline only months ago and they will face this deadline again next month,” Alicia Mazzara, a senior research analyst with the Center on Budget and Policy Priorities, told reporters. “They need a long-term solution, not another Band-Aid. Policy makers should seize this moment to enact a more enduring solution.”