You may have been stuck at home the past 15 months, but Chicago’s ever-growing skyline didn’t skip a beat.

New buildings have sprouted up all over downtown Chicago, including some projects that might surprise you.

Geoffrey Baer takes us on a tour in this week’s Ask Geoffrey.

I just started going into the Loop again and was amazed at all the new buildings. Can you do an overview of some recent projects that were finished during the pandemic?

You probably know Gang for the St. Regis’ neighbor Aqua, with its undulating balconies.

The zigzag profile of the St. Regis was inspired by a natural crystalline form called a frustum, and is the third tallest building in Chicago! It’s also the world’s tallest designed by a woman.

One curious detail is the 83rd floor – it’s completely empty and open to the elements. It’s known as a “blow through” floor, and was added to the building’s design to reduce sway in the structure after wind tunnel tests on a model of the building.

Another huge development downtown is down the river at Wolf Point, the confluence of the north, south and main branches of the Chicago River.

Over the past decade it’s been totally transformed by three sleek towers, two of which are new since the pandemic.

The 60-story Wolf Point East was completed last year and is home to almost 700 residential units.

And a soaring office building at the center of the complex now under construction will be known as Salesforce Tower, after the tech company that will be the main tenant. Both new towers are designed by Pelli Clarke Pelli of New Haven, which also did the site plan.

Another supertall project that’s nearing completion is One Chicago across the street from Holy Name Cathedral on the Near North Side. 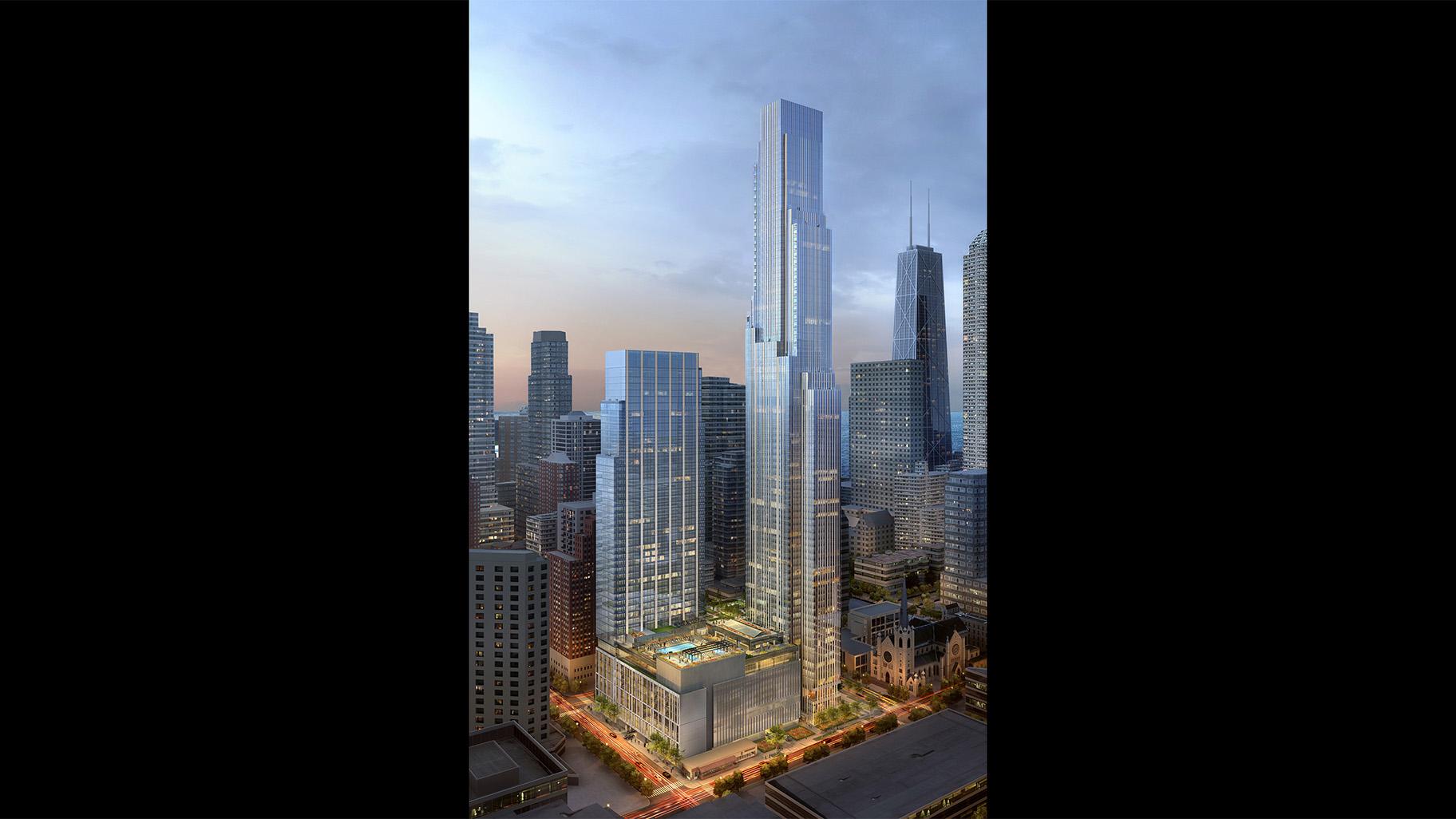 One Chicago across the street from Holy Name Cathedral on the Near North Side is nearing completion. (Credit Goettsch Partners)

The residential complex includes two towers, 49 and 76 stories respectively, designed in partnership by Goettsch Partners and Hartshorne Plunkard Architecture. They’re connected at the base by retail and office space, with tenants expected to move in later this year.

Goettsch Partners also designed a high-profile new tower on the Chicago River’s South Branch: 110 N. Wacker. The building is partly supported by gigantic metal “trees” or tridents to open up the base for a riverwalk.

And not every new addition downtown is actually a new building.

One you won’t see from Lake Shore Drive: the extensively renovated base of the Sears … OK, Willis Tower.

Over the past few years, the building’s lobby and ground levels have undergone a complete overhaul by architecture firm Gensler, featuring a soaring atrium and new entryways. There’s also new retail, restaurants and an outdoor green space designed to connect the building more with the street instead of being the fortress it once was. 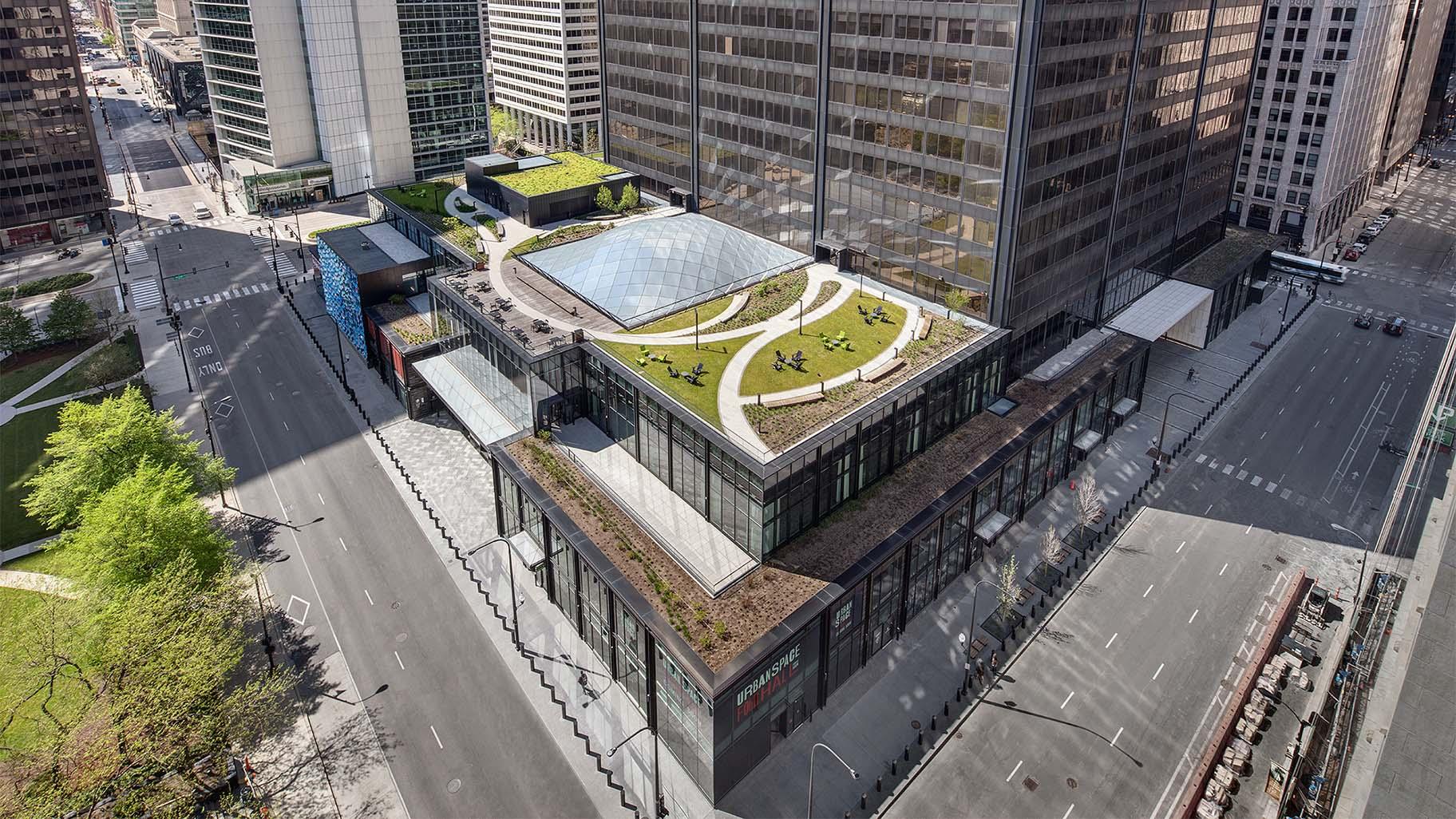 The overhauled base of the Willis Tower (Credit EQ Office)

And you can’t miss an eye-catching new piece of public art along the Jackson Street side of the tower by artist Olafur Eliasson, inspired by waves on Lake Michigan.

These are just a few of the transformations you’ll notice when you return to the Loop this summer, for work or pleasure.

If you cast your gaze in the other direction, you’ll see the new Sable Hotel at the east end of Navy Pier. It’s being marketed as the first hotel ever built on “top” of Lake Michigan.