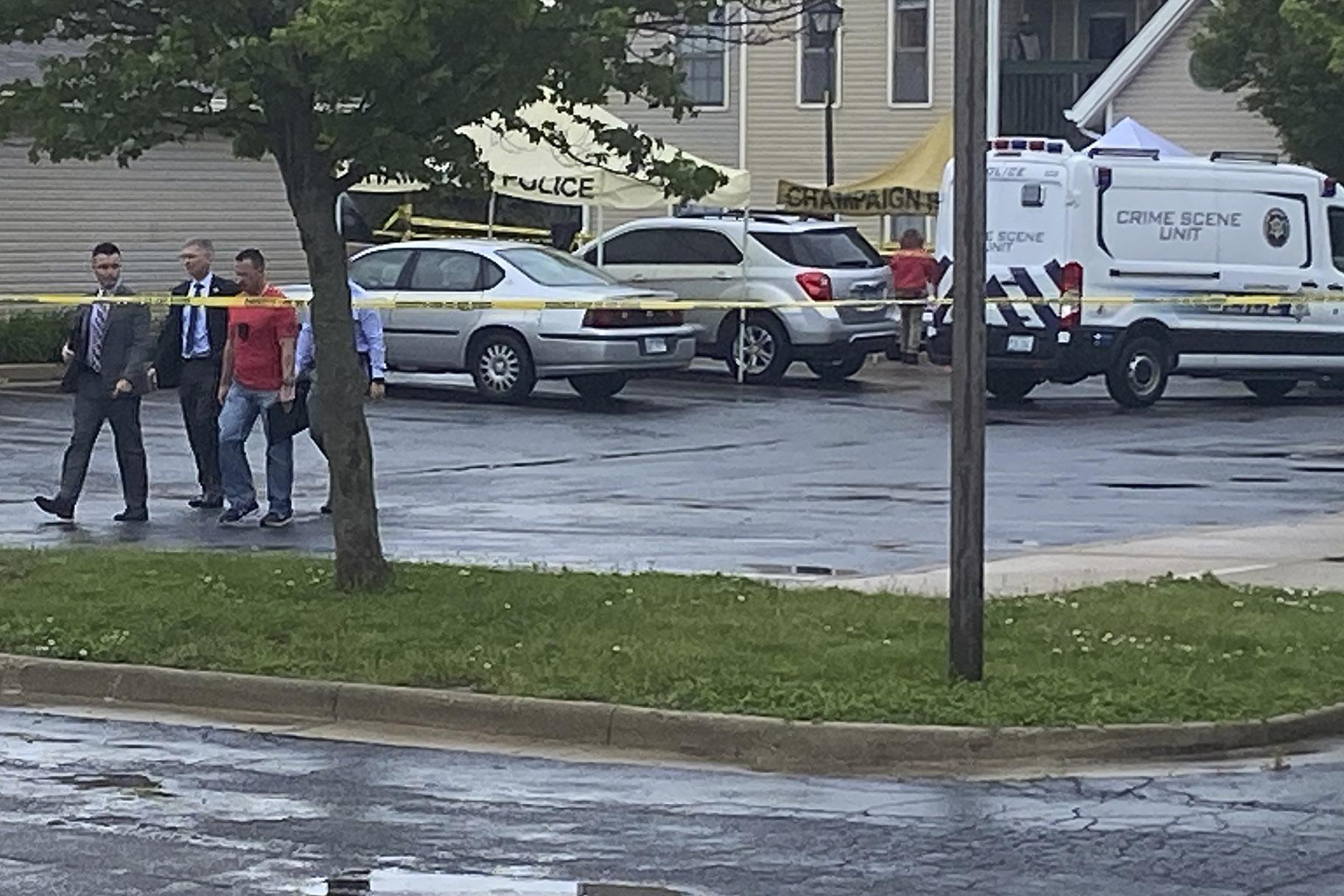 Police investigators work at the scene of a shooting in Champaign, Ill., Wednesday, May 19, 2021. (Jim Rossow / The News-Gazette via AP)

CHAMPAIGN, Ill. (AP) — A gunman killed one central Illinois police officer and wounded another before he was fatally shot during a shootout at an apartment complex early Wednesday, authorities said.

The officers went to the complex in Champaign shortly after 3 a.m. in response to a report about a domestic disturbance and encountered the armed suspect, police said. An exchange of gunfire followed in which both officers and the suspect were shot.

Officer Chris Oberheim, 44, died of his wounds, the city’s police chief, Anthony Cobb, said in a statement. The wounded officer was hospitalized in stable condition, the department said.

The suspect killed in the shootout, Darion Marquise Lafayette, 24, of Champaign, was pronounced dead at the scene, the Champaign County coroner said. Autopsies on Oberheim and Lafayette are scheduled for Thursday.

Police have not released the name of the wounded officer.

Champaign officers have been equipped with body cameras since 2017, and those cameras are supposed to be activated when an officer responds to service calls or is engaged in any law enforcement-related encounter, according to the department’s website.

The department didn’t immediately reply to Associated Press requests for further information about the shootout, including what the officers’ body cameras captured.

Cobb said Oberheim joined the police force in Champaign in 2008. Before that, he spent seven years on Decatur’s police force. Champaign is 125 miles southwest of Chicago.

“His only intention was to serve, protect and help provide care before he was senselessly fired upon and killed,” the chief said.

Monticello Schools Superintendent Vic Zimmerman said in a statement that Oberheim had four daughters, including three who attend the district’s schools, and that he was very involved in their lives.

“Our thoughts and prayers are with his family during this difficult time,” Zimmerman said.

The News-Gazette reported that days earlier Cobb said he feared that a shooting involving police could happen because the city of about 85,000 has been dealing with an increase in gun violence.

Oberheim is the third Champaign police officer to be killed in the line of duty. The other two were killed in 1913 and 1967, the newspaper reported.

The Illinois State Police will lead the investigation into the shooting, with assistance from Urbana police, the Champaign County Sheriff’s Office and the University of Illinois Police Department, Champaign police said.