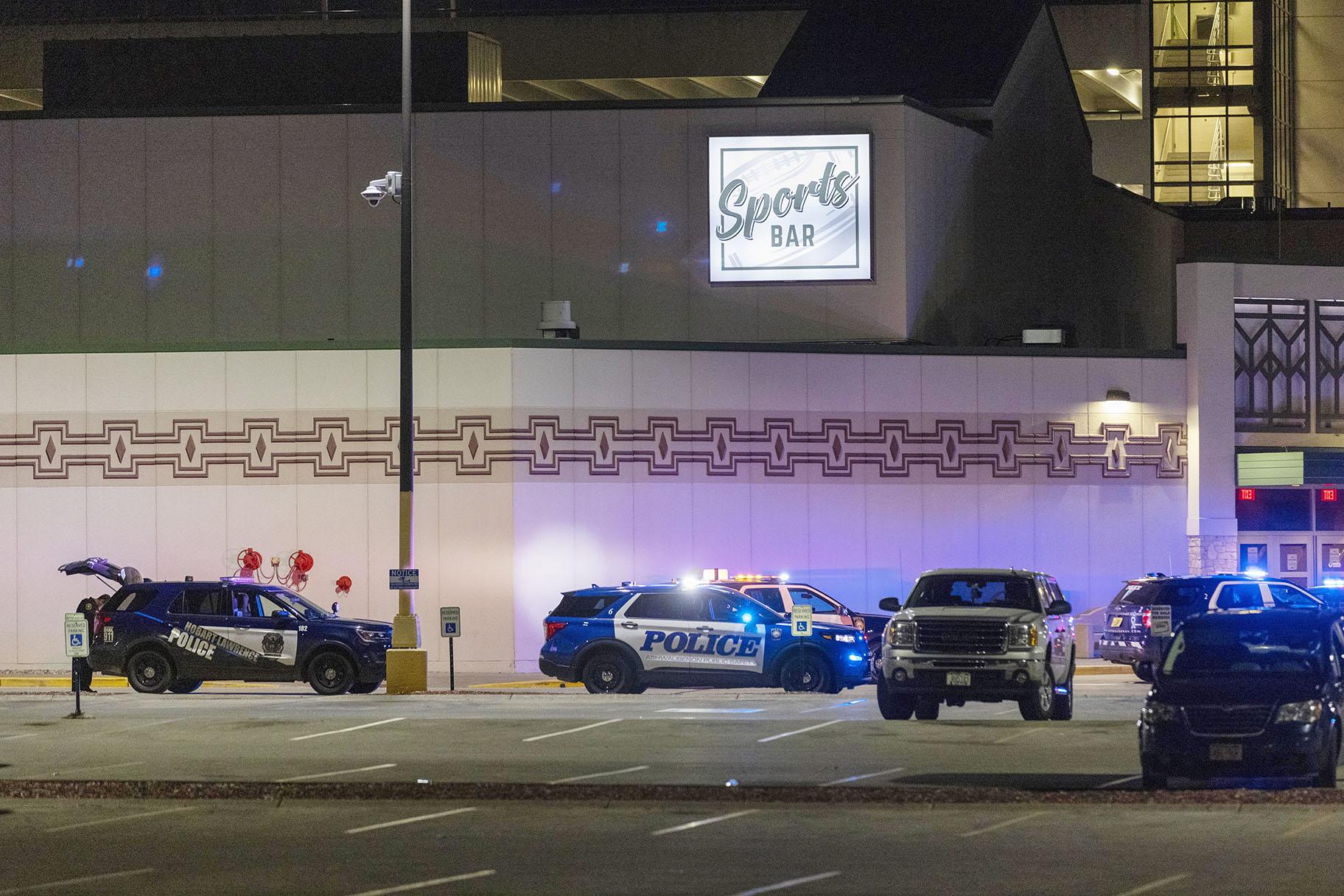 Police line the parking lot outside the Oneida Casino in the early morning hours of Sunday, May 2nd, 2021, near Green Bay, Wisconsin. (AP Photo / Mike Roemer)

GREEN BAY, Wis. (AP) — Tribal leaders in northeastern Wisconsin were in shock Sunday hours after a gunman opened fire at their casino complex, killing two people and wounding another in what witnesses described as a hailstorm of bullets.

Brown County Sheriff’s Lt. Kevin Pawlak said the shooting at the Oneida Casino in Green Bay on Saturday night didn’t appear to be a random attack.

“He was targeting a specific victim who was not there, but he decided to still shoot some of the victim’s friends or co-workers, it appears,” Pawlak said at a news conference early Sunday. Police responding to the scene shot the gunman to death.

Oneida Chairman Tehassi Hill told WLUK-TV on Sunday that he was in “disbelief” and called the shooting “scary.” He said the tribe prohibits firearms on its properties but that “(mass shootings are) kind of a regular thing in this country.”

Authorities have not released the identities of the gunman or his victims. The wounded person was being treated at a Milwaukee hospital, Pawlak said.

The attack happened around 7:30 p.m. in the restaurant at the casino complex operated by the Oneida Nation, whose reservation is located on the western side of Green Bay about 4 miles (6.4 kilometers) from Lambeau Field, home of the Green Bay Packers. The complex includes a casino, conference center, hotel and restaurant.

“I know for sure two, because it happened right next to us, literally right next to us,” Yatim said. “But he was shooting pretty aggressively in the building, so I wouldn’t doubt him hitting other people. We got the hell out of there. Thank God we’re OK, but obviously we wish the best for everybody who’s been shot.”

Pawlak, the sheriff’s department lieutenant, wasn’t sure if the shooter was a former restaurant employee but said “it appears there’s some relationship that had to do with employment.”

“Whether or not they all worked there, we’re still working on,” he said.

Gambler Max Westphal said he was standing outside after being evacuated from the building for what he thought was a minor issue.

“All of a sudden we hear a massive flurry of gunshots — 20 to 30 gunshots for sure,” Westphal told WBAY-TV. “We took off running towards the highway. … There had to have been 50 cop cars that came by on the highway. It was honestly insane.”

Pawlak said authorities called for a “tactical alert” after receiving the report of an active shooter. That “brings every agency from around the area to the casino, to the Radisson,” he said of the large law enforcement presence.

Hill, the tribal chairman, told WLUK-TV that he feels security is tight in the casino but that the tribe may have to consider tougher protocols for the complex depending on investigators’ findings. 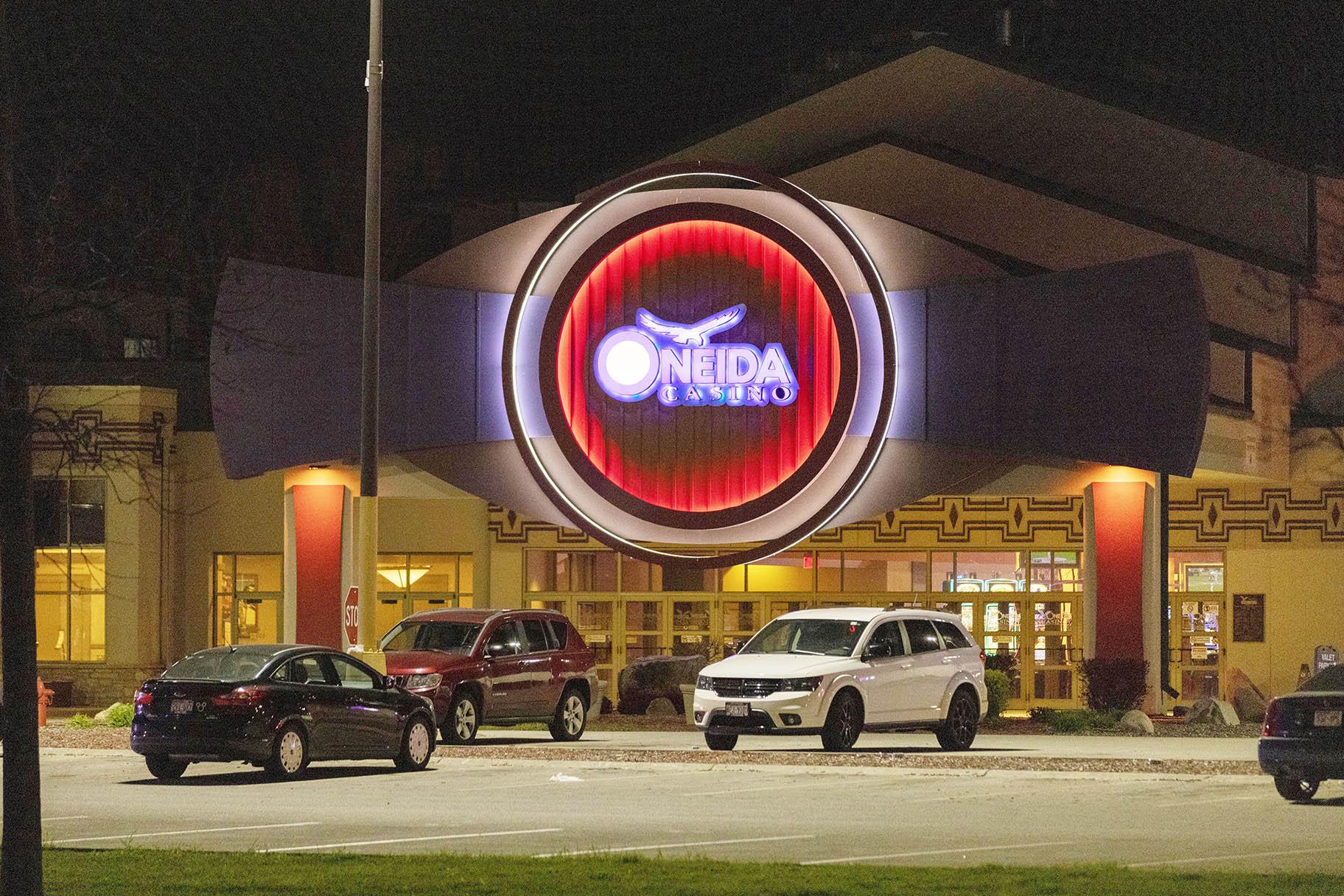 The Oneida Casino lights glow in the parking lot in the early morning hours of Sunday, May 2nd, 2021, near Green Bay, Wisconsin. (AP Photo / Mike Roemer)

“We have the smallest and closest community in professional sports,” LaFleur said. “It’s unfortunate anytime events like this occur & sad when it hits so close to home.”

Gov. Tony Evers issued a statement late Saturday saying he was “devastated” to hear about the shooting.

“Our hearts, thoughts, and support go out to the Oneida Nation, the Ashwaubenon and Green Bay communities, and all those affected by this tragedy.”

Evers, a Democrat, called a special legislative session on gun control in the fall of 2019. He proposed a so-called “red flag” law that would have allowed judges to take guns away from peopled deemed to be a danger, and a bill requiring a background check for almost all gun purchases. Republicans who control the Legislature refused to consider either measure.

Sen. Rob Cowles, a Republican who represents the Green Bay area, issued a statement saying the community has suffered a “traumatic event.”

“My heart goes out to those impacted by the shooting, to the Oneida Nation and to all of Northeast Wisconsin as we continue coping with this senseless violence,” he said. “Those victims and families of those killed and injured will remain in my thoughts and prayers.”

Green Bay Mayor Eric Genrich, a former Democratic legislator, tweeted that gun violence is a plague that threatens everyone.

“We must unite to eradicate it from our communities and our country,” he said.

The Oneida is one of 11 tribes that operate casinos in Wisconsin under agreements with the state called compacts. Essentially, the tribes pledge a percentage of their gaming revenue to the state in exchange for the exclusive right to offer casino gambling.

Tribal gaming in Wisconsin generated nearly $1.3 billion in gross revenue in the 2018-2019 fiscal year but suffered deep losses in 2020 due to COVID-19 pandemic lockdowns.