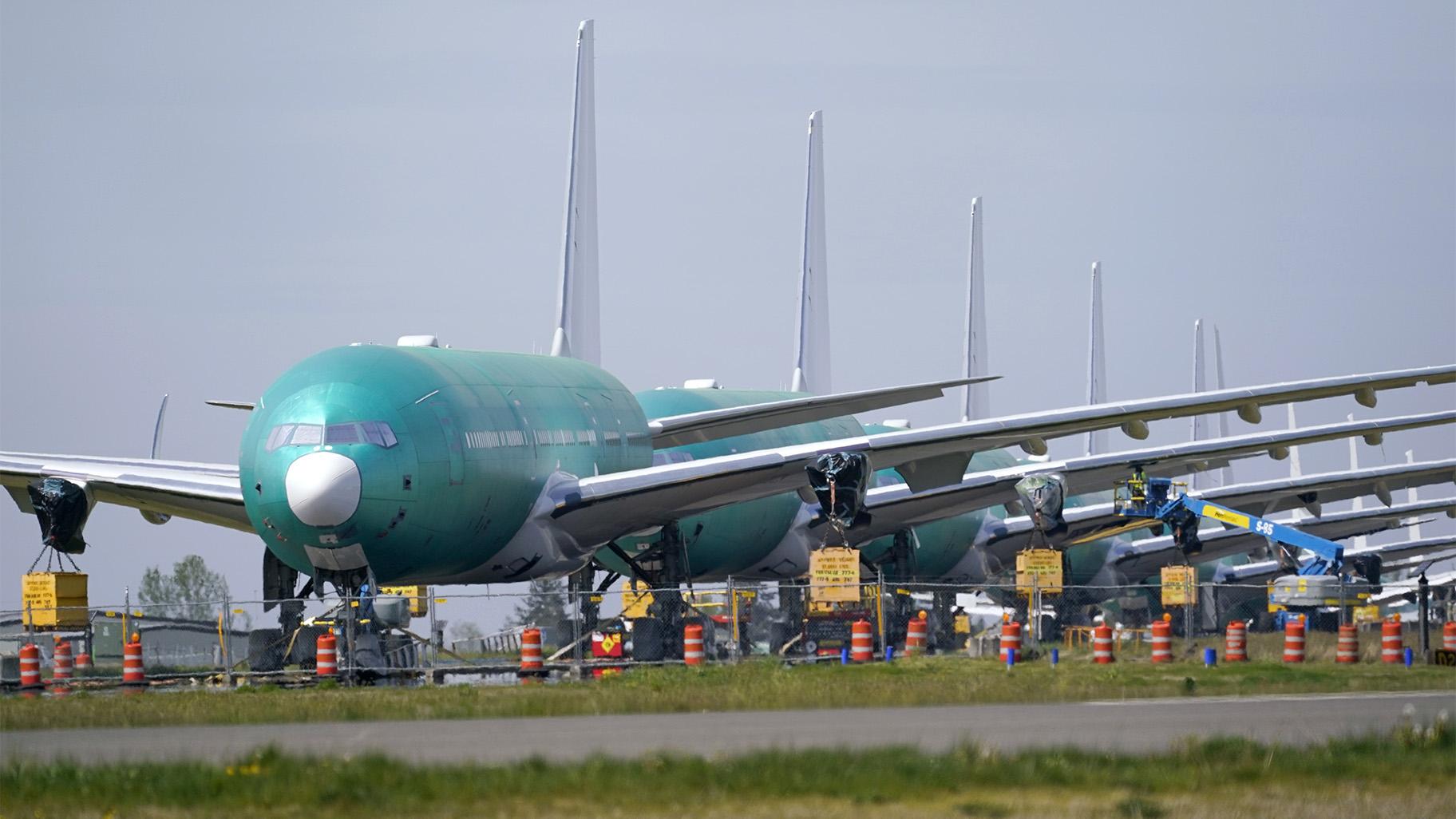 Boeing Co. on Wednesday, April 28, reported a loss of $537 million in its first quarter. The Chicago-based company said it had a loss of 92 cents per share. Losses, adjusted for non-recurring gains, were .53 per share. (AP Photo / Elaine Thompson)

Boeing Co. reported a wider than expected first-quarter loss on Wednesday and took another charge on its program to build two new Air Force One presidential planes after firing a contractor it hired to help perform the work.

The company did not provide a timetable for fixing the latest problem with its 737 Max jet, an electrical issue that has forced airlines to park about 100 of the planes.

The combination of self-inflicted damage and a coronavirus pandemic that has depressed demand for new planes pushed Boeing to its sixth straight quarterly loss. However, CEO David Calhoun said the company is at an “inflection point,” with an increase in vaccinations against COVID-19 raising hopes for a rapid recovery in air travel that could translate to aircraft orders.

Boeing lost $561 million — $537 million attributable to shareholders. Revenue was roughly in line with Wall Street forecasts as the company generated cash by delivering more new airliners than it did a year ago.

After the quarter ended, Boeing suffered a new setback with its 737 Max jetliners, the grounding of dozens of the planes because of issues around electrical grounding of some parts. Boeing continues to say that the fix is simple and will take three or four days per plane once the Federal Aviation Administration approves Boeing’s repair method, but airlines including Southwest, American and United have now been without some of their Max jets for nearly a month with no certainty about when they will be able to use them again.

Boeing has halted Max deliveries while it works on a fix for the electrical issues, which Calhoun said will make April aircraft deliveries — a key source of cash — “very light.”

Boeing only recently resumed deliveries of its two-aisle 787 jets after discovering flaws in the fuselages. And the debut of its next plane, the 777X, is behind schedule because of design changes.

The company is also dealing with delays in its work to build replacements for the current Air Force One planes, which are specially modified 747 jumbo jets. The program is not crucial to Boeing’s financial health but carries prestige, building the presidential planes that are recognizable around the world.

Boeing took a first-quarter charge of $318 million charge related to its $3.9 billion contract with the Air Force for new presidential planes. Boeing fired and sued subcontractor GDC Technics, which in turn laid off about 200 workers and filed for bankruptcy protection this week. GDC, hired for interior work on the planes, filed a countersuit against Boeing.

It is not clear whether Boeing will meet its December 2024 deadline for delivering the planes.

“We continue to make steady progress on this program and are working closely with our customer to assess impact and mitigate risks to the delivery schedule,” Boeing spokeswoman Deborah VanNierop said in an email.

Air Force spokesman Joshua Benedetti said Boeing recently recommended a new schedule for the work, which the Air Force is analyzing. He did not describe the change Boeing wants to make.

During a call with executives, a Bank of America analyst challenged Calhoun about issues affecting a half-dozen different Boeing models.

“These programs are big and they are complicated,” Calhoun said, adding that the company will get “a whole lot better.”

Jeff Windau, an analyst for Edward Jones, said he believes Boeing leaders “are trying to change their culture and revitalize the engineering approach. Time will tell how things progress.”

Calhoun said in a memo to employees that while the pandemic continues to challenge the airplane market, the company sees 2021 as a turning point as vaccines distributed more rapidly.

Excluding one-time items, Boeing’s loss was $1.53 per share. Analysts expected a loss of 97 cents per share, according to a FactSet survey.

The loss was smaller than the $628 million loss Boeing reported a year earlier, when the pandemic was just starting to hit the airline industry. In the first quarter of pre-pandemic 2019, the company earned $2.15 billion on revenue of $22.92 billion.

Revenue fell 10% from a year earlier, to $15.22 billion, nearly matching the $15.23 billion that analysts expected. Boeing generated cash when regulators in the U.S. and other countries allowed the company to resume deliveries of 737 Max jets, which were grounded for nearly two years after two crashes that killed 346 people.

Boeing delivered 77 commercial planes in the quarter, up from 50 in the same period last year, although revenue from those sales dropped.

The company’s defense and space business accounted for nearly half of Boeing revenue, and it earned a profit as revenue climbed 19%.

Last week, the company announced that the board raised Calhoun’s retirement age from 65 to 70, meaning he won’t be forced to step down next April. At the same time, Boeing said Chief Financial Officer Greg Smith, 54, will retire in July, a move that caught Wall Street off guard. Analysts speculated that Smith saw his path to the top job closed off by Calhoun’s extended term.