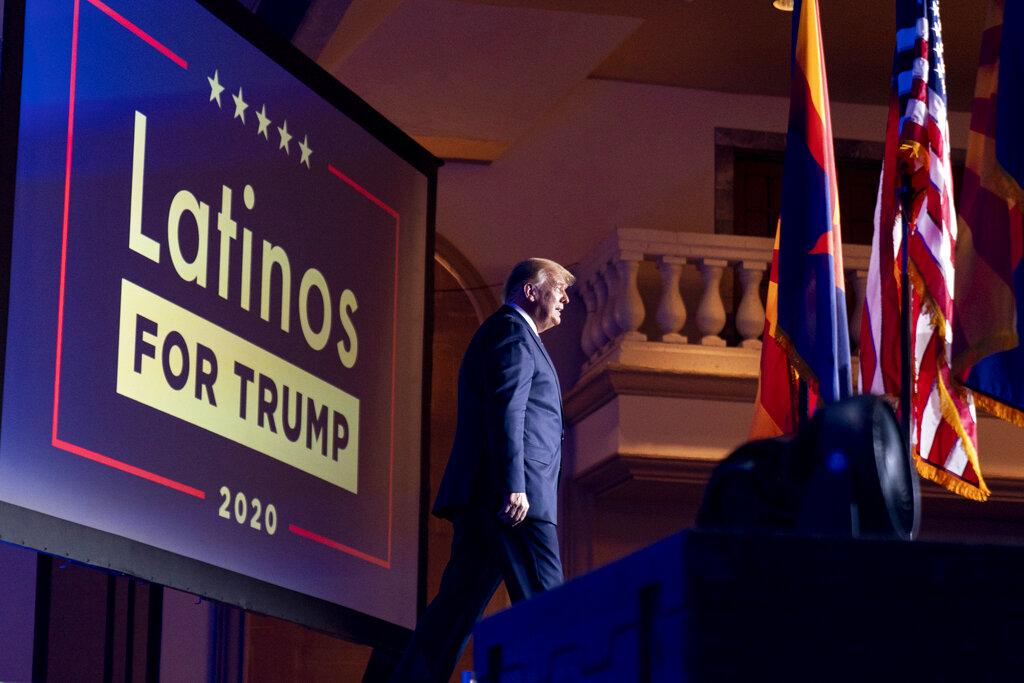 WASHINGTON (AP) — Tom Perez was a guest on a Spanish-language talk radio show in Las Vegas last year when a caller launched into baseless complaints about both parties, urging Latino listeners to not cast votes at all.

Perez, then chairman of the Democratic Party, recognized many of the claims as talking points for #WalkAway, a group promoted by a conservative activist, Brandon Straka, who was later arrested for participating in the deadly Jan. 6 insurrection at the U.S. Capitol.

In the run-up to the November election, that call was part of a broader, largely undetected movement to depress turnout and spread disinformation about Democrat Joe Biden among Latinos, promoted on social media and often fueled by automated accounts.

The effort showed how social media and other technology can be leveraged to spread misinformation so quickly that those trying to stop it cannot keep up. There were signs that it worked as Donald Trump swung large numbers of Latino votes in the 2020 presidential race in some areas that had been Democratic strongholds.

Videos and pictures were doctored. Quotes were taken out of context. Conspiracy theories were fanned, including that voting by mail was rigged, that the Black Lives Matter movement had ties to witchcraft and that Biden was beholden to a cabal of socialists.

That flow of misinformation has only intensified since Election Day, researchers and political analysts say, stoking Trump’s baseless claims that the election was stolen and false narratives around the mob that overran the Capitol.

More recently, it has morphed into efforts to undermine vaccination efforts against the coronavirus.

“The volume and sources of Spanish language information are exceedingly wide-ranging and that should scare everyone,” Perez said.

The funding and the organizational structure of this effort is not clear, although the messages show a fealty to Trump and opposition to Democrats.

A nonpartisan academic report released this past week said most false narratives in the Spanish-language community “were translated from English and circulated via prominent platforms like Facebook, Twitter and YouTube, as well as in closed group chat platforms like WhatsApp, and efforts often appeared coordinated across platforms.”

“The most prominent narratives and those shared were either closely aligned with or completely repurposed from right-wing media outlets,” said the report by researchers from Stanford University, the University of Washington, the social network analysis firm Graphika and Atlantic Council’s DFRLab, which studies disinformation online around the world.

Straka said via email that nothing from the #WalkAway Campaign “encourages people not to vote.” He declined further comment.

While much of the material is coming from domestic sources such as Spanish-speaking social media “influencers,” it increasingly originating on online sites in Latin America, those studying it closely say.

Misinformation originally promoted in English is translated in Colombia, Brazil, Mexico, Nicaragua and elsewhere, then reaches Hispanic voters in the U.S. via communications from their relatives in those countries. That is often shared via private WhatsApp and Facebook chats and text chains.

“There’s this growing concern that this is very much part of the immigrant and first-generation information environment for a lot of Latinos in the United States,” said Dan Restrepo, former senior director for Western Hemisphere affairs at the National Security Council. “A lot of it is seemingly coming through family and other group chats, whose origins are in-region rather than the United States.”

WhatsApp and similar services are popular among Hispanics in the U.S. because the services allow for communicating with family and friends in Latin America free over the internet, avoiding costly long-distance charges. While those originating such campaigns in Latin America often cannot vote in the U.S., they can influence family in this country who do.

YouTube, Facebook and other social media companies have cracked down on false claims since before the election and intensified such efforts after online conspiracy theories helped incite the Trump loyalists who attacked the Capitol.

“We are running the largest online vaccine information campaign in history on our apps in dozens of languages, including Spanish,” said Kevin McAlister, a spokesman for Facebook which owns WhatsApp and Instagram. “We’ve removed millions of pieces of content on Facebook and Instagram that violate our COVID-19 and vaccine misinformation policies, and labeled more than 167 million pieces of COVID-19 content, including Spanish-language content.”

WhatsApp now limits users’ ability to send highly forwarded messages to more than one chat at a time; that led to a 70% reduction in the number of such messages. The company also partnered with Google to provide a feature allowing users to search the internet for the contents of forwarded messages to better check the veracity.

“The Spanish-language space has been a bit of a blind spot for researchers for awhile now,” said Bret Schafer, a disinformation expert at the Alliance for Securing Democracy, which works to combat online efforts to weaken democratic institutions. “This field exploded after 2016 and, the vast majority of us who are in it, more of us speak Russian than Spanish.”

With the election behind them, the proponents of these campaigns are now trying to spread chaos more broadly, notably by trying to create doubt about vaccines. That push is especially dangerous because Latinos have higher chances of being infected by, hospitalized from and dying of COVID-19 than do whites and African Americans or Asian Americans.

Her mother, Mercedes Vegvary, runs an elderly care facility in Northern California and spent weeks planning to forgo getting vaccinated against COVID-19 because a friend at a gym had showed her a video circulating on social media. In it, a woman wearing a lab coat and claiming to be a pharmacist in El Salvador says in Spanish that such vaccines aren’t safe for use in humans.

A video with a similar message appears to have originated in Panama, and another came from the Middle East but had been translated into Spanish. All moved into the U.S. via text chains or internet messaging from people with family and friends in Latin America, Kumar said.

One chain features doctored video of the late, Nobel Prize-winning chemist Kary Mullis purportedly dismissing Dr. Anthony Fauci, the top U.S. infectious disease expert, as a “phony who knows nothing about virology.” Another shows a crowded street that it claims is full of Italians flaunting social distancing and mask-wearing rules over the hashtag in Spanish #yonomevacuno” or “I won’t be vaccinated.”

The vaccine disinformation may revert to more election related falsehoods as the 2022 midterm elections come more clearly into view. Voto Latino and Perez have partnered with the liberal online watchdog group Media Matters for America on a $22 million “Latino Anti-Disinformation Lab” that will seek to counter online falsehoods about the coronavirus vaccine and upcoming elections.

Trump won about 35% support from Latino voters, according to VoteCast, an Associated Press survey of the national electorate. That helped him prevail in Florida and Texas, even as he became just the second Republican since 1948 to lose Arizona.

Kumar said that during the presidential race, misinformation in Spanish with Latin American roots would usually first hit Florida and “whatever sticks, spills over.” By mid-September, narratives had spread to Texas, popping up in Houston, San Antonio and the Rio Grande Valley, along the U.S.-Mexico border. By the week before the election, much had reached Arizona and New Mexico, she said.

Now researchers will be watching to see if misinformation — especially that meant to discredit COVID-19 vaccines — spreads among congressional districts. That could serve to ultimately discourage Latino turnout in the midterms.

Misinformation may have helped fuel significant gains in Latino support for Trump in some Venezuelan American and Colombian American areas, where voters were especially wary of claims that Biden was soft on socialism.

Biden won Florida’s heavily Hispanic, most populous county of Miami-Dade by only 7 percentage points compared with Hillary Clinton’s about 30-point victory in 2016, and precincts with large Colombian American and Venezuelan American populations were part of the reason why.

Biden prevailed about 25 miles to the north in Weston, Florida, which is part of Broward County and affectionately is known as Westonzuela because of its sizable Venezuelan immigrant population, but saw Trump narrow the gap in some precincts.

In Texas, Trump became the first Republican to carry sparsely populated Zapata County, on the U.S.-Mexico border, in a century and won 41% of the vote in Hidalgo County, the largest in the fast-growing Rio Grande Valley area, in 2020, compared with 28% in 2016.

That bump might be attributable to the heavy concentration of energy and law enforcement jobs in South Texas, and Trump’s promises to secure the border and promote fossil fuels. But misinformation also deeply penetrated the area, Perez said.

Evelyn Pérez-Verdía a Florida Democratic strategist who has been monitoring disinformation groups in Spanish, said that since the election, those spreading it have been watching the Biden administration daily and building false narratives around current events.

“The people who are making it have to understand the sub-cultures and cultures of the community,” Pérez-Verdía said.

Brazilian Americans, for instance, have gotten manipulated video from a Democratic presidential primary debate when Biden suggested he would raise $20 billion to help Brazil battle Amazon deforestation that makes it sound like Biden is ready to send U.S. troops into that country.

Misinformation has continued at such a furious pace post-election that 20-plus Latino progressive groups drafted a January letter declaring “No Más Lies, Disinformation and White Supremacy” that urged Spanish-language radio stations and other outlets in Florida to crack down on spreading it. Pérez-Verdía, one of the signees, said afterward that “it hasn’t dropped off. I consider now that it’s actually doubled down.”

In response to Russian meddling in the 2016 election, Congress approved $160 million for the State Department to lead efforts across the federal government to identify and counter foreign propaganda. Still, a 2018 report by the Senate Intelligence Committee found that such efforts had only increased following Election Day 2016 — a postelection pattern that is consistent with the one experts have tracked in Spanish after 2020’s vote.

So far, Congress isn’t investigating Spanish-language misinformation to see if its origins spread beyond Latin America.

“Was this a deliberate effort to suppress the votes of specific demographic groups? Was this orchestrated and funded by dark money groups or other organized actors?,” said Sen. Mark Warner, D-Va., chairman of the Senate Intelligence Committee. “These are all legitimate questions.”