The Northwest Side community of Jefferson Park is known as the gateway to Chicago, in part because it’s a transit hub, with Pace buses, Metra stations and the Blue Line coming together along a busy stretch of Milwaukee Avenue.

Nearby, the Kennedy Expressway slices through the area.

Some consider the area to be a typical Chicago bungalow belt. It’s predominantly middle class, but recently there’s been an uptick in homelessness. On Thursday, a coalition of groups held an outreach event at the Jefferson Park Transit Center. They gave out coffee and sandwiches, and helped connect people with services and hopefully, housing.

“We have an awesome collaborative group of people who want to improve the lives of all of our neighbors,” said Maggie Daly Skogsbakken, president of Jefferson Park Forward. “For us to preach that we want to be inclusive and embrace our diversity means we really need to walk the walk on that and we need to include our neighbors who are experiencing homelessness.”

State Rep. Lindsey LaPointe says Springfield needs to stay focused on this issue, and wants to see more rental assistance and affordable housing. But she says neighbors in Jefferson Park aren’t waiting for someone to come in and tackle the problem.

“I have seen an incredible willingness to help. The biggest barrier for people helping and sharing the resources they have – which generally in this neighborhood isn’t a lot, we don’t have a lot of very wealthy people– but as long as people know how to help they will step up in two seconds and help their neighbors, perhaps their neighbors who they’ve never met,” LaPointe said.

That’s not the only way neighbors look out for each other. Olive’s Garden for the Hungry started in 2007. It’s named after a late neighbor across the street who provided the garden water in its early days. It’s got a small library and pantry year-round. In the warmer months, volunteers grow and donate fresh produce for neighbors facing food insecurity.

“We’re getting about 150 pounds of produce in about eight weeks,” all of which gets donated, said William Zelenka, one of the people who runs the garden. “We’re basically self-funded, which is nice.”

The garden isn’t just crops – there’s some wildlife, too.

“For the last three years, I've been taking care of the bees we have at the garden, not only for pollinating the garden but also for the honey that we get,” said Brian Wardman of the Jefferson Park Neighborhood Association.

Supporters say the garden’s mission is reflective of the neighborhood. “Anyone here in our neighborhood, we all want to work together. We help each other out, and that's very important. It gives community spirit,” said Eva Skowronski of the Jefferson Park Neighborhood Association.

One of Jefferson Park’s major events takes place every Labor Day: the annual Taste of Polonia festival hosted by the Copernicus Center, where you can dance along as dozens of bands play, or munch on pierogi.

“Last year we couldn’t do it due to obvious reasons, but we’re coming up on our 50th anniversary. We’re optimistic, but on the other hand very concerned that we’re not the big spread event so that’s still on hold at this point,” said Zenon Kurdziel, a board member of the Copernicus Center.

The center’s a Polish heritage and arts organization, but Kurdziel says really, it’s a living breathing part of the Jefferson Park Community. The center is trying to use the downtime wisely – making sure every fixture, down to the nuts and bolts, is cleaned and polished.

Another piece of Jefferson Park history is its former firehouse. Built in 1906, it was the first firehouse protecting the Northwest Side. It’s been vacant for a decade, but on Wednesday the Chicago City Council approved a plan to redevelop the building with apartments and Lake Effect Brewing on the ground floor. That’s welcome news to neighbors who fear this already rundown building is deteriorating every day.

“We have very few elements that are left that are reflective of our history,” said Susanna Ernst of the Northwest Chicago Historical Society. “This particular building, as well as some others in the community, that are still left … are buildings that should be preserved so people have ties to their past, so people can feel like they belong to a community that has a history in the historic fabric of Chicago and the Northwest Side.”

The Gale Street Inn on Milwaukee Avenue, across from the Jefferson Park Transit Center, has been a neighborhood mainstay for decades. But owner George Karzas isn't focusing on the past.

“Jefferson Park is up and coming. It’s on the rise,” Karzas said. “We’re going to come out of this looking a little bit newer than what the older model was. I’m not waiting for anything to come back. I’m looking forward.”

Still, even with indoor dining now allowed, as long as another round of paycheck protection program funds comes through, he plans to continue with curbside service only until it’s warm enough to open for patio dining in the spring.

State Sen. Robert Martwick is one of the area’s lawmakers in the General Assembly, and he knows well the difficult financial situation the pandemic has placed Illinois in. He says without federal aid to state and local governments, his constituents and many others statewide will feel the pinch.

“(It would put) us back to those years under the Rauner administration where we had massive budget shortfalls and critical, essential services for people who most need government’s help will go without,” Martwick said. But he’s hopeful the Biden administration and the new Congress will work out a deal for local government stimulus money. “The federal government is perfectly situated to give that aid to us. That’s why we have a federal government in the first place. This will help shore up communities, keep property taxes down, and make sure that essential services are delivered to the people who need them.”

Many of whom live in Jefferson Park and other Chicago area communities. One of the members of the coalition that’s working to help people experiencing homelessness in the area is Eden United Church of Christ. Its pastor, the Rev. Jacki Belile, says community members are putting aside differences to tackle pressing problems.

“We’re really focused on building relationships in a way that honors sharing stories and respecting other people's values,” Belile said. “We may not agree on everything, but my congregation is leading the way with other neighborhood organizations who care about bringing people together, to solve problems even when we don't agree on everything.” 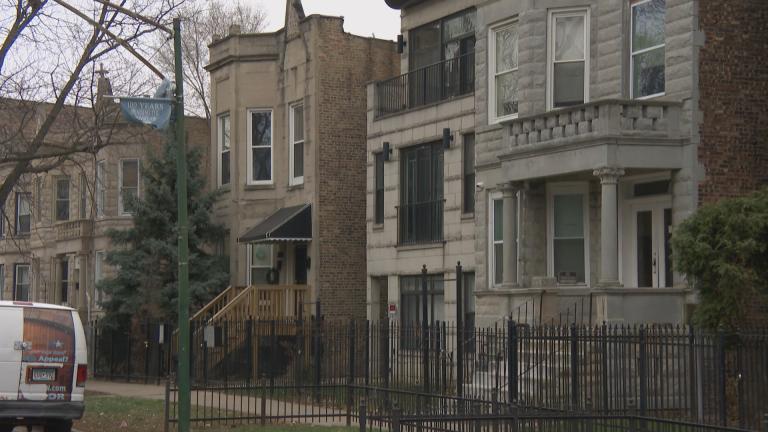