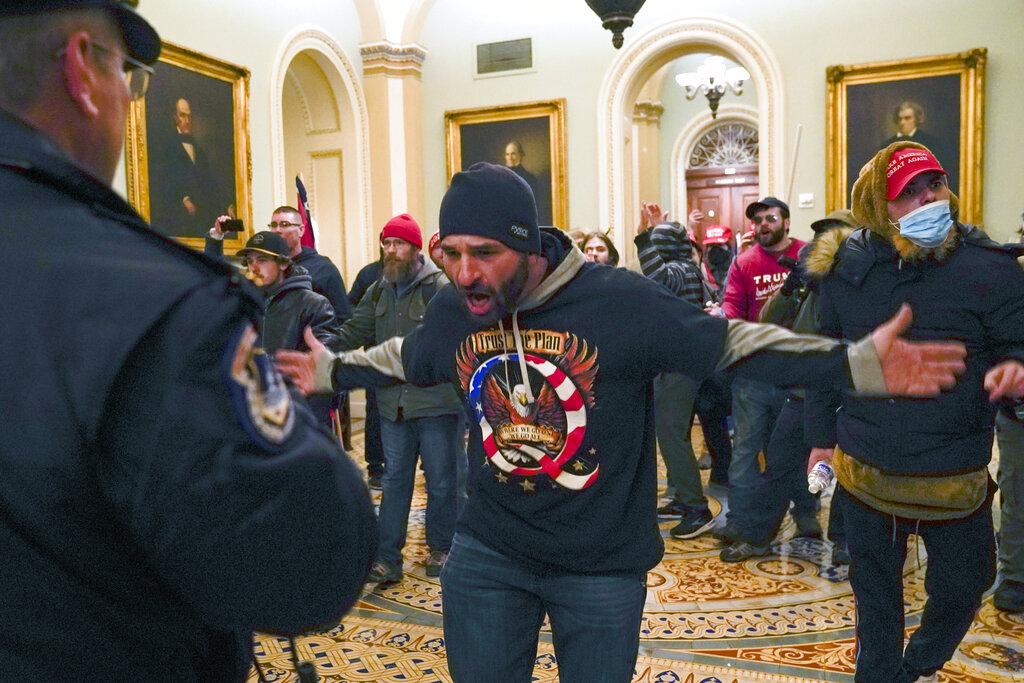 Protesters gesture to U.S. Capitol Police in the hallway outside of the Senate chamber at the Capitol in Washington, Wednesday, Jan. 6, 2021, near the Ohio Clock. (AP Photo / Manuel Balce Ceneta)

WASHINGTON (AP) — “Where are they?” a Trump supporter demanded in a crowd of dozens roaming the halls of the Capitol, bearing Trump flags and pounding on doors.

They — lawmakers, staff members and more — were hiding under tables, hunkered in lockdowns, saying prayers and seeing the fruits of the country’s divisions up close and violent.

Guns were drawn. A woman was shot and killed by police, and three others died in apparent medical emergencies. A Trump flag hung on the Capitol. The graceful Rotunda reeked of tear gas. Glass shattered.

On Wednesday, hallowed spaces of American democracy, one after another, yielded to the occupation of Congress.

The pro-Trump mob took over the presiding officer’s chair in the Senate, the offices of the House speaker and the Senate dais, where one yelled, “Trump won that election.”

They mocked its leaders, posing for photos in the office of House Speaker Nancy Pelosi, one with his feet propped on a desk in her office, another sitting in the same seat Vice President Mike Pence had occupied only moments before during the proceedings to certify the Electoral College vote.

This began as a day of reckoning for President Donald Trump’s futile attempt to cling to power as Congress took up the certification of President-elect Joe Biden’s victory. It devolved into scenes of fear and agony that left a prime ritual of American democracy in tatters.

Trump told his morning crowd at the Ellipse that he would go with them to the Capitol, but he didn’t. Instead he sent them off with incendiary rhetoric.

“If you don’t fight like hell, you’re not going to have a country anymore,” he said. “Let the weak ones get out,” he went on. “This is a time for strength.”

His lawyer, Rudy Giuliani, told the crowd, “Let’s have trial by combat.”

What happened Wednesday was nothing less than an attempted coup, said Rep. Diana DeGette, D-Colo. Sen. Ben Sasse, R-Neb., a frequent Trump critic, said, “Today, the United States Capitol — the world’s greatest symbol of self-government — was ransacked while the leader of the free world cowered behind his keyboard.”

Sasse went on: “Lies have consequences. This violence was the inevitable and ugly outcome of the president’s addiction to constantly stoking division.” 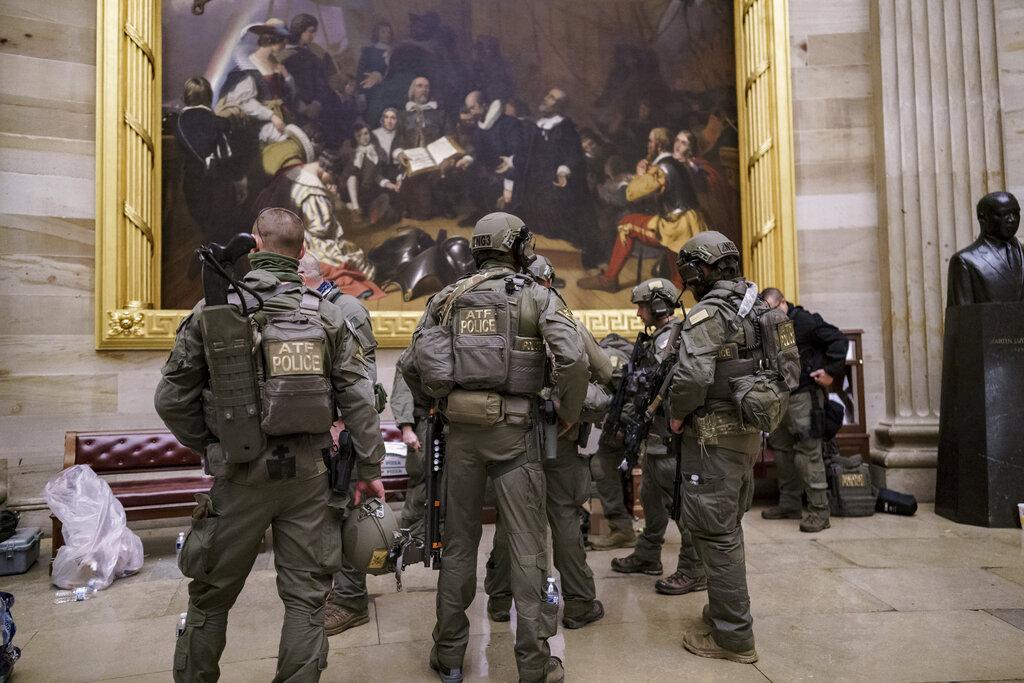 After violent protesters loyal to President Donald Trump stormed the U.S. Capitol, a tactical team with ATF gathers in the Rotunda to provide security for the continuation of the joint session of the House and Senate to count the Electoral College votes cast in November’s election, at the Capitol in Washington, Wednesday, Jan. 6, 2021. (AP Photo / J. Scott Applewhite)

Yet Trump, in a video posted 90 minutes after lawmakers were evacuated, told the insurrectionists “We love you. You’re very special,” while asking them to go home.

Heavily armed officers brought in as reinforcements started using tear gas in a coordinated effort to get people moving toward the door, then combed the halls for stragglers, pushing the mob farther out onto the plaza and lawn, in clouds of tear gas, flash-bangs and percussion grenades.

Video footage also showed officers letting people calmly walk out the doors of the Capitol despite the rioting and vandalism. Only about a dozen arrests were made in the hours after authorities regained control. They said a woman was shot earlier as the mob tried to break through a barricaded door in the Capitol where police were armed on the other side.

She was hospitalized with a gunshot wound and later died.

Early on, some inside the Capitol saw the trouble coming outside the windows. Democratic Rep. Dean Phillips of Minnesota surveyed the growing crowd on the grounds not long after Trump had addressed his supporters by the Ellipse, fueling their grievances over an election that he and they say he won, against all evidence.

“I looked out the windows and could see how outmanned the Capitol Police were,” Phillips said. Under the very risers set up for Biden’s inauguration, Trump supporters clashed with police who blasted pepper spray in an attempt to hold them back.

It didn’t work. Throngs of maskless MAGA-hatted demonstrators tore down metal barricades at the bottom of the Capitol’s steps. Some in the crowd were shouting “traitors” as officers tried to keep them back. They broke into the building. 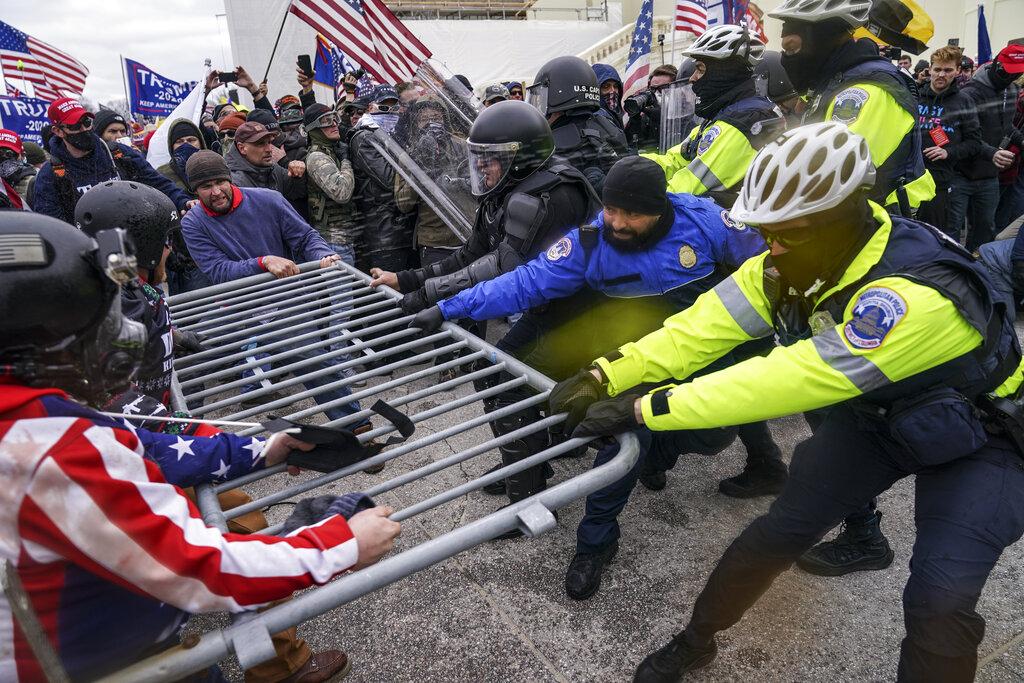 Trump supporters try to break through a police barrier, Wednesday, Jan. 6, 2021, at the Capitol in Washington. (AP Photo / John Minchillo)

Announcements blared: Due to an “external security threat,” no one could enter or exit the Capitol complex, the recording said. A loud bang sounded as officials detonated a suspicious package to make sure it was not dangerous.

It was about 1:15 p.m. when New Hampshire Rep. Chris Pappas, a Democrat, said Capitol Police banged on his door and “told us to drop everything, get out as quickly as we could.”

“It was breathtaking how quickly law enforcement got overwhelmed by these protesters,” he told The Associated Press.

Shortly after 2 p.m., Republican Sen. Chuck Grassley of Iowa and Vice President Mike Pence were evacuated from the Senate as protesters and police shouted outside the doors.

“Protesters are in the building,” were the last words picked up by a microphone carrying a live feed of the Senate before it shut off.

Police evacuated the chamber at 2:30 p.m., grabbing boxes of Electoral College certificates as they left.

Phillips yelled at Republicans, “This is because of you!”

Rep. Scott Peters, D-Calif., told reporters he was in the House chamber when protesters began storming it. He said security officers urged lawmakers to put gas masks on and herded them into a corner of the massive room.

“When we got over to other side of the gallery, the Republican side, they made us all get down, you could see that they were fending off some sort of assault, it looked like,” he said. “They had a piece of furniture up against the door, the door, the entry to the floor from the Rotunda, and they had guns pulled.” The officers eventually escorted the lawmakers out of the chamber.

Shortly after being told to put on gas masks, most members were quickly escorted out of the chamber. But some members remained in the upper gallery seats, where they had been seated due to distancing requirements. 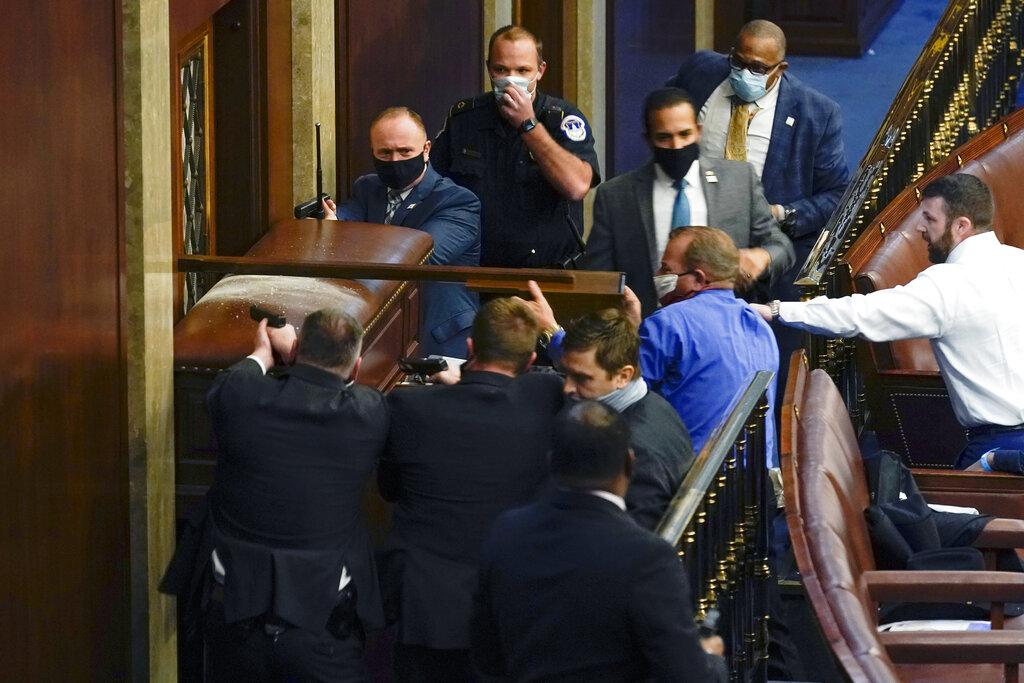 U.S. Capitol Police with guns drawn stand near a barricaded door as protesters try to break into the House Chamber at the U.S. Capitol on Wednesday, Jan. 6, 2021, in Washington. (AP Photo / Andrew Harnik)

Along with a group of reporters who had been escorted from the press area and Capitol workers who act as ushers, the members ducked on the floor as police secured a door to the chamber down below with guns pointed. After making sure the hallways were clear, police swiftly escorted the members and others down a series of hallways and tunnels to a cafeteria in one of the House office buildings.

Describing the scene, Democratic Rep. Jim Himes of Connecticut said “there was a point there where officers had their guns and weapons pointed at the door, they were obviously expecting a breach through the door. It was clear that there were pretty close to pulling the trigger so they asked us all to get down in the chamber.”

As he walked out of the Capitol, Himes said he had lived in Latin America and “always assumed it could never happen here.

“We’ve known for years that our democracy was in peril and this is hopefully the worst and final moment of it,” Himes said. “But with a president egging these people on, with the Republicans doing all they can to try to make people feel like their democracy has been taken away from them even though they’re the ones doing the taking, it’s really hard, really sad. I spent my entire political career reaching out to the other side. And it’s really hard to see this.”

Democratic Illinois Rep. Mike Quigley was also in the balcony. “It’s not good to be around terrified colleagues, with guns drawn toward people who have a barricade … people crying. Not what you want to see,” he said.

“This is how a coup is started,” said Rep. Jimmy Gomez, D-Calif. “This is how democracy dies.”