Plus: ‘Chicago Tonight’ on the Electoral College process

Video: The Electoral College process and next steps. A “Chicago Tonight” conversation with James Lindley Wilson of the University of Chicago and Steven Schwinn of UIC John Marshall Law School.

WASHINGTON (AP) — The Electoral College decisively confirmed Joe Biden on Monday as the nation’s next president, ratifying his November victory in an authoritative state-by-state repudiation of President Donald Trump’s refusal to concede he had lost.

The presidential electors gave Biden a solid majority of 306 electoral votes to Trump’s 232, the same margin that Trump bragged was a landslide when he won the White House four years ago.

Heightened security was in place in some states as electors met to cast paper ballots, with masks, social distancing and other pandemic precautions the order of the day. The results will be sent to Washington and tallied in a Jan. 6 joint session of Congress over which Vice President Mike Pence will preside.

For all Trump’s unsupported claims of fraud, there was little suspense and no change as every one of the electoral votes allocated to Biden and the president in last month’s popular vote went officially to each man. On Election Day, the Democrat topped the incumbent Republican by more than 7 million in the popular vote nationwide.

“Once again in America, the rule of law, our Constitution, and the will of the people have prevailed. Our democracy — pushed, tested, threatened — proved to be resilient, true, and strong,” Biden said in an evening speech  in which he stressed the size of his win and the record 81 million people who voted for him. 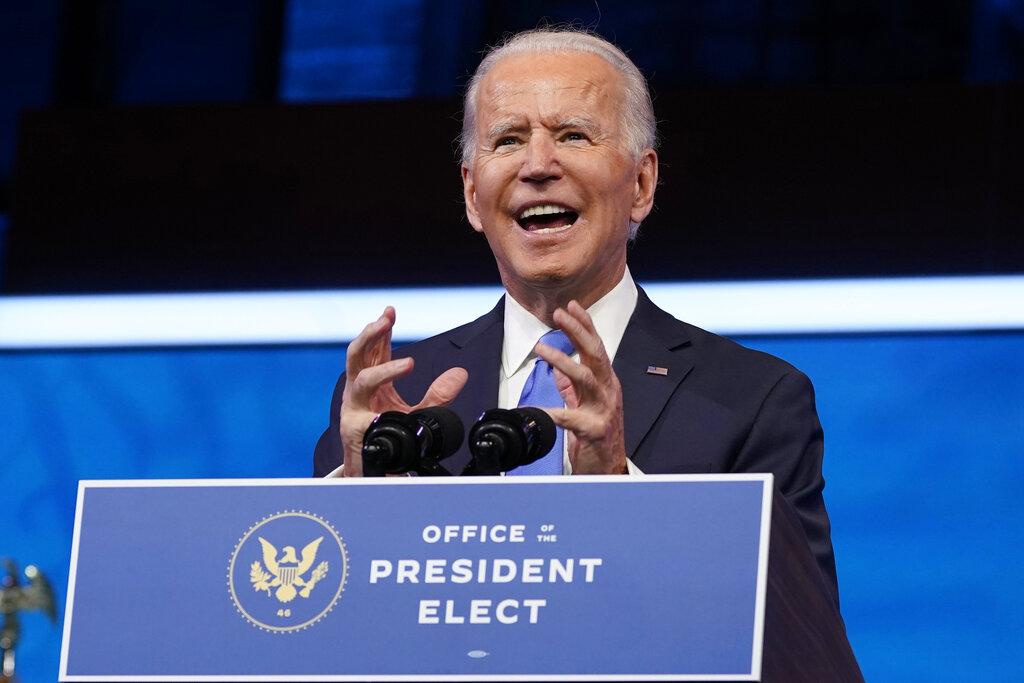 He renewed his campaign promise to be a president for all Americans, whether they voted for him or not, and said the country has hard work ahead on the virus and economy.

But there was no concession from the White House, where Trump has continued to make unsupported allegations of fraud.

Trump remained in the Oval Office long after the sun set in Washington, calling allies and fellow Republicans while keeping track of the running Electoral College tally, according to White House and campaign aides. The president frequently ducked into the private dining room off the Oval Office to watch on TV, complaining that the cable networks were treating it like a mini-Election Night while not giving his challenges any airtime.

The president had grown increasingly disappointed with the size of “Stop the Steal” rallies across the nation as well as efforts for the GOP to field its own slates of electors in states. A presidential wish for a fierce administration defense led to TV appearances early Monday by Stephen Miller, one of his most ferocious advocates, to try to downplay the importance of the Electoral College vote and suggest that Trump’s legal challenges would continue all the way to Inauguration Day on Jan. 20.

Late in the day, he took to Twitter to announce that  Attorney General William Barr was leaving the administration before Christmas. Barr’s departure comes amid lingering tension over Trump’s unsupported fraud claims, especially after Barr’s statement this month to The Associated Press that the election results were unaffected by any fraud.

In a Fox News interview taped over the weekend, Trump said that “I worry about the country having an illegitimate president, that’s what I worry about. A president that lost and lost badly.”

On Monday in Arizona, Georgia, Michigan, Nevada, Pennsylvania and Wisconsin — the six battleground states that Biden won and Trump contested — electors gave Biden and Vice President-elect Kamala Harris their votes in low-key proceedings. Nevada’s electors met via Zoom because of the coronavirus pandemic.

Trump’s efforts to undermine the election results also led to concerns about safety for the electors, virtually unheard of in previous years. In Michigan, lawmakers from both parties reported receiving threats, and legislative offices were closed over threats of violence. Biden won the state by 154,000 votes, or 2.8 percentage points, over Trump.

Georgia state police were out in force at the state Capitol in Atlanta before Democratic electors pledged to Biden met. There were no protesters seen.

Even with the Electoral College’s confirmation of Biden’s victory, some Republicans continued to refuse to acknowledge that reality. Yet their opposition to Biden had no practical effect on the electoral process, with the Democrat to be sworn in next month. 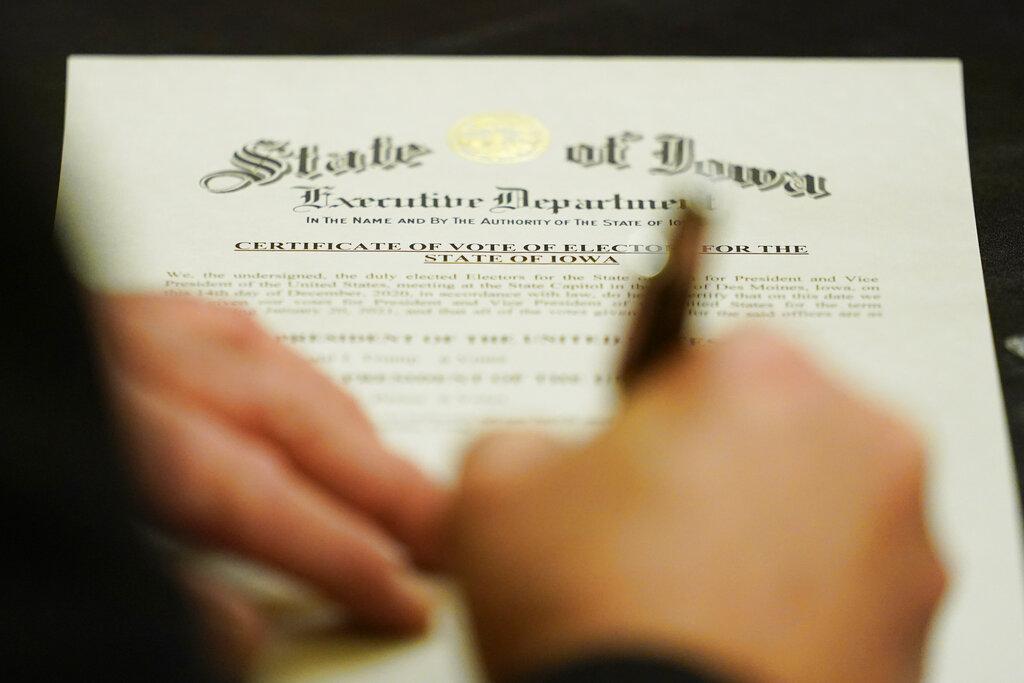 A member of Iowa’s Electoral College signs the Certificate of Vote of Electors for the State of Iowa, Monday, Dec. 14, 2020, at the Statehouse in Des Moines, Iowa. (AP Photo / Charlie Neibergall)

Republicans who would have been Trump electors met anyway in a handful of states Biden won. Pennsylvania Republicans said they cast a “procedural vote” for Trump and Pence in case courts that have repeatedly rejected challenges to Biden’s victory were to somehow still determine that Trump had won.

In North Carolina, Utah and other states across the country where Trump won, his electors turned out to duly cast their ballots for him. Electors in North Carolina had their temperatures checked before being allowed to enter the Capitol to vote. Utah Attorney General Sean Reyes withdrew as a Trump elector and was in quarantine because he was exposed to someone with COVID-19.

Former President Bill Clinton and former Secretary of State Hillary Clinton, whom Trump defeated four years ago, were among New York’s 29 electors for Biden and Harris.

In New Hampshire, before the state’s four electors voted for Biden at the State House in Concord, 13-year-old Brayden Harrington led the group in the Pledge of Allegiance. He had delivered a moving speech at the Democratic National Convention in August about the struggle with stuttering he shares with Biden.

Following weeks of Republican legal challenges that were easily dismissed by judges, Trump and Republican allies tried to persuade the Supreme Court last week to set aside 62 electoral votes for Biden in four states, which might have thrown the outcome into doubt.

The justices rejected the effort on Friday.

The Electoral College was the product of compromise during the drafting of the Constitution between those who favored electing the president by popular vote and those who opposed giving the people the power to directly choose their leader.

Each state gets a number of electors equal to its total number of seats in Congress: two senators plus however many members the state has in the House of Representatives. Washington, D.C., has three votes, under a constitutional amendment that was ratified in 1961. With the exception of Maine and Nebraska, states award all their Electoral College votes to the winner of the popular vote in their state.

The bargain struck by the nation’s founders has produced five elections in which the president did not win the popular vote. Trump was the most recent example in 2016.