Video: Both Facebook and Twitter took new efforts this year to try to moderate disinformation around the 2020 election, but it hasn’t been enough. Facebook CEO Mark Zuckerberg and Twitter CEO Jack Dorsey faced questions from Congress on Tuesday. Nick Feamster, a professor in the computer science department at the University of Chicago, weighs in on that and more. (Produced by Paul Caine)

WASHINGTON (AP) — As the CEOs of Twitter and Facebook gave assurances of vigorous action against election disinformation, Republicans at a Senate hearing Tuesday pounded the social media companies over political bias, business practices and market dominance, laying the ground for curbs on their long-held legal protections.

Twitter’s Jack Dorsey and Facebook’s Mark Zuckerberg defended at the Senate Judiciary Committee hearing the safeguards against the use of their platforms to spread falsehoods and incite violence in the contest between President Donald Trump and Democrat Joe Biden.

Responding to concern from Democrats on the panel, they pledged continued vigorous action for two special elections in Georgia that could determine in January which party controls the U.S. Senate.

Republican senators, including Committee Chairman Sen. Lindsey Graham, revived complaints of censorship and anti-conservative bias against the social media platforms. They were reticent to address head-on the issue of election disinformation, an awkward topic for Republicans given that many of them have refused to knock down Trump’s unfounded claims of voting irregularities and fraud, even as misinformation disputing Biden’s victory has flourished online.

The actions that Twitter and Facebook took to quell the spread of disinformation angered Trump and his supporters.

Different grievances but a common adversary. Democrats, including President-elect Biden, also call for stripping away some of the protections that have shielded tech companies from legal responsibility for what people post.

They have focused their concern on hate speech and incitement on social media platforms that can spawn violence.

Sen. Mazie Hirono, a Democrat from Hawaii, asked Zuckerberg: “At what point will you stop giving in to baseless claims of anti-conservative bias and start exercising your control over Facebook to stop driving division?”

Graham pushed the case for Congress to curb the tech companies’ legal shield. “I think there’s Republican and Democrat concern about the power that’s being used by social media outlets to tell us what we can see and what we can’t, what’s true and what’s not,” Graham said.

Republicans and Democrats also are making common cause on Big Tech’s market dominance, endorsing stronger enforcement of antitrust laws and for some, the breakup of giants like Facebook and Google.

“Your companies are the most powerful in the world,” Sen. Josh Hawley, a Missouri Republican, told Dorsey and Zuckerberg.

“It is time we took action against these modern-day robber barons,” Hawley said, referring to the 19th century industrial moguls whose ruthless practices built fortunes.

Hawley exulted in a tweet: “Under oath, Zuckerberg admits Facebook DOES have ‘tools’ to track its users across the internet, across platforms, across accounts — all without user knowledge. I ask how many times this tool has been used domestically against Americans. Zuck won’t say.”

Zuckerberg, fending off Hawley’s accusations that Facebook coordinates its content moderation policies with rivals such as Google, said “We do coordinate and share on security-related topics” such as terrorism and foreign government influence — but not on policing content.

Despite fears over security in the runup to Election Day and social media companies bracing for the worst, the election turned out to be the most secure in U.S. history, federal and state officials from both parties say — repudiating Trump’s unsubstantiated claims of fraud.

Twitter and Facebook have both slapped a misinformation label on some content from Trump, most notably his assertions linking voting by mail to fraud. On Monday, Twitter flagged Trump’s tweet proclaiming “I won the Election!” with this note: “Official sources called this election differently.

Twitter has in many cases prevented users from retweeting Trump’s tweets, while Facebook allows its users to continue sharing Trump’s false claims.

Dorsey and Zuckerberg testified to the hearing via video. Dorsey said that Twitter flagged some 300,000 tweets between Oct. 27 and Nov. 11 for content that was disputed and potentially misleading, representing 0.2% of all U.S. election-related tweets sent during the period.

Zuckerberg said Facebook joined with election officials to remove false claims about polling conditions and displayed warnings on more than 150 million pieces of content after review by independent fact-checkers. Facebook also prohibited misrepresentations about how or when to vote as well as attempts to use threats on the coronavirus to scare people into not voting, he said.

Facebook moved two days after the election to ban a large group called “Stop the Steal” that Trump supporters were using to organize protests against the vote count. The 350,000-member group echoed Trump’s baseless allegations of a rigged election rendering the results invalid.

For days after the election as the vote counting went on, copycat “Stop the Steal” groups were easily found on Facebook. As of Monday, Facebook appeared to have made them harder to find, though it was still possible to locate them, including some groups with thousands of members. 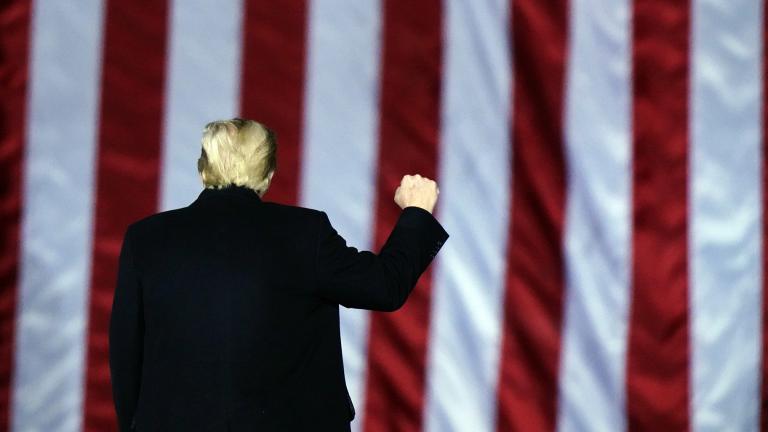 A Farewell to @realDonaldTrump, Gone After 57,000 Tweets 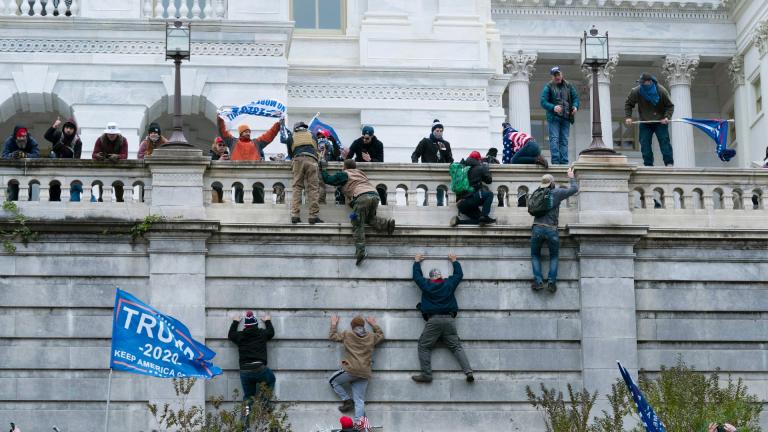