Fraud Claims Aimed in Part at Keeping Trump Base Loyal

WASHINGTON (AP) — The Trump campaign’s strategy to file a barrage of lawsuits challenging President-elect Joe Biden’s win is more about providing President Donald Trump with an off-ramp for a loss he can’t quite grasp and less about changing the election’s outcome, according to senior officials, campaign aides and allies who spoke to The Associated Press.

Trump has promised legal action in the coming days as he refused to concede his loss to Biden, making an aggressive pitch for donors to help finance any court fight. Trump and his campaign have leveled accusations of large-scale voter fraud in Pennsylvania and other states that broke for Biden, so far without proof.

But proof isn’t really the point, said the people. The AP spoke with 10 Trump senior officials, campaign aides and allies who were not authorized to discuss the subject publicly and spoke on condition of anonymity.

Trump aides and allies also acknowledged privately the legal fights would — at best — forestall the inevitable, and some had deep reservations about the president’s attempts to undermine faith in the vote. But they said Trump and a core group of allies were aiming to keep his loyal base of supporters on his side even in defeat.

There has been no presidential election in recent memory in which such widespread fraud was alleged. The closest was the 1960 election in which Democrat John F. Kennedy beat Republican Richard Nixon, and there were scattered allegations that fraud helped Kennedy win.

Moments after the AP called the race for Biden, Trump attorney Rudy Giuliani stood in front of campaign banner taped over the garage door of a landscaping company in Philadelphia, wedged near a cremation center and an adult book store called “Fantasy Island,” with a handful of poll watchers and declared they’d been kept too far away to check for any inaccuracies. Something fishy was going on, he said.

“We have no way of knowing, because we’ve been deprived of the right to inspect ballots,” he said. 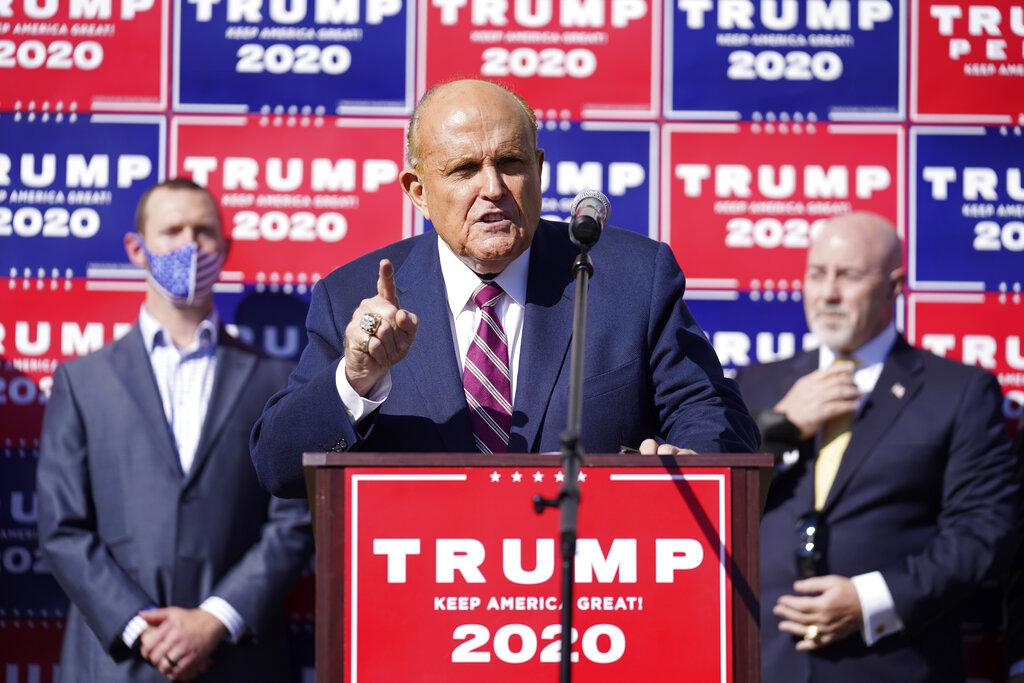 Partisan poll watchers are designated by a political party or campaign to report any concerns they may have. They are not poll workers who actually tally ballots. Monitoring polling places and election offices is allowed in most states, but rules vary and there are certain limits to avoid any harassment or intimidation. They are not allowed to interfere with the conduct of the election and are typically required to register in advance with the local election office.

This year, because of the coronavirus that has killed more than 230,000 people across the country, there was litigation in a few states, including Pennsylvania, over where poll watchers could stand to ensure social distancing.

Lawyers could potentially argue the vote tally should be cast aside over fraud observed by poll watchers, but in order to win that argument they’d need strong evidence, not just allegations the monitors weren’t allowed to see clearly enough. Judges are loathe to disenfranchise any voters and there would need to be substantial proof that fraud had so damaged the count it must be set aside. And it would have to happen across multiple states.

Democratic poll watchers, who were also given the same access, have not raised concerns. Giuliani called evidence of fraud circumstantial at the news conference. He said he’d be filing suit in federal court, but the issue has already been before judges.

A federal judge in Philadelphia Thursday night ordered the two sides to work out an agreement on the number of poll watchers and how close they could be to the counting. The judge also voiced concerns about the safety of poll workers during the pandemic if poll watchers were allowed to peer over their shoulders.

On Fox News Channel’s “Sunday Morning Futures” Sunday, Giuliani said two additional lawsuits were in the process of being drafted, in addition to existing litigation in Pennsylvania.

By the end of this week, Giuliani predicted the campaign would have filed “four or five” lawsuits, with a total of 10 possible. Republican lawyers planned a Monday news conference to announce additional litigation.

Voter fraud is extremely rare, and when it does happen, people are generally caught and prosecuted and it does not change the outcome of the election. Typically, it involves someone wanting to honor the wishes of a loved one who recently died and either knowingly or not commits a crime by filling out that ballot.

Trump campaign officials have also alleged that more than 21,000 had been cast in the name of the dead in Pennsylvania. The claims stem from a conservative legal group’s lawsuit against the Secretary of State, accusing her of wrongly including some 21,000 supposedly dead residents on voter rolls.

The federal judge who has the case, John Jones, has said he was doubtful of the claims. He said the Public Interest Legal Foundation that brought the claims was asking the court to accept that there were dead people on voter rolls, and he asked for proof and questioned why they had waited until the “eleventh hour” to file suit.

“We cannot and will not take plaintiff’s word for it —in an election where every vote matters, we will not disenfranchise potentially eligible voters based solely upon the allegations of a private foundation,” he wrote in an Oct. 20 ruling.

But even if those 21,000 votes were to be cast aside, Biden would still lead the state by more than 20,000 votes, according to AP data.

Trump’s own administration has pushed back at the claims of widespread voter fraud and illegal voting though it didn’t mention Trump was the one making the allegations. The Cybersecurity and Infrastructure Security Agency, the federal agency that oversees U.S. election security, also noted local election offices have detection measures that “make it highly difficult to commit fraud through counterfeit ballots.”

Top election officials in the battleground states of Arizona, Georgia, Michigan, Pennsylvania and Nevada - both Republican and Democrat - have all said they see no widespread voting irregularities, no major instances of fraud or illegal activity.

Meanwhile, on a call with supporters Saturday, Trump campaign manager Bill Stepien encouraged them to be ready to continue the fight for Trump, including standing by for rallies and demonstrations. Other aides outlined what they argued were irregularities in the count.

And Republicans were sticking to the idea that all “legal” votes must be counted — the language freighted with a clear implication that Democrats want illegal votes counted, a claim for which there is no evidence.

It’s a precarious balance for Trump’s allies as they try to be supportive of the president — and avoid risking further fallout — but face the reality of the vote count.

According to one Republican granted anonymity to discuss the private conversation, Republicans on Capitol Hill were giving Trump the space to consider all legal options, and allowing the process to play out.

Senate Majority Leader Mitch McConnell has not yet made any public statements — neither congratulating Biden nor joining Trump’s complaints about the results.

It was a view being echoed by several other Republicans neither supporting or rejecting the outcome.

“Nothing that I’ve seen regarding the election raises a legal issue that could succeed. There is just is nothing there,” said Barry Richard, who represented George W. Bush in the 2000 recount in Florida that ended up before the U.S. Supreme Court. “When these kind of lawsuits are filed it just breeds contempt for the whole legal system,” he said.