WASHINGTON (AP) — President Donald Trump’s campaign filed lawsuits Wednesday in Pennsylvania, Michigan and Georgia, laying the groundwork for contesting battleground states as he slipped behind Democrat Joe Biden in the hunt for the 270 Electoral College votes needed to win the White House.

The new filings, joining existing Republican legal challenges in Pennsylvania and Nevada, demand better access for campaign observers to locations where ballots are being processed and counted, and absentee ballot concerns, the campaign said. However, at one Michigan location in question The Associated Press observed poll watchers from both sides monitoring on Wednesday.

The AP called Michigan for Democrat Joe Biden on Wednesday. Nevada, Pennsylvania and Georgia are undecided.

The Trump campaign also is seeking to intervene in a Pennsylvania case at the Supreme Court that deals with whether ballots received up to three days after the election can be counted, deputy campaign manager Justin Clark said.

The actions reveal an emerging legal strategy that the president had signaled for weeks, namely that he would attack the integrity of the voting process in states where the result could mean his defeat.

His campaign also announced that it would ask for a recount in Wisconsin, a state the AP called for Biden on Wednesday afternoon. Campaign manager Bill Stepien cited “irregularities in several Wisconsin counties,” without providing specifics.

Biden said Wednesday the count should continue in all states, adding, “No one’s going to take our democracy away from us — not now, not ever.”

Campaign spokesman Andrew Bates said legal challenges were not the behavior of a winning campaign.

“What makes these charades especially pathetic is that while Trump is demanding recounts in places he has already lost, he’s simultaneously engaged in fruitless attempts to halt the counting of votes in other states in which he’s on the road to defeat,” Bates said in a statement.

Election officials continued to count votes across the country, the normal process on the day following voting. Unlike in previous years, states were contending with an avalanche of mail ballots driven by fears of voting in person during a pandemic. At least 103 million people voted early, either by mail or in-person, representing 74% of the total votes cast in the 2016 presidential election.

Every election, results reported on election night are unofficial and the counting of ballots extends past Election Day. Mail ballots normally take more time to verify and count. This year, because of the large numbers of mail ballots and a close race, results were expected to take longer.

The Trump campaign said it is calling for a temporary halt in the counting in Michigan and Pennsylvania until it is given “meaningful” access in numerous locations and allowed to review ballots that already have been opened and processed.

The AP’s Michigan call for Biden came after the suit was filed. The president is ahead in Pennsylvania but his margin is shrinking as more mailed ballots are counted.

There have been no reports of fraud or any type of ballot concerns out of Pennsylvania. The state had 3.1 million mail-in ballots that take time to count and an order allows them to be received and counted up until Friday if they are postmarked by Nov. 3.

Pennsylvania Attorney General Josh Shapiro said in a CNN interview the lawsuit was “more a political document than a legal document.”

“There is transparency in this process. The counting has been going on. There are observers observing this counting, and the counting will continue,” he said. 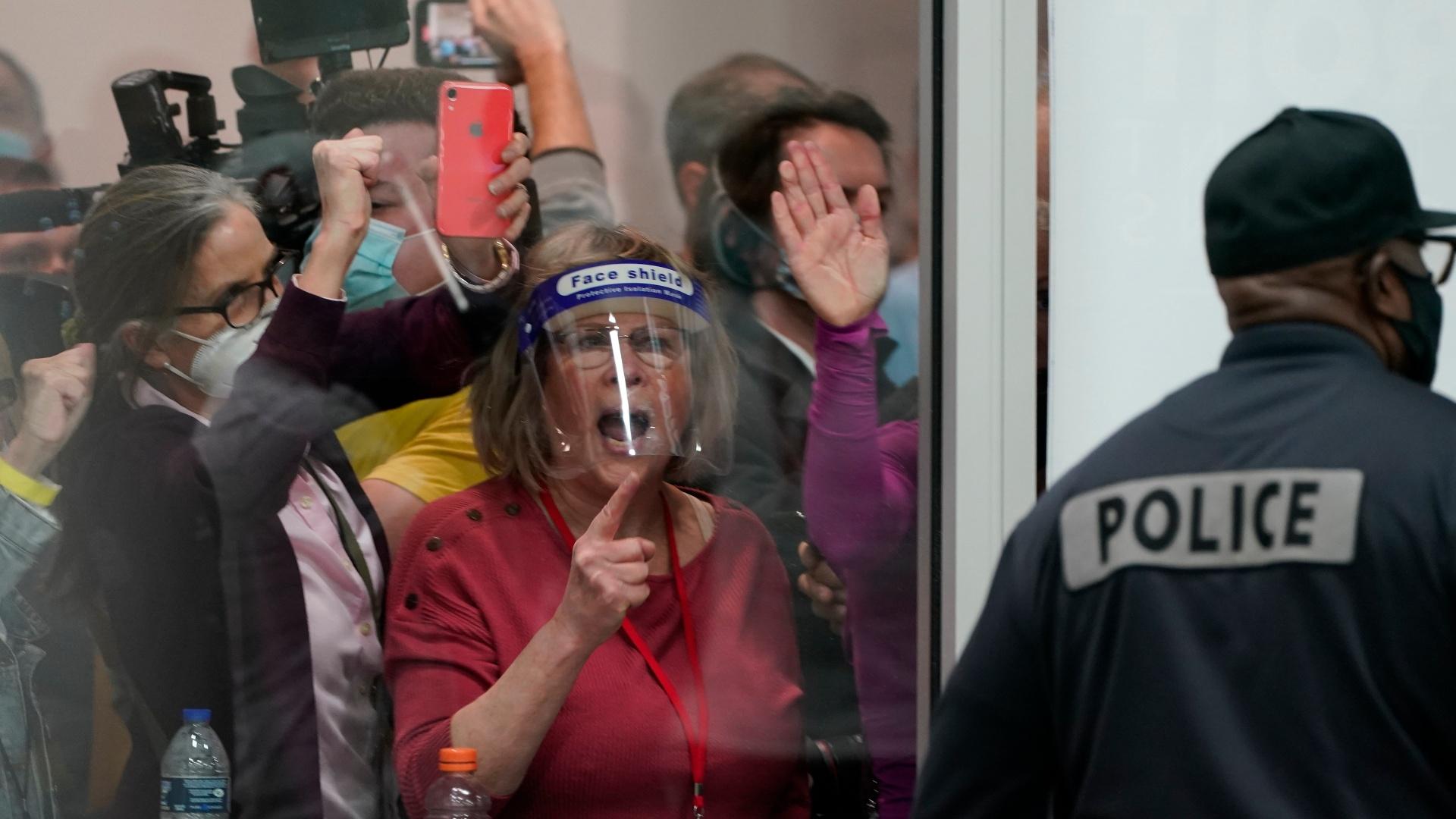 Election challengers yell as they look through the windows of the central counting board as police were helping to keep additional challengers from entering due to overcrowding, Wednesday, Nov. 4, 2020, in Detroit. (AP Photo / Carlos Osorio)

The Michigan lawsuit claims Secretary of State Jocelyn Benson, a Democrat, was allowing absentee ballots to be counted without teams of bipartisan observers as well as challengers. She’s accused of undermining the “constitutional right of all Michigan voters...to participate in fair and lawful elections.” Michigan Democrats said the suit was a longshot.

Poll watchers from both sides were plentiful Wednesday at one major polling place in question — the TCF Center in Detroit, The Associated Press observed. They checked in at a table near the entrance to the convention center’s Hall E and strolled among the tables where ballot processing was taking place. In some cases, they arrived en masse and huddled together for a group discussion before fanning out to the floor. Uniformed Detroit police officers were on hand to make sure everyone was behaving.

Mark Brewer, a former state Democratic chairman who said he was observing the Detroit vote counting as a volunteer lawyer, said he had been at the TCF arena all day and had talked with others who had been there the past couple of days. He said Republicans had not been denied access.

“This is the best absentee ballot counting operation that Detroit has ever had. They are counting ballots very efficiently, despite the obstructing tactics of the Republicans.”

In one appeal to a Pennsylvania appellate court, the Trump campaign complained that one of its representatives was prevented from seeing the writing on mail-in ballots that were being opened and processed in Philadelphia. A judge in Philadelphia dismissed it, saying that poll observers are directed to observe, not audit.

The Georgia lawsuit filed in Chatham County essentially asks a judge to ensure the state laws are being followed on absentee ballots. Campaign officials said they were considering peppering a dozen other counties around the state with similar claims around absentee ballots.

Trump, addressing supporters at the White House early Wednesday, talked about taking the undecided race to the Supreme Court. Though it was unclear what he meant, his comments evoked a reprise of the court’s intervention in the 2000 presidential election that ended with a decision effectively handing the presidency to George W. Bush.

But there are important differences from 2000 and they already were on display. In 2000, Republican-controlled Florida was the critical state and Bush clung to a small lead. Democrat Al Gore asked for a recount and the Supreme Court stopped it.

To some election law experts, calling for the Supreme Court to intervene now seemed premature, if not rash.

A case would have to come to the court from a state in which the outcome would determine the election’s winner, Richard Hasen, a University of California, Irvine, law professor, wrote on the Election Law blog. The difference between the candidates’ vote totals would have to be smaller than the ballots at stake in the lawsuit.

“As of this moment (though things can change) it does not appear that either condition will be met,” Hasen wrote.

Ohio State University election law professor Edward Foley wrote on Twitter Wednesday: “The valid votes will be counted. (The Supreme Court) would be involved only if there were votes of questionable validity that would make a difference, which might not be the case. The rule of law will determine the official winner of the popular vote in each state. Let the rule of law work.”

Biden campaign attorney Bob Bauer said if Trump goes to the high court, “he will be in for one of the most embarrassing defeats a president has ever suffered by the highest court in the land.”

The justices could decide to step into the dispute over the three-day extension for absentee ballots if they prove crucial to the outcome in Pennsylvania.

Even a small number of contested votes could matter if a state determines the winner of the election and the gap between Trump and Biden is small.