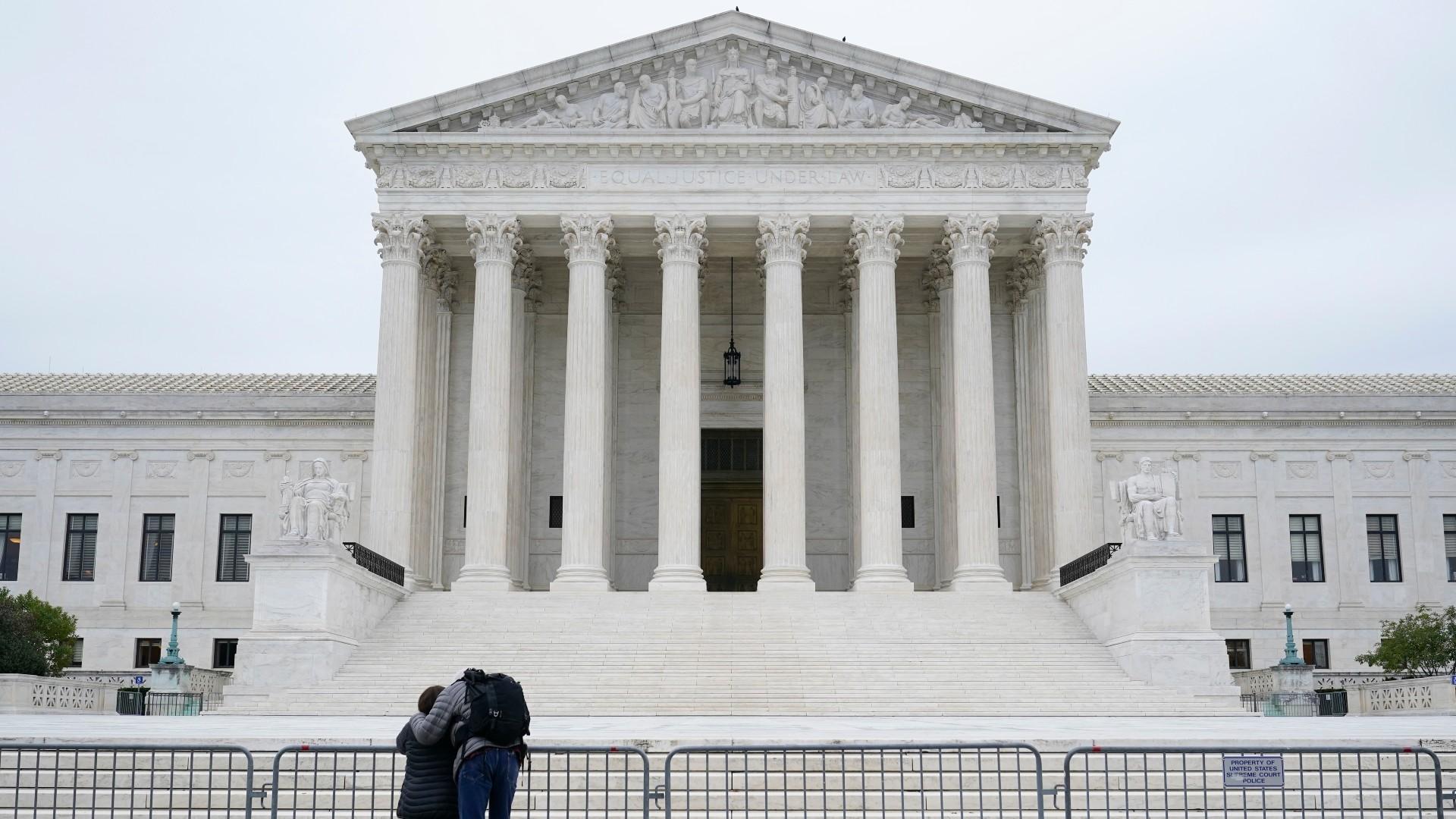 A woman and man pray outside the Supreme Court on Capitol Hill in Washington, Tuesday, Oct. 27, 2020, the day after the Senate confirmed Amy Coney Barrett to become a Supreme Court Justice. (AP Photo / Patrick Semansky)

WASHINGTON (AP) — North Carolina, yes. Pennsylvania, yes. Wisconsin, no. That’s how the Supreme Court has answered questions in recent days about an extended timeline for receiving and counting ballots in those states.

In each case, Democrats backed the extensions and Republicans opposed them. All three states have Democratic governors and legislatures controlled by the GOP.

At first blush, the difference in the outcomes at the Supreme Court seems odd because the high court typically takes up issues to harmonize the rules across the country. But elections are largely governed by states, and the rules differ from one state to the next.

A big asterisk: These cases are being dealt with on an emergency basis in which the court issues orders that either block or keep in place a lower-court ruling. But there is almost never an explanation of the majority’s rationale, though individual justices sometimes write opinions that partially explain the matter.

There also is a difference in how the justices act based on whether they are ruling on a lawsuit that began in state or federal court.

Conservative justices who hold a majority on the Supreme Court object to what they see as intrusions by federal judges who order last-minute changes to state election rules, even in the middle of the coronavirus pandemic. The power to alter absentee ballot deadlines and other voting issues rests with state legislatures, not federal courts, according to the conservative justices.

The court also is divided, but so far has been willing to allow state courts interpreting their own state constitutions to play more of a role than their federal counterparts.

The justices did not finally resolve the legal issues involved, but they could do so after the election. A more thorough examination could come either in a post-election challenge that could determine the presidential winner if, for example, Pennsylvania proves critical to the national outcome, or in a less tense setting that might not affect the 2020 vote, but would apply in the future.

Even a decision that only looked ahead to future elections would be “concerning given that state courts have often been more protective of the right to vote under state constitutions then the federal courts have under the U.S. Constitution,” University of Kentucky law professor Joshua Douglas said.

One more asterisk: new Justice Amy Coney Barrett has not taken part in any of these last-minute orders, but could participate going forward.

Here are some state-specific explanations of what has taken place over the past 10 days:

Last week, before Barrett had been confirmed, the justices divided 4-4, a tie vote that allowed the three-day extension ordered by the Pennsylvania Supreme Court to remain in effect.

On Wednesday, the court said it would not grant a quick, pre-election review to a new Republican appeal to exclude absentee ballots received after Election Day in the battleground state.

But it remained unclear whether those ballots will ultimately be counted.

The court’s order left open the possibility that the justices could take up and decide after the election whether a three-day extension to receive and count absentee ballots ordered by Pennsylvania’s high court was proper.

The issue would take on enormous importance if Pennsylvania turns out to be the crucial state in next week’s election and the votes received between Nov. 3 and Nov. 6 are potentially decisive.

The Supreme Court ruled hours after Pennsylvania’s Department of State agreed to segregate ballots received in the mail after polls close on Tuesday and before 5 p.m. on Nov. 6. Without keeping those ballots separate, Pennsylvania might have risked having the state’s overall vote count called into question.

Three conservative justices signaled their interest in the court’s eventual review of the case.

The court on Wednesday refused to block an extra six days to receive and count absentee ballots in North Carolina.

The State Board of Elections lengthened the period from three to nine days because of the coronavirus pandemic, pushing back the deadline to Nov. 12. The board’s decision was part of a legal settlement with a union-affiliated group. The extension was approved by a state judge.

Lawmakers had previously set Nov. 6 as the deadline for mailed ballots because of the pandemic.

There’s no order or recommendation in North Carolina that ballots received after Nov. 6 be kept apart.

Justice Neil Gorsuch said courts should not be second-guessing the legislature. The election board and the state judge “worked together to override a carefully tailored legislative response to COVID,” Gorsuch wrote.

In Wisconsin, ballots must arrive by Election Day, Nov. 3, to be counted.

The Supreme Court on Monday refused to reinstate a lower-court order that would have added six days to the deadline, identical to the extension granted primary voters in April. A federal appeals court already had blocked the additional days.

This time, it was the court’s liberals who objected. “As the COVID pandemic rages, the Court has failed to adequately protect the Nation’s voters,” Justice Elena Kagan wrote in dissent.

Again, there was nothing from the court explaining its order, but Chief Justice John Roberts, Justice Brett Kavanaugh and Gorsuch all wrote separate opinions.

“Different bodies of law and different precedents govern these two situations and require, in these particular circumstances, that we allow the modification of election rules in Pennsylvania but not Wisconsin,” Roberts wrote, before the court had acted in the North Carolina case.

The Supreme Court has never cited Bush v. Gore in an opinion of the court. In 2000, in its unsigned majority opinion the court wrote, “Our consideration is limited to the present circumstances.”

But three lawyers who worked for Bush’s cause in 2000, Roberts, Kavanaugh and now Barrett, sit on the court.