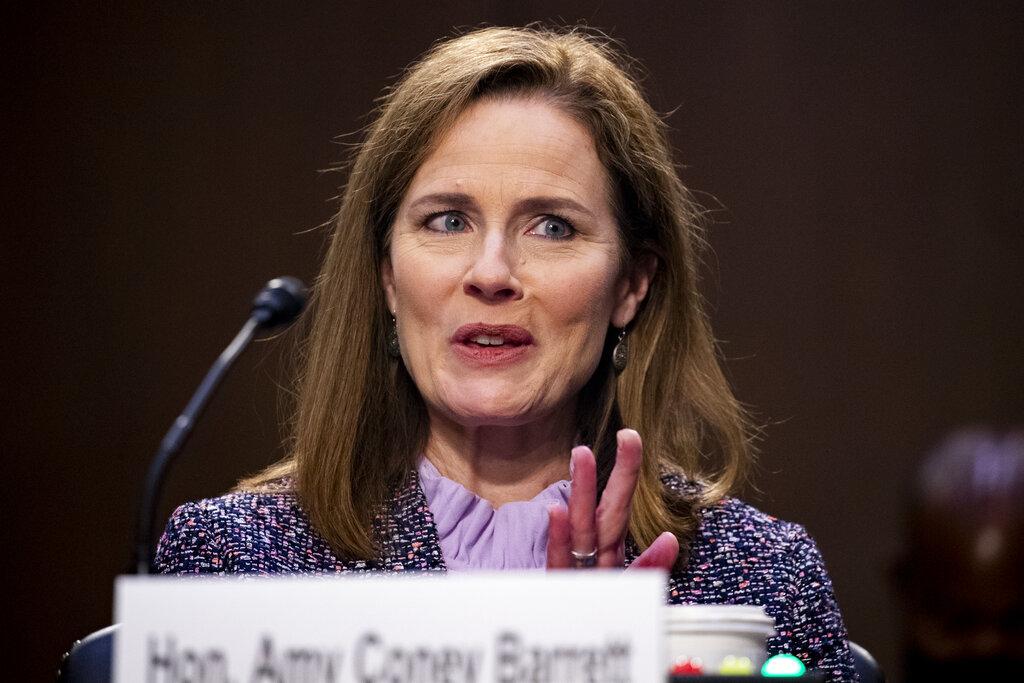 Democratic senators refused to show up in protest of the GOP’s rush to install Trump’s nominee to replace the late Justice Ruth Bader Ginsburg. Never has the Senate confirmed a Supreme Court nominee so close to a presidential election.

All 12 Republicans on the committee voted in favor of Barrett, a conservative judge. No-show Democrats left behind posters at their desks of Americans they say have benefited from the Affordable Care Act, now being challenged at the high court. Senators plan to convene a rare weekend session before a final confirmation vote expected Monday.

“Big day for America,” Trump tweeted after the committee vote.

Barrett, 48, would lock a 6-3 conservative court majority for the foreseeable future. That could open a new era of rulings on abortion access, gay marriage and even the results of this year’s presidential election.

Republicans have bristled at Democrats’ claim that the Obama-era health law, known as “Obamacare,” is in jeopardy if Barrett joins the court. But Trump told CBS’ “60 Minutes” that “it will be so good” if the court puts an end to the law. The court is set to hear a Trump-backed case against the health overhaul on Nov. 10.

“I think it’ll end. I hope that they’ll end it,” Trump said in comments released Thursday by the White House before the interview airs Sunday.

As the Senate committee met, protesters, some shouting “Stop the confirmation!” demonstrated outside the Capitol across the street from the Supreme Court. Some dressed as handmaids, a reference to Barrett’s role in a conservative religious group that once called high-ranking women members “handmaids.” Other demonstrators had “#SupportAmy” signs.

The protesters drowned out Democratic senators who had called a news conference to decry what they called a “sham” confirmation process.

Senate Democratic leader Chuck Schumer of New York said the Senate’s Republican majority “is conducting the most rushed, most partisan and the least legitimate nomination to the Supreme Court in our nation’s history.”

“Democrats will not lend a single ounce of legitimacy to this sham vote,” he said. Unable to stop the confirmation, Democrats have been trying unsuccessfully to stall the process so the winner of the White House race could name the new nominee.

With Republicans holding a 53-47 majority in the Senate, Trump’s pick for the court is almost certain to be confirmed. All Democrats are expected to oppose Barrett’s confirmation.

“This is a groundbreaking, historic moment,” said Sen. Lindsey Graham, R-S.C., the committee chairman. “We did it.”

Barrett, an appellate court judge from Indiana, appeared for three days before the committee last week, batting back Democrats’ questions. She was asked about her approach to legal questions surrounding abortion access, gay marriage and the nation’s tradition of a peaceful transfer of presidential power.

Trump has said he wants a judge seated in time to hear any potential disputes arising from the upcoming election. Barrett declined to say whether she would withdraw from participating in such cases.

Sen. Ted Cruz, R-Texas, said the court fight will be perhaps the “single most important accomplishment” of Trump’s presidency.

“Rather than show up and do their job, they continue the theater,” said Sen. John Cornyn, R-Texas, pointing out the posters at the Democrats’ desks. Sen. Mike Lee, R-Utah, called the boycott “a walkout on the American people.”

But Democrats on the committee insisted the Republicans were rushing the nomination to tip the court even further to the right.

Sen. Mazie Hirono, D-Hawaii, called Barrett a “clear and present danger” to the values Ginsburg fought for on the court.

Many judicial nominees decline to discuss their views on various issues, saying they will consider the cases as they come. Barrett took a similar approach, drawing deep skepticism from Democrats because she had previously spoken out against abortion and past rulings on the health law.

Barrett released dozens of answers this week to additional questions senators had posed, but her responses were similar as she declined to weigh in on whether the landmark Roe v. Wade abortion ruling is a “super precedent” of the court or whether the president could unilaterally change the date set in law for the election.

Senate Majority Leader McConnell, R-Ky., has defended Barrett as “exceptionally qualified” as well as his own decision to push her nomination forward. He had refused to consider President Barack Obama’s nominee in February 2016, saying it was too close to a presidential election that year; Obama was in his second and final term.

Republicans have focused on Barrett’s Catholic faith, calling her a role model for conservative and religious women.

Republicans also warn that Democrats will “pack the court” by adding more justices if they win the White House and the Senate, although key Democrats have not said that would be a priority.

Biden said last week he’s “not a fan” of adding justices to balance the court ideologically. But during his own interview with “60 Minutes,” an excerpt of which CBS released Friday, Biden said he won’t rule out studying the addition of members as part of a commission he plans to name to look at court changes if he’s elected.