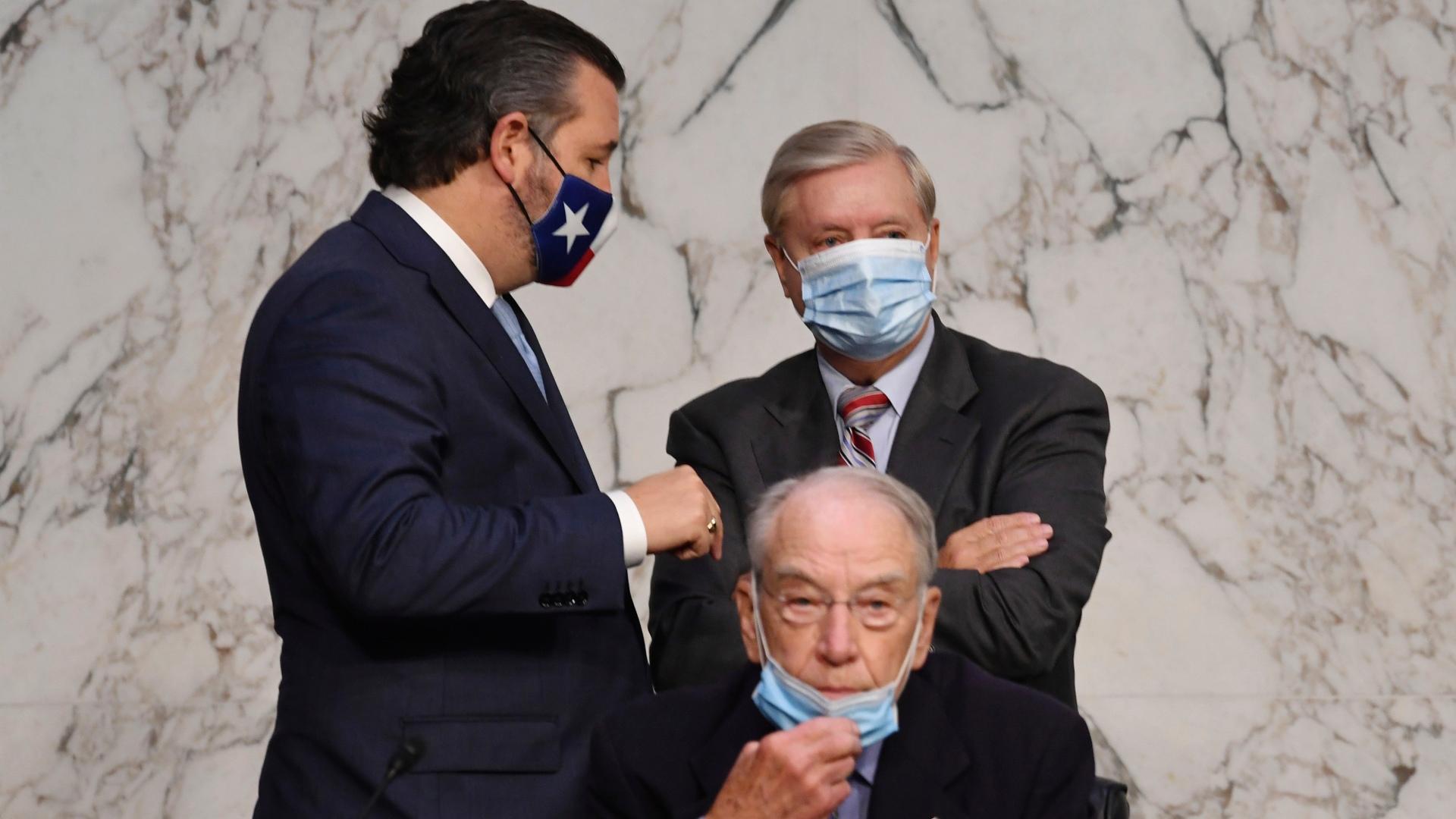 The Senate Judiciary Committee set Oct. 22 for its vote to recommend Barrett’s nomination to the full Senate, with a final confirmation vote expected by month’s end.

“You don’t convene a Supreme Court confirmation hearing, in the middle of a pandemic, when the Senate’s on recess, when voting has already started in the presidential election in a majority of states,” declared Sen. Chris Coons, D-Del.

Republicans eager to fill the seat of the late Justice Ruth Bader Ginsburg countered that Trump is well within bounds to fill the vacancy, and they have the votes to do it. Relying on a slim Senate majority, Trump’s Republicans are poised to lock a 6-3 conservative court majority for years to come.

Barrett’s confirmation would bring the most pronounced ideological change on the court in 30 years, from the liberal icon Ginsburg to the conservative appeals court judge from Indiana. The shift is poised to launch a new era of court rulings on abortion, voting rights and other matters that are now open to new uncertainty.

The 48-year-old Barrett was careful during two days of public testimony not to tip her views on many issues, or take on the president who nominated her. Facing almost 20 hours of questions from senators, she declined to offer specifics beyond a vow to keep an open mind and take the cases as they come.

“It’s not the law of Amy,” the mother of seven told the senators at various times.

Barrett wasn’t present for Thursday’s hearing, the last of the week’s sessions as the coronavirus pandemic hangs over the country. Two GOP senators on the committee tested positive for the virus and two campaign staff members for Democratic Sen. Kamala Harris, the vice presidential nominee, also tested positive, grounding her travel Thursday, the campaign announced.

Stakes are high for all sides. Liberals pounced when top Democrat Sen. Dianne Feinstein of California hugged the chairman, Sen. Lindsey Graham, R-S.C., as days of hearings closed, praising his handling of the process. They called for her immediate removal from leadership.

Among those testifying Thursday in support of Barrett’s nomination, retired appellate court Judge Thomas Griffith assured senators that Barrett would be among justices who “can and do put aside party and politics.”

But a coalition of civil rights groups opposed her nomination. Kristen Clarke, the president of the Lawyers Committee on Civil Rights, said the judge’s unwillingness to speak forcefully for the Voting Rights Act and other issues should “sound an alarm” for Americans with a case heading to the high court.

“Our nation deserves a justice who is committed to preserving the hard-earned rights of all Americans, particularly the most vulnerable,” Clarke testified.

Trump’s Republican allies, led by Senate Majority Leader Mitch McConnell, are reshaping the judiciary, having changed Senate rules at the start of the president’s term to allow 51 votes, rather than the traditional 60, to advance Supreme Court nominees. With a slim 53-47 majority, her confirmation is almost assured. Two Republican senators, Alaska’s Lisa Murkowski and Maine’s Susan Collins, are opposed to voting before the election, but no others objected. Sen. Mitt Romney, R-Utah, said Thursday he will vote to confirm Barrett. She would be Trump’s third justice on the high court.

A former Notre Dame Law School professor, Barrett would be the only one of her Supreme Court colleagues not groomed in the Ivy League. She had little courtroom experience when the Senate confirmed her to the federal bench in 2017, but quickly became a rising conservative star.

At the high court, she may be quickly called on, if confirmed, to consider the GOP-backed challenge to the Affordable Care Act in a case coming before the court Nov. 10, as well as any election-related challenges between Trump and Democrat Joe Biden in the heated presidential campaign.

“Amy’s doing a fantastic job,” Trump said at the White House before heading out to a Wednesday night campaign rally.

Trump has publicly stated he wants a justice swiftly seated for both situations. The president has said on Twitter he wants a justice who would rule differently than Chief Justice John Roberts, who helped preserve the law in previous cases. And he said he wants a justice in place for any disputes arising from the election, particularly concerning the surge of mail-in ballots expected during the pandemic.

Barrett frustrated senators during two days of public hearings by declining to disclose views on those matters, and many others, despite a collection of public statements and writings against abortion and the court’s decisions on the health care law.

She brushed past Democrats’ pressing questions about ensuring the date of next month’s election or preventing voter intimidation, both set in federal law, and the peaceful transfer of presidential power. She also refused to express her view on whether the president can pardon himself.

When it came to major issues that are likely to come before the court, including abortion and health care, Barrett repeatedly promised to keep an open mind and said neither Trump nor anyone else in the White House had tried to influence her views.

Nominees typically resist offering any more information than they have to. But Barrett is the most open opponent of abortion nominated to the Supreme Court in decades. She refused to say whether the 1973 landmark Roe v. Wade ruling on abortion rights was correctly decided, though she has signed two ads against it.

“What was the point of the hearing if we don’t know what she thinks about any issues?” Durbin asked at Thursday’s final session.

Durbin said even if Barrett won’t disclose her views, “We get direct answers every day from the president.”

Republicans focused intently on her Catholic faith and what Graham called Barrett’s “unashamedly pro-life” views as a role model for conservative women.

Others testifying Thursday included Laura Wolk, the first blind woman to be a law clerk for the Supreme Court, who told senators that Barrett’s encouragement and support were life-changing.

“Her brilliance is matched only by her compassion,” said Wolk, who also spent a year as a law clerk for Barrett.

But Crystal Good, a writer from West Virginia, shared the very personal story of seeking an abortion as an abused teenager. “Hear us when we ask you not to approve this nomination,” she implored the senators. 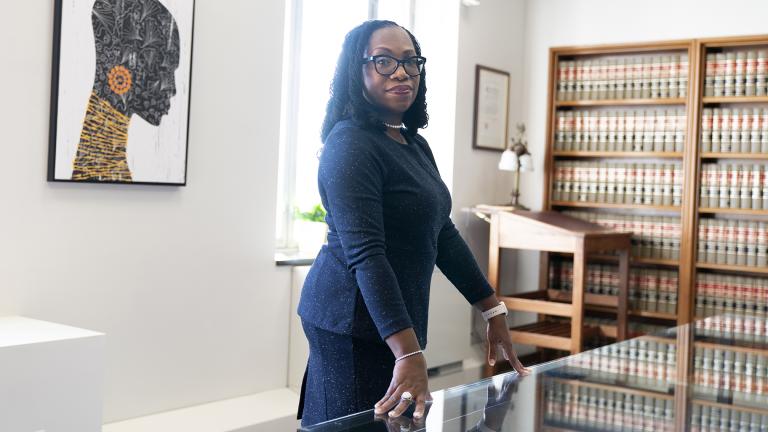