WASHINGTON (AP) — President Donald Trump on Wednesday tried to walk back his refusal to outright condemn a far right fascist group during his debate with Democrat Joe Biden, but the inflammatory moment was far from the first time the president has failed to denounce white supremacists or has advanced racist ideas.

Trump’s initial refusal to criticize the Proud Boys — instead saying the group should “stand back and stand by” — drew fierce blowback before he altered his message in a day-later effort to quell the firestorm.

“I don’t know who Proud Boys are. But whoever they are they have to stand down, let law enforcement do their work,” Trump told reporters as he left the White House for a campaign stop in Minnesota.

The new flareup over Trump’s messaging on race was playing out just weeks before the election, leaving the president to play defense on yet another issue when he’s already facing criticism of his handling of the coronavirus pandemic and under new scrutiny over his taxes.

And even after saying the Proud Boys should “stand down,” Trump went on call out forces on the other end of the political spectrum and tried to attack Biden. It was an echo of the way he had blamed “both sides” for the 2017 violence between white supremacists and anti-racist protesters in Charlottesville, Virginia.

“Now antifa is a real problem,” Trump said. “The problem is on the left. And Biden refuses to talk about it.”

In fact, FBI Director Christopher Wray told a congressional panel last week that it was white supremacists and anti-government extremists who have been responsible for most of the recent deadly attacks by extremist groups in the U.S. 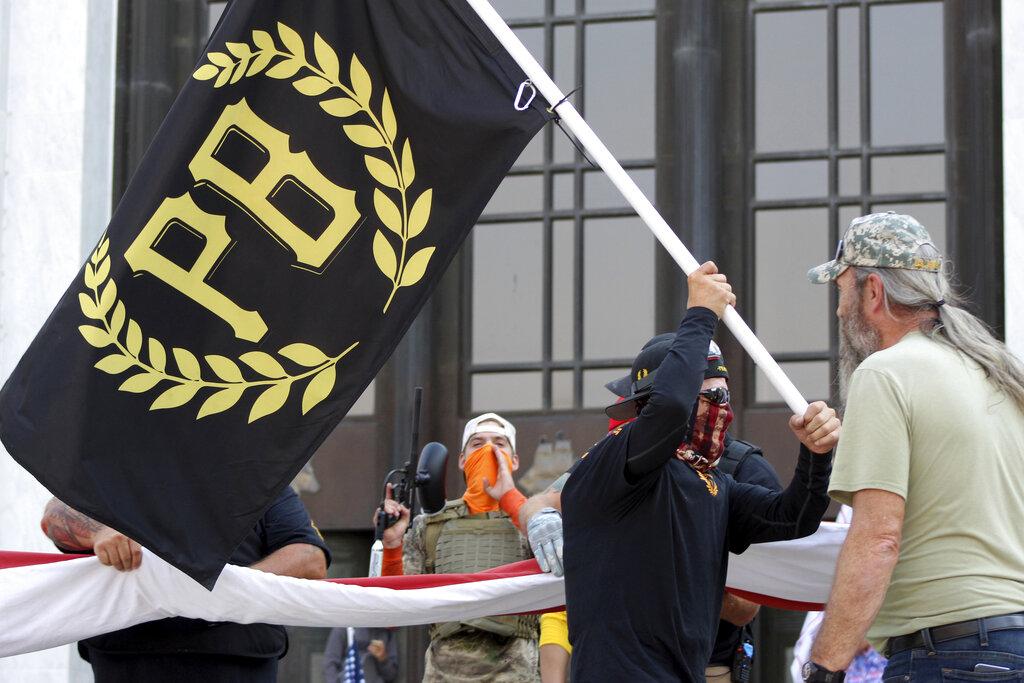 In this Sept. 7, 2020 photo, a protester carries a Proud Boys banner, symbol of a right-wing group, while other members start to unfurl a large U.S. flag in front of the Oregon State Capitol in Salem, Ore. (AP Photo / Andrew Selsky, File)

Proud Boys leaders and supporters took to social media to celebrate the president’s comments at the debate, with more than 5,000 of the group’s members posting “Stand Back” and “Stand By” above and below the group’s logo.

And when Trump was directly asked Wednesday if he “would welcome white supremacist support,” he ignored the question and again stressed the need for “law and order.”

Trump built his political career on the back of the racist lie of birtherism — the false claim that Barack Obama was not born in the United States — and his business and political lives have long featured racial rhetoric and inflammatory actions. The president has rarely condemned white supremacists when not pressed to do so, and his refusal to criticize the fascist group was denounced by Democrats on Wednesday.

Senate Democratic Leader Chuck Schumer pressed his Republican colleagues: “How are you not embarrassed that President Trump represents your party? How can you possibly, possibly, support anyone who behaves this way?”

In an ugly debate marked by angry interruptions and bitter asides, Trump’s remarks about the Proud Boys stood out. He was asked by moderator Chris Wallace of Fox News if he would “be willing tonight to condemn white supremacists and militia groups” and demand that they “stand down” and not add to the violence that has erupted in places like Portland, Oregon, and Kenosha, Wisconsin.

The president said “sure,” but did not offer any actual words of condemnation, instead pivoting to blame the violence on left-wing radicals like antifa supporters. When pushed by Wallace, Trump asked for the name of a group to condemn — and Biden suggested Proud Boys.

“Proud Boys, stand back and stand by,” Trump said.

Few Republicans publicly commented upon the president’s remarks and fewer still criticized them.

GOP House leader Kevin McCarthy insisted Trump did agree when asked if he would condemn the groups, and the California Republican sought to equate the white nationalist groups and the KKK with extremists like antifa.

GOP Sen. Mike Rounds, R-S.D., went only so far as to say, “I was hoping for more clarity.”

Sen. Tim Scott of South Carolina, the only Black Republican in the Senate, said he believed Trump “misspoke.”

“He should correct it,” Scott added. “If he doesn’t correct it I guess he didn’t misspeak.”

Biden called Trump a “racist” during the debate. It’s a charge that has dogged Trump since his early days as a developer, when he called for the death penalty for the Central Park Five — a group of Black men accused of rape but later cleared — and when he fought charges of bias against Blacks seeking to rent at his family-owned apartment complexes.

He became a star in the Republican field after promoting the racist idea that Obama wasn’t born in the U.S. And earlier this year, he briefly wondered if Biden running mate Sen. Kamala Harris, whose mother was Indian and father is Jamaican, was eligible to serve as vice president.

There have been any number of other troublesome moments in recent years:

In his first moments as a presidential candidate, Trump suggested Mexicans were “rapists.” He proposed temporarily banning Muslims from the United States. He retweeted posts from accounts that appeared to have ties to white nationalist groups. He was slow to reject the endorsement of former KKK leader David Duke. And, perhaps most notably, he blamed “both sides” for the violence in Charlottesville that left an anti-racist demonstrator dead.

“I think he has continued to embolden white supremacists,” said Anne Susen, a 60-year-old out-of-work antiques dealer who lives just outside Charlottesville. “He just wants to sow the seeds of division in this country.”

Tori Silver, 22, said there was “no excuse” for Trump not immediately disavowing white supremacist groups.

“It’s kind of like, wow, what is that saying to me as a Black man?” Silver said outside the Albemarle County, Virginia, office where he voted early Wednesday for Biden.

Proud Boys members are ardent Trump supporters known for their violent confrontations with antifascists and other ideological opponents at protests, often drawing the largest crowds in the Pacific Northwest. Members have been spotted at various Trump rallies, including earlier this month in Nevada.

McInnes, who co-founded Vice Media, has described the group as a politically incorrect men’s club for “Western chauvinists” and denies affiliations with far-right extremist groups that overtly espouse racist and anti-Semitic views. McInnes sued the Southern Poverty Law Center last year, claiming it defamed him when it designated the Proud Boys as a “hate group.”

In response to the federal suit, which is still pending in Alabama, the law center said McInnes has acknowledged an “overlap” between the Proud Boys and white nationalist groups. “Indeed, Proud Boys members have posted social media pictures of themselves with prominent Holocaust deniers, white nationalists, and known neo-Nazis,” law center lawyers wrote in a court filing.