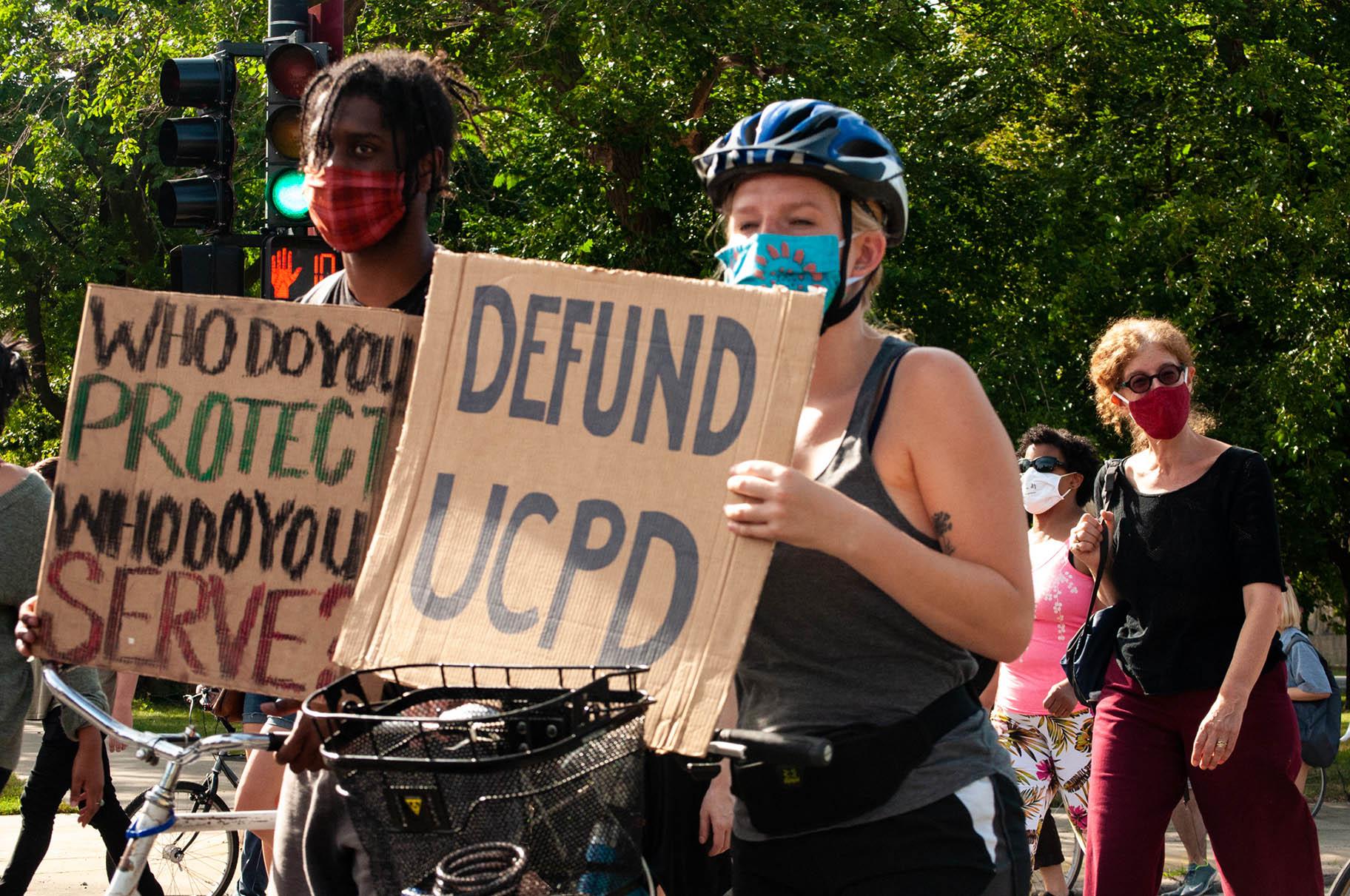 Activists in support of defunding the University of Chicago Police Department participate in a march on Saturday, Aug. 29, 2020. (Grace Del Vecchio / WTTW News)

Student activists from the University of Chicago ended their weeklong occupation of the 4900 block of South Greenwood Avenue in Kenwood on Friday.

The occupation, which began on the evening of Aug. 29, was intended to apply pressure to the university administration to disband the University of Chicago’s Police Department, Chicago’s largest private police force.

The action began last weekend with a march that started at 59th Street and University Avenue on the university’s Hyde Park campus. The march, organized by Care Not Cops and UChicago United, traveled through Hyde Park and Kenwood before culminating outside of Provost Ka Yee Lee’s home on the 4900 block of South Kenwood Avenue. 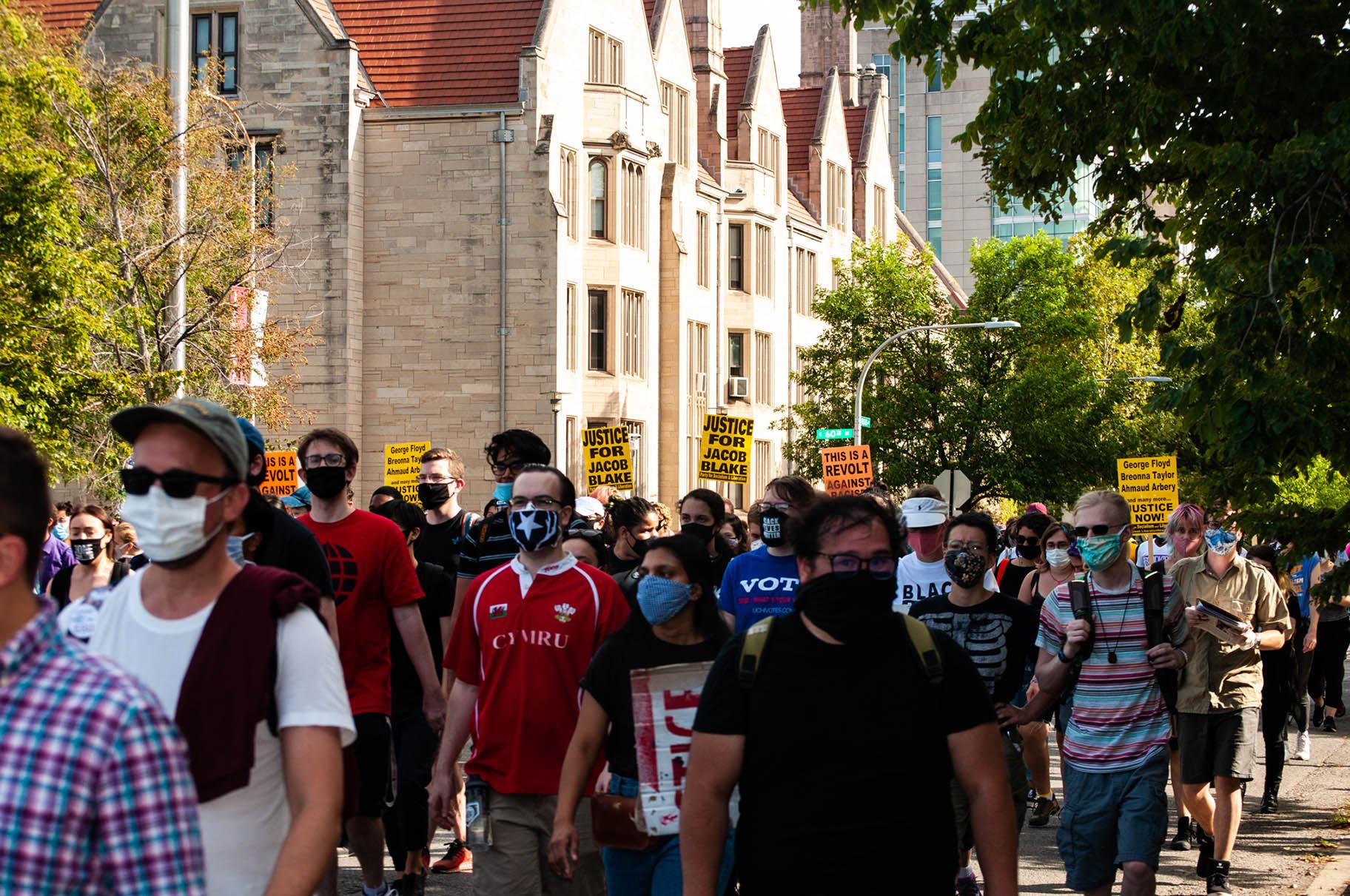 A march against the University of Chicago Police Department was organized by Care Not Cops and UChicago United on Saturday, Aug. 29, 2020. (Grace Del Vecchio / WTTW News)

Activists are demanding that UCPD be disarmed and, by 2022, disbanded. In addition, they want UCPD to disclose its budget for the last 20 years, end all University of Chicago property acquisition, defund half of its budget next year and reinvest in campus resources and grassroots projects in Hyde Park and Woodlawn.

Additionally, protesters have called for funds from UCPD to be reallocated to cultural centers and ethnic studies and for a public meeting to be held between activists and university administration.

Students brought forth those same demands in June when 40 protesters held a 19-hour occupation of the University of Chicago Police Department headquarters.

About 20 to 30 protesters took part in the occupation of Lee’s block each night, some in tents, some on the ground in the open street. Those who stayed would take part in “cop-watching” shifts.

Protesters say they were harassed by police every day during the occupation, but it escalated at 2 a.m. Sept. 3 when police threatened to call sanitation to take their belongings away.

Last night when everyone was asleep and our numbers were low, CPD officers came and raided our camp. They yelled at us to wake up and threatened to call sanitation and throw away all of our belongings. HOWEVER, more people came to support, and we are still here this morning pic.twitter.com/BzaRK96Jyx

Alicia Hurtado, a third-year student at the University of Chicago and an organizer with Care Not Cops, said they worked to create a safe and welcoming space and support each other through the occupation.

“We always want to center the needs and the experiences of those who entered our space,” said Hurtado. “And we wanted to make sure that we were building something that was both sustainable in terms of occupation, but also creating these relationships and building power that extends beyond the space that we were occupying.”

On Friday, after police called for their dispersal three times, police and protesters faced off before protesters left the site, marching through Kenwood, Bronzeville and Hyde Park, ending outside the University of Chicago Police Department headquarters. 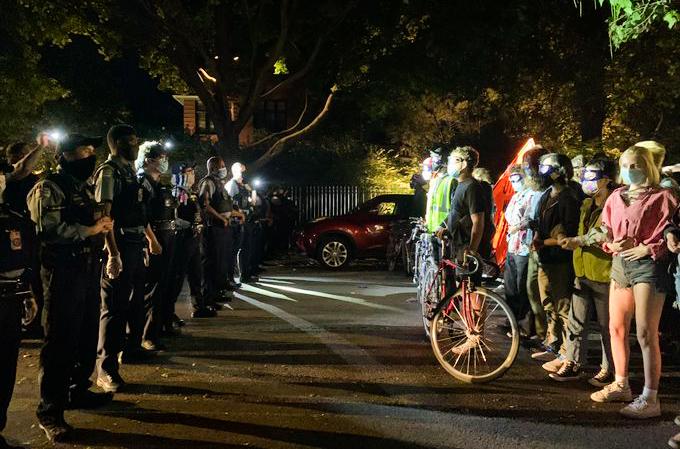 Police and protesters face off on the 4900 block of South Kenwood Avenue on Friday, Sept. 4, 2020. (Grace Del Vecchio / WTTW News)

In a statement provided by university spokesperson Gerald McSwiggan, Lee responded to the students’ demands:

“Provost Lee has repeatedly offered to meet with the group, including in June, on August 31 and again on September 4. In Friday’s offer, which was emailed and hand-delivered to organizers, she noted that she continues to believe it is important to include the group’s perspective as the University conducts a series of listening sessions with a broad range of stakeholders.

“The group placed two demands on a meeting — that it be public, and that the University must agree to disband the UCPD and meet to discuss implementation of that demand. The group represents one perspective and it is important to include their viewpoint. But the university must take into account a range of viewpoints. We will schedule a public forum to discuss issues raised in all of the listening sessions.”

Students say they are not deterred and intend to continue protesting until their demands are met. 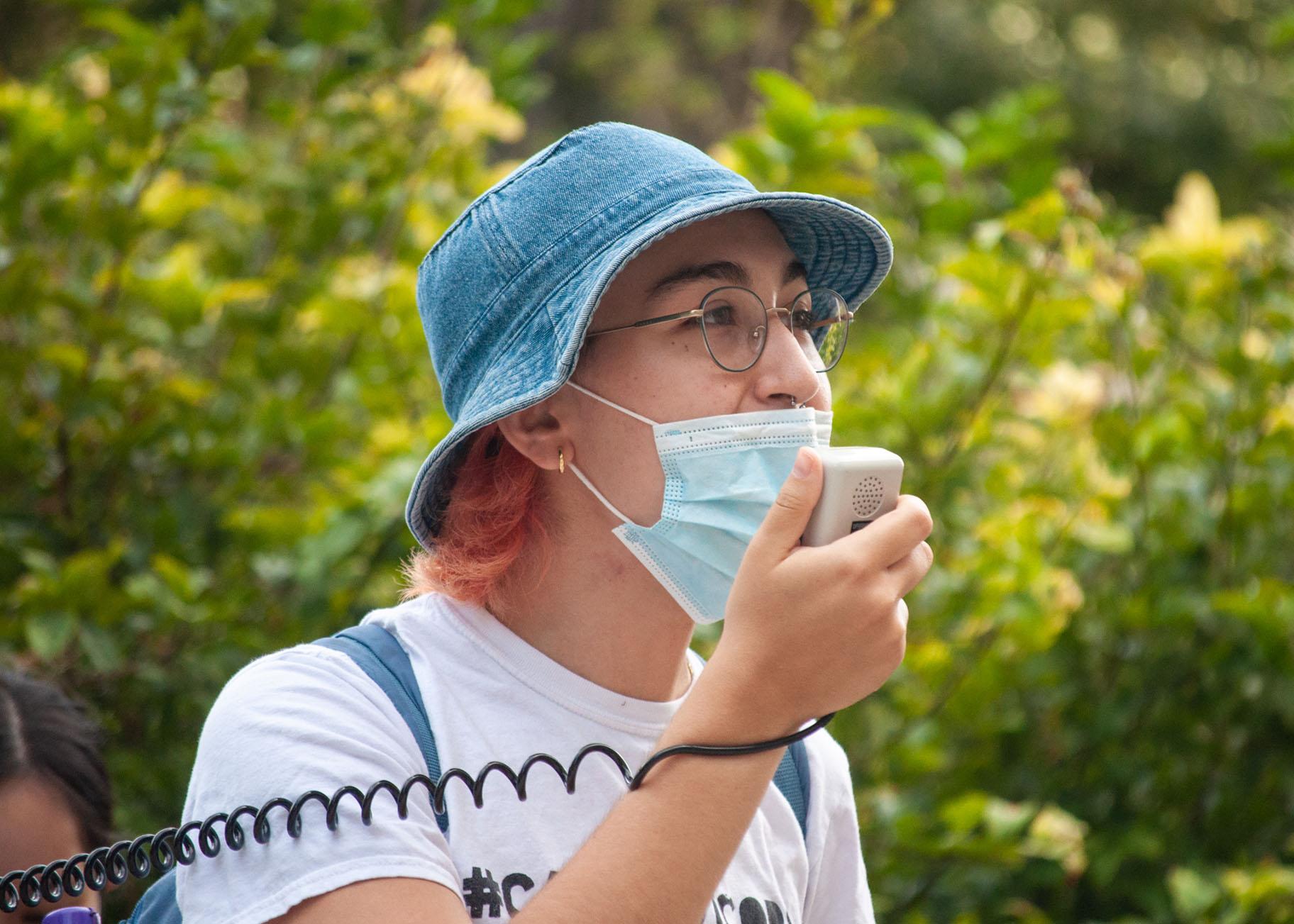 Alicia Hurtado, a third-year student at the University of Chicago and an organizer with Care Not Cops, speaks to student activists during the occupation. (Grace Del Vecchio / WTTW News)

“Care Not Cops and UC United is committed to making sure our administration knows no peace until there is justice,” said Hurtado.