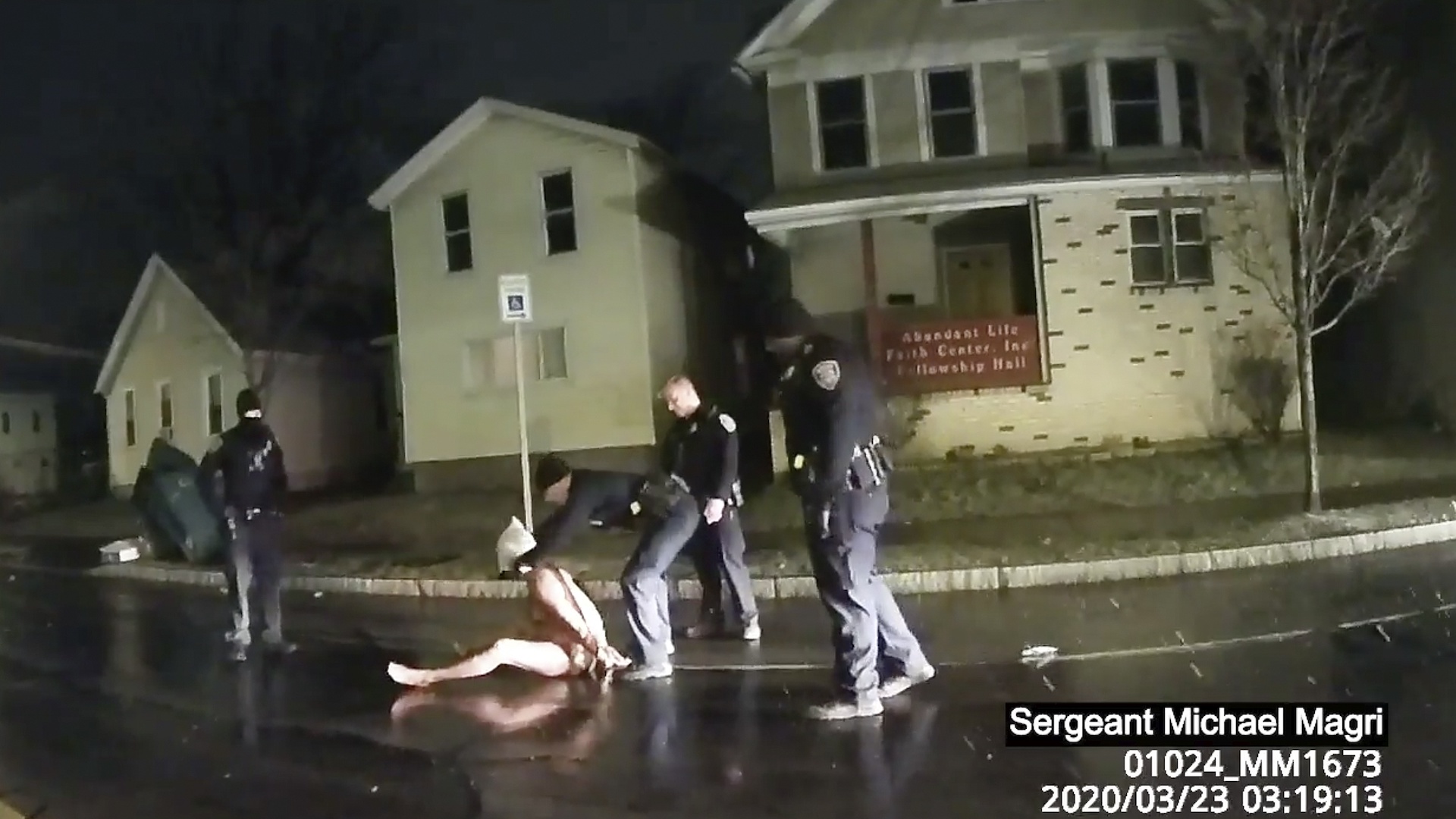 In this image taken from police body camera video provided by Roth and Roth LLP, a Rochester police officer puts a hood over the head of Daniel Prude, on March 23, 2020, in Rochester, N.Y. (Rochester Police via Roth and Roth LLP via AP)

The man who suffocated after police in New York's third-largest city put a “spit hood” over his head was the loving father of five adult children, had some mental health issues but was harmless, and had just arrived in Rochester for a visit with his brother, his aunt said.

Daniel Prude, 41, known to his big Chicago-based family by the nickname “Rell,” died March 30 after he was taken off life support, seven days after the encounter with police in Rochester. Prude, who is Black, was from Chicago.

Prude had been taken into custody for a mental health evaluation about eight hours before the encounter that led to his death. His death received no public attention until Wednesday, when his family held a news conference and released police body camera video and written reports they obtained through a public records request.

Prude had been traumatized by the deaths of his mother and a brother in recent years, having lost another brother before that, his aunt Letoria Moore said in an interview. In his final months, he’d been going back and forth between his Chicago home and his brother’s place in Rochester because he wanted to be close to him, she said.

She knew her nephew had some psychological issues, she said. Still, when he called two days before his death, “he was the normal Rell that I knew,” Moore said.

Prude ran naked through the streets of Rochester and died of asphyxiation after a group of police officers put the hood over his head and pressed his face into the pavement for two minutes, according to video and records.

One officer wrote that they put the white spit hood on Prude because he was spitting continuously in the direction of officers and they were concerned about coronavirus.

The hoods are intended to protect officers from a detainee’s saliva and have been scrutinized as a factor in the deaths of several prisoners in the U.S. and other countries in recent years.

The city halted its investigation into Prude’s death when state Attorney General Letitia James’ office began its own investigation in April. Under New York law, deaths of unarmed people in police custody are often turned over to the attorney general’s office, rather than handled by local officials. The state investigation continues.

“I want everyone to understand that at no point in time did we feel that this was something that we wanted not to disclose,” Rochester Mayor Lovely Warren said at a news briefing. “We are precluded from getting involved in it until that agency has completed their investigation.”

Protesters gathered Wednesday evening outside the police headquarters building in Rochester, a city of 210,000 on Lake Ontario that is best known for being the longtime home of the photography company Kodak. Free the People ROC said several of its organizers were briefly taken into custody after they entered the building while Warren spoke.

They were released on appearance tickets, said Iman Abid, regional director of the NYCLU, who was among those taken into custody.

Demonstrators gathered at the spot where Prude died, chanting, dancing and praying. They stayed late into the night.

Activists are demanding that the officers involved be prosecuted on murder charges and that they be removed from the department while the investigation proceeds.

Calls to the union representing Rochester police officers, and to the organization’s attorney, rang unanswered Wednesday.

The videos show Prude, who had taken off his clothes, complying when police ask him to get on the ground and put his hands behind his back. Prude is agitated and shouting as he sits on the pavement in handcuffs for a few moments as a light snow falls. “Give me your gun, I need it,” he shouts.

Then, they put the hood over his head, and Prude demands they remove it.

Then the officers slam Prude's head into the street. One officer, who is white, holds his head down against the pavement with both hands, saying “calm down” and “stop spitting.” Another officer places a knee on his back.

“Trying to kill me!” Prude says, his voice becoming muffled and anguished under the hood.

“OK, stop. I need it. I need it,” the prone man begs before his shouts turn to whimpers and grunts.

The officers appear to become concerned after he stops moving, falls silent and they notice water coming out of Prude’s mouth.

One officer notes that he’s been out, naked, in the street for some time. Another remarks, “He feels pretty cold.”

His head had been held down by an officer for just over two minutes, the video shows.

The officers then remove the hood and his handcuffs and medics can then be seen performing CPR before he is loaded into an ambulance.

A medical examiner concluded that Prude's death was a homicide caused by “complications of asphyxia in the setting of physical restraint.” The report lists excited delirium and acute intoxication by phencyclidine, or PCP, as contributing factors.

Rochester police officers took Prude into custody for a mental health evaluation around 7 p.m. on March 22 for suicidal thoughts -- about eight hours before the encounter that led to his death. But his brother Joe Prude said he was only at the hospital for a few hours, according to the reports.

Police responded again after Joe Prude called 911 at about 3 a.m. to report that his brother had left his house.

“I placed a phone call for my brother to get help. Not for my brother to get lynched,” Joe Prude said at the news conference. “How did you see him and not directly say, ‘The man is defenseless, buck naked on the ground. He’s cuffed up already. Come on.’ How many more brothers gotta die for society to understand that this needs to stop?”

The fatal encounter happened two months before the death of George Floyd in Minnesota prompted nationwide demonstrations. Floyd died when an officer put his knee on his neck for several minutes during an arrest.