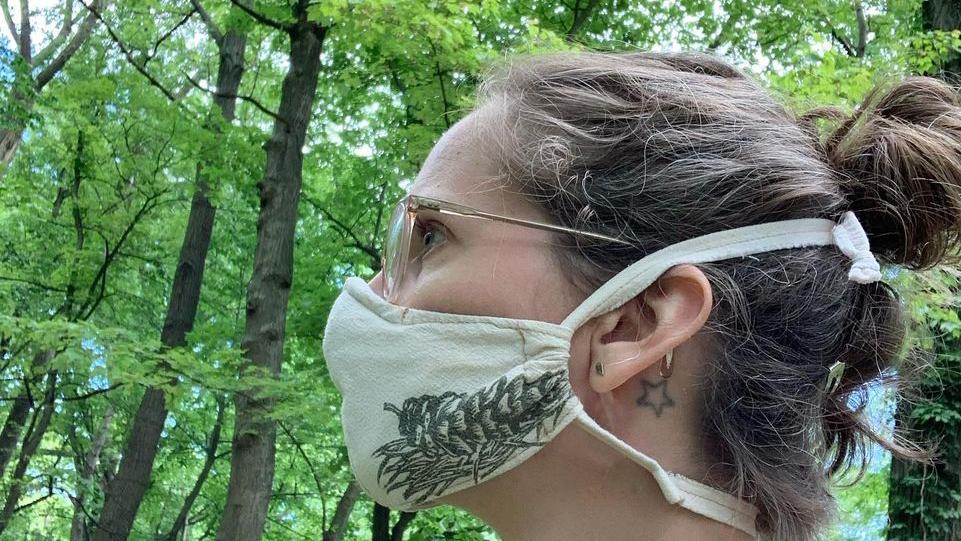 During these times of COVID-19, with travel restrictions keeping folks in state and the great outdoors being relatively safer than the indoor petri dish, a lot of Chicagoans have suddenly discovered Illinois’ natural wonders.

Artist Raychel Steinbach was way ahead of that curve, building a business on the beauty of Illinois’ state parks.

Steinbach runs Current Location Press, one of Chicago’s cluster of letterpress shops owned by women. In recent years, she’s been a regular presence on the city’s art-and-craft-show circuit, where she’s earned a following for her ongoing series of impressionistic prints that celebrate individual Illinois state parks — from the towering sandstone bluffs of Starved Rock to the lily pads of Chain of Lakes — in the same way other artists have turned posters of Chicago’s neighborhoods into a cottage industry.

More recently, Steinbach has repurposed her imagery — the cattails of Moraine Hills, the pinecones of White Pine Forest, the shore of Illinois Beach — to design a line of handmade masks.

So yeah, the natural areas that people have turned to for their mental health and physical fitness during the pandemic are now, in a way, curbing the spread of COVID-19.

It’s a choice of subject matter that, once Steinbach starts talking, makes perfect sense on the one hand and at the same time requires a bit of explaining.

Born in Wisconsin, Steinbach has always been an outdoorsy sort: The kind of kid who liked to climb trees and run around barefoot, and the kind of adult who fell hard for dragonflies during a thru-hike in Minnesota’s Boundary Waters, when she spent an evening listening to them exterminate a plague of mosquitoes by snatching the pests out of the air for dinner.

But she also lived in Hong Kong with her family during her tween and teen years, and later settled in Bangkok after marrying a diplomat (now her ex).

Focusing her art on Midwestern state park scenery might seem provincial compared with the sights she took in during her gadabout days, and that’s precisely the point, Steinbach said.

“Being overseas again as an adult, especially in the international diplomatic community, really opened my eyes to these Americans who have traveled extensively all over the world, who have amazing stories and travels, but they’ve never traveled within their own country, let alone their own state,” she said. “I was like, ‘OK, when I come back to the States, I really want to explore my space.’”

That space turned out to be Chicago. The state parks, Steinbach said, were a way to get to know her new home, and because her art has always been very much informed by the place where she’s living, the Prairie State’s landscapes became her latest source of inspiration. 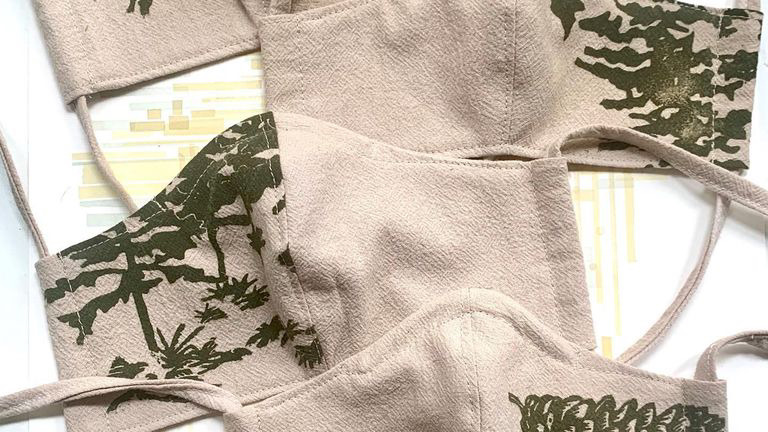 At this point, Steinbach, who lives in Lincoln Square, said she isn’t sure whether to call herself a printmaker or a seamstress.

“I keep teasing a couple friends of mine: ‘If I have been sewing like 98% of my time, am I still a printer?’ I’ve been sewing almost constantly since the shutdown,” Steinbach said.

There’s a certain logic in the shift, she said, given the similarities in the printing process, be it on fabric or paper.

“I always like to say that artists are physical problem-solvers and we use the materials and skills at our disposal in order to solve problems. This is a way I can do my part and use the skills that I have to help a greater thing in my community,” said Steinbach. “As long as the masks are selling, I’ll keep making them.” 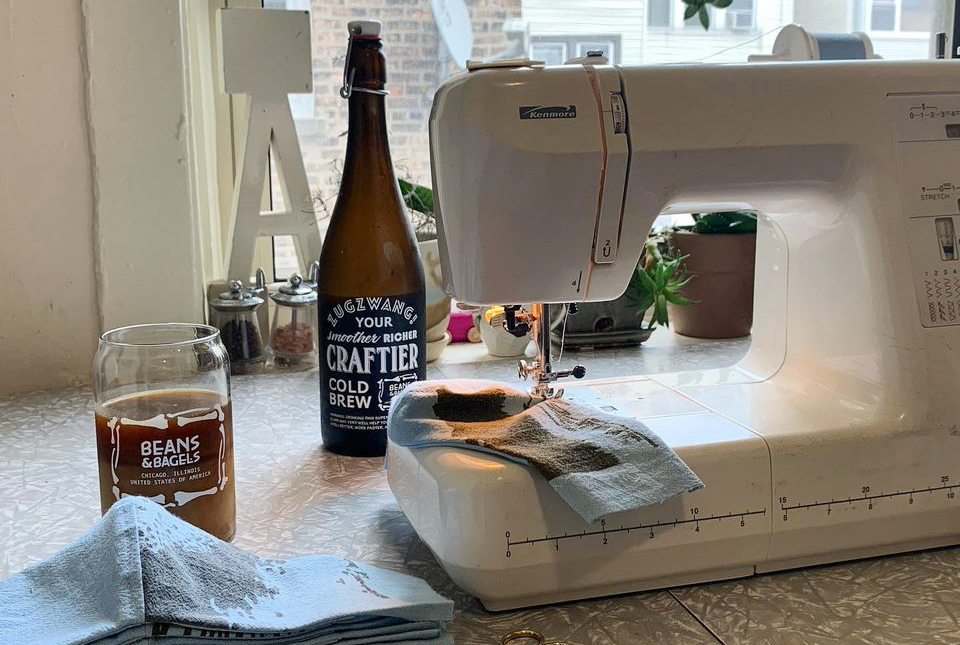 "I learned to sew when i was really young. Making things was always part of my life and that was kind of paired with exploration and movement and travel and especially a lot of walking," Steinbach said. She admitted if she'd known how many masks she'd be making, she might have invested in a new sewing machine. (Current Location Press / Facebook)

“It’s funny, I had just kind of decided that I was going to get a quote-unquote ‘real job,’ right before the pandemic hit,” she said.

Current Location wasn’t bringing in enough money on its own for the divorced Steinbach to support herself and her preschool-aged son, so she’d resigned herself to the fact that she’d have to put printmaking on the back burner, temporarily.

Then the coronavirus pandemic sent Chicago into lockdown. Whatever “real job” she may have thought of applying for no longer existed. Steinbach said her options were either to sit back and feel sorry for herself or to figure out a way to contribute during the stay-at-home order.

Her state park art was the answer.

“Let’s make washable masks,” she decided, “rather than the ones that are littering my alley.”

She started slowly, making just a few at a time while gauging demand. During the summer’s Black Lives Matter protests, Steinbach donated 150 masks to participants to keep them safe.

She continues to tweak her sizing — the shapes of people’s faces has turned out to be as varied as their body types — and to play around with custom natural fabric dyes. Her latest is a soft purplish hue made with extract from the logwood tree.

“At the beginning, when I started making the masks, I felt like, ‘Ooh, I kind of got in on the tail end of this. By the time I’m making them, nobody’s going to want them,’” Steinbach said. “I don’t know, I have a lot of mixed feelings about still needing to be making them, and the amount that I’ve been making.”

Steinbach would rather be on press, setting type and methodically cranking out prints. When the world reboots post-coronavirus, she’ll be ready with new state park designs, one with a prairie theme and another likely to recall a recent camping trip to the Mississippi Palisades.

But for now, the masks are selling more than what she considers her “real” work, and with upcoming holiday craft shows already canceled, the primary sales channel for her art has evaporated.

“The in-person sales are where I sell most of those prints, because people, I think, are more engaged when they know the full story and how I make it and why I choose this fairly labor-intensive way in order to create the prints,” Steinbach said. “When people talk to the artist, I feel like that connection makes the work more important to the person.” 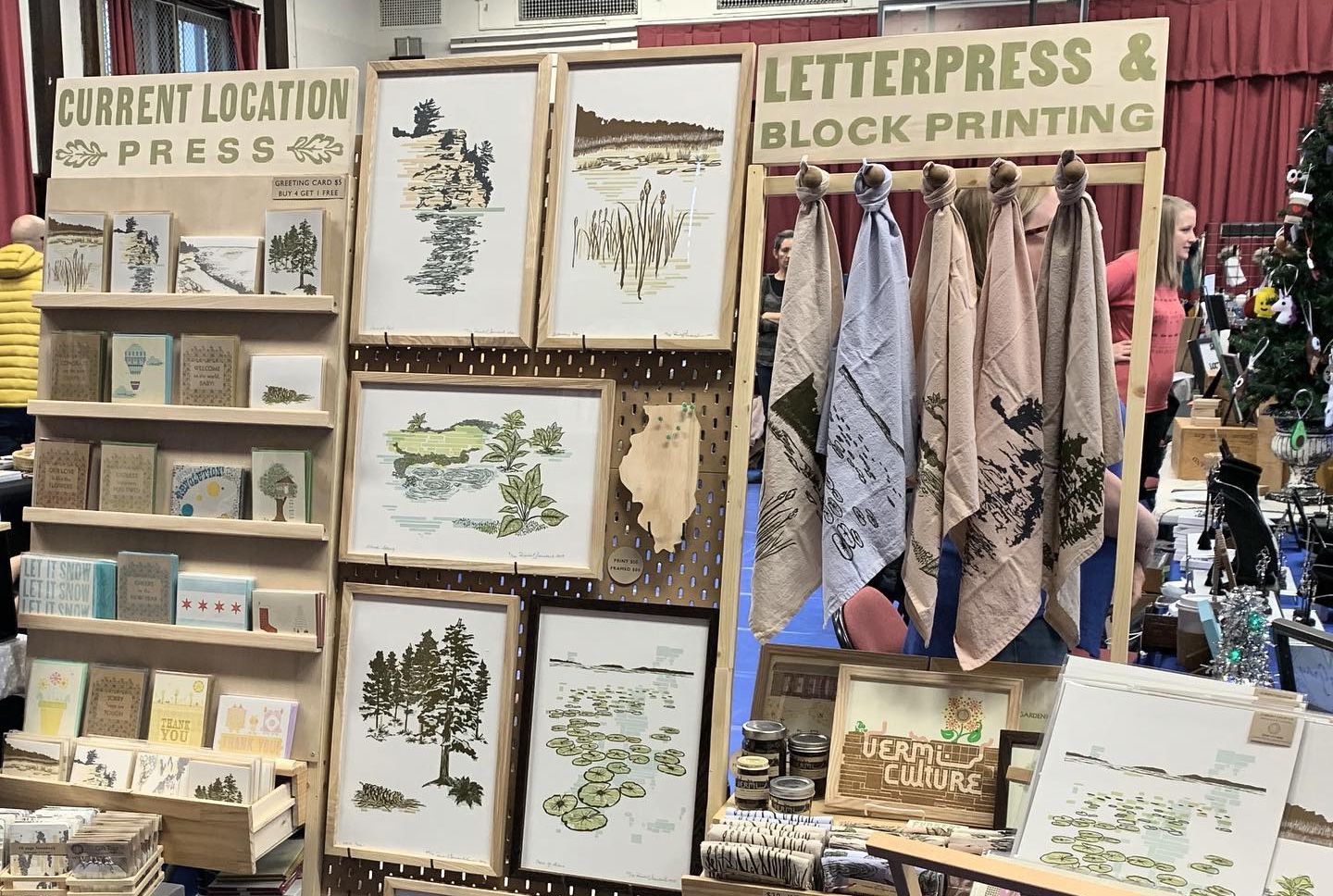 In addition to the state park prints, Raychel Steinbach also creates greeting cards, tea towels and also has a series of urban agriculture-themed artwork. "I'm a city person, but yet my goal is sot often to be outside. It's kind of this one-foot-in-both-worlds idea," she said. (Current Location Press / Facebook)

Like so many other people, Steinbach has found solace in the outdoors during the pandemic. She and her son barely left their apartment the first month of lockdown, she said, but began venturing to parks after health officials said it was OK to spend time outside, especially if wearing masks.

“Once we were able to do that and made it a weekly thing, it totally changed how I felt and how my son felt mentally. We were able to have fun together again, instead of just kind of existing,” said Steinbach. “Going outside gave us a place where we could say ‘yes’ a lot more, rather than constantly, ‘Don’t touch anything’ or ‘Did you wash your hands enough?’”

She recalled a day in early spring when the two wandered around LaBagh Woods, following streams and tramping through the swampy terrain.

“We just walked. Because we were so far away from anyone, we were out there for four hours, had our little lunch sitting on a log, and we didn’t have to have our masks on,” Steinbach said. “I felt like, ‘Oh, I haven’t told him no the whole time.’ It felt normal.”

With all the uncertainty in the world, nature is a constant, she said, and that’s what she’s drawn comfort from during the pandemic and civil unrest.

“Part of what I love about large pieces of undisturbed land is the feeling of permanence. This land has been like this for a very long time,” Steinbach said. “There’s that sense of ‘this space has seen so much change and yet it’s still here, and it’s going to see this change, and we just have to find a way to move through it.’ It puts things back into perspective.” 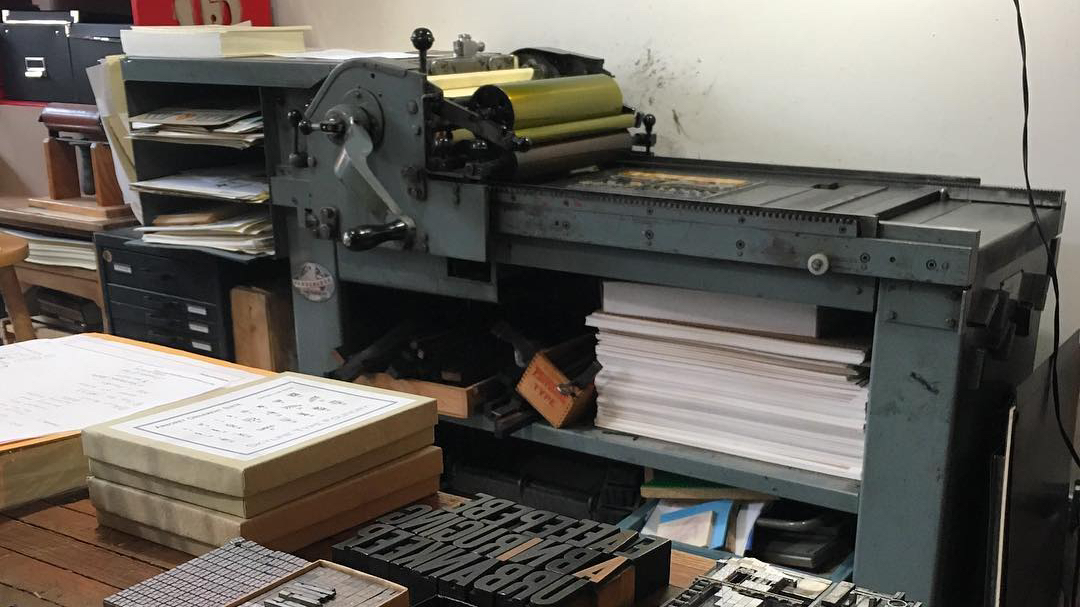 Printing, old-school style. Vandercook presses, like the one in the background, were manufactured in Chicago from the early 1900s through the '60s. Steinbach does her printing out of the Ravenswood studio of Starshaped Press, run by Jennifer Farrell. (Current Location Press / Facebook)

In 2020, the act of printing is as simple as clicking a button on a screen. Anyone can do it.

Raychel Steinbach is among a group of diehard printmakers who prefers to use old-school methods and antique equipment rather than newfangled technology. Think of writing a letter with a feather quill and ink pot instead of sending a text.

Each state park print begins with a visit to the natural area. Steinbach sketches on site and also snaps photos for reference. Because color is a particular obsession of hers, she hikes with a Pantone color matching book in her backpack. Some of the prints, like those at Starved Rock, are of a very specific scenic view, while others are more representative of the park’s general features. 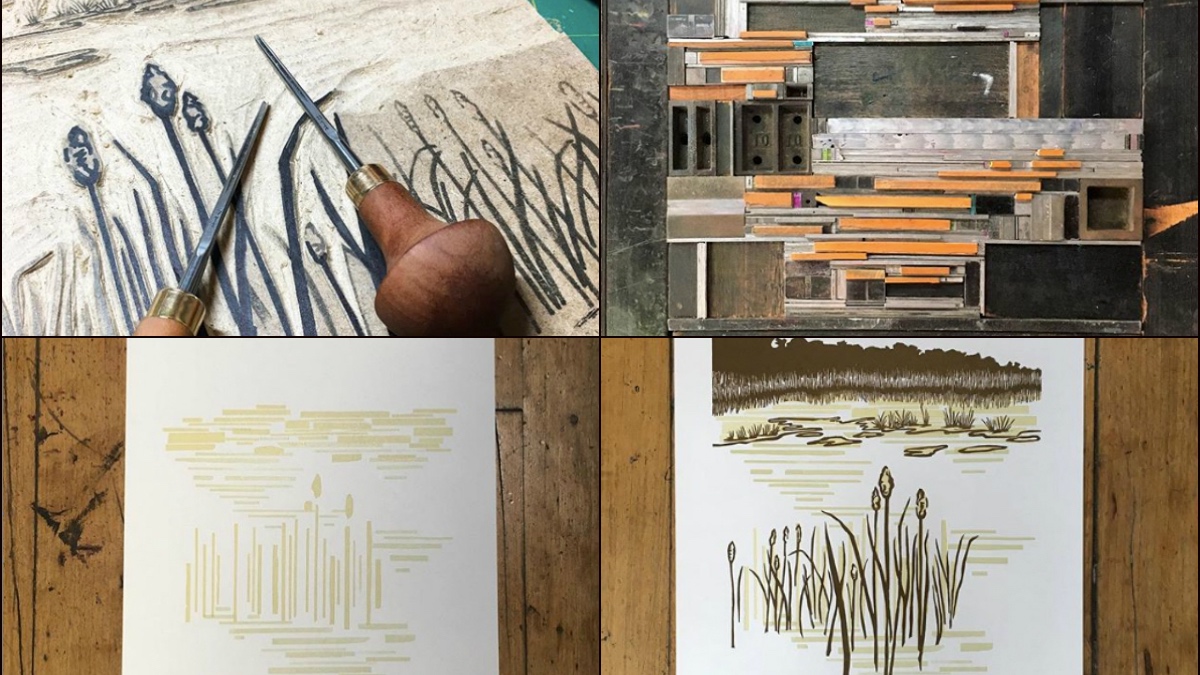 Once a design is finalized, she carves the main image into wood or linoleum — lately almost exclusively using linoleum because it’s easier on her carving tools and she got a great deal on a massive roll of the stuff at The WasteShed. Steinbach prints her masks straight from these original wood and linoleum blocks, using a soy-based ink.

The prints, unlike the masks, have additional background layers, which Steinbach creates by arranging bits of wood into a pattern. Each layer requires its own separate run on the printing press, with Steinbach hand cranking every piece of paper across the inked blocks.

It’s a complex process that’s a testament to Steinbach’s precise technical skill and patience. “Fast isn’t the goal,” she said. 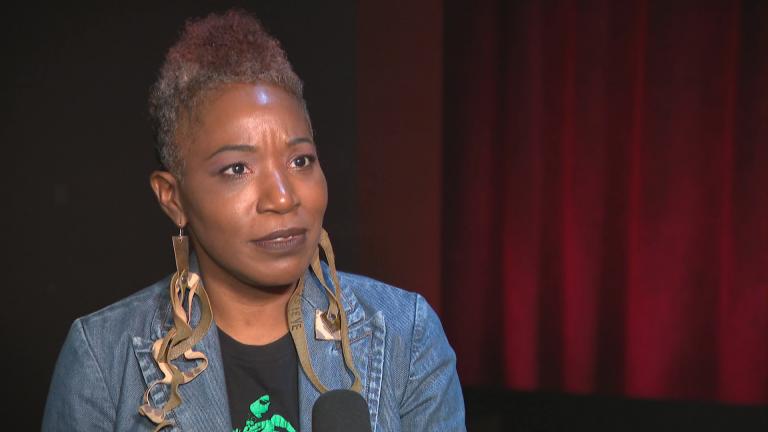 A Classic Soul Song Gets An Update 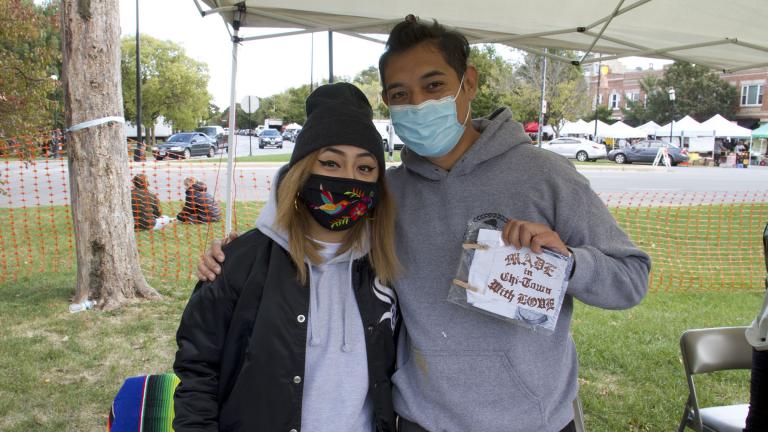