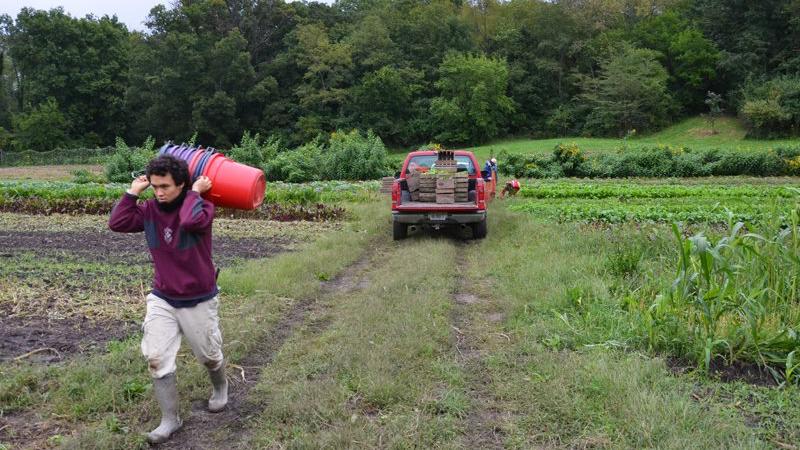 Six years ago, Chicago-based filmmaker Ines Sommer lugged her camera to Congerville, Illinois, to shoot footage for what, at the time, she thought would be a five- to 10-minute rhapsodic video extolling the virtues of the small-scale style of organic farming practiced by Henry Brockman and his family.

She wound up, instead, with a feature-length documentary about the encroachment of climate change on a seemingly idyllic Eden.

Sommer’s “Seasons of Change on Henry’s Farm” will begin streaming Friday via the Gene Siskel Film Center (click here for ticketing information). A free Facebook Live conversation will take place 5 p.m. Sunday with Sommer, Henry Brockman and his sister Terra Brockman, a producer on the film and author of the 2010 James Beard Award-finalist “The Seasons on Henry’s Farm,” the book that sparked Sommer’s initial interest in the subject.

The documentary follows the Brockmans on a journey no one, least of all Sommer, could have anticipated at the outset of filming, including major shifts location-wise and thematically.

Her original concept had been to immerse herself in the sights and sounds of the central Illinois landscape, on the 25 acres where, using methods long abandoned by Big Agriculture, the Brockmans grow 650 varieties of vegetables, sold through Community Supported Agriculture subscriptions and at the Downtown Evanston Farmers’ Market.

“Then when I got to know Henry and his family a little bit better, I just thought, ‘Oh, there is more here,’” said Sommer, whose past projects include 2016’s “Count Me In” (which aired on PBS stations). “And you know, one of the benefits of doing very low budget documentaries is that you’re your own boss and you can decide, ‘OK, I’ll invest my own labor and time to kind of see where this leads.’”

The last place she expected it to lead was Japan.

“I did not see that coming. No idea,” Sommer said of Brockman’s surprise announcement of plans to take a year’s sabbatical in Japan — homeland of Brockman’s wife Hiroko, and the place where the couple met. In his absence, Brockman arranged to leave the farm in the hands of a team of interns, former apprentices and daughter Aozora, giving Sommer another spinoff storyline to track.

“Two months into filming, he is completely changing what the film could be,” she said. “I was like, ‘OK, I’ll film a little bit more and let’s see where that gets us.’”

Another curveball came in the form of floods that swamped Brockman’s fields not only during the 2014-15 growing season, when much of the film was shot, but in successive years as well. Sommer, who lives in Rogers Park, would swing down to Congerville to collect additional footage of the swamped fields.

The regularity of once rare floods provided a clear manifestation of the climate change that Brockman is shown becoming increasingly worried about over the course of the documentary — in the abstract at first and then the concrete. At one point, Brockman notes that he’s been able to plant earlier and earlier in the spring due to warmer temperatures, which would seem like a good thing except for that it means his farm has, in effect, “slid” 200 miles south climate-wise in the past 25 years.

Here you have a farmer, doing everything to minimize his environmental impact — not using chemicals or pesticides, steering clear of genetically modified seeds, and treating the earth with reverence — “and even this kind of paradise cannot be independent from the world around it,” Sommer said. “We can put a valiant effort forth, and we can do everything that’s right, but we’re still part of the web of life, and can only mitigate so much alone.”

Though more subtle than images of polar bears dying or glaciers melting, Sommer’s scenes of Brockman’s acreage under water are an equally ominous illustration of climate change, she said.

“It’s not just the huge catastrophic events,” she said. “It’s the food that we eat. Anybody who cares about food has to think about what are the conditions that this food can be grown in. This is already impacting us.”

The topic of climate change bubbled up later in the filming process, which might have thrown a different type of documentarian. But choosing which threads to follow and which to drop, which themes to magnify and which to pull back on, made for the kind of organic filmmaking experience that Sommer prefers, she said.

That nimbleness extended to the myriad ways Sommer needed to scramble to make her scrappy indie doc look like it wasn’t filmed on a shoestring.

Audiences will travel to Japan with the Brockmans, for example, even though Sommer didn’t make the trip.

“I actually was able to connect with a documentary cameraman there and I had exactly the amount of money to pay him for one day of filming,” she said.

Nor can Sommer take credit for the gorgeous aerial shots of the farm.

“Just to show you how low budget this film is and can still achieve something, Mike Mustard, who was a farmhand working with Henry, he took up this hobby of drone flying and did his own vlog. So we did a barter. I gave him a hard drive and he gave me footage,” she said. “I think one of the ways to still be able to produce something is to work on things in a more collaborative manner or figure out ways you can involve others.”

Finally, after years of cobbling together funds to work on the film in fits and starts, Sommer, who has a day job as a lecturer and associate director of Northwestern University’s grad program for documentary film, was ready to share “Seasons of Change” with audiences in late 2019.

She managed to arrange a handful of screenings in the fall and was prepping for the 2020 festival circuit when the coronavirus pandemic hit and everything was canceled. The Siskel Center streaming opportunity is in lieu of a theatrical run that had been set for April.

“All filmmakers are grieving right now. We want to connect with our audiences and how can we?” Sommer asked. “It’s great that we have a chance to at least connect with people online, but it is not the same thing. I try not to dwell too much on it because I’ll just be depressed for the next year. We’ll just have to pick up our spirits and hopefully in a year or two from now we can have gatherings again.”

Ironically, one of the few screenings she did pull off seems in retrospect tailor-made for these times of COVID.

Sommer showed the film outdoors at Henry’s Farm in October 2019. About 100 people turned up to watch, sitting on bales of straw and in folding chairs, with the movie projected onto the door of the farm’s shed.

“You see that big shed (in) the beginning of the film,” Sommer said. “Almost like the first shots of the film, that’s where I bring the film back to for the screening. So that felt really eerie.”