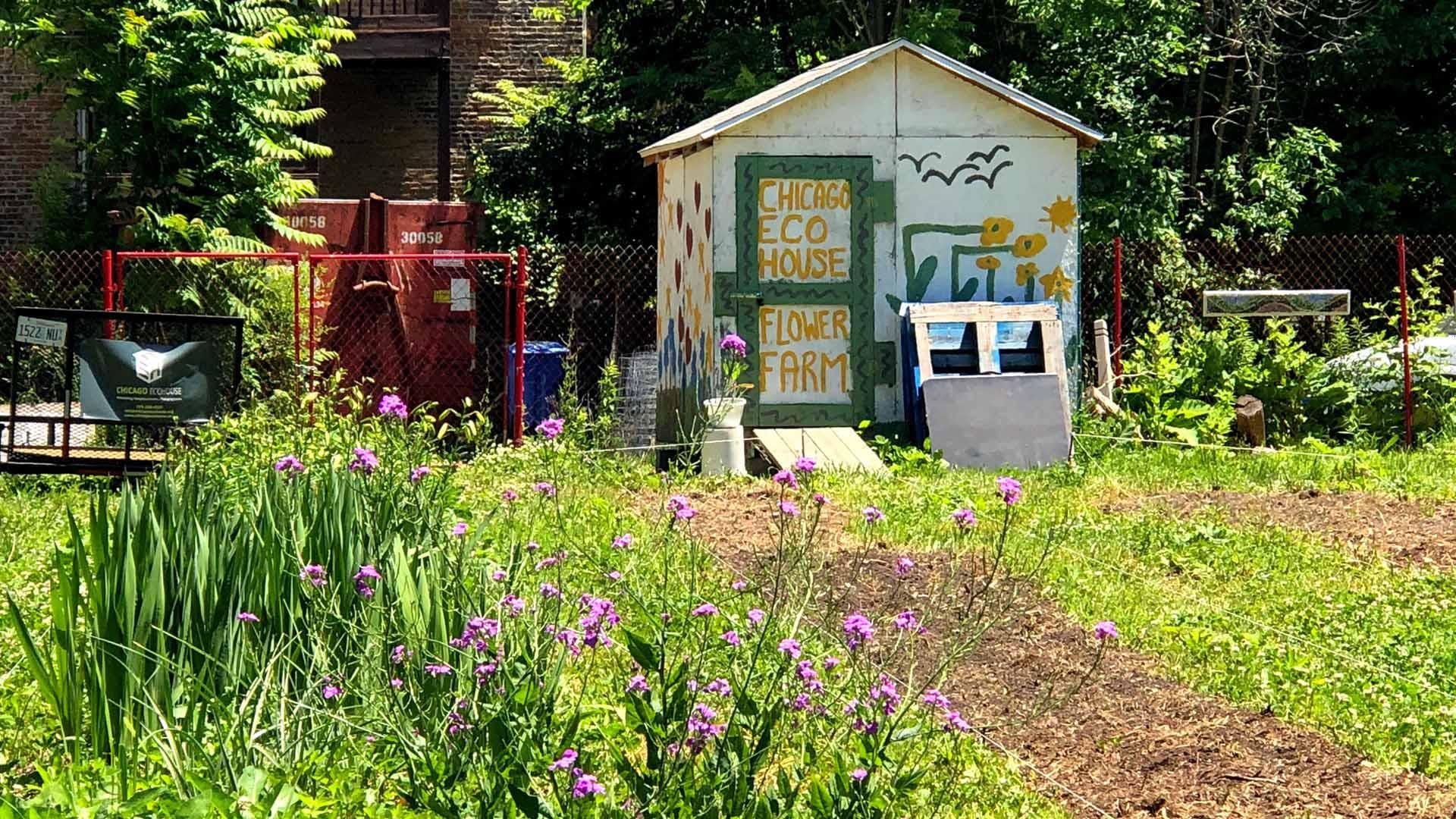 Have you ever given much thought to where flowers come from?

We don’t mean “come from” in the biological sense — that’s a birds-and-bees discussion for another day. We’re talking geographically, as in: “Where in the world?”

The answer, in terms of cut flowers sold in the U.S., is more often than not Colombia or possibly Ecuador. The small slice of the market not dominated by imports is, in turn, almost entirely monopolized by California growers.

Before they reach Chicago, the blooms, most of which are cultivated in greenhouses, will have traveled thousands of miles via energy-guzzling refrigerated planes, cargo ships and trucks, passing from farmer to exporter to wholesaler to retailer. Plenty won’t survive. What you wind up holding in your hand is less a natural wonder than a marvel of logistics and the modern global supply chain.

All of which serves as a prologue to the story of Eco House.

Eco House upends pretty much everything we just told you about the flower industry. Here’s a farm with land located not in South America but the South and West sides of Chicago. Flowers are grown outdoors in the dirt on formerly vacant lots in Englewood, Woodlawn and West Garfield Park, and then sold directly to consumers.

That’s not just one but a series of seemingly quixotic choices.

Yet Eco House founder Quilen Blackwell looks at his fraction of acreage and sees not a fool’s errand but the seeds of what could be Chicago’s own Napa Valley, a thriving homegrown industry built from the ground up, one stem at a time.

“We hope we can scale this up, that one day the ghetto as we know it is gone and it becomes a place of abundance and prosperity and peace,” Blackwell said.

Here’s why the idea could actually succeed.

Eco House is part of the blossoming slow flowers movement, which sprung up in the last decade as the farm-to-vase equivalent of the farm-to-table concept. Across the country, intrepid farmers are reviving the long dormant traditions of growing flowers locally and seasonally, bringing back practices abandoned decades (and in some cases centuries) ago.

Visit one of the Eco House farms in early spring, and daffodils, hyacinths and tulips will be flowering, just as in residential gardens across Chicago, because that’s what grows well here, not hothouse exotics. Zinnias, sunflowers, lilies, dahlias and gladiolas will come later, tied to the natural rhythms of the sun and earth, not forced.

The plots are planted successively to stagger the harvest and minimize the amount of time when nothing’s in bloom — a very real downside to slow flowers in the Midwest.

Blackwell calls this physical separation of farm sites “geo-diversity,” and views it as an advantage. An example is the freeze that occurred this past May. The late frost killed off all the peonies at Eco House’s Englewood lot, but Woodlawn’s survived, thanks to an ever so slightly different microclimate.

“The more diverse we can make it,” Blackwell said of his business model, “the more resilient we are.”

In the spirit of resiliency, Eco House is designed to be as self-sufficient and sustainable as possible.

On a tour of the Englewood site, Blackwell showed off the farm’s irrigation system, which draws water from a cluster of 275-gallon rain barrels — no tapping into the city’s pipes — and is powered by solar panels.

“Everything’s off the grid here,” Blackwell said, ergo, no water or electric bills.

Waste is kept to a minimum, and a use is even found for what other people would call weeds.

“We don’t believe in weeds,” said Blackwell. “What seems like a problem could be a product.”

Pointing to a purple-budded “volunteer” that popped up amidst cultivated plantings, he said: “That ‘weed,’ put it in an arrangement and it’s beautiful. Garbage in one context becomes treasure.”

Blackwell’s wife Hannah, formerly a hair stylist, is chief florist, running Southside Blooms, the flower shop arm of Eco House farms. (The gig is a natural fit, her husband said, because Southside Blooms is really in “the beauty business.”)

She works her magic out of the basement of the couple’s home, not far from the Englewood farm, designing everything from individual bouquets to large-scale arrangements for events. The space is outfitted with a small walk-in cooler, carved out of square footage that other young families — the Blackwells have 2-year-old twins and a 1-year-old — might have devoted to a jerry-rigged half-bath.

There are compost bins in the back yard for floral scraps and bouquets are wrapped in paper recycled from copies of the South Side Weekly.

All of these cost-savings — from not having a water bill to forgoing a traditional storefront to eliminating all of the middlemen in the farmer-to-exporter-to-wholesaler-to-retailer chain — allow Blackwell to undercut giants like Pro Flowers and 1-800-Flowers.

“We’re able to sell at a competitive price, but we make money on that,” he said, with profits plowed back into Eco House. 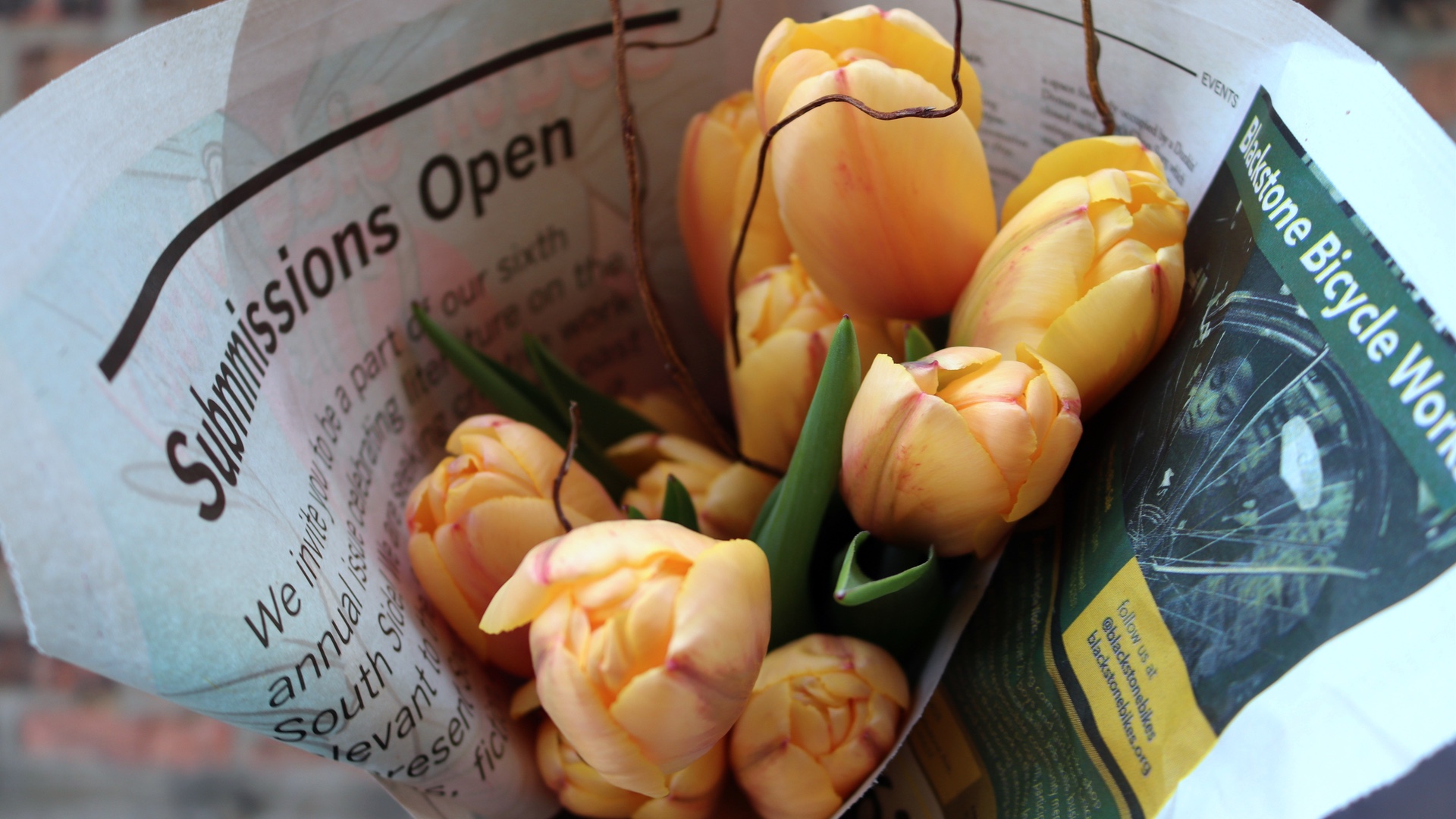 The price may be right but, according to feedback Blackwell has collected, it’s not the primary reason people buy flowers from Southside Blooms.

Most of his customers, he said, fall into the category of “conscientious consumer,” meaning they make an active decision to spend their dollars with Southside Blooms because they want to support the mission of Eco House farm.

That mission, we should interject, encompasses more than the slow flowers movement.

Blackwell, a former Peace Corps volunteer, founded Eco House as a nonprofit to reverse the trends of poverty and unemployment in Chicago neighborhoods suffering from neglect and disinvestment.

What he’s really growing are jobs.

Apart from a farm manager and manager of operations, the farm and flower shop workforce is drawn from Eco House’s job training program, which serves youth and young adults, ages 16-25. Though program participants perform tasks such as planting bulbs, harvesting flowers and packaging bouquets, Blackwell said the goal isn’t necessarily to create the next generation of flower farmers or florists.

“We’re training people how to work,” he said.

A native of Madison, Wisconsin, Blackwell arrived in Chicago to attend seminary school. As part of his studies, he started volunteering with Urban Prep Academies, and as Blackwell became better acquainted with the South and West sides, he began creating a mental inventory of what he considered the areas’ assets. Among them: lots of vacant land and lots of young people in need of jobs.

He had found his church and his flock.

Drawing on his Peace Corps experience, in which Blackwell was posted to rural Thailand, small-scale farming immediately came to mind as a way to harness the potential of unused land and an underemployed labor force, or, as the minister in him says: “Creating opportunity by unleashing the provision of the earth.”

Eco House launched in 2015 and after a few false starts, Blackwell realized flowers were the perfect means to the end of alleviating poverty.

“Why flowers and not fruits and vegetables?” is a question he’s often asked, and the answer has nothing to do with an overriding passion for alliums or amaranth.

Eco Farm was just beginning to hit its stride, having spent its first five years working out operational kinks, when the COVID-19 pandemic hit, cutting off the weddings, corporate shindigs and birthday parties that had been Southside Blooms’ bread-and-butter outlets for flowers grown by Eco House.

“That was our previous business model. We were event-heavy,” Blackwell said.

The Blackwells quickly shifted to promoting individual bouquets (now taking pre-orders for the late summer harvest) and launched a CSA (community supported agriculture) subscription for summer/fall that sold out.

“The CSA is perfect for us,” he said. “It gives us a stable base of income.” 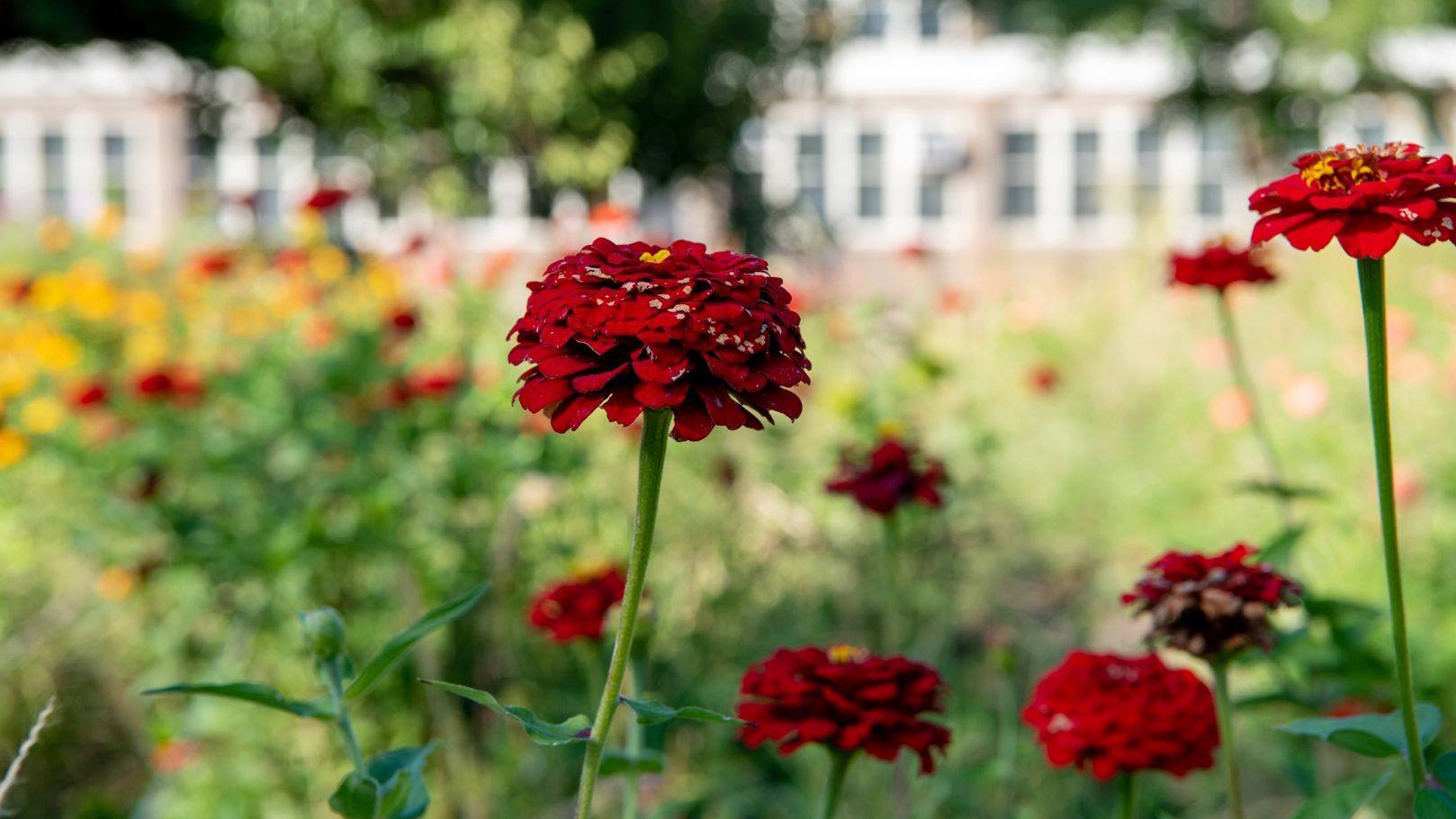 Farming is a risky proposition in the best of circumstances, subject to myriad forces outside a grower’s control. Layer on top of those already daunting odds the fact that Eco House is not just nurturing plants but people, tending to injustice and providing hope, and it’s a wonder the enterprise doesn’t buckle under the weight of its own expectations.

Yet Blackwell is particularly well-suited to leaps of faith. And he’s already witnessed, albeit on a small scale, the transformational power of his idea, of the change that can occur when beauty supplants despair.

Eco House’s Englewood farm is bookended to the south by a once-vacant building and to the north by what Blackwell said used to be a “drug house.”

“They weren’t happy with us building a farm,” Blackwell said of the latter, with one of his quick and hearty laughs. “It kind of discouraged their business.”

Today, the drug dealers are gone and the farm has stabilized the block to the point that the vacant building is being rehabbed.