CHICAGO (AP) — One of Chicago’s bloodiest holiday weekends in memory ended with 17 people fatally shot, including a 7-year-old girl and a 14-year-old boy, and 70 more wounded, despite a concerted effort to quell the violence with an additional 1,200 police officers on the streets.

The violence was far worse than last year, when the long July Fourth weekend ended with six people dead and 66 wounded in gunfire. And the holiday weekend of violence follows Chicago’s deadliest Memorial Day weekend since 2015.

After a relatively peaceful Friday, gunfire erupted around 7 p.m. Saturday. Seven-year-old Natalia Wallace was standing on the sidewalk outside her grandmother’s house in Austin on the city’s West Side during a Fourth of July party when, according to police, suspects climbed from a car and opened fire. The child was shot in the head.

The violence in Chicago and New York caught the attention of President Donald Trump, who tweeted: “The federal government ready, willing and able to help, if asked.” Later, he returned to a familiar theme, suggesting the shootings were related to their status as so-called sanctuary cities for undocumented immigrants.

“Perhaps they will have to start changing their ways (and thinking!)” Trump wrote.

Chicago Police said detectives have arrested a man but he had not been charged in Natalia’s death as of Monday afternoon. The department did not immediately know how many, if any, arrests have been made in the other weekend homicides.

The likelihood that other suspects remain at large points to a longstanding problem in Chicago: Law enforcement’s inability to bring more homicide suspects to justice. For years, the majority of homicides in Chicago have gone unsolved and the department’s homicide case clearance rate is far lower than that of departments in Los Angeles and New York. 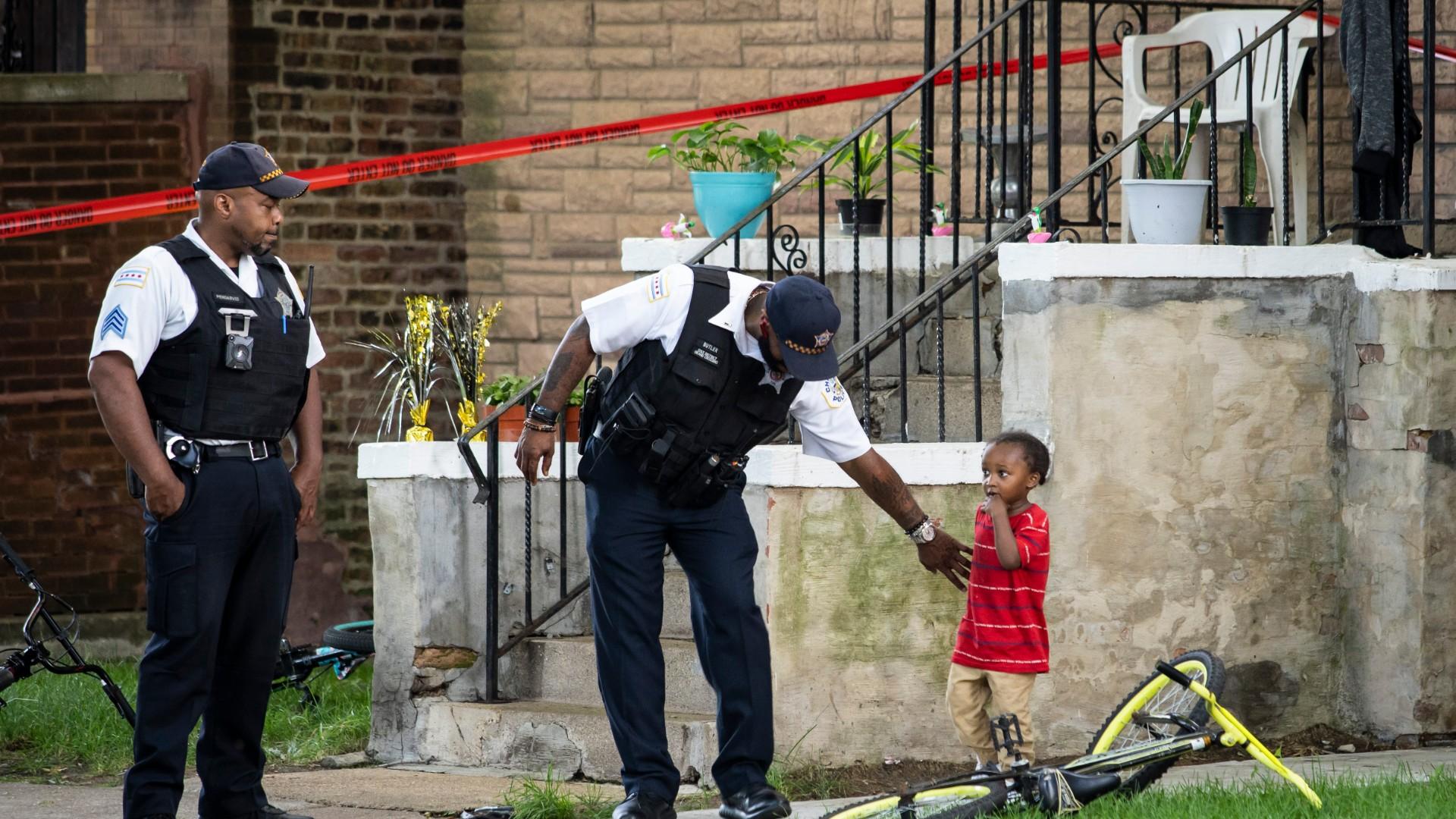 A Chicago police officer helps a child walk through an area being investigated after two men were shot Friday, July 3, 2020, in Chicago. (Ashlee Rezin Garcia / Chicago Sun-Times via AP)

Last year, a police research group recommended significant changes in the way the department investigates homicides. It has implemented a number of the recommendations by hiring 300 detectives, expanding to five the number of centers where homicide detectives are assigned, and setting up a cold case unit in each of them. But after climbing to 49% late last year, the clearance rate has dropped to 39.9% — still higher than the 33% clearance rate of 2016.

While the department expects the rate to recover, Police Superintendent David Brown suggested Monday that a major hurdle is the failure of the county’s criminal justice system to keep violent offenders behind bars.

Brown said the program in which detainees are fitted with electronic bracelets to monitor their whereabouts has been expanded so dramatically that it is now impossible to track them all.

“It’s clearly not working,” he said.

Brown also lamented a drastic reduction in the number of inmates in the county jail, saying it has left Chicago and other communities at greater risk of violent crime. Even before the coronavirus prompted the release of more than 1,600 detainees, an order to judges to set bail amounts that defendants can afford resulted in a reduction of 1,500 detainees in 2017 alone.

“We must keep violent offenders in jail longer,” he said.

Witnesses are reluctant to come forward because of legitimate safety concerns when so many gang members are released shortly after being arrested, Brown said.

“Gangsters threaten not just you if you come forward, they threaten your family,” he said.

About three hours after Natalia was shot, a group of young men police believe are gang members jumped from a vehicle in the Englewood neighborhood on the South Side and opened fire on a rival gang member.

“They shot and killed him and they stand over him and keep shooting” before fleeing in the car, Deputy Chief Brendan Deenihan told reporters Monday morning.

Fourteen-year-old Vernado Jones Jr., who was nearby, was fatally shot in the armpit.

“He had nothing to do with gang-on-gang violence. He was not the intended target,” Deenihan said.

Brown lamented the growing roster of the youngest victims.

“We cannot get used to hearing about children being gunned down in Chicago every weekend,” he said.

This year, the department counted the July Fourth weekend shootings from 6 p.m. Thursday through the end of Sunday. In all, 13 children under the age of 18 were shot, including the two that died.

The weekend violence highlighted what has been a particularly dangerous year for children in Chicago. Police statistics show there have been 32 homicide victims under the age of 18 this year compared to 20 by this point in 2019.

A week earlier, Chicago’s shooting victims included a 1-year-old boy riding in a car with his mother and a 10-year-old girl who was shot by a bullet that pierced a window and struck her in the head as she sat on a couch at home.