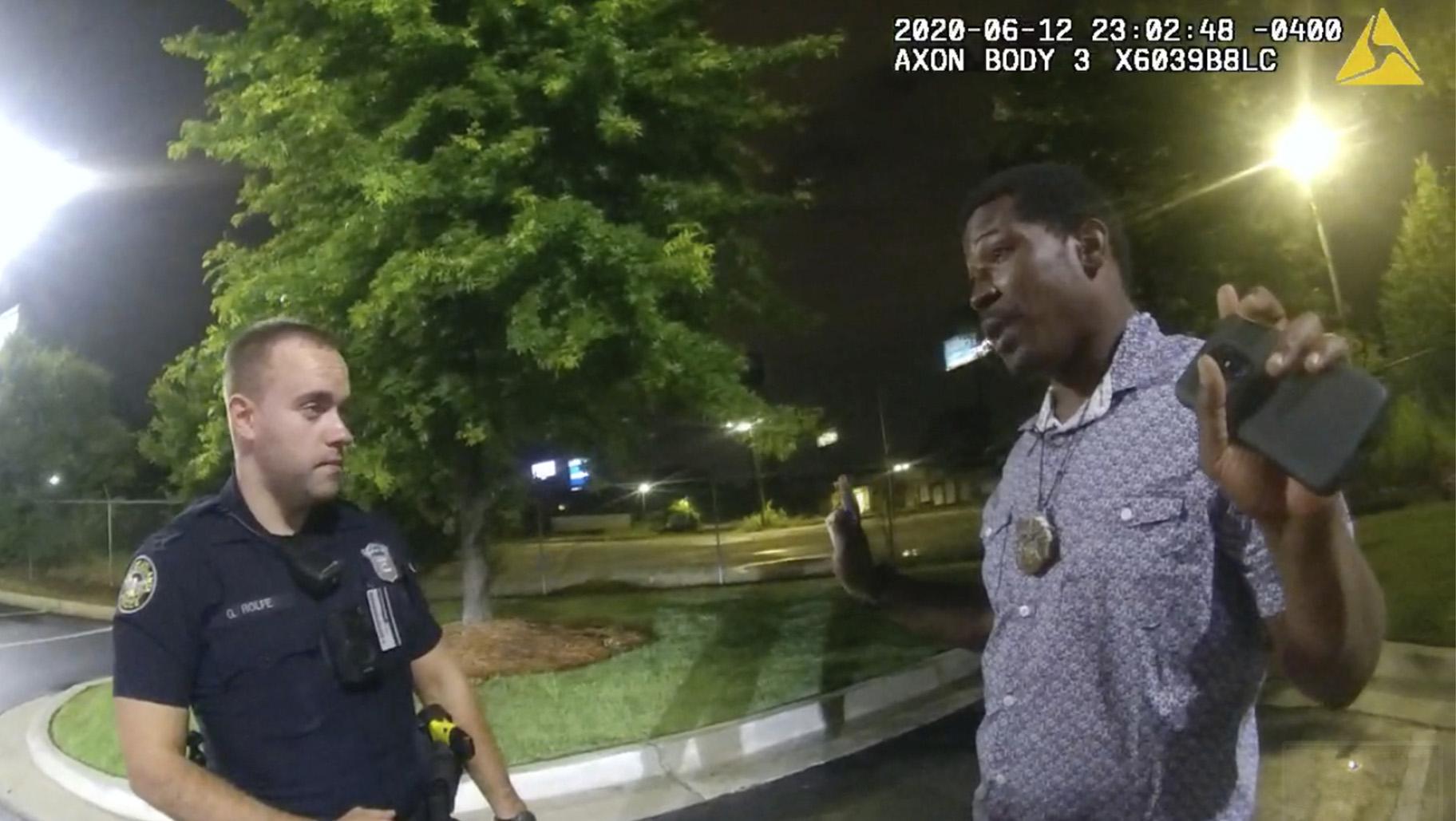 ATLANTA (AP) — Prosecutors brought murder charges Wednesday against the white Atlanta police officer who shot Rayshard Brooks in the back, saying that the black man posed no threat when he was gunned down and that the officer kicked him and offered no medical treatment as he lay dying on the ground.

Brooks was holding a stun gun he had snatched from officers but was 18 feet, 3 inches away when he was shot by Garrett Rolfe and was running away at the time, District Attorney Paul Howard said in announcing the charges five days after the killing outside a Wendy’s restaurant rocked the city.

The felony murder charge against Rolfe carries life in prison without parole or the death penalty. He was also charged with 10 other offenses punishable by decades behind bars.

“Mr. Brooks never presented himself as a threat,” Howard said.

A second officer with Rolfe, Devin Brosnan, stood on a wounded Brooks’ shoulder as he struggled for his life, according to Howard. Brosnan was charged with aggravated assault and other offenses but is cooperating with prosecutors and will testify, according to the district attorney, who said it was the first time in 40 such cases in which an officer has come forward to do this.

Rolfe was fired after shooting, while Brosnan was placed on leave.

The news came as Republicans on Capitol Hill unveiled a package of police reform measures and the movement to get rid of Confederate movements and other racially offensive symbols reached America’s breakfast table, with the maker of Aunt Jemima syrup and pancake mix dropping the 131-year-old brand.

The shooting sparked new demonstrations in Georgia’s capital against police brutality, after occasionally turbulent protests in response to George Floyd’s death in Minneapolis had largely simmered down. Atlanta Police Chief Erika Shields resigned less than 24 hours after Brooks died, and the fast-food restaurant was burned.

Police were called to the restaurant over complaints of a car blocking the drive-thru lane. An officer found Brooks asleep behind the wheel of the car, and a breath test showed he was intoxicated.

Police body camera video showed Brooks and officers having a relatively calm and respectful conversation for more than 40 minutes before things rapidly turned violent. Brooks wrestled with officers, snatched one of their stun guns and pointed it at one of them as he ran through the parking lot.

An autopsy found that Brooks was shot twice in the back.

Ahead of the district attorney’s scheduled announcement, Rolfe’s lawyers issued a statement saying the officer feared for his safety and that of others around him and was justified in shooting Brooks. Rolfe opened fire after hearing a sound “like a gunshot and saw a flash in front of him.”

“Mr. Brooks violently attacked two officers and disarmed one of them. When Mr. Brooks turned and pointed an object at Officer Rolfe, any officer would have reasonably believed that he intended to disarm, disable, or seriously injure him,” the lawyers said.

An attorney for the Brooks family said previously that Rolfe should be charged for “an unjustified use of deadly force, which equals murder.”

Wednesday’s decision in Atlanta comes as the country is experiencing a dramatic shift in its opinions on policing and race. A new poll by The Associated Press-NORC Center for Public Affairs Research finds that more Americans today than five years ago believe police brutality is a very serious problem that too often goes undisciplined and unequally targets black Americans.

Elsewhere around the country, Senate Republicans in Washington announced the most ambitious GOP police-reform package in years, including an enhanced use-of-force database, restrictions on chokeholds and new commissions to study law enforcement and race.

The 106-page bill is not as sweeping as a Democratic proposal set for a House vote next week, but it shows how swiftly the national debate has been transformed since Floyd’s death.

The Senate’s lone black Republican, Tim Scott of South Carolina, led a task force of GOP senators in compiling the package and spoke of his own experiences being stopped by police.

“We hear you,” he said to the families of Americans killed by police. “We’re listening to your concerns.”

Meanwhile, Quaker Oats said it is getting rid of its Aunt Jemima brand because the character was “based on a racial stereotype.” While Aunt Jemima’s image on packages was changed in recent years to make her look like a modern housewife, she was for most of her existence a stout, kerchief-wearing figure who evoked the plantation-era “Mammy” stereotype.

The owner of the Uncle Ben’s brand of rice likewise said it will “evolve” in response to concerns about racial stereotyping.

The University of Nevada, Las Vegas removed a statue of its “Hey Reb!” mascot outside its alumni center, and Houston officials took down a figure of a Confederate soldier in a downtown park.

New York’s governor signed an executive order recognizing Juneteenth as a paid holiday for state employees to commemorate the emancipation of slaves in the U.S. It has been a state holiday in Texas since 1980, and Virginia’s governor has also proposed making it a state holiday.

In the Minneapolis case, Derek Chauvin, the officer who put his knee on Floyd’s neck for several minutes as he pleaded he couldn’t breathe, has been charged with murder. Three other officers have been charged with aiding and abetting. All four were fired and could get up to 40 years in prison. 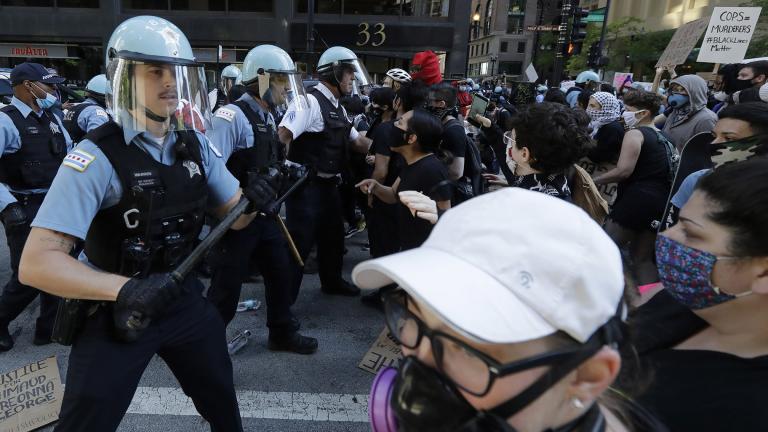 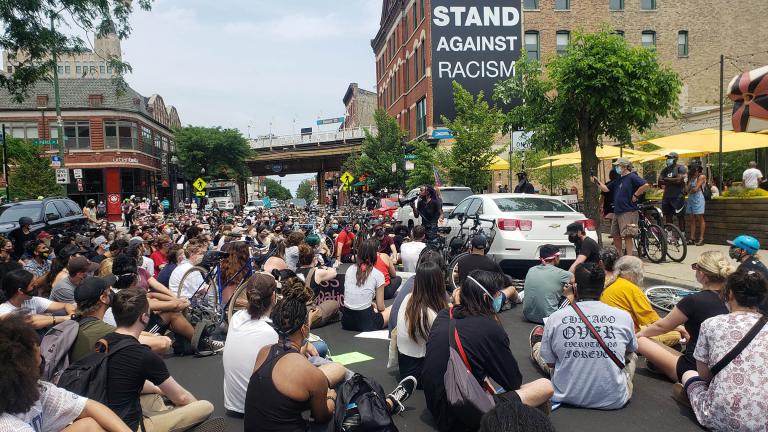