Protests, Some Violent, Spread in Wake of George Floyd Death 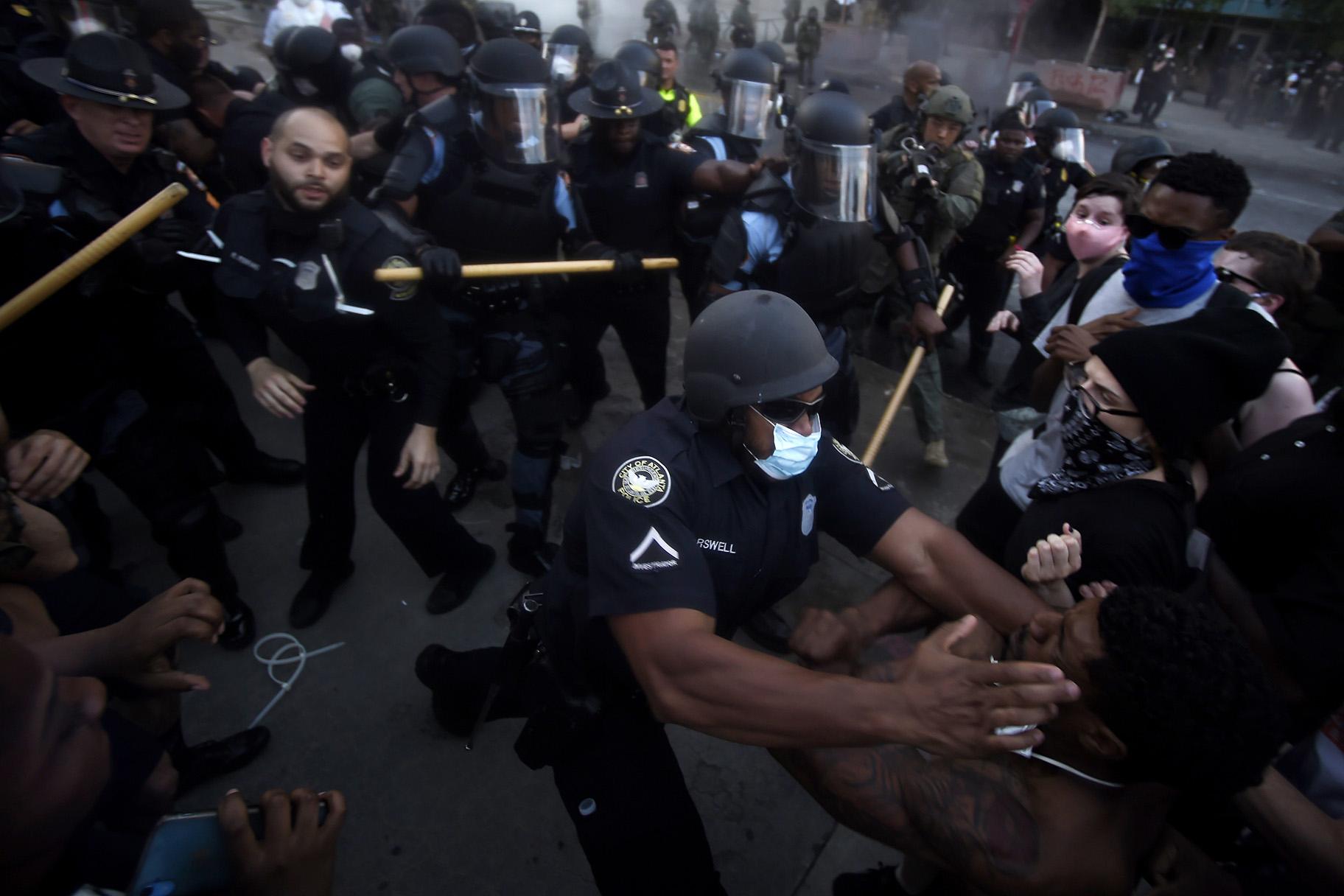 Police officers and protesters clash near CNN Center, Friday, May 29, 2020, in Atlanta, in response to George Floyd’s death in police custody in Minneapolis on Memorial Day. The protest started peacefully earlier in the day before demonstrators clashed with police. (AP Photo / Mike Stewart)

ATLANTA (AP) — Demonstrators marched, stopped traffic and in some cases lashed out violently at police as protests erupted Friday in dozens of U.S. cities following the killing of George Floyd after a white officer pressed a knee into his neck while taking him into custody in Minnesota.

Georgia’s governor declared a state of emergency in one county to activate up to 500 members of the state National Guard “to protect people & property in Atlanta.”

Gov. Brian Kemp said in a pair of tweets early Saturday that the move came at the request of Atlanta Mayor Keisha Lance Bottoms and in consultation with emergency officials. The Georgia National Guard will deploy “immediately” to assist law enforcement, he said.

In Minneapolis, where a police precinct was burned the night before, peaceful protests picked up steam as darkness fell, with thousands of people ignoring an 8 p.m. curfew to walk streets in the southern part of the city. Some cars were set on fire in scattered neighborhoods, business break-ins began and eventually there were larger fires. As a pair of restaurants and a Wells Fargo branch were set ablaze, a heavy contingent of National Guard, state troopers and police moved in, some on foot and some in vehicles.

In Phoenix, Denver, Las Vegas, Los Angeles and beyond, thousands of protesters carried signs that said: “He said I can’t breathe. Justice for George.” They chanted “”No justice, no peace” and “Say his name. George Floyd.”

After hours of peaceful protest in downtown Atlanta, some demonstrators suddenly turned violent, smashing police cars, setting one on fire, spray-painting the iconic logo sign at CNN headquarters, and breaking into a restaurant. The crowd pelted officers with bottles, chanting “Quit your jobs.”

At least three officers were hurt and there were multiple arrests, Atlanta police spokesman Carlos Campos said. Campos said protesters shot BB guns at officers and threw bricks, bottles and knives at them. People watched the scene from rooftops, some laughing as skirmishes broke out. 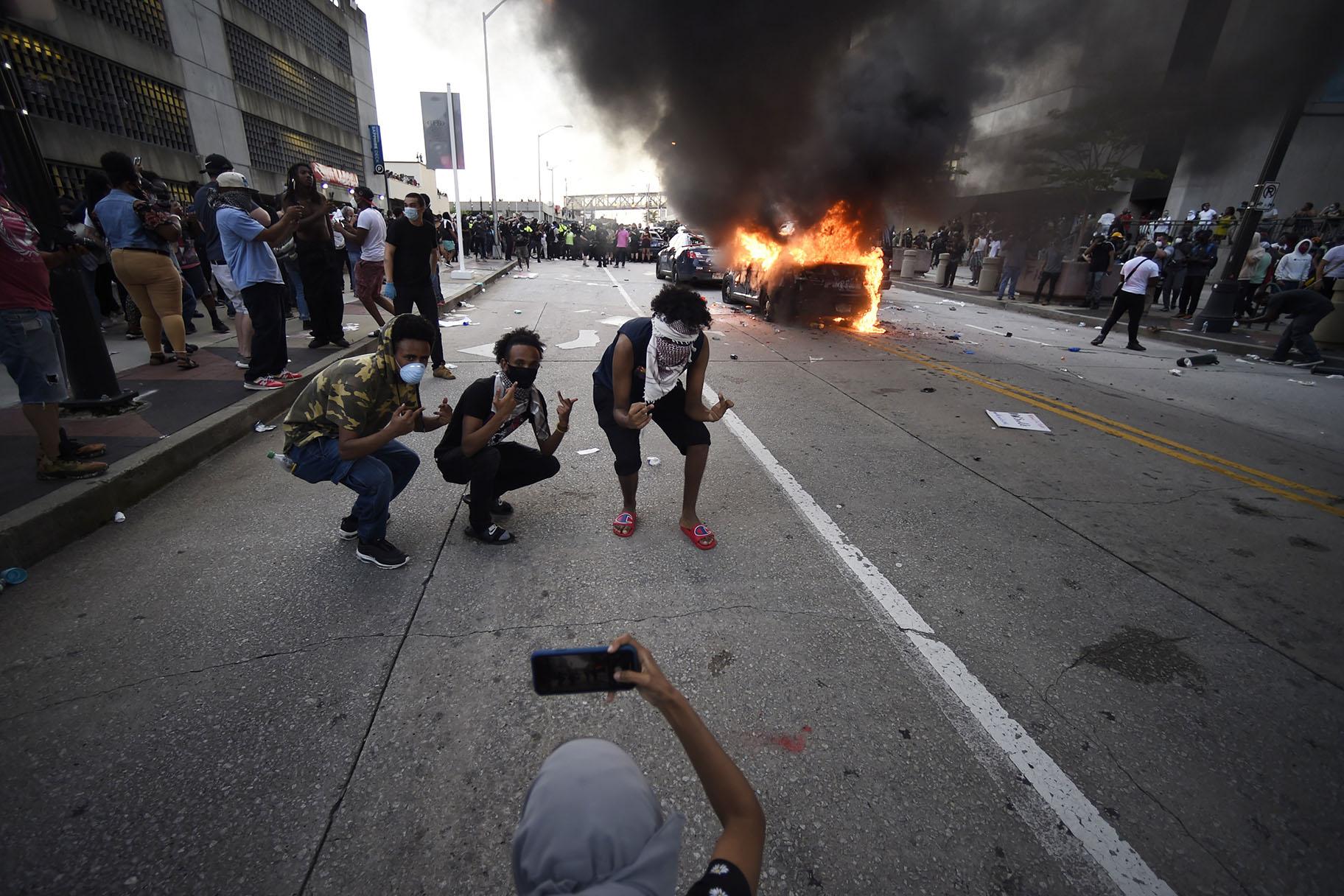 An Atlanta Police Department vehicle burns as people pose for a photo during a demonstration against police violence, Friday, May 29, 2020, in Atlanta. (AP Photo / Mike Stewart)

Bottoms passionately addressed the protesters at a news conference: “This is not a protest. This is not in the spirit of Martin Luther King Jr.”

Bottoms was flanked by rappers T.I. and Killer Mike, as well as King’s daughter, Bernice King.

Killer Mike cried as he spoke.

After Mayor Bottoms appealed for calm, the violence continued. More cars were set on fire, a Starbucks was smashed up, the windows of the College Football Hall of Fame were broken, and the iconic Omni Hotel was vandalized.

Protesters gathered outside the White House, with President Donald Trump inside, and some tried to push through barriers set up by the U.S. Secret Service along Pennsylvania Avenue.

In Brooklyn, activists who had marched from Manhattan chanted insults at officers lined up outside the Barclays Center and pelted them with water bottles. Police sprayed an eye-irritating chemical into the largely diverse crowd multiple times, then cleared the plaza.

Video posted to social media showed officers using batons and shoving protesters down as they took people into custody and cleared streets. 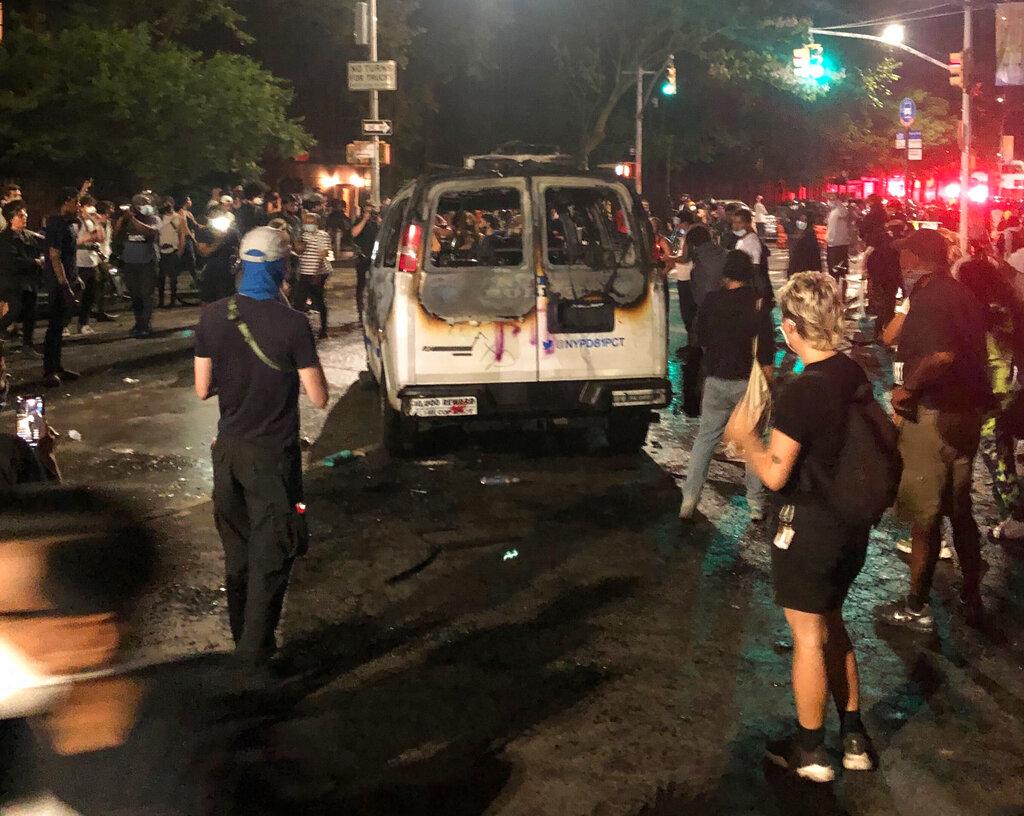 Demonstrators rocked a police van, set it ablaze, then scrawled graffiti across its charred hulk and set it on fire a second time as officers retreated from the area. Blocks away, protesters used a club to batter another police vehicle.

Numerous people were arrested and police brought in buses to carry off those they arrested.

“We have a long night ahead of us in Brooklyn,” Mayor Bill de Blasio tweeted. “Our sole focus is deescalating this situation and getting people home safe. There will be a full review of what happened tonight. We don’t ever want to see another night like this.”

The police department said numerous officers were injured, including one who had a tooth knocked out.

The names of black people killed by police, including Floyd and Eric Garner, who died on Staten Island in 2014, were on signs carried by those in the crowd, and in their chants.

“It’s my duty to be out here,” said Brianna Petrisko, among those at Foley Square in lower Manhattan, where most were wearing masks amid the coronavirus pandemic. “Our country has a sickness. We have to be out here. This is the only way we’re going to be heard.”

In Houston, where George Floyd grew up, several thousand people rallied in front of City Hall. Among them was 19-year-old Jimmy Ohaz, who came from the nearby city of Richmond, Texas.

“My question is how many more, how many more? I just want to live in a future where we all live in harmony and we’re not oppressed.”

About 1,000 protesters gathered in Oakland. They smashed windows, sprayed buildings with “Kill Cops” graffiti and were met with chemical spray from police. Oakland Police were notifying a crowd that the demonstrationwas an unlawful assembly. Authorities said officers were injured when projectiles were thrown and that they were asking people to leave the area.

Demonstrators in Los Angeles scuffled at times with police, with a few protesters detained and one officer receiving medical treatment, police said. An LAPD vehicle had its windows smashed, and CNN reported that someone wrote “killer” on a patrol car.

Protesters repeatedly clashed with police in the Silicon Valley city of San Jose, said Mayor Sam Liccardo, and police responded with flash-bang grenades and rubber bullets. One officer was being treated at a hospital for an injury that was not life-threatening, he and police officials said.

Liccardo said his own officers shared the community’s outrage over Floyd’s in-custody death.

“It was a horrible injustice. I’d venture to guess that every police officer out there feels much of the same anger about what happened in Minneapolis,” he told The Associated Press.

Thirty miles to the west, Santa Cruz police chief Andrew G. Mills said in a statement that the actions by Minneapolis officers in Floyd’s death “are the antithesis of what we view as good policing.”