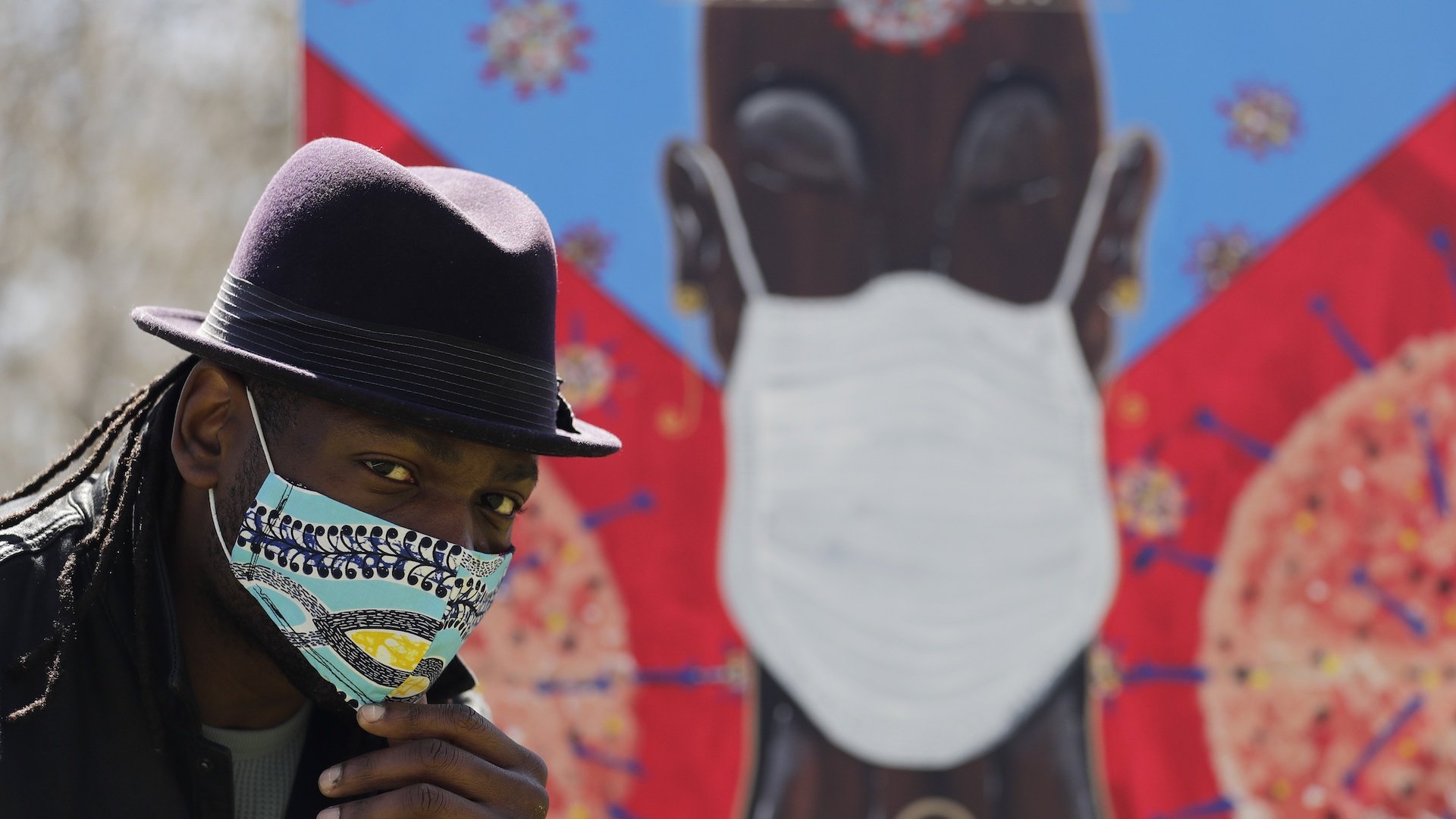 In this Tuesday, April 21, 2020 photo, Obi Uwakwe poses with his painting in Chicago. Uwakwe is an artist/photographer and submitted his art work to the the Illinois State Museum, which is documenting what daily life is like for Illinois families during the coronavirus pandemic. (AP Photo/Nam Y. Huh)

CHICAGO (AP) — Artist Obi Uwakwe was driving through Chicago’s empty streets, camera on his lap to document life during COVID-19, when he saw something that made him stop: a casket being carried out of a church while a few mourners stood by, their faces covered.

The 43-year-old raised his camera and took a photograph. Later, it would become one of the images Uwakwe used to create paintings inspired by the pandemic.

“To see maybe six people there, everyone wearing a mask,” he said, “it brought everything together.”

Around the world, people like Uwakwe are creating photographs, paintings, emails, journals and social media posts that will shape how the world remembers the coronavirus pandemic for years and centuries to come. Museums and historical societies already are collecting materials, often with help from people accustomed to capturing and sharing even the most mundane moments around them.

The result, historians say, will be a collective memory more personal than perhaps any other moment in history.

“Everyone is touched by this. Everyone has a story,” said Erika Holst, curator of history at the Illinois State Museum, one of hundreds across the U.S. gathering pieces of a generational treasure trove. Collecting the items in real time allows historians to nudge people for the stories behind them — a luxury rarely available, Holst said.

“Usually as historians, we get a lot of numbers — the number of people who died, the number who got sick, the economic effect,” she said. “It doesn’t always capture what it felt like.”

The enormity of the event is forcing historians to balance capturing ephemeral moments and those that will transcend time.

At the Smithsonian’s National Museum of American History, a task force is looking into how to gather and preserve objects, images and documents that could become part of permanent collections. But the pandemic itself is challenging the group’s ability to collect because the museum is closed, so curators are asking potential donors to hold onto items.

“We are trying to take the long view on this, so (we are) focusing now most on objects that are ephemeral, things that might disappear, that might get thrown away or just used up,” said Benjamin Filene, the museum’s associate director of curatorial affairs.

Unlike during other national crises, people have a camera in their pocket at all times, documenting whatever they deem relevant and sharing it on social media, from the cloth mask they sew and the sourdough bread they baked to the cheer for front-line workers and the Zoom meeting of school students.

But not every quilt made or puzzle finished can tell the story of what happened in the U.S. in the spring of 2020.

“There is sort of this overwhelming mass of information, but that information is not necessarily being captured in a way that’s going to be preserved,” Filene said. “And there’s also the possibility that it is so fragmentary that how much will it translate to somebody else five years from now or 25 or 50 years from now? We don’t just need a thing; we want the story that goes with the thing.”

The National Museum of African American History and Culture has been working with doctors, nurses and other health workers who have offered to donate personal protective equipment. Senior curator for history William Pretzer said cultural organizations nowadays do “rapid-response collecting” and no longer wait until materials are considered memorabilia.

“You collected stuff because you had historical perspective on that event. You collected the Civil War 20 years after the Civil War. You collected World War II experience in the 1950s,” Pretzer said. “You didn’t do it immediately. Beginning in some ways with 9/11, however, it became clear that rapid-response collecting, collecting on the spot meant that you got the original evidence.”

Pretzer said the museum wants to “go behind the statistics” showing the virus has disproportionately affected people of color. and explain the reasons for the disparity and what can be done about it in the future.

“In other words, it’s not a race or color or ethnicity that determines this disproportionate impact. It’s the underlying conditions,” Pretzer said. “What’s the economic role? What kinds of jobs are available in that community? What kind of access to health care do people have? What type of access to healthy foods have they had? What access to transportation? What is education like in those communities?”

Technology is helping historians collect material and tell stories as well. The Historic New Orleans Collection, a museum and publishing house, is using technology known as a “spider” to crawl the web and collect information about how the pandemic is affecting the hard-hit city. Among its finds: the city’s cellphone alert system’s webpage.

The Maryland Historical Society is sharing posts on its blog and on social media using its own hashtags, #LettersFromtheHomeFrontMD and #CollectingInQuarantineMD. An April 16 entry includes a letter from a woman identified as Lauren from Darlington, Maryland, explaining her fears of contracting COVID-19 while at work. She said she works for the U.S. Postal Service, while her husband is an electrical foreman.

“I have two young children at home and I can not afford to stay home and only receive two-thirds of my pay,” she wrote. “We are both exposed to the world … My mother can not get this disease, it may kill her.”

Heather Voelz of Taylorville, Illinois, submitted a photo to the Illinois State Museum of her kids on Easter. But she said most of what she’s recording are things that “wouldn’t mean much to anyone but us.” Voelz and two of her children, ages 3 and 5, are keeping a kids’ journal she found online, and Voelz plans to put the pages in their baby books.

“I know they don’t fully grasp what is happening,” she said. “But they will someday.”

Zofia Oles, 18, of suburban Chicago started taking photos for her school photography class but kept at it to remember her senior year. Some photos show Oles dancing alone in her room, she and her brother going to the store and neighbors gathering — at a distance — in a parking lot.

“I want to have a memory of how it looked so when I am able to be with my friends again, I can appreciate how it was,” she said.

Uwakwe said recent weeks remind him of the days after 9/11, when streets were quiet and there was a collective sense of grieving, helping and appreciation for people on the front lines.

Uwakwe didn’t walk around with a camera back then. In the years since, he’s thought about those missed images. It’s what ultimately moved him to get in his car and capture what’s happening.