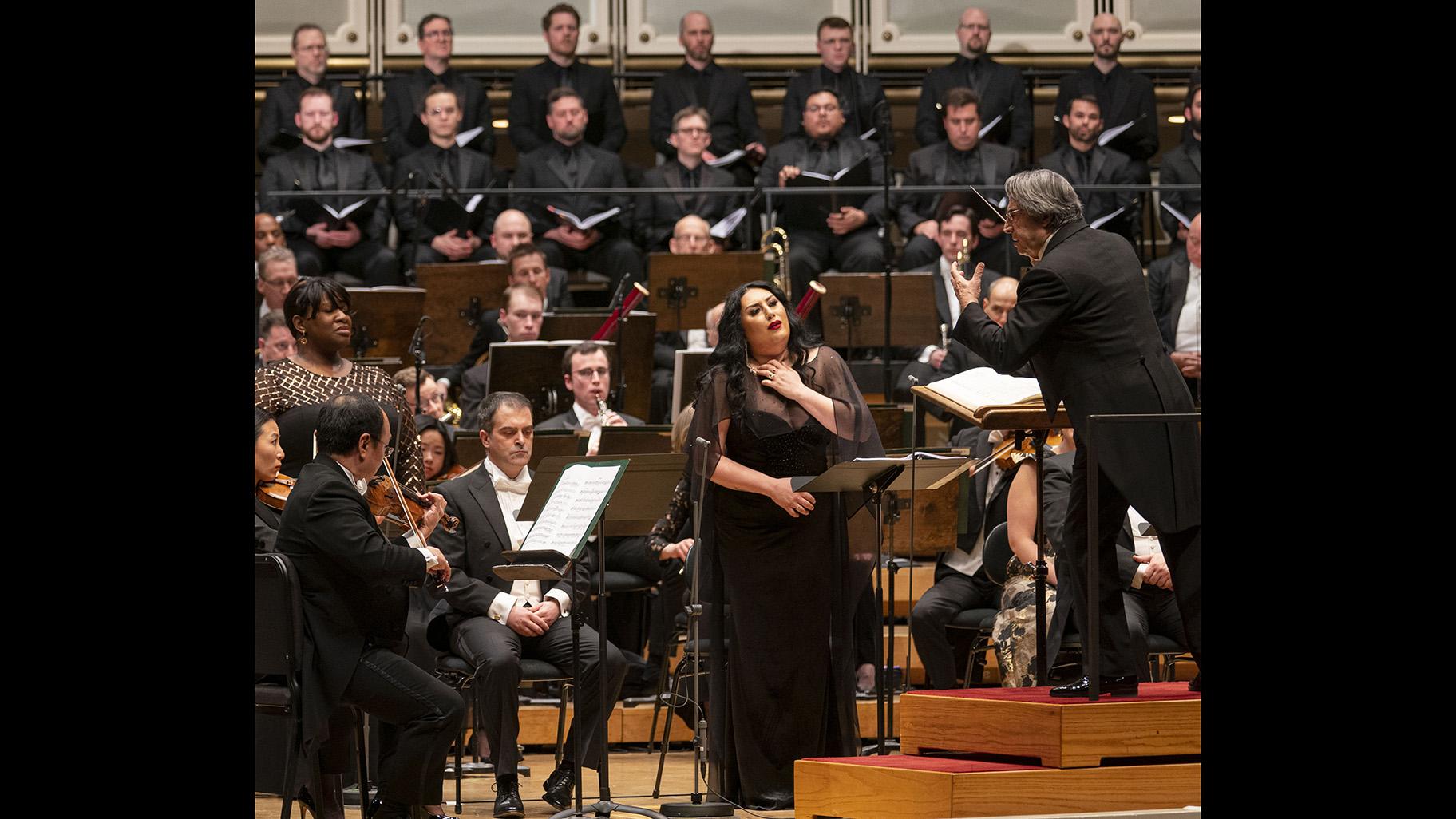 First, a confession: I was already riding high on some of my most thrilling childhood memories Thursday evening as I arrived at Symphony Center for the first of three concert performances of Mascagni’s opera, “Cavalleria Rusticana,” with Maestro Riccardo Muti leading the Chicago Symphony Orchestra and Chorus (the latter comprised of 140 glorious voices) and a formidable group of soloists. The one-act opera has long had a place in my heart. But the true magnificence of Mascagni’s 1890 work – now focused entirely on the beauty of the music and the “verismo” (realism and truthfulness) of the singers, and stripped of the distractions of scenery, melodramatic acting and all the rest – was a great revelation.

First, about those memories of the nights I spent on the stage of the old (pre-Lincoln Center) Metropolitan Opera House when, as an intense third grader wholly obsessed with ballet – and on scholarship at the opera house’s renowned ballet school – I was one of several children chosen to play a small role in what became a fabled Met production of the Mascagni work that starred Giulietta Simionato and Jan Peerce.

The scene was set on an Easter Sunday morning in a small Sicilian village, and as church chimes sounded it was my job to run onto the stage in a long, white cotton dress and little veil, and mischievously toss oranges with my friends. Then, as the priest came to the door of the church, we were given severely scornful looks and, full of contrition, we bowed our heads and dutifully got in line.

Suffice it to say, I was never quite the same again. I still remember eating those oranges with my mother during the long subway ride home to Queens, and the scent of the Max Factor stage makeup I wore for those performances has never faded.

Yes, intense nostalgia was at work as I listened to the familiar score that so feverishly drives the Mascagni opera and its story of love, betrayal, jealous rage and deadly violence. But that old Met production was theater, while for Muti the opera is pure musical soul food that needs no extraneous trappings. And he and his fellow artists could not have made the point to more bravura effect. 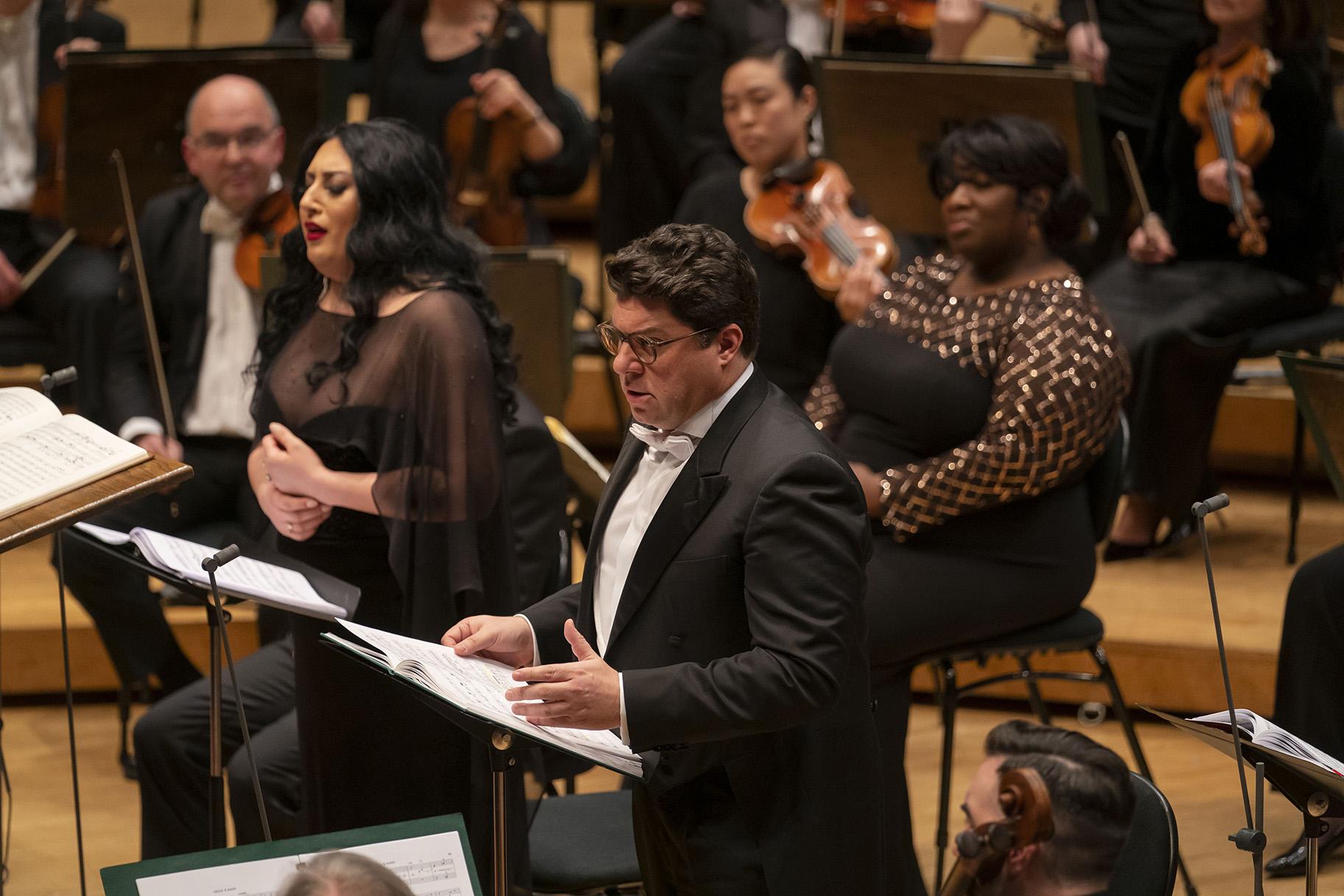 Every note of Mascagni’s glorious music defines the characters, captures their feverish passions and fierce code of honor, suggests the richness of rustic life, and serves as a reminder of the belief in the ever-present eye of God and the damnation sure to punish a sinner. Yet for all its grandeur, the opera retains a profoundly human quality. What’s more, hearing it in concert form underscores its radiance – the variety, seductive melodies and inherent drama of the composer’s work.

You hear this from the very start – in the exquisite lyricism of the “Siciliano”-style prelude, with its use of the harp (the impeccable Sarah Bullen), and in the opening aria by Turiddu (the mellifluous tenor Piero Pretti), the young peasant who has returned from military service, and is in thrall to his beloved Lola (the fine mezzo-soprano Sasha Cooke), who, in his absence, married Alfio (the vivid baritone Luca Salsi), a cart driver.

Turiddu’s illicit affair with Lola comes after he has seduced the peasant girl, Santuzza (the astonishing mezzo-soprano Anita Rachvelishvili, who also captivated audiences last year as Amneris, in a concert performance of “Aida”). Distraught by the betrayal of the man she loves, she confides in Turiddu’s mother, Lucia (the warm-voiced, expertly understated mezzo-soprano Ronnita Miller), and is driven into a jealous frenzy by her intense passion for her lover, and the knowledge that she has been disgraced on many levels.

The intensity of Santuzza’s emotions will, of course, ultimately end in tragedy for all involved. But before that catastrophic moment there is great beauty to savor: The heavenly initial sound of the women in the chorus singing of how “the orange trees in the green groves scent the air”; the hint of folk tunes as the men of the chorus sing of “the sweet rays of sunshine” in the corn fields; the sound of church chimes (percussionist Cynthia Yeh), timpani (David Herbert), and organ (Patrick Godon) as church-goers gather for the Easter service; the dark tones of the cellos as Santuzza talks to Lucia; the sharp cracks of a whip on the backs of the beasts that drive Alfio’s cart; the transcendent beauty of the chorus at the Easter church service; and the exuberant sound of a communal drinking song that takes on a dangerously ironic edge.

And then there is the commanding yet painfully vulnerable singing of Rachvelishvili, whose voice can make the most dramatic emotional shifts feel utterly real and intimate even as the sound is sublimely magnified. She is stunning. And so are her alternately angry and pleading duets with Pretti that are animated by her desperation and his sense of entrapment, as well as a crucial scene with Alfio that had one member of the audience audibly gasping (a response many others were no doubt stifling).

Muti, in top form, is not just a conductor here, but every bit the director, eliciting sounds from every section of the orchestra, chorus (masterfully directed by Duain Wolfe), and singers that flow through the Italian language itself, and at the same time take on a heightened yet never exaggerated expressiveness. Magic.

Note: On the morning after this concert the New York Times ran an obituary of Nello Santi, the 88-year-old conductor “who saw no need for excess in Italian opera.” Muti’s rendering of “Cavalleria Rusticana” could easily serve as a tribute to his philosophy.