The severed arm of a giant squid, hauled in by a fishing vessel off the coast of New Zealand, may have had little value as seafood to its captors, but it has proven to be priceless to researchers in their attempt to unlock the mysteries of one of the ocean’s most elusive creatures.

Despite giant squids’ massive size — typically measuring more than 30 feet long with eyes as big as dinner plates — they’ve seldom been spotted alive. Such sightings of giant squids are so rare, if their carcasses didn’t occasionally wash ashore or their beaks turn up in the bellies of whales, the cephalopod’s existence might still be debated as more myth than fact.

Bits and pieces of giant squids have been fished out of the ocean’s stew before. What made this particular arm so valuable was its freshness. That meant DNA, which otherwise falls apart quickly as an organism decomposes, could be extracted, giving scientists a unique opportunity to crack the giant squid’s genetic makeup.

“This was a really lucky find,” said biologist Carrie Albertin. “They were able to get it and freeze it very quickly.” 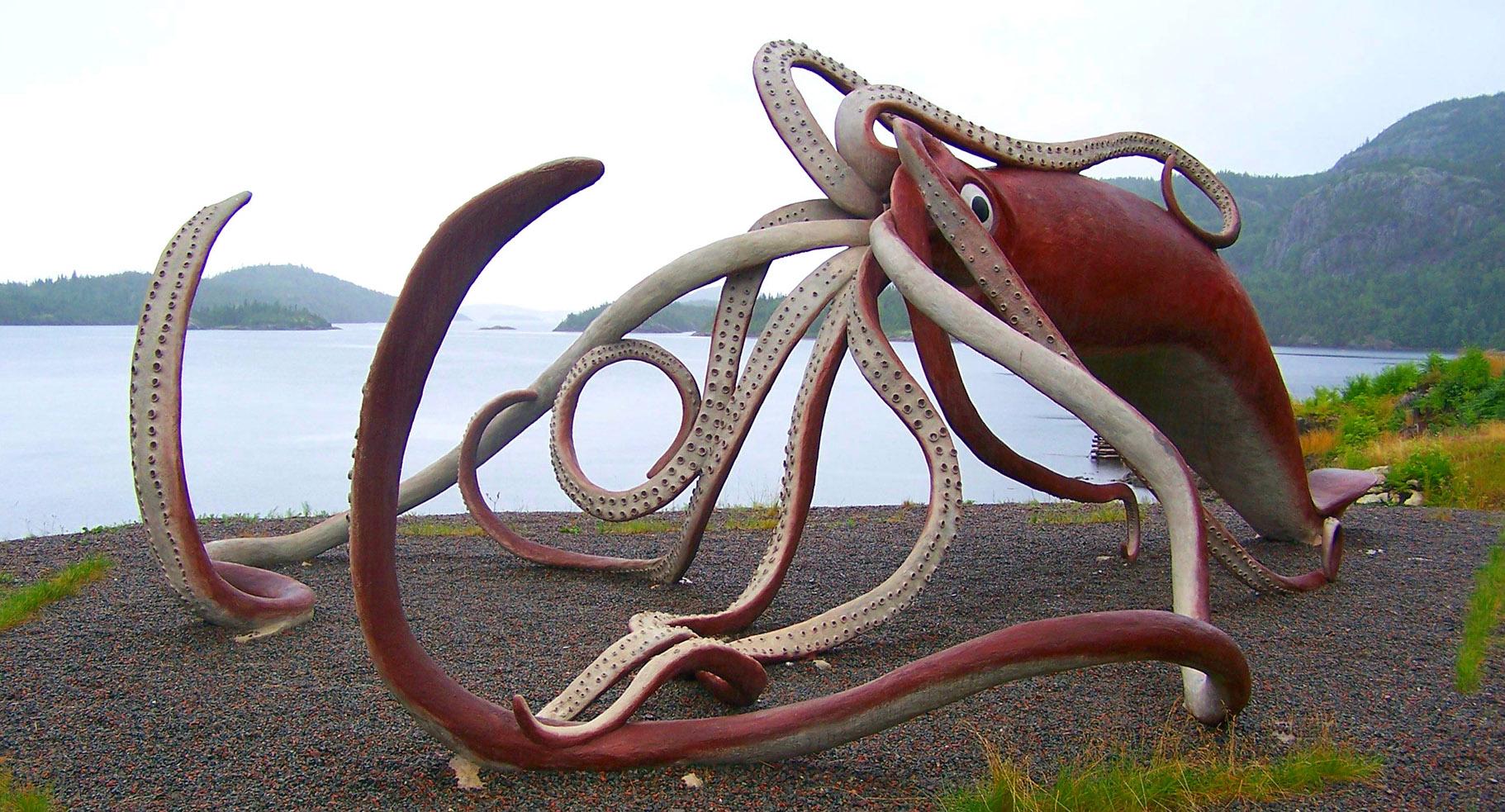 A model of a giant squid in Glover’s Harbour, Newfoundland. (Robert Hiscock / Flickr)

Albertin was part of the team that recently published the giant squid’s full genome sequence, an exciting development that’s just the tip of the iceberg in terms of discoveries still to come.

“We’ve only scratched the surface of what we can find in this genome,” said Albertin, who works out of the Marine Biological Laboratory in Woods Hole, Massachusetts.

Albertin was recruited to the group of giant squid genome researchers given her previous sequencing of the genome of the octopus, another member of the cephalopod family. That work, released in 2015, had formed the basis of her doctoral thesis at the University of Chicago, conducted under the guidance of associate professor Clifton Ragsdale.

Though the octopus and giant squid’s paths diverged 270 million years ago — before the age of the dinosaurs, Albertin offered for a frame of reference — Albertin’s fellow scientists were keen to see whether some of her exciting findings in the octopus genome might also be present in the giant squid’s.

Specifically, Albertin had identified in the octopus a group of genes previously only found in vertebrates, responsible for the wiring of the nervous system and development of complicated brains.

Fifty to 60 of these genes are present in humans. Albertin found 168 in the octopus, which could help explain such complex behavior as the creature’s incredible camouflage abilities.

Thrillingly, Albertin found 130 of these genes present in the giant squid.

Genomes, she explained, contain the entirety of an organism’s genes.

“They’re like an instruction manual,” Albertin said. “They’re all of the instructions you need to build that organism. It’s telling us about the rules of making an animal. [Giant squids] have this common link with us, maybe there are common rules for how you make a big brain.”

Up to this point, biologists have largely focused on building a greater understanding of humans and closely related groups such as primates. Albertin, who’s always been more interested in the “weird animals,” said there’s much to be gained by casting a wider net.

Isolating the genes that allow an octopus to change colors or the giant squid to grow so big so fast (their lifespan is thought to be a brief five years) teach us not just about these creatures, but ourselves, she said.

“Different animals have come up with different solutions to the same problem,” said Albertin. “We can use it to see how we work.”

And then there are the pie-in-the-sky applications of genome research.

Squids’ feeding tentacles, for example, are ringed with a hard but flexible substance that’s like plastic, only it’s made from a protein. “Imagine if we could make plastic from protein instead of petroleum,” Albertin said.