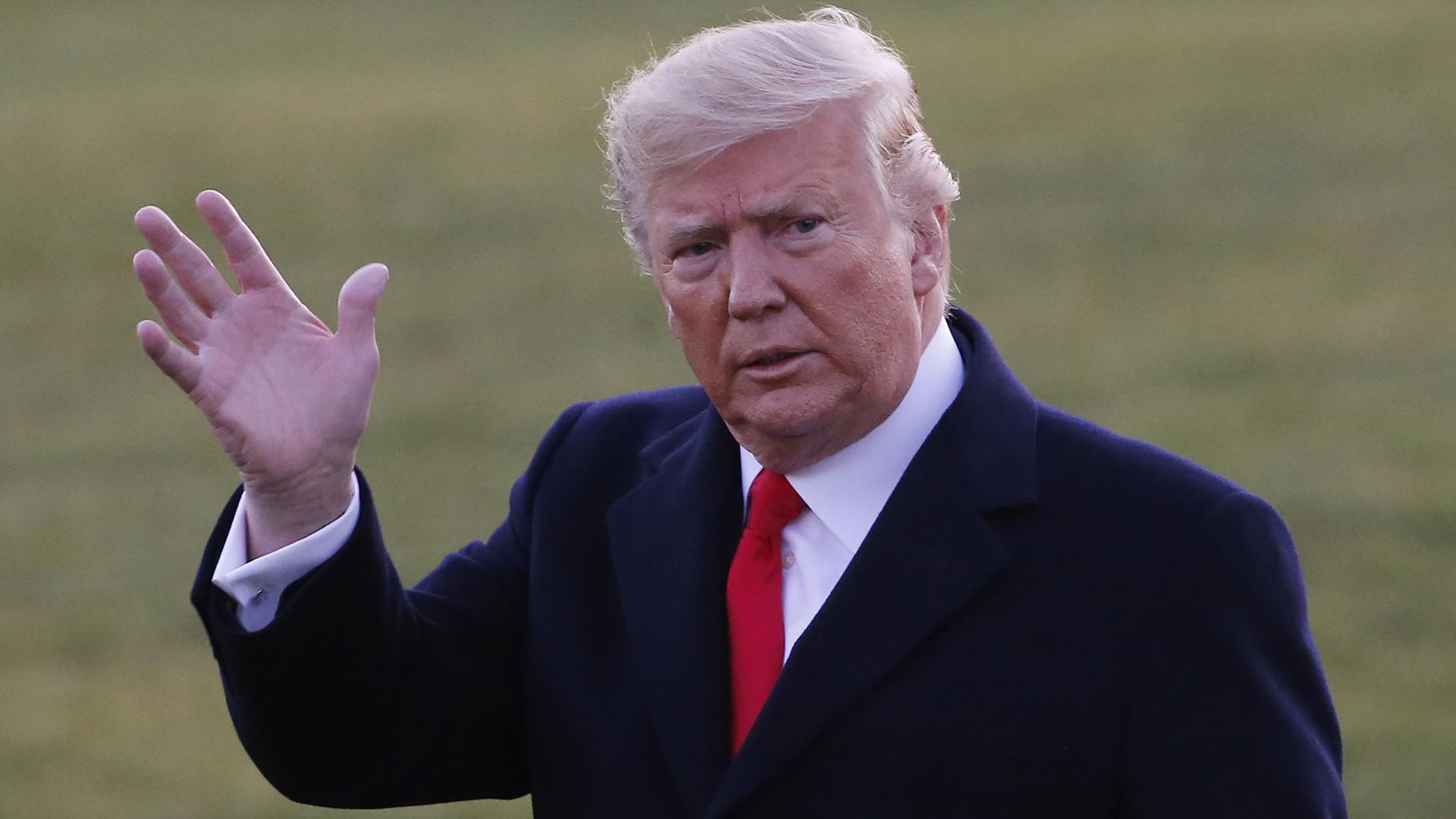 WASHINGTON (AP) — President Donald Trump was impeached by the U.S. House of Representatives on Wednesday night, becoming only the third American chief executive to be formally charged under the Constitution’s ultimate remedy for high crimes and misdemeanors.

The historic vote split along party lines, much the way it has divided the nation, over a charge that the 45th president abused the power of his office by enlisting a foreign government to investigate a political rival ahead of the 2020 election. The House then approved a second charge, that he obstructed Congress in its investigation.

The articles of impeachment, the political equivalent of an indictment, now go to the Senate for trial. If Trump is acquitted by the Republican-led chamber, as expected, he still would have to run for reelection carrying the enduring stain of impeachment on his purposely disruptive presidency.

He saw the blame flowing the other direction. He told a political rally in Michigan that “crazy Nancy Pelosi’s House Democrats have branded themselves with an eternal mark of shame.”

Democrats led Wednesday night’s voting, framed in what many said was their duty to protect the Constitution and uphold the nation’s system of checks and balances. Republicans stood by their party’s leader, who has frequently tested the bounds of civic norms. Trump called the whole affair a “witch hunt,” a “hoax” and a “sham,” and sometimes all three.

The trial is expected to begin in January in the Senate, where a vote of two-thirds is necessary for conviction. While Democrats had the majority in the House to impeach Trump, Republicans control the Senate and few if any are expected to diverge from plans to acquit the president ahead of early state election-year primary voting.

Pelosi, once reluctant to lead Democrats into a partisan impeachment, gaveled both votes closed, risking her majority and speakership to follow the effort to its House conclusion.

“Today we are here to defend democracy for the people,” she said earlier during floor debate. 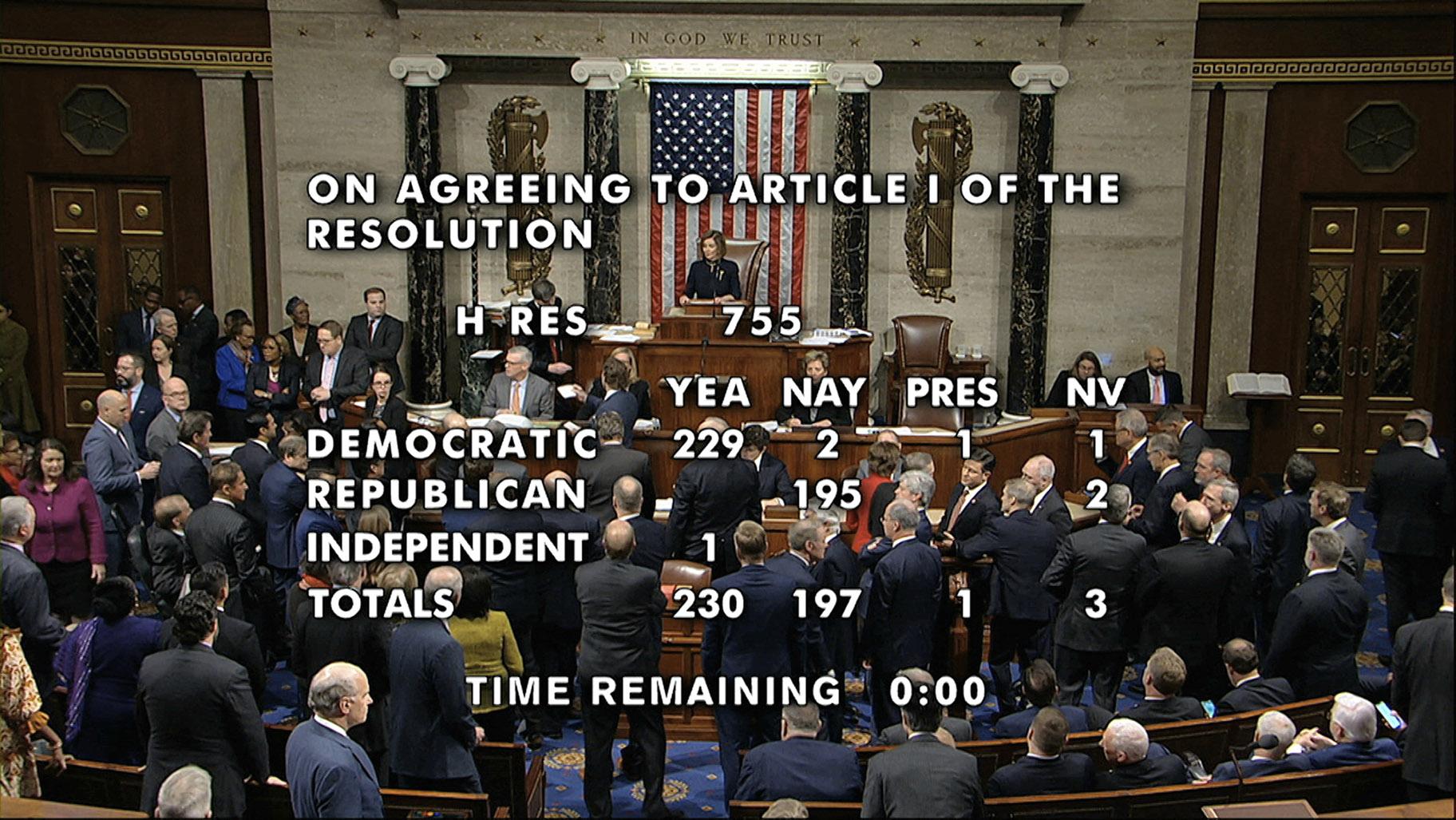 The vote total showing the passage of the first article of impeachment, abuse of power, against President Donald Trump by the House of Representatives at the Capitol in Washington, Wednesday, Dec. 18, 2019. (House Television via AP)

Trump, who began Wednesday tweeting his anger at the proceedings, pumped his fist before an evening rally in Battle Creek, Michigan, boasting o f “tremendous support” in the Republican Party and saying, “By the way it doesn’t feel like I’m being impeached.”

No Republicans voted for impeachment, and Democrats had only slight defections on their side. Voting was conducted manually with ballots, to mark the moment.

On the first article, abuse of power, two Democrats, Rep. Jeff Van Drew of New Jersey, who is considering switching parties to become a Republican, and Rep. Collin Peterson of Minnesota voted against impeaching Trump. On the second article, obstruction, those two and freshman Rep. Jared Golden of Maine voted against impeachment. Democratic Rep. Tulsi Gabbard of Hawaii, who is running for president, voted “present” on both.

What Pelosi called a sad and solemn moment for the country, coming in the first year that Democrats swept control of the House, unfolded in a caustic daylong session that showcased the nation’s divisions — not only along party lines, but also by region, race and culture.

The House impeachment resolution laid out in stark terms the two articles of impeachment against Trump stemming from his July phone call when he asked the Ukraine president for a “favor” — to announce it was investigating Democrats ahead of the 2020 election. He also pushed Ukrainian President Volodymyr Zelenskiy to probe unsubstantiated corruption allegations against Joe Biden, the former vice president and 2020 White House contender.

At the time, Zelenskiy, a young comedian newly elected to politics, was seeking a coveted White House visit to show backing from the U.S. ally as it confronts a hostile Russia at its border. He was also counting on $391 million in military aid already approved by Congress. The White House delayed the funds, but Trump eventually released the money once Congress intervened.

Narrow in scope but broad in its charge, the resolution said the president “betrayed the nation by abusing his high office to enlist a foreign power in corrupting democratic elections,” and then obstructed Congress’ oversight like “no president” in U.S. history.

“President Trump, by such conduct, has demonstrated that he will remain a threat to national security and the Constitution if allowed to remain in office,” it said.

Republicans argued that Democrats are impeaching Trump because they can’t beat him in 2020.

“This vote is about one thing, and one thing only: They hate this president,” said Rep. Chris Stewart, R-Utah. “They want to take away my vote and throw it in the trash.”

But Democrats warned the country cannot wait for the next election to decide whether Trump should remain in office because he has shown a pattern of behavior, particularly toward Russia, and will try to corrupt U.S. elections in 2020.

“The president and his men plot on,” said Chairman Adam Schiff, D-Calif., of the Intelligence Committee that led the inquiry. “The danger persists. The risk is real.”

The outcome brings the Trump presidency to a milestone moment that has building almost from the time the New York businessman-turned-reality-TV host unexpectedly won the White House in 2016 amid questions about Russian interference in the U.S. election – and the rise of the “resistance.”

Democrats drew from history, the founders and their own experiences, as minorities, women and some immigrants to the U.S., seeking to honor their oath of office to uphold the constitution. Rep. Lou Correa, D-Calif., spoke in Spanish asking God to unite the nation. “In America,” said Rep. Hakeem Jeffries, D-N.Y., “no one is above the law.”

The political fallout from the vote will reverberate across an already polarized country with divergent views of Trump’s July phone call when Trump asked Zelenskiy to investigate Democrats in the 2016 election, Biden and his son, Hunter, who worked on the board of a gas company in Ukraine while his father was the vice president.

Trump has repeatedly implored Americans to read the transcript of the call he said was “perfect.” But the facts it revealed, and those in an anonymous whistleblower’s complaint that sparked the probe, are largely undisputed.

More than a dozen current and former White House officials and diplomats testified for hours. The open and closed sessions under oath revealed what one called the “irregular channel” of foreign policy run by Trump’s personal lawyer Rudy Giuliani, which focused on investigating the Bidens and alternative theories of 2016 election interference.

The question for lawmakers was whether the revelations amounted to impeachable offenses to be sent to the Senate for a trial.

Few lawmakers crossed party lines without consequence. Van Drew, who is considering changing parties over his opposition to impeachment, sat with Republicans. Rep. Justin Amash, the Michigan conservative who left the Republican party and became an independent over impeachment, said: “I come to this floor, not as a Republican, not as a Democrat, but as an American.”

Beyond the impeachments of Andrew Johnson or Bill Clinton, this first impeachment of the 21st century is as much about what the president might do in the future as what he did in the past. And unlike investigation of Richard Nixon, who resigned rather than face the House vote over Watergate, the proceedings against Trump are playing out in an America already of mixed views over Trump.

Rank and file Democrats said they were willing to lose their jobs to protect the democracy from Trump. Some newly elected freshman remained in the chamber for hours during the debate.

“This is not about making history, this is about holding a lawless president accountable,” said Rep. David Cicilline, D-R.I.

GOP Rep. Doug Collins of Georgia said of the Democrats: “You’ve been wanting to do this ever since the gentleman was elected.’’

Top Republicans, including Rep. Devin Nunes on the Intelligence Committee, called the Ukraine probe little more than the low-budget sequel to former special counsel Robert Mueller’s investigation of Russian interference in the 2016 election.

Mueller spent two years investigating the potential links between Moscow and the Trump campaign, but testified in July that his team could not establish that Trump conspired or coordinated with Russia to throw the election. Mueller did say he could not exonerate Trump of trying to obstruct the investigation, but he left that for Congress to decide.

The next day, Trump called Ukraine. Not quite four months later, a week before Christmas, Trump was impeached.

What to Watch as Trump Impeachment Moves to House Floor

The Week in Review: Trump Lashes Out After House Panel Vote