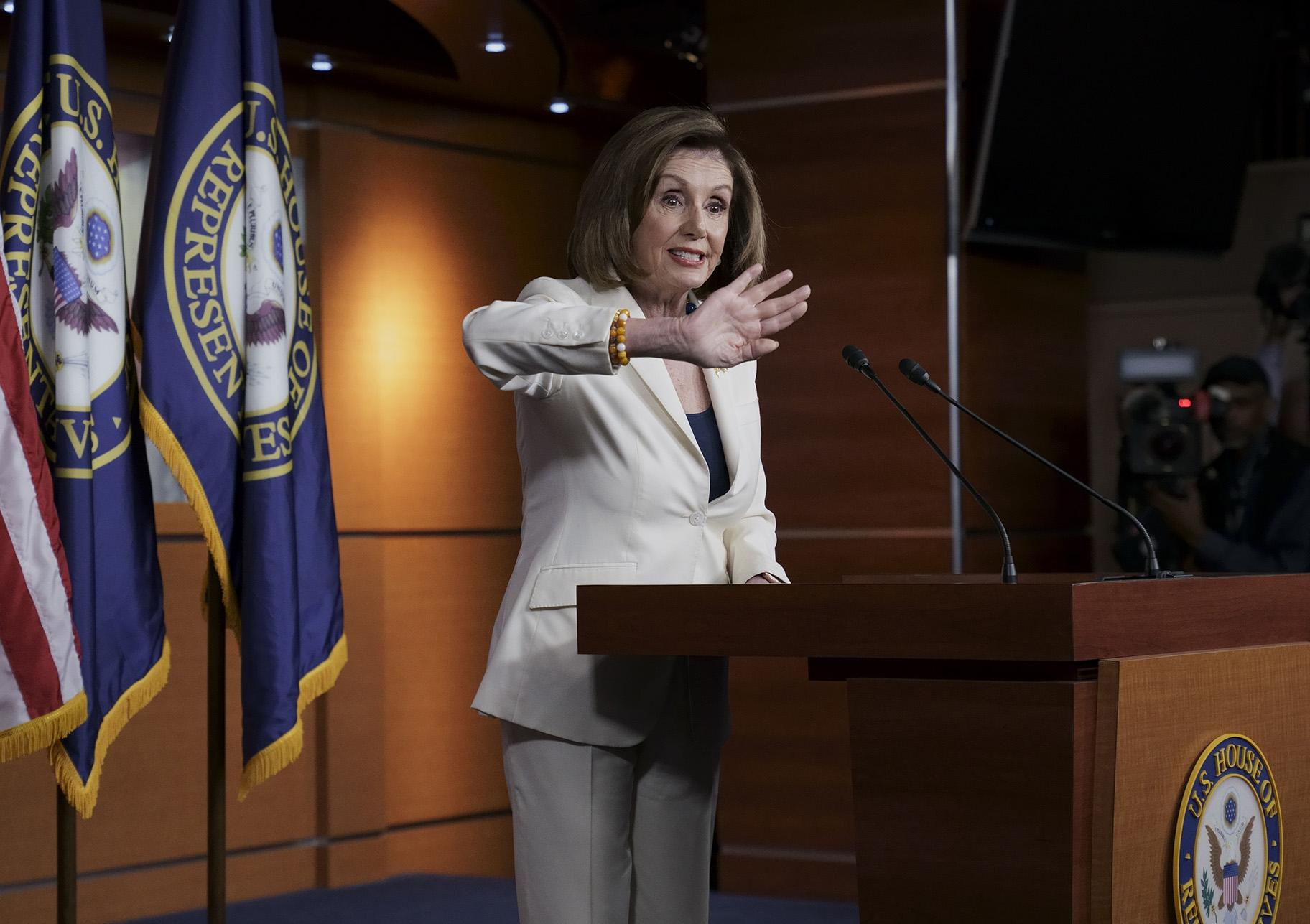 Speaker of the House Nancy Pelosi, D-Calif., responds forcefully to a question from a reporter who asked if she hated President Trump, after announcing earlier that the House is moving forward to draft articles of impeachment against Trump, at the Capitol in Washington, Thursday, Dec. 5, 2019. (AP Photo / J. Scott Applewhite)

WASHINGTON (AP) — House Democrats are charging toward impeaching President Donald Trump but not without pockets of division, as lawmakers who began the summer divided largely rallied Thursday behind Speaker Nancy Pelosi’s cry that his actions leave them “no choice but to act.”

The California Democrat’s announcement that she was asking committee chairs to begin crafting articles of impeachment hardly staunched grumbling that the effort was risky for swing district lawmakers whose 2018 victories gave the party House control. But the strong consensus among Democrats was that the time had come to plunge forward.

“There’s certainly some anxiety among the more vulnerable members about how this cuts, but a broad acceptance that this moment has found us,” said Rep. Jared Huffman, D-Calif. “It’s not something we could avoid.”

That’s not to say there weren’t dissidents.

Freshman Democratic Rep. Jeff Van Drew, an impeachment skeptic all year, said he remained opposed to the effort unless new evidence emerged. He said that should the Democratic-led House vote to impeach Trump — effectively charge him with offenses, which seems all but certain — the Republican-controlled Senate will refuse to oust him from office. That would let Trump claim vindication and result in “tearing the country apart,” said Van Drew, a freshman whose southern New Jersey district narrowly favored Trump in 2016.

“People are going to be angry at each other. I mean constituents,” said Van Drew, who is one of his party’s more endangered lawmakers in next November’s elections.

Also keeping his distance was Rep. Max Rose, D-N.Y., another freshman whose Staten Island-centered district backed Trump in 2016 and who won his own seat by a thin margin” last year.

‘‘I’m uncomfortable until I see the articles” of impeachment, said Rose, referring to the formal charges that House Democrats will craft in coming days. “That’s the most important things. When you can see the articles, that’s when one can entertain whether one’s comfortable or not.”

Republicans were already playing offense on an issue their leaders say will help them gain congressional seats in next November’s voting.

And the American Action Network, a big-spending GOP group that aids House Republicans, added Rep. Susie Lee, D-Nev., on Thursday to the nearly 40 House districts where it’s run $7 million worth of impeachment-themed TV or digital ads. The announcer says Lee should abandon the impeachment drive “and get to work on the issues that matter.”

Rep. Ami Bera, D-Calif., a leader of House Democrats’ efforts to protect vulnerable lawmakers, said that wouldn’t stop them from backing impeachment. Most of the more than 40 so-called “Frontline” members are freshmen from closely divided districts.

‘‘I suspect the vast majority of folks” will support impeachment, Bera said, “‘and then they’ll have to articulate that in the best way possible for that particular district.” He said party leaders are urging lawmakers to emphasize “helping our constituents, doing things back home” like getting “grant funding for this off-ramp or this project.”‘

In a brief morning address to television cameras, Pelosi said Trump “abused his power for his own personal, political benefit at the expense of our national security.” She cited Trump’s pressuring Ukraine to seek dirt on his Democratic political rivals while he withheld military aid and a White House meeting sought by that country’s new president.

In a later news conference, Pelosi said a whisteblower’s late summer revelation of a threatening phone call Trump made to the Ukrainian leader was “the aha moment for the country.” Until then, special counsel Robert Mueller’s revelations about Russia’s attempts to help Trump win the 2016 election had left Democrats divided but ultimately deciding against using those findings to seek impeachment.

‘There is an urgency with Ukraine,” said Rep. Veronica Escobar. ‘‘We have elections coming up just next year.”

Even so, Escobar said some of her fellow freshmen from Trump-won districts were worried that Democrats’ impeachment articles would be too broad and include Mueller’s Russia findings, alienating some voters. Other Democrats from deeply blue areas were concerned about a “missed opportunity” by keeping the allegations too narrow, angering liberal constituents.

Another worry, according to freshman Rep. Debbie Mucarsel-Powell, D-Fla., is that voters “haven’t really paid attention to all of the work” Democrats have done on bills addressing health care and other concerns because of “the loud microphone that the president has.”

Still, she said, “We have to move ahead.”

Of Founders and Findings: What to Watch on Impeachment