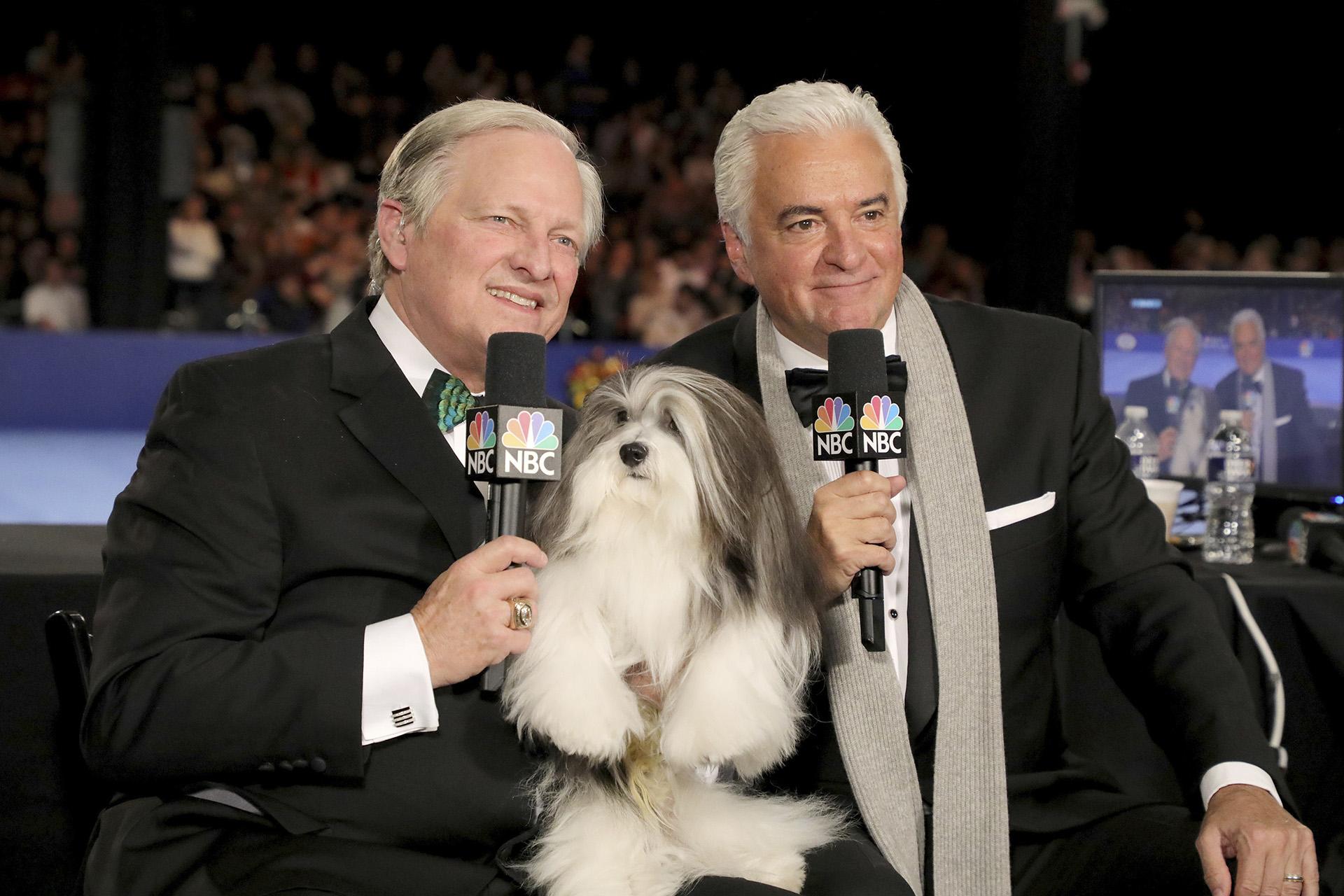 This image released by NBC shows David Frei, left, and host John O'Hurley posing with a havanese dog at The National Dog Show in Philadelphia. The annual parade of pooches has become one of the highest-rated shows of Thanksgiving. (Bill McCay / NBC via AP)

NEW YORK (AP) — Television traditions on Thanksgiving have usually involved the Macy’s Thanksgiving Day parade and then hours of football, but in recent years, another has emerged: The National Dog Show.

Hosted by actor John O’Hurley, the annual parade of pooches has become one of the most popular shows of Thanksgiving week.

But according to O’Hurley, it almost didn’t make its way to the small screen.

As O’Hurley tells it, the then-head of NBC Sports was enamored with the dog show parody classic “Best in Show” and came up with the idea to do a real show to fill the gap between the parade and football.

“They have all laughed him out of the office. But by the end of the day, he had the National Dog Show license from the Kennel Club of Philadelphia, Purina had come on as a presenting sponsor,” O’ Hurley recalled. “He called me and I was in L.A. I picked up the phone and I said, ‘Hello.’ And he said, ‘Woof, Woof.’ And that’s how it all started 18 years ago.”

For O’Hurley, best known for his time on “Seinfeld,” it was a natural fit.

“Well, I’ve had a dog ever since I was 4 years old in my lap,” said O’Hurley, as he sat next to Dyson, a Shetland sheepdog on the cusp of two who is training to be a therapy dog. “I always said I’m a better person with a dog in my lap; dogs have a tendency to round out the edges in our lives.”

O’Hurley is joined by Johnny Weir and Tara Lipinski, the figure skating commentary duo known for their dose of camp, and sports commentator Mary Carillo. David Frei, who is a licensed judge for the American Kennel Club, serves as the analyst.

“(There’s) enough money that the team has grown. Well, you know, we want to create more of an entertainment spectacle around a dog show. It’s not just (the) Westminster (Kennel Club Dog Show), which is very kind of sober. And, you know, it’s a very we want to create the feeling of, ‘It’s fun.’ And dogs are fun. They round out the edges in our lives and they’re the greatest companions we have.”

To give it more of a sports feel, handlers are sometimes mic’d, like pro sport players and coaches, so viewers can hear what’s going on on the floor and behind the stage.

“It’s so much fun what’s going on, how they’re actually talking to the dog backstage and the things that they’re saying because the communication between the handler and the dog is irreplaceable,” he said. “I mean, ultimately, the handler must look invisible.”

There are also kid handlers, which O’Hurley says shows that dog competitions are “truly a family sport. And it’s a wonderful way of growing up in the world of a sense of discipline, of a sense of presentation, a sense of confidence. It does so many wonderful things for young people that we love to see young people come into this entire world of dog shows.”

The two-hour show, which is pre-taped in the Philadelphia area, will air Thursday from noon to 2 p.m. Eastern. It inevitably draws comparisons to that other dog show — the venerable Westminster Kennel Club Dog Show, held each February. O’Hurley stressed that they are “two completely different shows and two very prestigious titles.”

He added: “We’re very proud of what we’ve achieved in such a short amount of time. We haven’t had the history of Westminster, but we certainly are, without a doubt times 100, the most watched dog show in the world.”