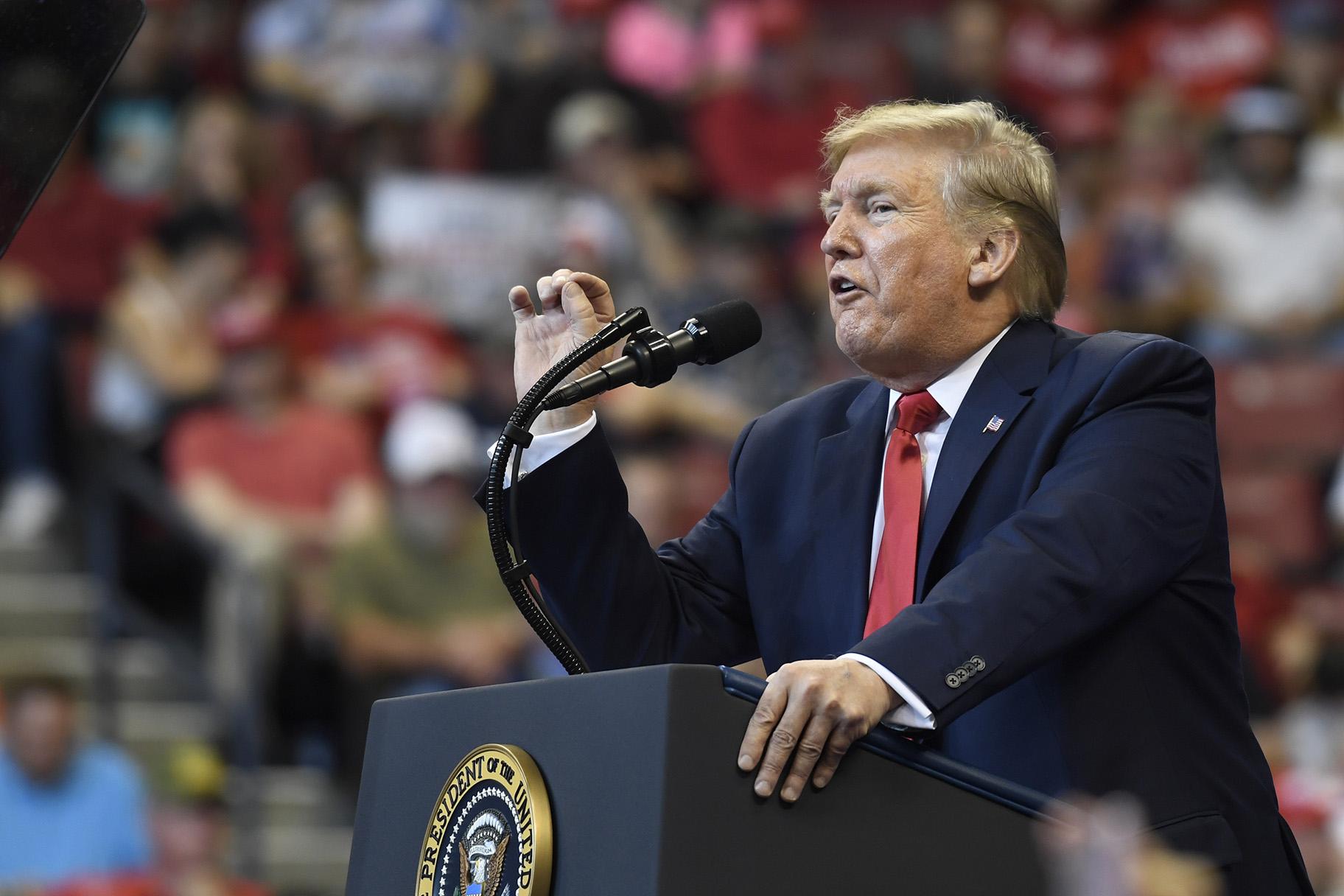 WASHINGTON (AP) — President Donald Trump was briefed on the whistleblower complaint about his dealings with Ukraine before the White House released nearly $400 million in military aid to Kyiv, officials say, shedding new light on events that triggered the impeachment inquiry.

Trump was told about the complaint in late August in a briefing by White House Counsel Pat Cipollone and John Eisenberg, an attorney with the White House National Security Council, according to two officials not authorized to publicly discuss the matter.

The lawyers told the president about the complaint, explaining that they were trying to determine whether they were legally required to give it to Congress, the officials said. The aid was released on Sept. 11 amid growing pressure from lawmakers.

The White House did not immediately respond to a request for comment.

The White House has claimed there was no link between the military aid suspension and the president’s request for Ukraine to investigate his political rival Joe Biden and his family.

But it was his request to Ukraine’s president in a July phone call that prompted the government whistleblower’s complaint about a link. The assertion of such a link has since been corroborated by a parade of witnessed testifying on Capitol Hill.

The August briefing with Trump was first reported by The New York Times.

The revelation comes just days before the House Judiciary Committee takes over the impeachment probe, scheduling a hearing for next week as it pushes closer to a possible vote on charges of “high crimes and misdemeanors.”

The Judiciary panel scheduled the hearing as the Intelligence Committee on Tuesday released two last transcripts from its depositions, including from a White House budget official who detailed concerns among colleagues as Trump ordered them, through intermediaries, to put a hold on military aid to Ukraine.

Trump and his lawyers have been invited to attend the hearing and make a request to question witnesses, according to Democratic rules approved by the House last month. The committee released a letter from committee Chairman Jerrold Nadler, D-N.Y., to the Republican president, saying he hopes Trump will participate, “consistent with the rules of decorum and with the solemn nature of the work before us.”

The White House said Wednesday no decision had been made whether to send a representative.

“But what is obvious to every American is that this letter comes at the end of an illegitimate sham partisan process,” press secretary Stephanie Grisham said.

Trump tweeted an image of his head superimposed on the muscular body of a champion boxer. He regularly tells his supporters at campaign rallies and in videos that Democrats are “trying to stop me because I’m fighting for you and I’ll never let that happen.”

Multiple government witnesses testified in impeachment hearings held by the Intelligence panel this month that Trump directed his personal lawyer Rudy Giuliani to take the lead on Ukraine policy and that Giuliani pushed an “irregular” diplomatic channel.

The Intelligence Committee is wrapping up its investigative phase of the probe and preparing its report for the next. Committee Chairman Adam Schiff has said the report could be released soon after the House returns from its Thanksgiving break.

The initial Judiciary hearing on Dec. 4, the day after lawmakers return, will feature legal experts who will examine questions of constitutional grounds as the panel decides whether to write articles of impeachment against Trump.

Democrats are aiming for a final House vote by Christmas, which would set the stage for a likely Senate trial in January.

Trump, meanwhile, tried to put distance between himself and Giuliani in a radio interview Tuesday. Asked by host Bill O’Reilly what Giuliani was doing on his behalf in Ukraine, Trump said, “I don’t even know,” adding that Giuliani had other clients as well.

Asked directly if he had directed Giuliani to go to Ukraine on his behalf, Trump said, “No.” Giuliani did not respond to requests for comment on Wednesday.

In a phone call to Ukrainian President Volodymyr Zelenskiy on July 25, Trump said several times he would have Giuliani contact Zelenskiy. “Rudy very much knows what’s happening and he is a very capable guy,” Trump said to Zelenskiy, according to a rough transcript released under pressure by the White House.

It’s unlikely that the president himself would attend next month’s hearings, as Trump is scheduled to be in England on Dec. 4 for a summit with NATO allies — a split screen showing leadership that Trump’s allies might find favorable.

If Democrats stay on schedule, the committee will introduce articles of impeachment, debate them and then hold a vote, a process that could take several days. If charges are approved by the end of the second week of December, the House could hold a formal impeachment vote the third week of the month just before leaving for the holidays.

The charges are expected to mostly focus on Ukraine. Democrats are considering an overall “abuse of power” article against Trump, which could be broken into categories such as bribery or extortion. That article would center on the Democrats’ assertion, based on witness testimony, that Trump used his office to pressure Ukraine into politically motivated investigations.

Democrats also are expected to include an article on obstruction of Congress that outlines Trump’s instructions to officials in his administration to defy subpoenas for documents and testimony.

Lastly, Democrats could include an obstruction of justice article based on special counsel Robert Mueller’s report released earlier this year.

When and if the House approves articles of impeachment, the Republican-controlled Senate would be expected to hold a trial in early 2020. Unless political dynamics change drastically, Trump would have the backing of majority Republicans in that chamber and be acquitted.

In a transcript of closed-door testimony released Tuesday, Office of Management and Budget official Mark Sandy, a career employee, told lawmakers that his office was notified as early as July 12 by the White House chief of staff’s office that Trump was withholding the military aid. That was two weeks before Trump asked Ukrainian President Zelenskiy to investigate Democrats.

Sandy testified that Trump himself requested additional information about the aid on July 19 after seeing an unidentified “media report.” The office then started the official process of withholding the money on July 25, the day of the call between Trump and Zelenskiy, Sandy said.

He also testified that he knew of two people who left the agency who had voiced concerns over the handling of the Ukraine aid.