Women Forced to Choose Between Food and Menstrual Products

Chicago native Faustina Beninato is faced with a terrible choice every month: whether to spend her limited income on food or menstrual hygiene products. Temporarily homeless, she roams malls and the Harold Washington Library during the day – where she devotes two hours to job searching – and rides CTA trains at night to avoid the cold.

Beninato is not alone. She is one of millions of people of all age groups who struggle to afford period products. A recent study found that 1 in 5 girls in the U.S., including thousands of Chicago Public Schools students, have either missed school or left early because they did not have access to a tampon or sanitary pad.

“Some may have to choose between food and prescription drugs,” Beninato said. “Some, the pads or food. So, which is it today? If I’m very short on money, what should it be? Food? Lunch? Or get the pad?”

“Period poverty” refers to people who need feminine hygiene products but cannot afford them. They often resort to using toilet paper or rags, or not using anything at all. 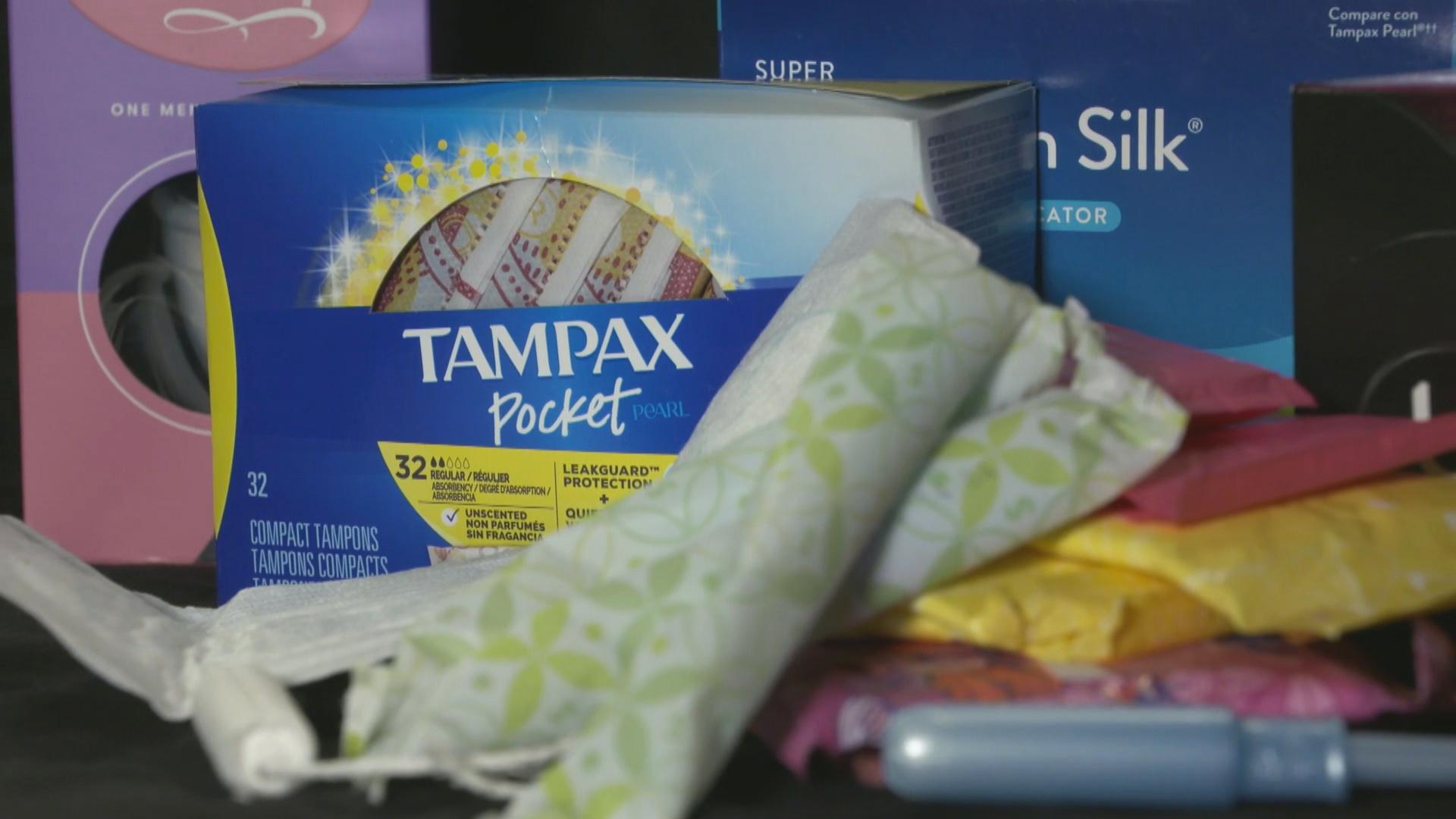 At Fourth Presbyterian Church on the Magnificent Mile, Beninato finds some solace. The church partners with Chicago Lights and The Period Collective, local organizations that work to provide pads and tampons to people who cannot afford them.

Evorn Harness started coming to Chicago Lights for period products after losing her job and developing fibroids, uterine growths that can cause stomach pain and heavy menstrual bleeding. Her health made it difficult for her to go on job interviews and her lack of income, in turn, lessened her ability to buy hygiene products.

“So, it’s, like, hard trying to find different pads and things, to be able to cope, not have … embarrassing moments to go out or work or anything like that,” Harness said.

When Ida Melbye, The Period Collective’s founder, learned about period poverty in 2016, she created the organization to focus on the human rights issue, which is often neglected because of the stigma and shame attributed to periods in general.

“There’s a sense of dignity that’s lost,” Melbye said. “And when girls can’t go to school, or a woman can’t go to a job interview or they have to miss work because they don’t have the product that they need, the cycle of poverty continues.”

She packs her SUV with boxes and bags of tampons, pads and other products to deliver to people who, without access to donations, would have to improvise.

Less hygienic methods to handle menstruation can have negative health effects, according to Anne Sebert Kuhlmann, an associate professor of behavioral sciences and health education at St. Louis University who conducted the largest study to date on the consequences of menstrual inequity.

Melbye is trying to change that, one tampon at a time. Her organization works with 32 social service agencies, from transitional housing facilities to food banks, and has donated 170,000 products.

“Unfortunately, it’s a huge issue and we’re trying to make a dent in it,” Melbye said.

Other women and men hoping to shine a light on the access, or the lack thereof, of period products gathered in Chicago’s Federal Plaza for National Period Day on Oct. 19. This rally – one of 55 held across the country – was organized by Mary Catherine Hanafee LaPlante, a junior at Mount Prospect High School.

“We go to a fairly wealthy, affluent public high school and so you would think that we would have these products readily available, but I can’t count the number of times that I’ve gone to the bathroom and they just aren’t there,” Hanafee LaPlante said.

Since 2018, Illinois requires feminine hygiene products to be available for free in bathrooms in public schools. However, two recent studies illustrate the problem. According to Harris Insights and Analytics, 25% of teenage girls in the U.S. miss class due to lack of tampons or pads; and the hygiene company Always calculated that 65,000 girls in Chicago have missed classes because they cannot afford period products.

The rally’s organizers from different Chicagoland high schools shook their heads “no” when asked if menstrual products could be found in their schools’ bathrooms.

Melbye points out that students who miss school might be concerned about the stigma surrounding menstruation and period poverty.

“Unfortunately, a lot of kids miss school when they’re on their periods because if you worry about bleeding through your clothes, you really can’t focus on what’s going on in school,” she said.

Feminine hygiene products are taxed in a majority of states across the U.S. Until recently in Illinois, they were taxed at the same rate as general merchandise, including computers, boats and iPhones. State Sen. Melinda Bush sponsored the legislation that removed the state sales tax on period products.

The state loses an estimated $10 to $15 million a year in revenue, but Bush argues the cost is worth it.

“Anyone that’s had a period knows it’s not a luxury, and certainly to see a tax at that upper rate seemed ridiculous,” Bush said.

The vote was unanimous, even though Bush said some of her male colleagues were uncomfortable at first.

“But what they said back is, ‘Yeah, you know, I have daughters. I have a wife. Never really realized that we were paying those kinds of taxes.’”

It might be long until the stigma surrounding periods is gone, but thanks to organizations like The Period Collective and rallies like National Period Day, those who are most affected by period poverty don’t have to look far for support. As attention around the topic continues to grow, Beninato and Harness hope more people come to understand the dilemma they face each month.

“Yes, it’s a cushion to fall on when you have nowhere to fall,” Beninato said.

Melbye’s group is just one of several working to help women who can’t afford hygiene products.  Currently, 33 states tax feminine hygiene products. But according to the New York Times, 22 states are attempting to repeal them as Illinois has.

Not everyone supports such tax cuts.

In a New York Times article published this summer, policy analyst Katherine E. Loughead of the Tax Foundation, said: “Every time another exemption is passed, it means the tax rate that applies to everything else will have to increase in order to generate that same amount of revenue.”

When voters in Nevada were asked in 2018 whether they wanted to remove the sales tax on feminine hygiene products, the National Taxpayers Union cautioned: “While it is good that some consumers may benefit from this measure, taxpayers should be concerned about another carve out in the tax code. As the state continues to exempt certain items and thereby reducing the amount of items subject to the sales tax, it will require the state to increase the sales tax rate to generate the same amount of revenue to offset the drop in revenue.”

Voters ended up approving the measure.

Note: An earlier version of this story misstated the academic title of Anne Sebert Kuhlmann. The story has been corrected.