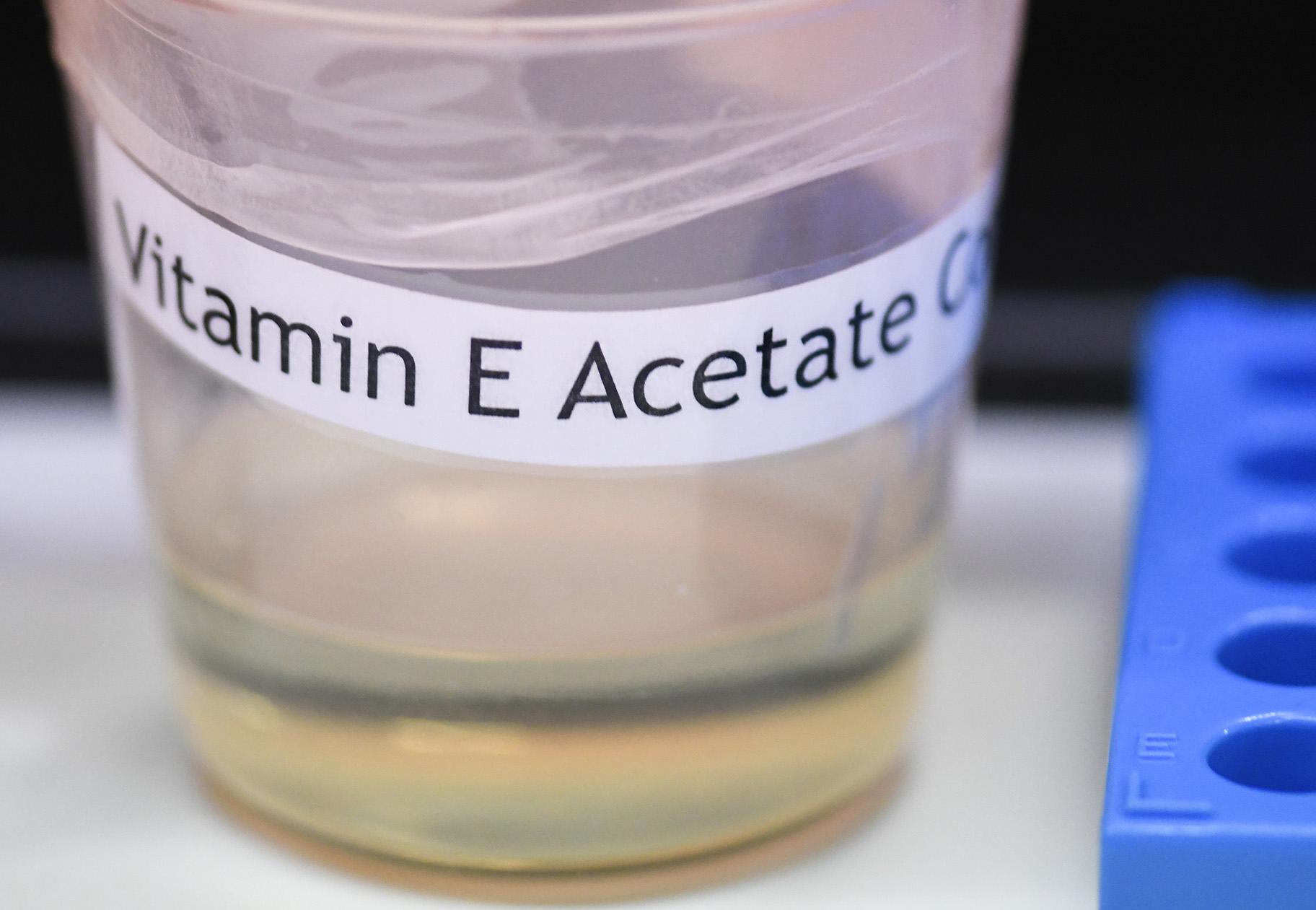 This Monday, Nov. 4, 2019 photo shows a vitamin E acetate sample during a tour of the Medical Marijuana Laboratory of Organic and Analytical Chemistry at the Wadsworth Center in Albany, N.Y. (AP Photo / Hans Pennink)

NEW YORK (AP) — U.S. health officials announced a breakthrough Friday into the cause of a mysterious outbreak of vaping illnesses, reporting they have a “very strong culprit.”

The same chemical compound was found in fluid taken from the lungs of 29 patients across the country, the Centers for Disease Control and Prevention said. The compound — vitamin E acetate — was previously found in liquid from electronic cigarettes and other vaping devices used by many of those who got sick.

But this is the first time they’ve found a common suspect in the damaged lungs of patients, officials said.

“We are in a better place in terms of having one very strong culprit,” said the CDC’s Dr. Anne Schuchat.

Agency officials cautioned they cannot rule out all other toxic substances, and it may take animal studies to clearly show vitamin E acetate causes the lung damage that’s been seen.

More than 2,000 Americans who vape have gotten sick since March, many of them teen and young adults, and at least 40 people have died. The bulk of the cases occurred in August and September but new cases are still being reported.

Vitamin E acetate has only recently been used as a thickener in vaping fluid, particularly in black market vape cartridges. While vitamin E is safe as a vitamin pill or to use on the skin, inhaling oily droplets of it can be harmful. It’s sticky and stays in the lungs — the CDC’s Dr. Jim Pirkle likened it to honey.

Many who got sick said they had vaped liquids that contain THC, the high-inducing part of marijuana, with many saying they got them from friends or bought them on the black market.

E-cigarettes and other vaping devices heat a liquid into an inhalable vapor. Most products contained nicotine, but THC vaping has been growing more common.

Pirkle said thickeners like vitamin E acetate probably would not be routinely added to nicotine liquids, which need to be more watery for vaping.

Juul Labs, maker of the top-selling brand of e-cigarette, issued a statement after the CDC announcement, noting that its nicotine products do not contain THC or any vitamin E compounds.

About two months ago, New York drew attention to vitamin E acetate when the state’s public health lab discovered it in samples of vaping products from sick patients. In some instances, it made up more than half of the liquid in the cartridges.

The chemical has shown up in tests in other labs, too, including a U.S. Food and Drug Administration lab in Cincinnati that found vitamin E acetate in half of the more than 400 THC samples.

For the latest test, the CDC used fluid extracted from the lungs of 29 patients in 10 states, including two who died. Lab workers looked for a range of substances that had been found in various vaping devices, including nicotine, THC and other marijuana components, plant oils, mineral oil and cutting agents used on the black market.

It was an exhaustive list of more than 1,000, said Pirkle, who oversees agency’s chemical analysis labs.

The one substance that came up in all 29 was vitamin E acetate.

“To me what’s important here is both what they found, and what they didn’t find” said Scott Becker, head of the Association of Public Health Laboratories. “This was the only thing they found.”

Portland State University’s Robert Strongin, who’s researched e-cigarettes, welcomed the CDC report but cautioned it doesn’t mean other ingredients in vaping products are safe. “They still could cause long-term harm,” he said.

The CDC’s Pirkle said animal testing is now a priority and might produce results within a year.

“We really need the animal study to nail down cause and effect,” he said.