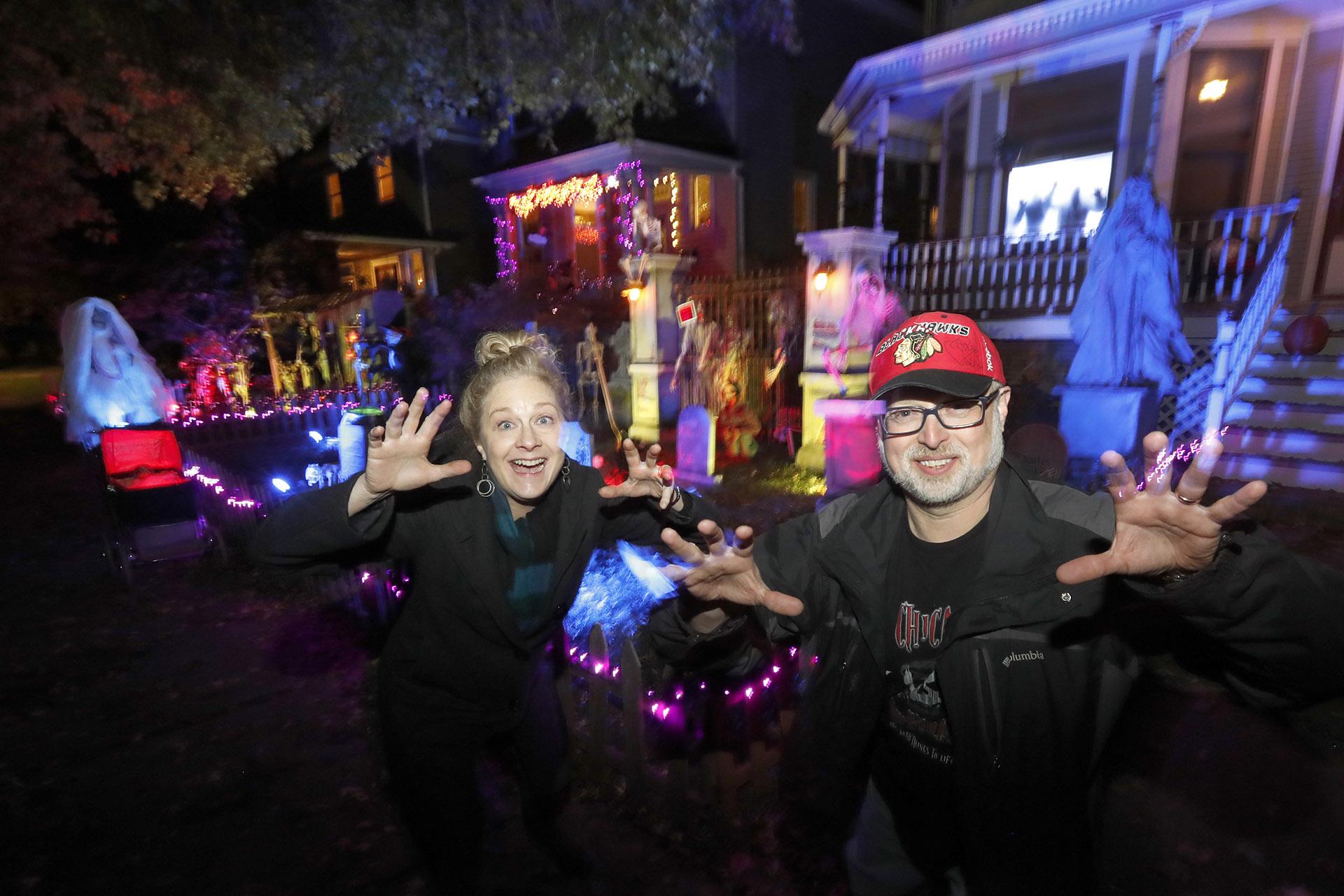 In this Tuesday, Oct. 29, 2019 photo, neighbors Beth LeFauve, left, and Nelson Gonzalez pose for a portrait outside their two Bernard Street homes and the Halloween decorations spanning both properties in Chicago. (AP Photo / Charles Rex Arbogast)

CHICAGO (AP) — The good news for kids this Halloween: They’ll likely come home with a bigger pile of candy than of healthy snacks while out trick-or-treating.

Americans have a wide variety of plans to celebrate the spooky holiday this year, from carving pumpkins to watching scary movies. Some even plan to make their dogs and cats suffer the fate of being forced into goblin or Spiderman outfits.

Those are just some of the findings of a poll conducted ahead of Halloween by The Associated Press-NORC Center for Public Affairs Research.

“There’s all these kidnappings and stuff going on,” said Lamar Walker, of Huntsville, Alabama, in explaining why this year he is taking his sons, 12 and 6, to a party at a church.

Such worries help explain why an army of children descend on one street on Chicago’s North Side every Halloween, not leaving until each house is some 2,000 pieces of candy lighter. Part of the attraction may be the elaborate displays, including zombies programmed to shake fences and push baby carriages down the street and skeletons digging graves. But homeowners know that parents, some of whom drive from across the city, are after something else: safety.

“It’s all contained and safe, and kids don’t have to go into apartment buildings where it gets creepy, (and) they don’t have to go down main streets,” said Nelson Gonzalez, an electric engineer who is responsible for a lot of the electronics that make the displays shake, roll, scream and smoke.

While pretty much every house on Bernard Street is good for a treat, the poll shows what every kid knows: not everyone gives out candy. In all, about 4 in 10 say they plan to do so.

Many Americans, including most people with kids under 13 at home, say they do plan to dress their kids up and take them out trick-or-treating. About a quarter of adults, and a third of those with younger children, will get into costume themselves.

But the poll also indicates that by 60 years old, fewer want to spend the evening dressed like Dracula, or to spend Nov. 1 yanking out the tombstones planted in their lawns.

“I’ve always thought that was kind of foolish,” said 76-year-old Earl Thompson, a retired northern Illinois truck driver who counts himself among the vast majority of Americans age 60 and over who have no plans to don a costume.

By comparison, close to half of adults under age 30 do plan to dress up. Younger Americans are also far more likely than older ones to have plans to decorate for the holiday, 46% to 28%.

But as long as his wife has her way, Thompson can’t join the ranks of those who have stopped putting up decorations.

“She decorates every year and as soon as Halloween is done, the Thanksgiving stuff goes up,” he said.

Thompson is equally adamant that he won’t be among the 7% who hand out healthy snacks instead of candy this year.

“We are a good house because we pass out the bad stuff,” he said.

Peyton Helmer also is a firm “no” when it comes to the question of healthy snacks.

“This is the one day a year for candy,” said Helmer, a farmer in St. Landry, Louisiana. “We are not going to give out healthy snacks.”

Pets weren’t asked about their feelings about Halloween, but 11% of Americans do say they plan to dress up their cat or dog.

For those facing the choice of whether to dress their critters up, a common refrain is that the decision belongs to the pets themselves.

Thompson joked his dogs would try to bite him if he ever came at them with a costume. But it’s a split decision at Lamar Walker’s house. “Cucumber likes it,” he said of the dog’s bat outfit. But, the other one, China? “She don’t like it (and) she’ll just sit in one spot and pee on the floor.”

In Spearfish, South Dakota, Cheryl Anagnapoulos would be happy to let her Miniature Pinscher, Oliver, decide, as soon as he starts paying rent.

“He fights pretty hard,” she said of when it comes time to put on his sweater with the skeleton face on it. “But we feed and house him so this is the least he can do.”

The AP-NORC poll of 1,075 adults was conducted Oct. 24-28 using a sample drawn from NORC’s probability-based AmeriSpeak Panel, which is designed to be representative of the U.S. population. The margin of sampling error for all respondents is plus or minus 4.1 percentage points. Respondents were first selected randomly using address-based sampling methods and later were interviewed online or by phone. 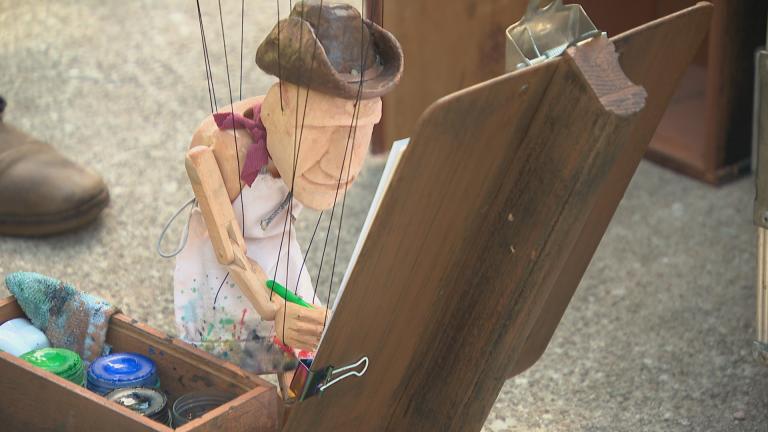 Chicago Puppeteer Brings Theater To Your Door with Pop-Up Show 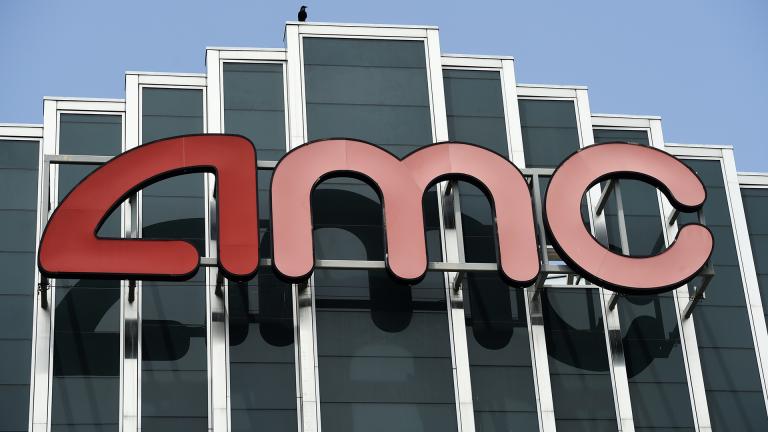