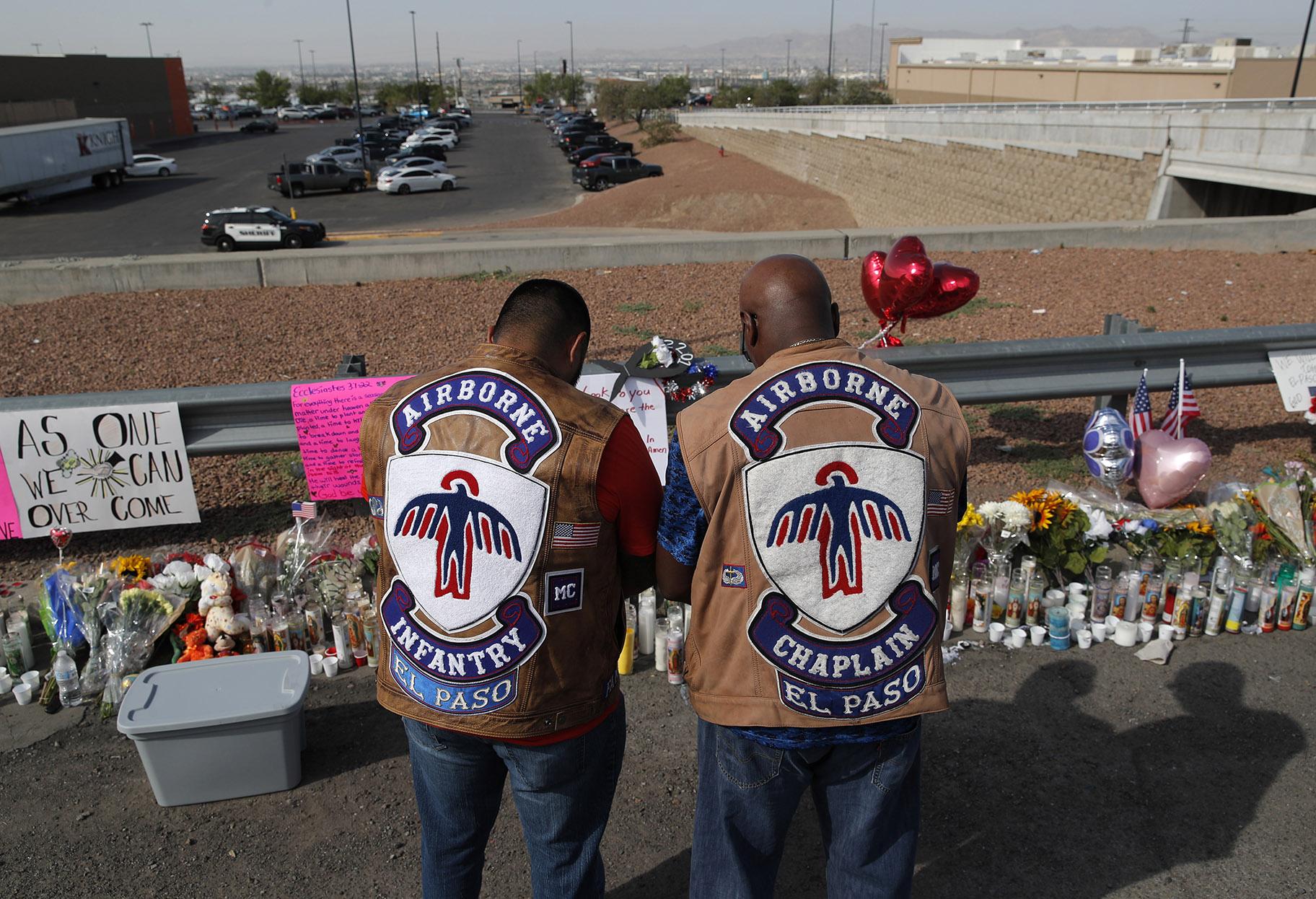 People pray at a makeshift memorial Monday, Aug. 5, 2019 for victims of a mass shooting at a shopping complex in El Paso, Texas. (AP Photo / John Locher)

Latinx community leaders in Chicago are telling President Donald Trump his words matter, days after a gunman targeted and killed more than 20 people, including many Hispanics, inside a Walmart store in El Paso, Texas.

Members of the Latino Policy Forum, a Chicago advocacy organization, called on elected officials in Illinois and across the country to confront gun violence “through legislation and leadership,” while putting an end to hateful rhetoric directed at immigrants.

“The motives behind the El Paso massacre were clearly directed at Latinos, and they were rooted in the damaging rhetoric that came into the national spotlight when Donald Trump began using words like ‘invasion’ and ‘drug dealers and rapists’ to describe immigrants crossing the southern border,” they wrote in a statement Monday.

“The Latino Policy Forum joins other Latino leaders in Illinois and nationwide in holding our political leaders accountable for using divisive rhetoric. WORDS MATTER! We reject public language that inspires racist acts of barbarism, such as we saw in El Paso.”

That sentiment was shared by 12th Ward Ald. George Cardenas, who sent a tweet to the president Monday morning telling him “Word do matter! This is on you!”

Two more people who were shot in the Saturday attack died Monday, bringing the death toll to 22. On Sunday, nine people were killed in an unrelated mass shooting in Dayton, Ohio.

Investigators are focusing on whether the El Paso attack was a hate crime after the emergence of an anti-immigrant screed the 21-year-old gunman allegedly posted online shortly beforehand, which warned of a “Hispanic invasion” in the U.S.

Hate-crime charges could carry the death penalty. The suspect has been booked on state capital murder charges, which also carry a possible death penalty.

“I am heartbroken for El Paso and the victims of today’s horrific mass shooting,” Mexican-born U.S. Rep. Jesus “Chuy” Garcia (D-Illinois) wrote in a tweet Saturday to U.S. Rep. Veronica Escobar (D-Texas). “My thoughts are with @RepEscobar. Too many lives and communities are torn apart by senseless gun violence. We must act NOW to end the gun violence epidemic and stand against white nationalism.”

I am heartbroken for El Paso and the victims of today’s horrific mass shooting. My thoughts are with @RepEscobar. Too many lives and communities are torn apart by senseless gun violence. We must act NOW to end the gun violence epidemic and stand against white nationalism. https://t.co/Gw9zoUPa43

The shootings in Texas and Ohio were the 21st and 22nd mass killings of 2019 in the U.S., according to the AP/USA Today/Northeastern University mass murder database that tracks homicides in which four or more people killed – not including the offender.

Including the two latest attacks, 127 people have been killed in mass shootings in the country so far this year.

Trump on Monday condemned weekend shootings in Texas and Ohio as barbaric crimes “against all humanity” and called for bipartisan cooperation to respond to an epidemic of gun violence, blaming mental illness and video games but made no mention of more limits on sales of firearms.

But those with the Latino Policy Forum say the president must do more.

“We reject public language that inspires racist acts of barbarism, such as we saw in El Paso,” they said. “It is time domestic terrorism is given the same attention as international terrorism.”