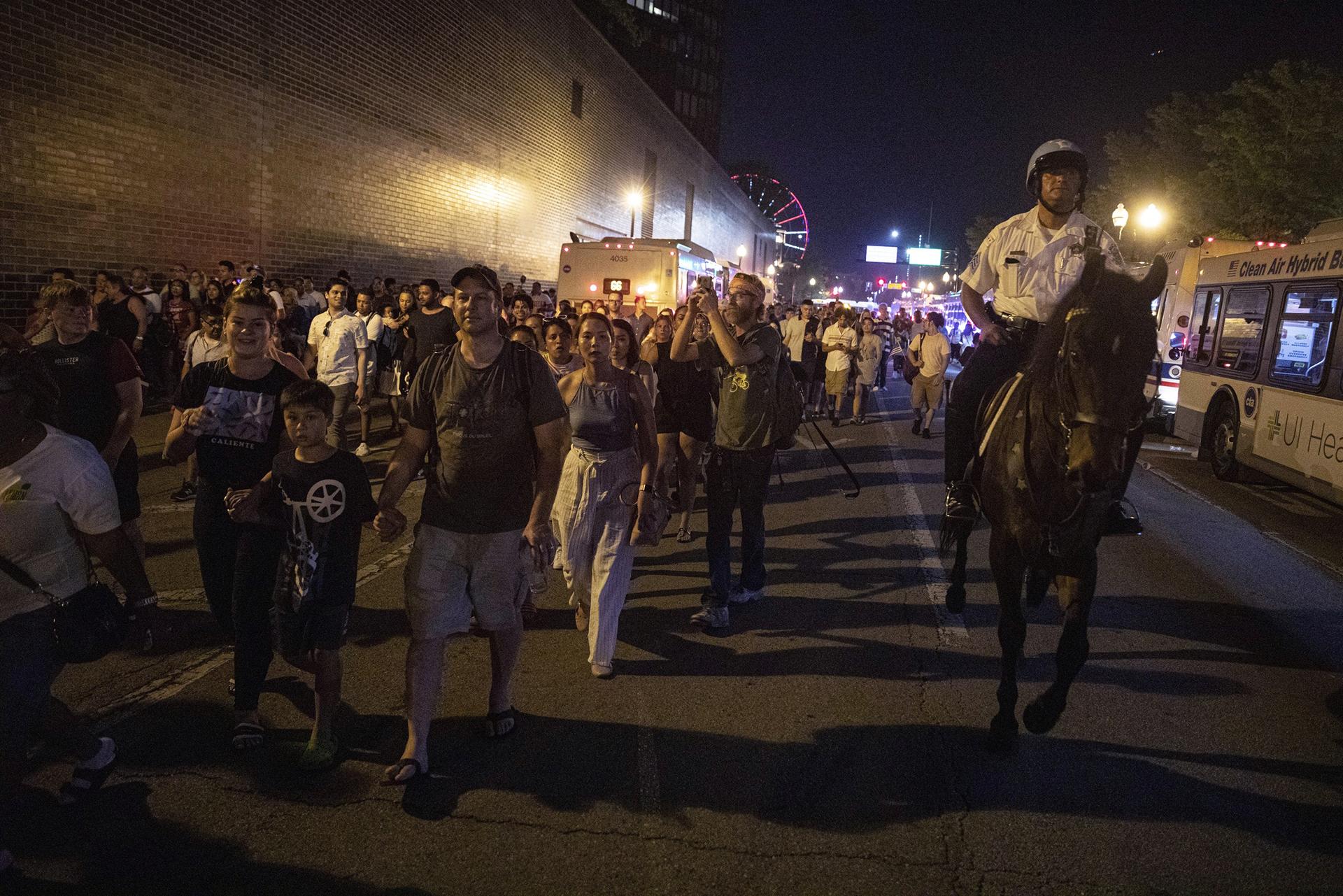 In this Thursday, July 4, 2019 photo, A Chicago Police Department officer guards people as they stream out of Chicago’s Navy Pier after reports of stabbings and threatening injuries after the 4th of July celebrations. (AP Photo / Amr Alfiky)

CHICAGO (AP) — Police said a false report of gunfire set off a stampede that trampled more than a dozen people at Chicago’s annual July 4 fireworks display Thursday at Navy Pier, where thousands of revelers had crowded the Lake Michigan shore.

Three others were stabbed when a fight broke out after a group of young males flashed gang signs, authorities said. Three people suffered non-life-threatening injuries.

The Navy Pier incidents occurred just after 10 p.m. on what is one of the bigger events of the year at the lakeside showplace. The stabbing occurred among groups of males, Bartoli said.

A 30-year-old man not involved in the altercation suffered stab wounds to the face and arm but said he did not see the offender nor did he remember any details about the incident, Bartoli said. He was at Northwestern University Hospital in stable condition.

Also, a 16-year-old boy, initially thought to have been stabbed, actually sustained a puncture wound to his leg after running into a table.

Police officers believe that after that altercation, someone threw firecrackers at the pier, prompting shouts of "gun" or "shots fired," and spurring a "stampede" that injured "approximately 13" people, Bartoli said. The initial reports of gunfire were inaccurate, police said.

Those who were injured while running or falling in the melee were taken to hospitals with non-life-threatening injuries, said another police spokesman, Rocco Alioto.

Rachel Schar, who’s a server at the waterfront restaurant Harry Caray’s Tavern, said that during ensuing panic crowds of visitors swarmed the restaurant for at least 10 minutes to escape what they believed was an active shooter at the pier.

“It was pure chaos,” the 22-year-old told the Chicago Tribune. “I literally thought I was going to die.”

Schar said she was collecting credit cards from a party table when she heard screaming, shoes rapidly pounding the pavement and shouts about a gun and people stabbed outside. She said she was tackled during that pandemonium and then sprinted upstairs into an office.

Elsewhere in the city, the typically violent 4th of July holiday had already seen 35 people shot in Chicago, five fatally, with three days to go in the weekend. Mayor Lori Lightfoot, who took office in May and has made curbing gun violence a priority, followed recent years’ practice by pouring an extra 1,500 police officers onto the streets. Messages left with her press office Friday were not immediately returned.