Video: Boeing is back on the congressional hot seat over the 737 max jet, but could its fortunes soon be on the rise? Joining us with the latest is Chicago-based NPR transportation correspondent David Schaper.

Airline union leaders and a famed former pilot said Wednesday that Boeing made mistakes while developing the 737 Max, and the biggest was not telling anybody about new flight-control software so pilots could train for it.

Chesley “Sully” Sullenberger, who landed a crippled airliner safely on the Hudson River in 2009, said he doubted that any U.S. pilots practiced handling a specific malfunction until it happened on two Max jets that crashed, killing 346 people. Max pilots should train for such emergencies in simulators — not just on computers, as Boeing proposes, he said.

“We should all want pilots to experience these challenging situations for the first time in a simulator, not in flight, with passengers and crew on board,” Sullenberger said, adding that “reading about it on an iPad is not even close to sufficient.”

Sullenberger’s comments to the House aviation subcommittee came during the third congressional hearing on Boeing’s troubled plane, which has been grounded for three months.

Daniel Carey, the president of the pilots’ union at American Airlines, said Boeing’s zeal to minimize pilot-training costs for airlines buying the 737 Max jet contributed to design errors and inadequate training. That has left a “crisis of trust” around aviation safety, he said.

Former Federal Aviation Administration chief Randy Babbitt said his old agency too readily accepted Boeing’s design changes on the Max, and pilots should have been better trained. Sara Nelson, president of the largest flight attendants’ union, joined in hammering Boeing and the FAA, although she acknowledged she has recently noticed “a chastened tone” from the company. 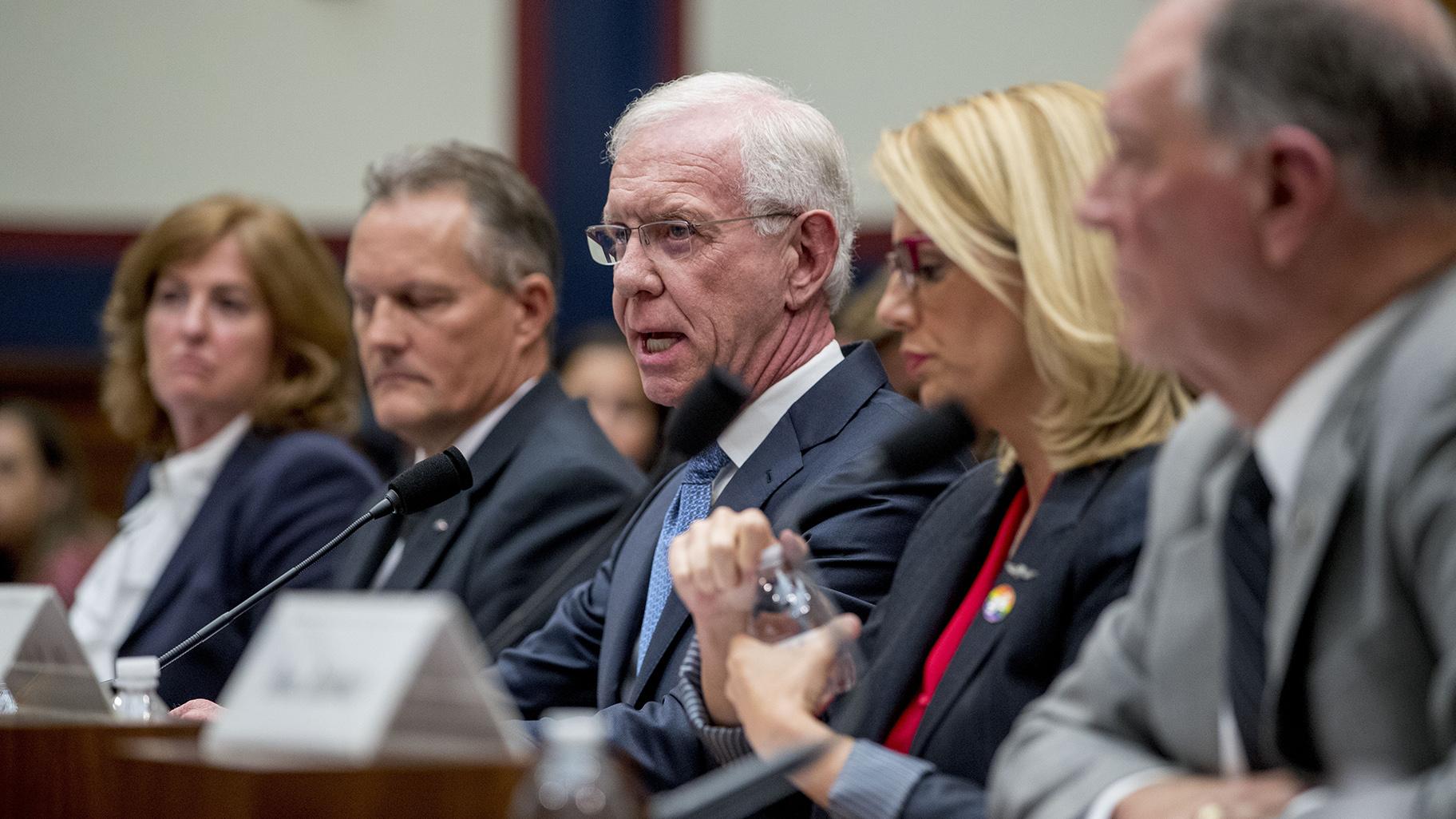 Captain Chesley “Sully” Sullenberger, accompanied by, from left, Sharon Pinkerton with Airlines for America, Captain Dan Carey with the Allied Pilots Association, Sara Nelson with the Association of Flight Attendants-CWA, and former Federal Aviation Administration Administrator Randy Babbitt, speaks during a House Committee on Transportation and Infrastructure hearing on the status of the Boeing 737 MAX on Capitol Hill in Washington, Wednesday, June 19, 2019. (AP Photo / Andrew Harnik)

As the hearing unfolded in Washington, the head of the pilots’ union at Southwest Airlines in Dallas said his group will seek compensation from Boeing for lost flying assignments and the costs of complying with a Justice Department subpoena for its records, which are part of the government’s criminal investigation into Boeing.

All of the comments underscore the challenges Boeing faces convincing pilots they can be confident the Max can be made safe. Those pilots, in turn, are key to convincing reluctant passengers to fly on the plane.

“That bond between the passenger and the pilot is one that is critical,” Boeing CEO Dennis Muilenburg said during an investor presentation in April.

Pilots complain that Boeing did not tell them about flight software called MCAS until after the October crash of a Lion Air jet in Indonesia. That same software, which could misfire on the failure of a single sensor, was implicated in a second crash five months later of an Ethiopian Airlines jet.

The MCAS software was designed to make the Max feel like previous 737 models to pilots despite engines that were larger and placed more forward on the wings and changed the plane’s aerodynamics.

“This was a fatal design flaw built into the aircraft at the factory,” Carey said in an interview before the hearing.

After the Lion Air crash, Boeing sent pilots and airlines a checklist of steps to take if MCAS malfunctioned, including disabling the software and hand-cranking a wheel to manually rotate part of the plane’s tail and point the nose up. The Ethiopian Airlines pilots tried that, but they couldn’t physically move the tail part because the jet was flying too fast.

“We not only have to devise checklists, we have to make sure those checklists are able to be performed by a flight crew,” Carey told the lawmakers.

Carey said video training for pilots on the MCAS updates would be enough to get the planes back into the air, but he advocated simulator training during each pilot’s training updates.

Boeing engineers have finished making fixes to the software and expect to soon demonstrate their work to government safety officials on test flights in hopes that the FAA will certify the plane as safe.

The changes will be accompanied by additional pilot training. FAA technical experts endorsed Boeing’s conclusion that simulator time is not immediately needed for pilots who know how to fly older 737 models. Acting FAA Administrator Daniel Elwell said recently the agency has not made a final decision.

Carey and Sullenberger also questioned the FAA’s independence from Boeing and other companies it regulates. Sullenberger criticized an FAA program that relies on industry employees to perform some safety tests and inspections, and he urged lawmakers to give FAA more money so it can do the work itself.

No one from Boeing Co. testified at Wednesday’s hearing. Rep. Peter DeFazio, an Oregon Democrat and chairman of the full House Transportation Committee, said his panel has received “a substantial number” of the documents it has requested from Boeing and the FAA about development and approval of the Max, and he will summon the company to a future hearing.

In a statement, Boeing spokesman Peter Pedraza said Boeing was providing information to regulators, airlines and pilots “to re-earn their trust and know we must be more transparent going forward.”

Boeing’s path to regaining trust still looks bumpy. Jon Weaks, president of the pilots’ union at Southwest — which owns 34 Max jets, more than any other carrier, and is the world’s biggest 737 operator — faulted Boeing for many missteps during the crisis.

“Boeing seems to receive more bad news with every passing week and still needs to learn how to rebuild trust as well as the airplane,” Weaks wrote in a memo to his pilots on Wednesday.