100 Days In, Gov. Pritkzer’s Biggest Challenges Are Just Ahead

One hundred days into holding his first-ever elected office, Gov. J.B. Pritzker’s press team has a three-page list of accomplishments to show as proof that he’s off to a strong start. But it will be the next 40 days that define whether his first year – perhaps his entire term – are a success, as the Legislature decides not just the fate of Pritzker’s first budget proposal but also his attempt to overhaul how Illinois taxes its residents.

And it doesn’t appear as if there’s a “plan B” if he fails.

“With 100 days behind me I can say that we’re really excited about the direction that we’re going,” Pritzker said during a one-on-one interview with WTTW News on Monday.

Among the accomplishments on his administration’s list: Signing a state gun dealer licensing act into law; the appointment of the first-ever African American woman to lead the state’s economic development agency; and issuing a gender pay equity executive order prohibiting state agencies from asking employees about their past salaries.

But also listed are initiatives still in their infancy: His plans to increase spending on college tuition assistance for low-income students; pumping more money into early childhood programs; and expanding eligibility for poor working parents to receive state help paying for child care.

Also on the list is his “fair tax” plan to amend the state constitution so that income can be taxed at graduated rates based on wealth versus a flat rate across-the-board.

Pritkzer, a billionaire, did not offer a dollar amount when asked how much more he would pay under his plan.

“A 3-percent hike is what I would pay in state taxes,” he said.

With his “fair tax,” the governor’s full income would be taxed at 7.95% versus the current 4.95%; that does not include other elements of the still-in-flux package that Pritzker could be able to take advantage of, such as property tax relief.

According to the “fair tax” online calculator Pritzker’s administration set up so residents can “see how the Fair Tax would impact your family,” he and wife M.K. would see their state tax bill increase by roughly $1.65 million, using the roughly $55 million adjusted state income he reported on his 2017 Illinois 1040 tax form.

But that doesn’t necessarily give an accurate picture, which is difficult to ascertain from the limited information that Pritkzer has made public. He has released only partial tax returns, giving an incomplete picture of his wealth.

During his campaign for governor, Pritzker’s challengers questioned his advocating for a “fair tax” even as they charged he avoided paying taxes through storing some of his wealth in off-shore accounts.

A Chicago Tribune investigation found holdings created between 2008-11; Pritzker maintained at the time that he had no control over the accounts and that all distributions went to charity.

When asked Monday whether he’s moved any money from off-shore accounts so that it would be subject to Illinois taxation, Pritzker said, “Well, all of it is dedicated to charity. And so all of it is, in fact, being brought back on shore to charities, and as you know ... charitable contributions are tax deductible.”

It's different for Illinois’ wealthiest, Pritzker among them.

All joint filers with income over $1 million would pay the highest tax rate of 7.9% on their entire income.

“It’s about protecting the middle class … while we’re also addressing the state’s significant fiscal challenges,” Pritzker said. “I think the wealthiest people should step up to the plate and help us overcome that.”

Pritzker, who spent $171 million in the 2018 election cycle, would not say how much of his personal wealth he will spend to help convince legislators and the public that he’s right.

A group called Think Big Illinois, headed by one of Pritkzer’s former top campaign aides, previously confirmed the governor is a donor, but would not say how much he is giving toward its efforts, nor would it disclose its other contributors – if there are any.

The group, which is classified as a nonprofit and is not legally required to make its funding public but has promised to voluntarily do so in the future, is airing commercials promoting Pritzker’s so-called “fair tax” plan.

The opaque funding of dark money groups is a constant source of frustration for transparency advocates who argue it masks the motives of entities with the power to influence voters.

Thus far, Republicans have stood a united front against the change, arguing that it’s giving a “blank check” to politicians whose bad fiscal choices put Illinois’ finances in the hole.

“I’m hoping” some GOP lawmakers will vote for it, Pritkzer said. “I wish that they would all come to the table” to negotiate but “that doesn’t seem to be what they want," he said.

Opponents “should put forward a plan for how they want to overcome the challenges that the state faces because doing nothing is not an option,” Pritkzer said, adding that there is a lot of “false information” and rhetoric about what a graduated income tax would mean for Illinois families.

But Pritzker does not appear to have a contingency plan if he doesn’t get his way on his “fair tax” push.

There are more than enough Democrats in the Legislature to accomplish the first step of amending the constitution to allow for graduated tax rates: Getting approval from three-fifths of members of each chamber.

Still, that isn’t a shoe-in. Without any GOP votes, Democrats in targeted districts may be wary such a vote could sink their own political futures.

There’s no telling whether voters will.

And Pritzker doesn’t appear to have a contingency in place.

His proposed Fiscal Year 2020 budget is a “bridge,” he said, designed to carry the state from now until his graduated income tax package becomes a reality.

If it doesn’t, however, Illinois may have spent the past couple of years further pushing off difficult fiscal choices.

Some elements of the FY20 budget proposal are tied to the graduated income tax, albeit loosely. The governor has outlined a five-point plan for dealing with the state’s unfunded pension systems, which he has said should be taken as a comprehensive package. One of those points calls for contributing $200 million of revenue generated in the future by his “fair tax” and putting it toward pensions.

In the meanwhile, another of the five points calls for extending the pension payment cycle, such that the state would put at least $900 million less into the systems in the next budget year – money that Pritzker and lawmakers could instead spend on other items.

Should the graduated income tax plan fail to pass, Illinois’ pensions would be in still deeper trouble.

Even if lawmakers go along with Pritkzer’s plan to reduce the state pension payment this year, municipalities continue to struggle with meeting their pension obligations while keeping up with operating expenses.

It is a looming challenge for Chicago, especially, as the city is set to see pension obligations increase by $1 billion in coming years.

A task force formed by Pritkzer is set to come out with a report this summer on the prospect of consolidating municipal pension funds “that will help lower the costs.”

“These are comprehensive issues that have been going on for decades now. And you can’t solve them in one year,” he said of Illinois’ multitude of pension and financial issues. “But you’ve got to turn the ship in the right direction.”

As he seeks to turn that ship, Pritzker says he has regular meetings with the four legislative leaders, speaking with each – including House Speaker Michael Madigan –  “on average … at least once a week.”

“I’m very proud of the fact that I’ve reached across the aisle,” he said.

Pritkzer's "to do" list leading to that date rivals the length of his cited accomplishments – in addition to the budget and graduated income tax, he also wants legislators to legalize marijuana for recreational use, to establish a structure for legalized sports betting and to approve a massive infrastructure bill paid for with a thus far unidentified revenue source.

Will Illinois Blow Up its Tax System? We Ask State Lawmakers 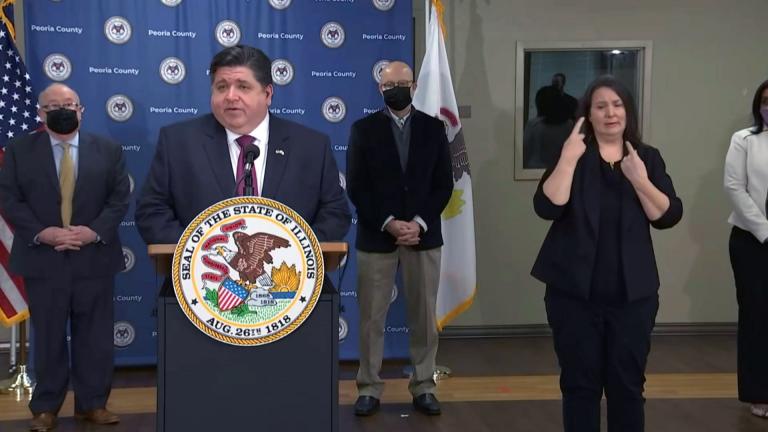