A Chicago gallery is hosting a show of strange artwork with an unusual history. In recent years, illustrations from 1970s Mexican comic books have earned a dedicated following of fans and collectors. It’s pulp fiction on canvas – colorful and a little bit wicked.

Jay Shefsky: They can be violent, shocking and sometimes weird enough to be called surreal.

They are original works of comic book art made in Mexico in the 1970s.

Aron Packer, fine art specialist, Toomey and Co.: There is the background color and then, like, three or four elements of contrast to make your jaw drop a little bit.

Shefsky: The show of pulp illustrations was assembled by a fine art specialist at Toomey and Co., an auction house in Oak Park.

Though he works in high-end art, his personal taste can go low.

Packer: I like the complete continuum of artwork, from the lowest brow to the highest brow. 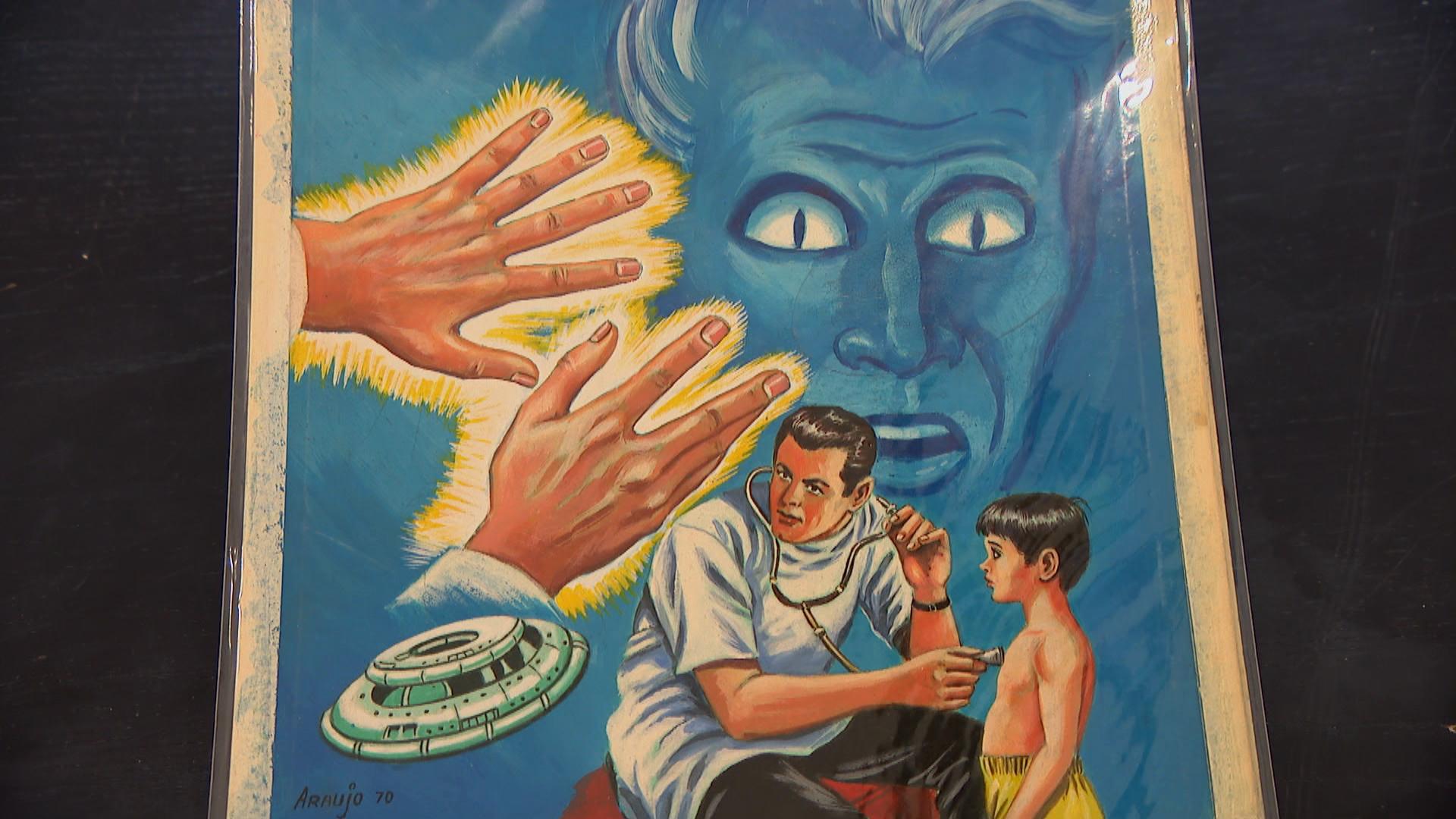 There’s something about the sort of like garish style and the color choices and the non sequitur surrealisms that are happening within these stories, like my favorite: There’s one of a huge face, sort of a ghost face, and then electrified hands and then a doctor taking the heartbeat of a young boy and then there’s a UFO in the corner, and it’s called “A Strange Power.” I think it’s just one of the greatest covers in this whole room, and actually there’s more than a hundred in this room.

Shefsky: The top third of each canvas board is empty of action – they had to leave room for the title.

Packer: It sort of makes for an interesting composition. You got two-thirds on the bottom, and then also of course these are oversized, these are almost all 10-by-14 inches high, and then of course they would shrink them down to like 4 inches by 3 inches, and so they could get this concentrated, sort of over-the-top scene that would make you want to purchase them every week.

Shefsky: There are no superheroes in the pictures – just ordinary people in extraordinary circumstances. 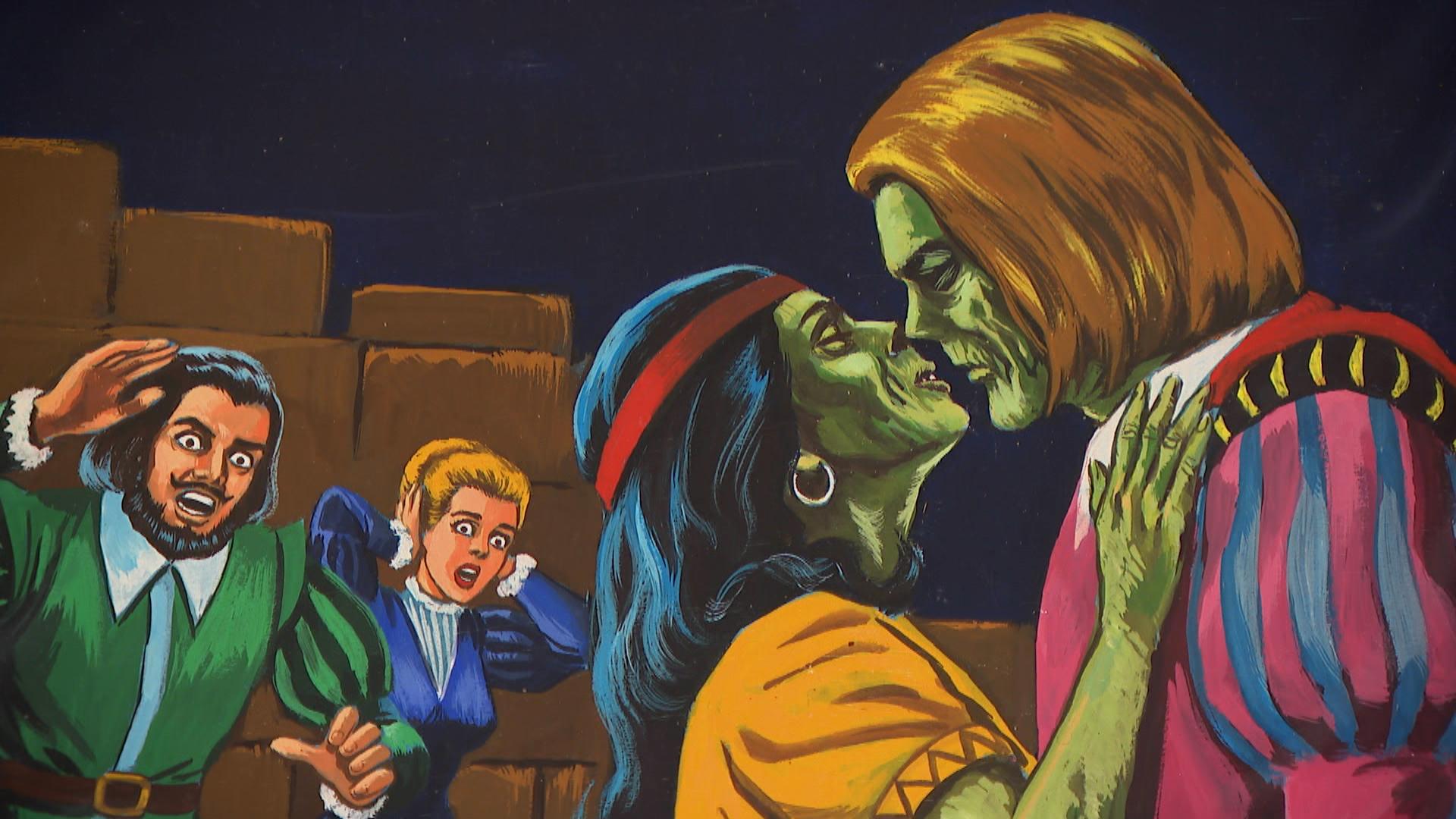 Supernatural legends inspire much of the work. The comic book stories they illustrated are called micro-cuentos.

My favorite are these full-out insane surreal covers.

Shefsky: There are mad scientists, curious monsters and action scenes that are about as subtle as a rolling pin to the head. 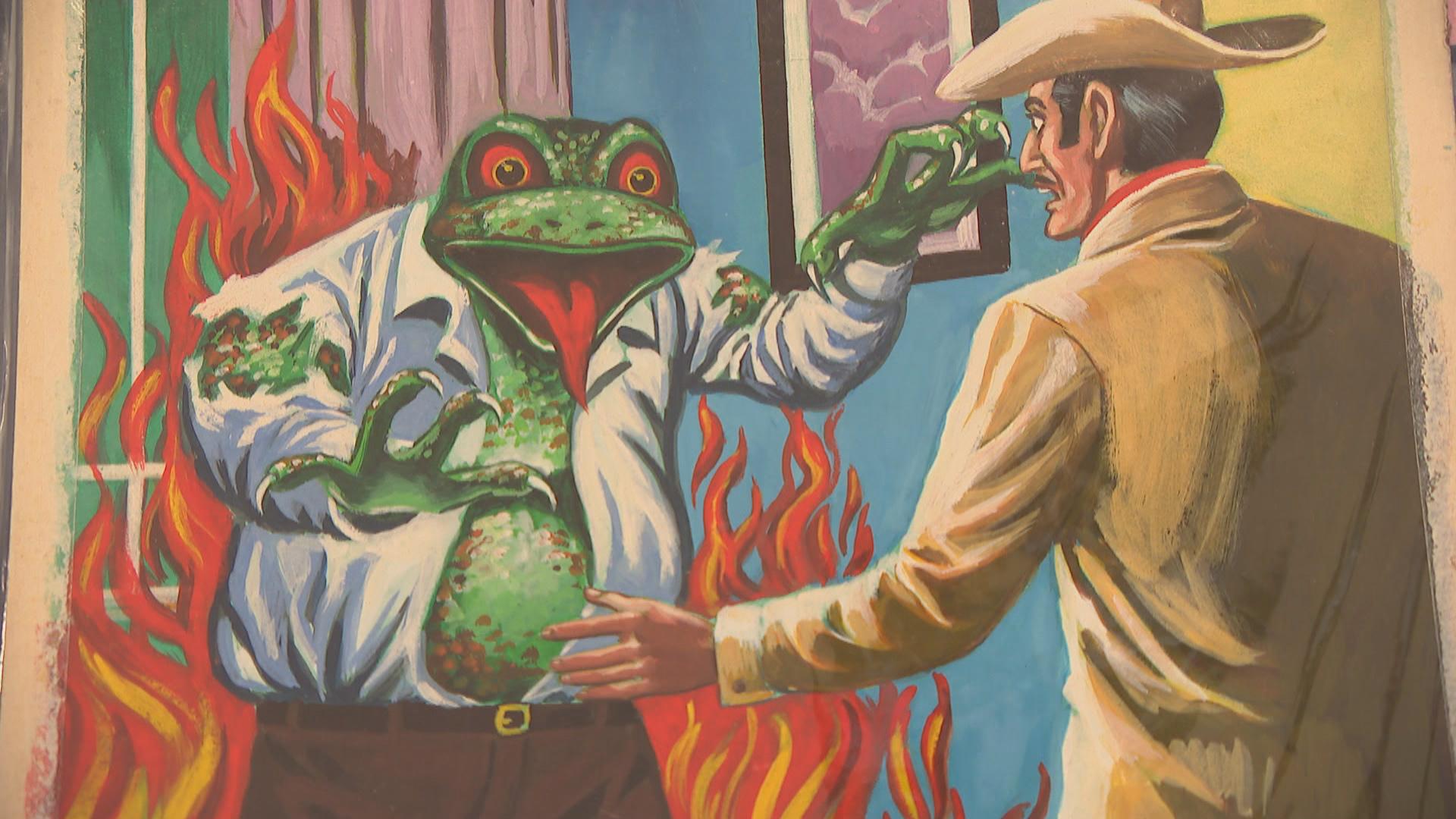 A still image taken from video shot at the gallery show “Pop Pulp!” at Firecat Projects.

They were all painted on deadline.

Packer: It’s basically a gouache, like an opaque watercolor, and I’m sure they were done very quickly and because they were gouache they would dry quickly. They’re actually made for production so if they needed to white-out an area and repaint it, you know, that doesn’t come out in the final comic book cover, so here and there there’s a couple little mistakes, and all the edges were taped and some of these pieces have the tape still left on them, but most aren’t dated and most aren’t signed. Certainly at the time they weren’t appreciated. They were really just full-time illustrators with no artistic glory.

These are not unlike sort of cover posters for telenovelas. It’s the same kind of story that you can see like on TV today, chapter to chapter and they leave you dangling with the last page.

They really want to lure you into signing onto the whole series, whatever that happens to be.

The show “Pop Pulp!” is on display at Firecat Projects through April 19, 2019. For more information, visit Aron Packer Projects.