A Day in the Life of a Cook County Burn Crew

Cook County has the largest forest preserve system in the country.

Since the early ‘90s, part of managing that land has involved burning parts of it from time to time. The fires are started on purpose and carefully managed. In fact, the kind of devastating fires that happen out West could not happen here.

“The trees we have are fire-dependent species and actually like the fact that the fire is here,” said John McCabe, who is in charge of the burn program for the Forest Preserves of Cook County. “Totally different than what happens out West.”

McCabe says the burns have a wide variety of benefits, including managing invasive plant species, promoting biological diversity and improving the health of the soil.

The burns take place in the spring and fall at sites throughout Cook County. On a recent spring day, “Chicago Tonight” was invited to work alongside one of the crews.

The day started long before we suited up, with final site selection, a weather check, and phone calls to alert local authorities about burn locations. There were 11 crews out that day, burning 24 sites. Each crew has five or six people.

We’ll go to a site close to their headquarters: Busse Woods. They say it’s an easy site, with just 7 acres of restored prairie. The ground is quite soggy, which makes walking through it awkward, but the plants are dry.

Elliot Medina is our burn boss.

And while they’ve burned this site – and many others – many times over, each site, and each day’s conditions, require a careful plan. Everyone has a job and there is a clear chain of command – a critical need in case anything gets out of hand. Some crew members are assigned to communicate with the public, and some – like me – will actually start the field on fire, using what they call a “drip torch.” 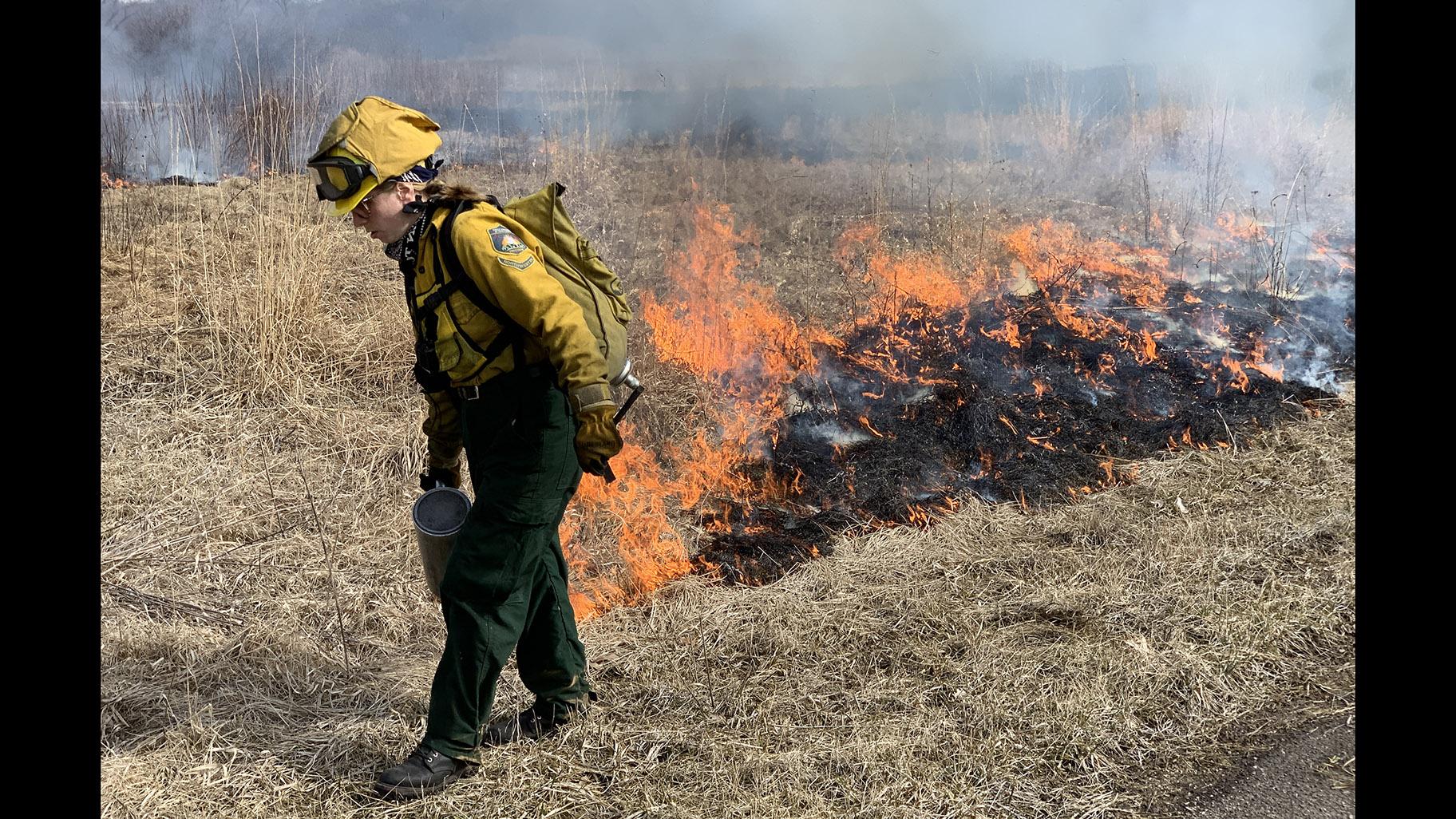 Monica Mueller is an ecologist with the forest preserves. She says the burn is especially helpful to native plant species.

“It really helps to stimulate them and cause them to produce more flowers and more seed,” she says. “Our prairie plants have deep root systems, they store all their energy underground and are able to come back quickly after a burn.”

In some places, crew members snuff out parts of the fire to keep it from spreading in the wrong direction. We’re using water in backpacks.  There are also water tanker trucks standing by.

And finally, they start what is called the "head fire" at the upwind edge of the site – it will be contained by the wider breaks along the perimeter we’ve already created.

And soon, what’s left is a burnt and smoldering field. McCabe says the area will grow back in two to three weeks.

And sure enough, when we stopped back two weeks later, not only was it looking pretty green, a coyote wandered by. Perhaps, to offer its approval.

The spring burning season is now over, and Cook County had it’s best spring ever: nearly 10,000 acres burned at 169 sites.

If you’re interested in learning about volunteer opportunities with the burn crew, email: [email protected].