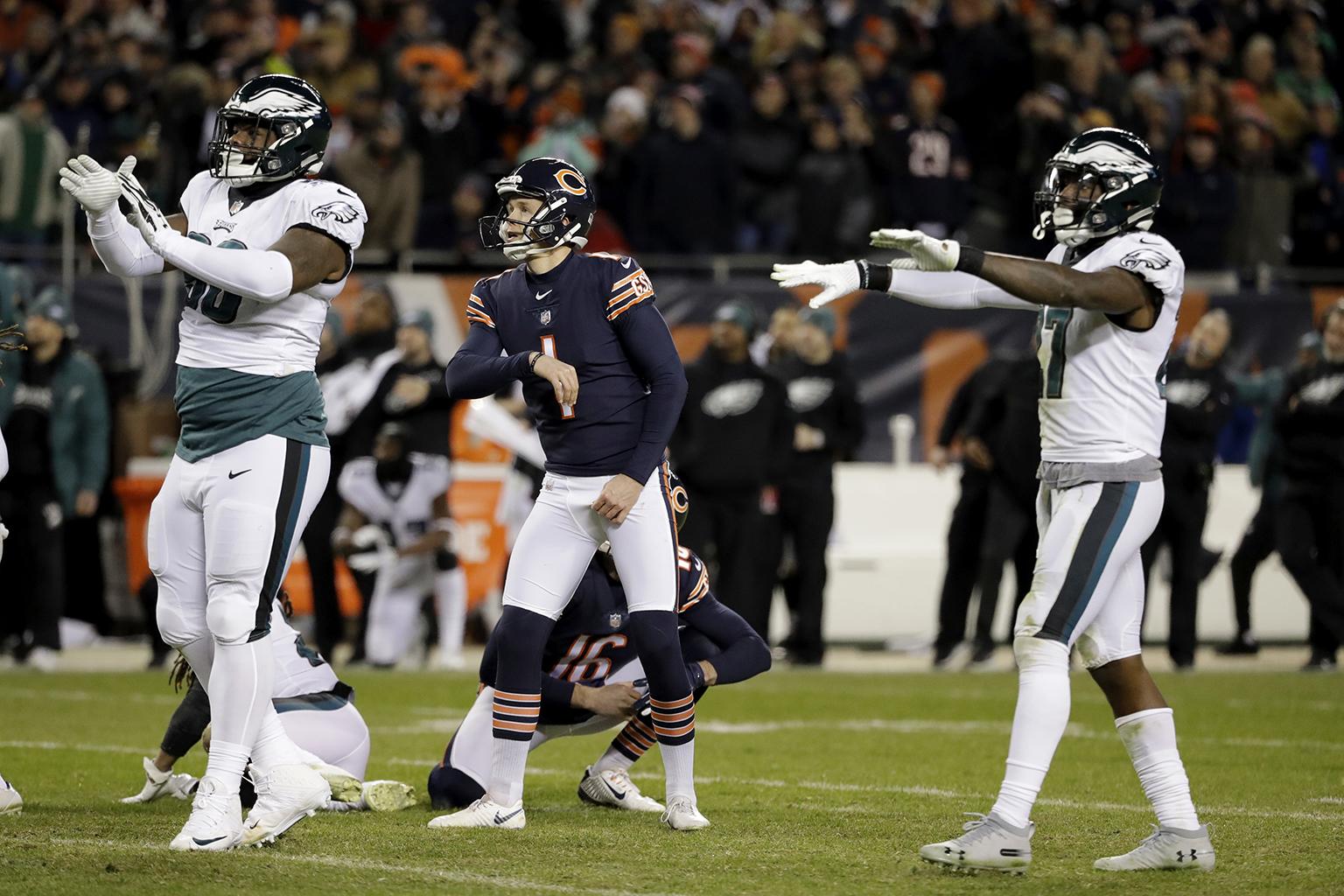 Chicago Bears kicker Cody Parkey (1) watches as he misses a field goal in the final minute during the second half of an NFL wild-card playoff football game against the Philadelphia Eagles Sunday, Jan. 6, 2019. (AP Photo / Nam Y. Huh)

PHILADELPHIA (AP) — Cody Parkey got an excuse he probably won't use.

Parkey's missed 43-yard field goal in the final seconds that gave the Philadelphia Eagles a 16-15 upset win over the Chicago Bears in Sunday's wild-card playoff game was officially ruled a block by the NFL.

Video showed Philadelphia's Treyvon Hester tipped the ball, which bounced off the upright and hit the crossbar.

Parkey was booed by Bears fans as he ran off the field after kneeling down with teammates and opponents for a postgame prayer. He accepted responsibility for the loss afterward.

Eagles coach Doug Pederson on Monday praised Hester, who began the season on the practice squad, for having “a big hand in the game” and the team posted on Twitter it was the first blocked field goal in the franchise's postseason history.

The Eagles took a one-point lead when Nick Foles threw a 2-yard touchdown pass to Golden Tate with 56 seconds remaining. Mitchell Trubisky drove the Bears into position to win it, but Parkey's kick didn't go through. Philadelphia plays at New Orleans next Sunday.

Hester's block should absolve Parkey from blame, though Bears fans certainly won't let him forget it anytime soon. Parkey's teammates stood by him after the game and players around the country quickly expressed their support on social media.

NBA star Dwyane Wade wrote on Twitter: “Most of you have no idea how hard this is to do. Cody Parkey way to face the media like a true professional. I'm a fan!”

Eagles kicker Jake Elliott wrote: “This is a standup guy that a lot of young players can look up to. This is how you handle adversity like a pro. Cody is a heck of a kicker and will be for a long time. No reason to be taking the heat he is especially when that ball was tipped. #ClassAct”

The Philadelphia Flyers poked fun at Parkey during Monday night's game against St. Louis. Gritty, the team's googily-eyed mascot, kicked a field goal blindfolded in the stands during a “Cody Parkey Challenge” and fans roared, breaking into the “Fly! Eagles! Fly!” fight song when the missed kick was shown on the video screen.