A major detente in the race for Chicago mayor: Cook County Board President Toni Preckwinkle announces she is withdrawing her very public petition challenge of Illinois Comptroller Susana Mendoza. This, as a new poll puts Preckwinkle and Mendoza at the top of the mayoral field. These stories and more in our weekly roundtable, Spotlight Politics.

On Wednesday, Preckwinkle dropped her challenge of Mendoza’s petitions after the Mendoza campaign sent a statement indicating it had crossed the 12,500 valid signature threshold. In a statement, the Preckwinkle campaign said it’s still unimpressed with Mendoza’s margin.

“While the campaign is dropping its challenge to Susana Mendoza’s petitions, Chicago voters should know that she just barely met the bar to be included on the ballot. This fits a pattern of Mendoza being unprepared to tackle the critical duties required of the office. Since getting into this race, Mendoza has repeatedly dodged questions and failed to bring any new ideas,” said campaign spokesperson Monica Trevino.

The Mendoza campaign shot right back, claiming the outcome of the challenge was never in doubt, and that the entire exercise was futile from the beginning.

“Today Susana’s opponent decided to drop her bogus petition challenge that she knew was nothing more than an attempt at a self-coronation and a complete waste of nearly $1 million in taxpayer dollars,” said Mendoza campaign manager Nicole DeMont. “The boss of the party bosses desperately tried to keep Susana out of the race and she failed. Despite what boss Preckwinkle hoped, there will be an election and voters will hold her accountable for her record of raising taxes first and providing transparency last. Her political games are exactly why Chicago needs a mayor focused on the next generation, instead of just the next four years.” 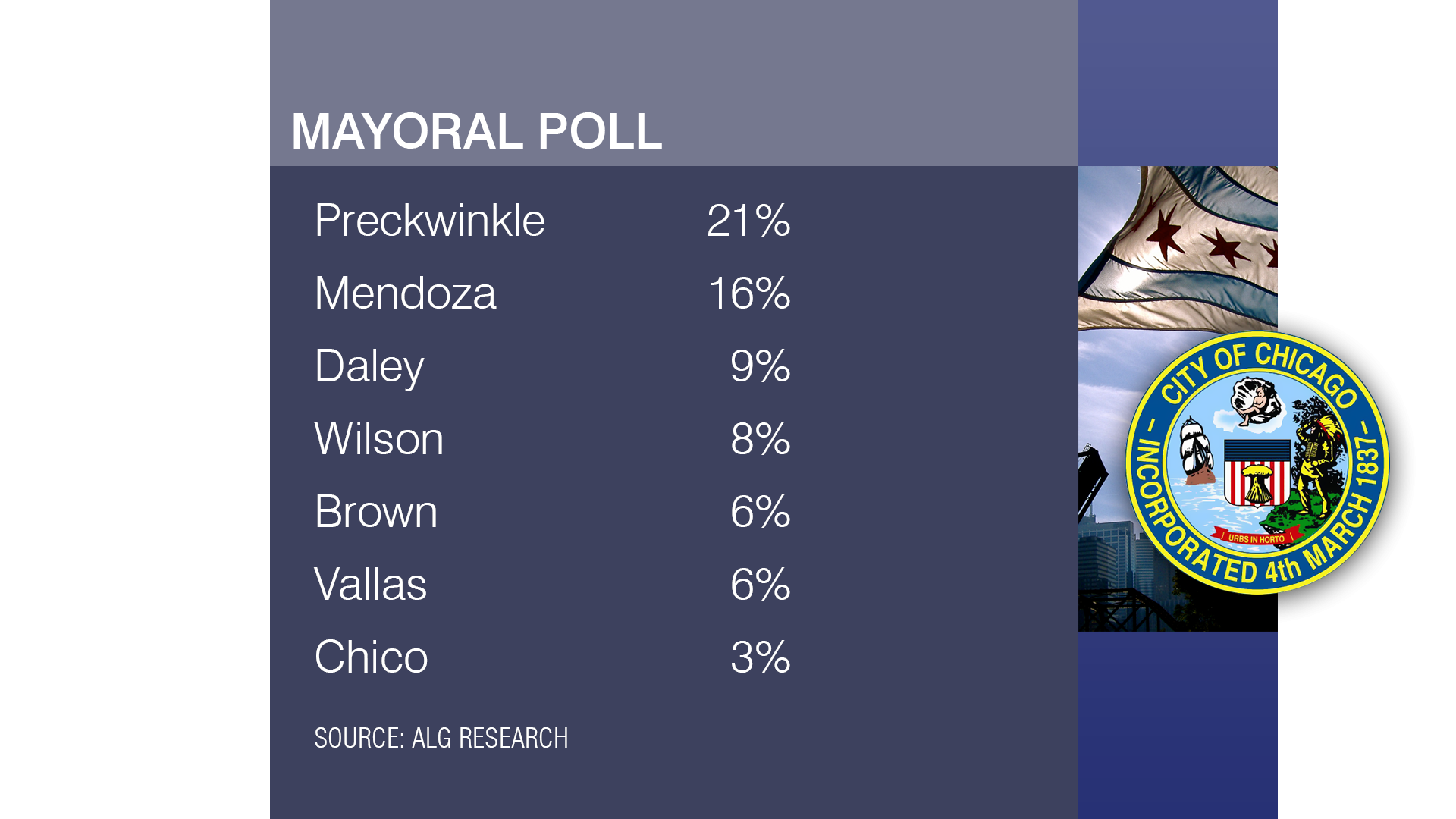 The Preckwinkle campaign was hoping it could force Mendoza off the ballot by challenging the amount of valid, legal signatures on her petitions. And they might have had good reason, given a new poll out Wednesday, published by ALG Research. It asks participants who they would vote for if the mayoral election were held Wednesday. Preckwinkle led the pack at 21 percent, with Mendoza in second place at 16 percent, and Bill Daley in third with 9 percent. Following were: Garry McCarthy (8 percent), Dorothy Brown and Paul Vallas (6 percent), Amara Enyia (5 percent) and Gery Chico (3 percent).

In a head-to-head matchup, Mendoza bested Preckwinkle 45 percent to 39 percent.

In other mayoral news: Petition challenges are ongoing at the Chicago election board. Candidates Lori Lightfoot and Dorothy Brown face challenges from Preckwinkle, while Ja’Mal Green and Neal Sales-Griffin face challenges from Willie Wilson. The field is expected to narrow somewhat as the process unfolds, with an election judge issuing a preliminary finding that Green is under the 12,500 valid signature threshold. Green’s case will go before the three-member Board Of Election Commissioners.

Preckwinkle forces also expressed confidence that Brown would not meet the threshold at the end of the process.

The majority of the candidates running for mayor have thus far made their tax returns public, despite requests from media organizations including WTTW. Some have committed to doing so, but haven’t yet; among them: Daley, Green and Wilson.

But other candidates may not do so at all. Spokespeople for Jerry Joyce, McCarthy and Enyia say those candidates are undecided as to whether they’ll release the tax forms, which are a tool that can be used to determine potential conflicts of interest. Enyia, who is running on a platform of transparency, pushed back on that notion, with her spokeswoman saying the public release of tax returns enables the wealthy to hold onto power while putting other candidates in “compromising” positions.

Vallas on Wednesday challenged every contender to release his or her most recent income tax filings, “or they should be looked at by voters with the clear assumption that they have major issues they are hiding.”

“This is no time for our next mayor to be veiled in secrecy,” Vallas said in a statement. “Every mayor of Chicago, for more than 30 years, has fully disclosed their taxes. It is absolutely expected by the voters.”

If she’s elected mayor, Preckwinkle would fire Chicago’s police Superintendent Eddie Johnson, telling the Chicago Sun-Times that Johnson doesn’t have the characteristics of a good leader because he covered up bad behavior and “refused to acknowledge that there was a code of silence in the Police Department … I don’t think that’s an honest statement.”

Mayor Rahm Emanuel has, at least in public, stayed out of the fray. But he took umbrage with Preckwinkle’s statement and on Monday stood up for his hand-picked top cop.

“The Superintendent … had led an unprecedented transformation of our police department, its culture, its training, its rank-and-file, its investment in adoption of technology and also seen significant reductions, two years in a row, back-to-back, on shootings and robberies,” he said. “To see that reduction at the same time you’re making fundamental changes to the police department is a testament to his leadership and the leadership.”

Johnson himself also fired back at a ceremony for a new class of recruits.

“I came on this job with my integrity and my honor and that’s what I’m going to leave this job with,” Johnson said. “We have a responsibly as leaders to talk about the facts of what’s going on in this city and the fact is I never denied (a code of silence culture), that’s a fact. The fact is, when you go into a court to testify, you’re testifying truthfully to what you know. I can’t cite specific examples of things like that. Bu the fact is from day one I have acknowledged that there’s racism in the police department. From day one, I have acknowledged that there’s misconduct. From day one I have also said that’s a small minority of police officers.”

Johnson said it times time to change culture, and he doesn’t “tolerate misconduct.”

While they’re feuding elsewhere, Preckwinkle and Mendoza both agreed on one thing: They want to get some distance from longtime Ald. Ed Burke in the face of multiple FBI raids of his offices. Burke has contributed to each of their campaign funds. Now, they’re each turning around and giving an equivalent amount to charity.

Preckwinkle is sending roughly $12,000 to charities to empower the Latino community while Mendoza is taking about $10,000 from her campaign coffers to families of fallen police officers.

On his final full month as Illinois’ governor, Republican Bruce Rauner unveiled a statement that shocked leaders of his own party. He tried to recruit four others to run for mayor in his stead after he’d (barely) clinched the GOP nomination. Reportedly, Rauner looked to Cubs owner Tom Ricketts, retired state Sen. Karen McConnaughay of St. Charles and lawyer Erika Harold, the party’s nominee for attorney general in the same November election.

"I told them I’ll step aside, give you huge financial resources. You run for governor, and I’ll support you. You have as good or better chance to get elected than me," Rauner told WLS-TV in an interview with Craig Wall.

The problem is, that’s not how the process works. Rauner wouldn’t have gotten to hand-pick a replacement. If he had dropped out of the race, it would have been up to party leaders to choose a stand-in.

Though Rauner, as its top donor, has been the de facto head of the Illinois Republican Party, some of his actions as governor fracturing of the party – divisions that surely would have been stirred up had he walked away from the nomination.