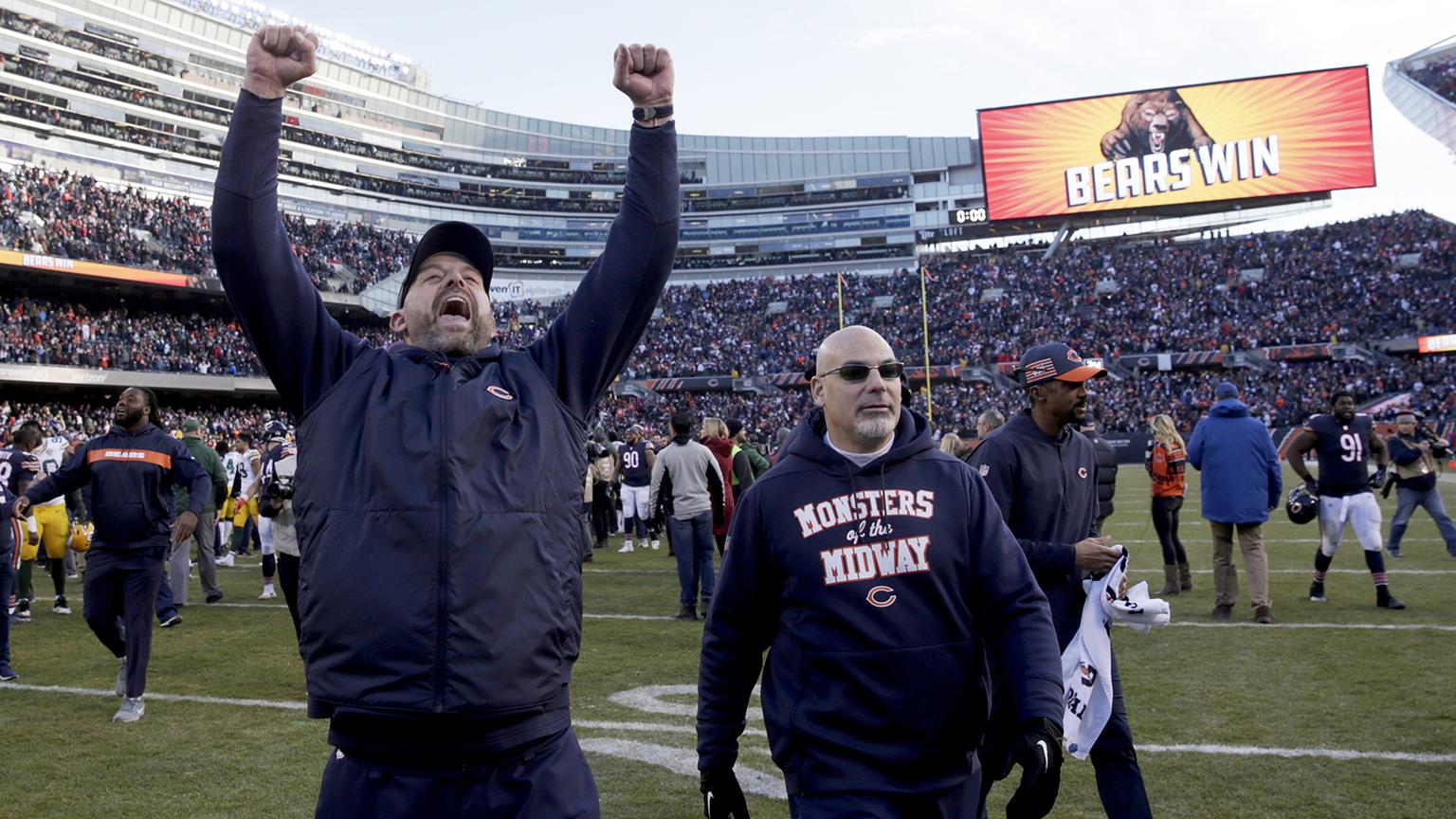 CHICAGO (AP) — The Chicago Bears clinched the NFC North and helped knock Aaron Rodgers and the Green Bay Packers out of playoff contention.

They could not have asked for a sweeter scenario.

Mitchell Trubisky threw for two touchdowns, Eddie Jackson ended Rodgers' NFL-record streak without an interception and Chicago clinched the division with a 24-17 victory over the Packers on Sunday.

The Bears (10-4) secured their first playoff appearance since the 2010 team won the NFC North. And even better for them, they did it with a rare victory over their heated rivals.

“We've accomplished a lot,” Trubisky said. “But I think I'm most proud of just the type of guy that we have in our locker room, the culture that we've kind of created. We know that nobody really believed in us on the outside in the preseason — or even throughout the season. But we knew what type of team we had. And we knew we were just gonna keep getting better every single week.”

The loss coupled with Minnesota's 41-17 victory over Miami keeps the Packers out of the postseason for the second year in a row.

Chicago had dropped nine of 10 against Green Bay (5-8-1). But the Bears secured their first trip to the playoffs in eight years with their seventh win in eight games.

For a team that came into the season with four straight last-place finishes, it's quite a turnaround. But with the hiring of coach Matt Nagy and trade for Khalil Mack in a busy offseason, the Bears made a huge jump.

“You could feel it all year long that we knew we had the talent,” Nagy said.

The Bears blew a 20-point lead in a season-opening loss at Green Bay, with an injured Rodgers rallying the Packers. But they've been climbing since.

Trubisky gave the Bears a 21-14 lead early in the fourth quarter with a 13-yard pass to Trey Burton in the left side of the end zone. 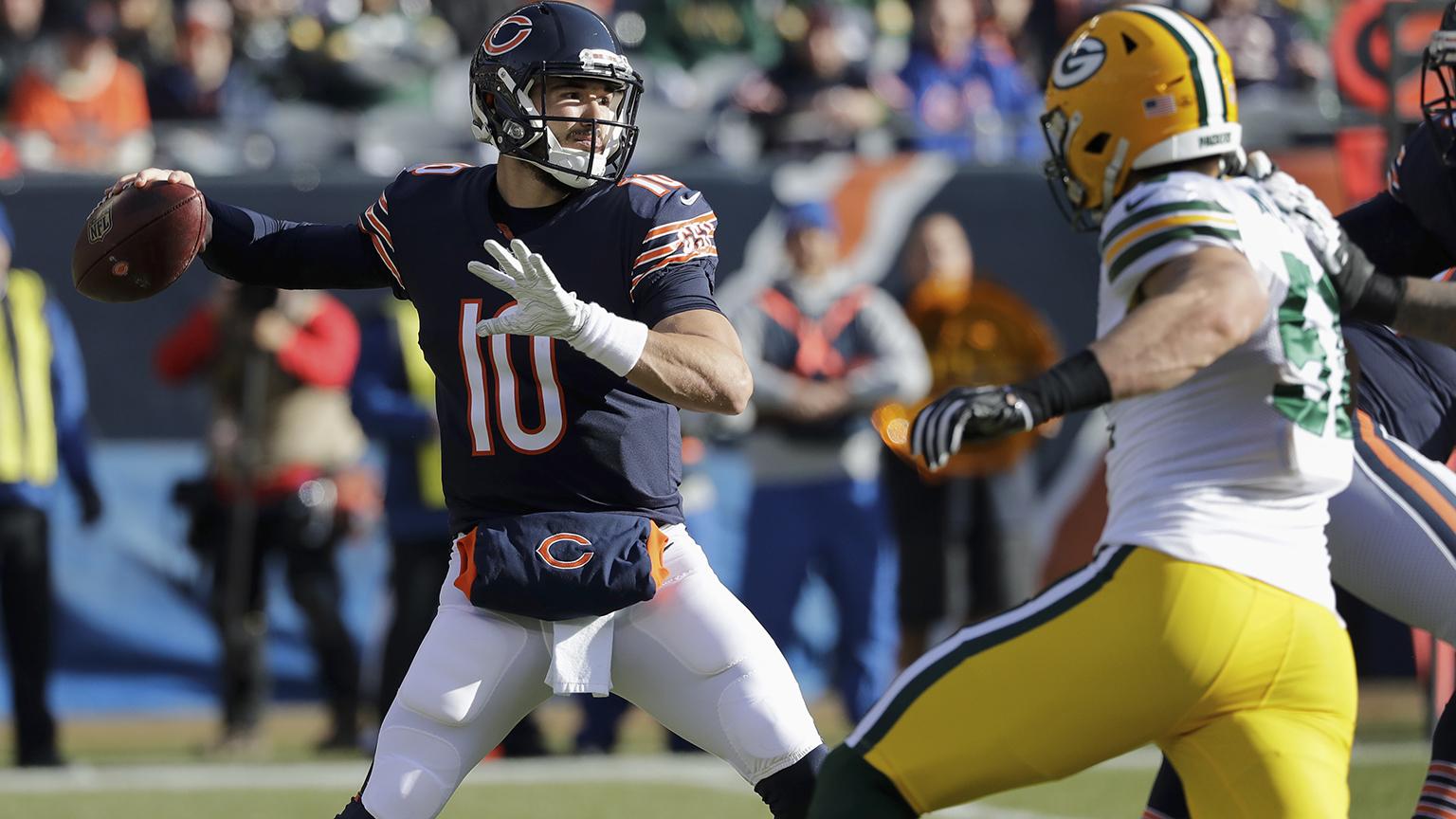 After stopping the Packers, Tarik Cohen returned a punt 44 yards to the 15. But he stepped out of bounds a yard short on a third-and-5 at the 10 when he easily could have gotten the first down.

That forced the Bears to settle for a field goal by Cody Parkey, making it 24-14 with 6:43 remaining.

The Packers then drove to the 9, but on third down, Jackson picked off Rodgers, ending his streak at 402 passes.

The throw over the middle was intended for Jimmy Graham near the goal line. But the ball got tipped to Jackson, who had to be helped off the field with a sprained right ankle after his leg bent awkwardly as he tried to slide on the return. The interception was his sixth of the season.

Mason Crosby kicked a field goal in the closing seconds to make it a seven-point game. But Chicago recovered the onside kick.

“The expectation is competing for championships,” Rodgers said. “It's a good football team. But like I told some of the guys, I look forward to the battles over the years. I like our chances in this division moving forward.” 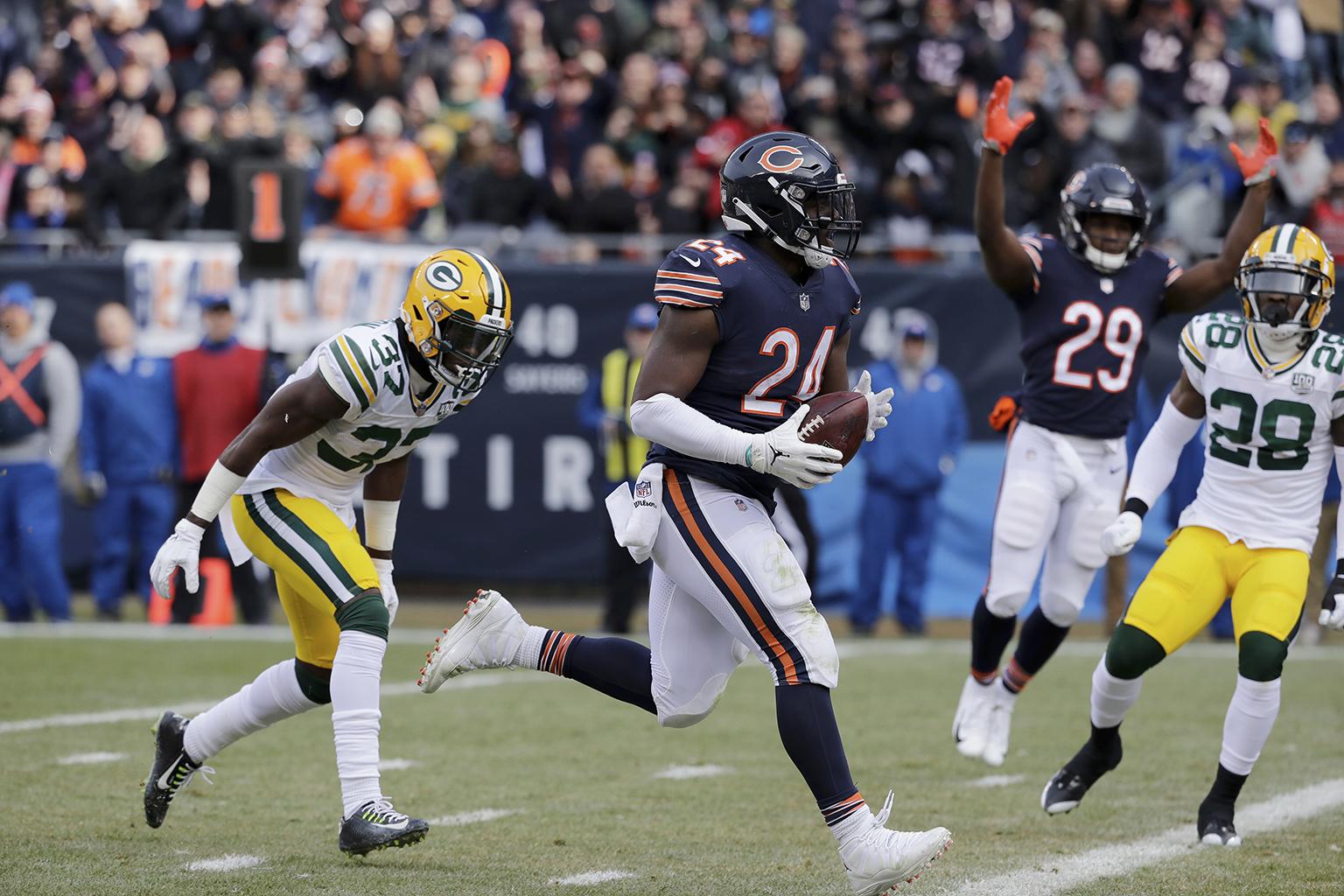 Chicago Bears running back Jordan Howard (24) runs to the end zone for a touchdown during the first half of the Sunday, Dec. 16, 2018 game against the Green Bay Packers. (Nam Y. Huh / AP Photo)

The Bears, who finished in fourth place in the NFC North last season, completed a turnaround that make for 15 of the past 16 seasons with at least one NFL team finishing in first place in its division the season after finishing in last or tied for last place.

And Nagy became the Bears' first rookie coach with 10 wins since George Halas in 1920, the inaugural season for a franchise then known as the Decatur Staleys.

Mack had 2½ sacks and Leonard Floyd added two. The defense came through with another strong effort after the Monsters of the Midway shut down Jared Goff and the NFC West champion Los Angeles Rams the previous week.

Trubisky was 20 of 28 for 235 yards with a 120.4 rating. It was a big improvement over the previous week when he matched a career high with three interceptions after missing back-to-back games because of a right shoulder injury.

Cohen caught a touchdown pass. Jordan Howard ran for a TD, and the Bears improved to 7-1 at home for the first time since 2005.

“Guys grinded, gritted it out, especially toward the end,” Mack said. “We just want to keep this feeling going.” 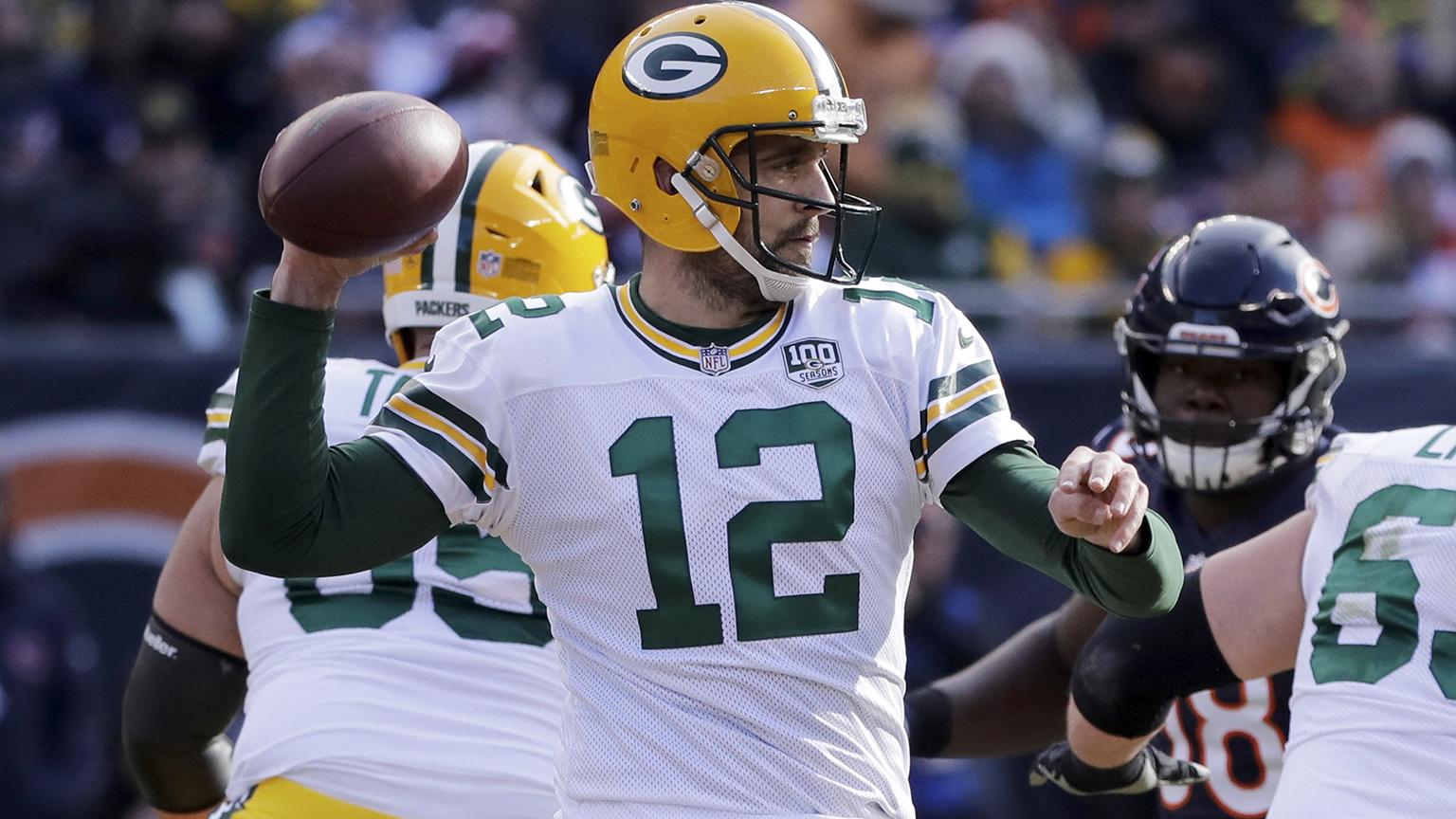 Rodgers said his groin tightened on him at the end of the first half. He finished 25 of 42 for 274 yards with his second interception of the season and failed to throw a touchdown for the first time this year.

The Packers fell to 0-7 on the road with their ninth straight loss away from home, and their eight-game win streak at Soldier Field, counting the postseason, came to an end.

“Nobody anticipated this happening,” Clay Matthews said. “In reality, we're not getting blown out every week. I'm trying to find a silver lining, that's all you can do at this point of the season.”

Packers: RT Bryan Bulaga (knee) missed his second game in a row, while DL Kenny Clark sat out with an elbow injury. ... RB Aaron Jones left the game with a knee injury in the first quarter. ... WR Randall Cobb was evaluated for a concussion following a hard hit by Jackson late in the game.

Bears: LB Aaron Lynch left with an elbow injury in the third quarter. 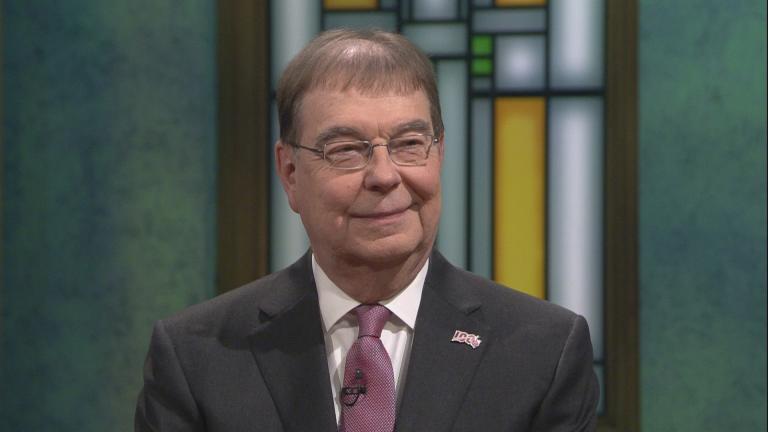 As Bears Season Ends, Team Looks Ahead to Future