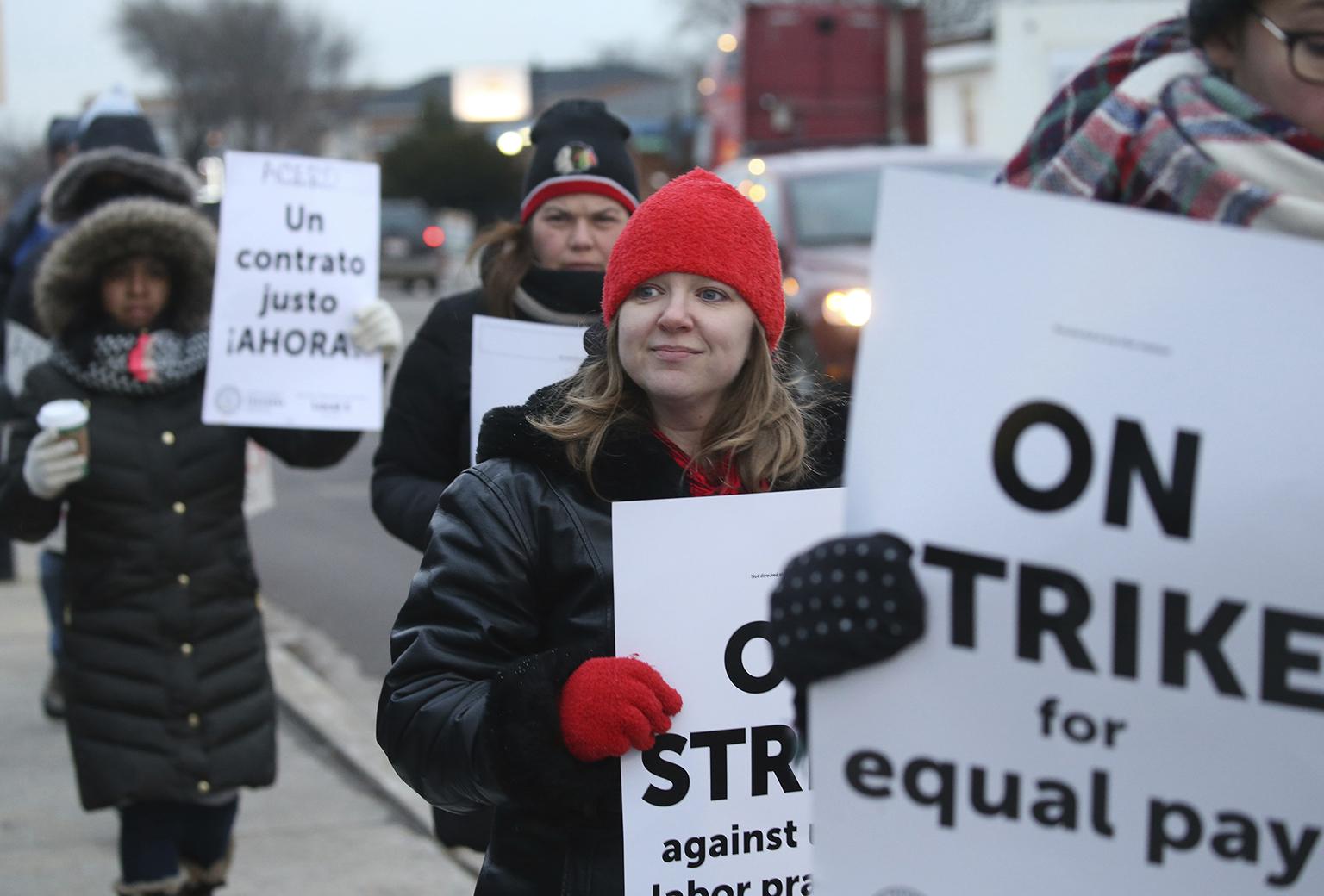 CHICAGO (AP) — Teachers employed by a Chicago charter school network took to the picket lines Tuesday in what their union described as the first strike at any of the privately run, taxpayer-funded schools in the U.S.

The strike at Acero’s 15 charter schools in Chicago following months of failed contract negotiations comes amid an increase in educator activism nationwide. Teachers in Kentucky, Arizona, Oklahoma, West Virginia and elsewhere converged on state capitols this year to fight for more pay and other funding issues.

Classes were canceled for Acero’s 7,500 predominantly Latino students, and Chicago Teachers Union President Jesse Sharkey said the strike would last “until they come back with an offer that respects our students and the people who educate them.”

“Whether we are in West Virginia or Chicago, teachers want and need a voice in order for us to ensure that children get what they need,” said Randi Weingarten, president of the 1.7 million-member American Federation of Teachers, which includes the Chicago union. “That is why we are walking out for our kids today.”

“There is absolutely no good reason to put students and parents through the upheaval of a strike,” Rodriguez said. “The sad fact is that interests from outside our community are using our students and our schools as a means to advance their national anti-charter platform.”

President of the Chicago Teachers Union Jesse Sharkey talks with members of the media as charter school teachers and their supporters walk the picket line outside the Acero’s Zizumbo Elementary Charter school on Tuesday, Dec. 4, 2018. (Antonio Perez / Chicago Tribune via AP)

Charter schools are allowed in 44 states and are funded by public money while being operated by nonprofit organizations, such as Acero, or by for-profit companies. U.S. Education Secretary Betsy DeVos and Microsoft co-founder Bill Gates are among their prominent backers.

Acero’s teachers are paid up to $13,000 a year less than their counterparts at Chicago’s traditional public schools, while working 20 percent more hours, according to the Chicago Teachers Union. The union also argues that with only one adult for up to 32 children per class for kindergarten through second grade, Acero’s classes are too large.

The striking teachers are also demanding that Acero agrees to not share information with federal immigration enforcement officials or allow them into the schools without a warrant.

Yecenia Iturve, a fourth-grade Acero teacher, said many of her students face anxiety over their family’s immigration status.

“Being a sanctuary school means that our students, and their family, have a safe place to come to. Our students need to know this is a safe place for them,” Iturve said. “With the way national politics are going, I think it’s necessary for this kind of language and protection to be in our contracts.”

Some 26,000 Chicago Public Schools teachers staged a seven-day strike in September 2012 over issues such as the district’s demand for longer school days, along with disagreements over teacher evaluations and job security. The walkout idled 350,000 students in the nation’s third-largest school district as teachers pushed back against changes sought by Mayor Rahm Emanuel. The district pulled back from the brink of a second strike in October 2016.