In shaping the U.S. Constitution, our Founding Fathers went to great lengths to put limits on presidential powers. Decades of autocratic rule by the British monarchy had made it clear that one individual shouldn’t be able to make unilateral decisions – especially about going to war. And so the Constitution’s framers gave Congress the power to declare war and the president the power to direct the military.

The new book “Presidents of War” by presidential historian Michael Beschloss covers more than 200 years of commanders in chief leading America in times of war, but also examines how presidents have largely ignored congressional approval for war since World War II.

Beschloss, whose many distinctions include being a native Chicagoan, joins us to discuss his book.

Below, an excerpt from “Presidents of War.” 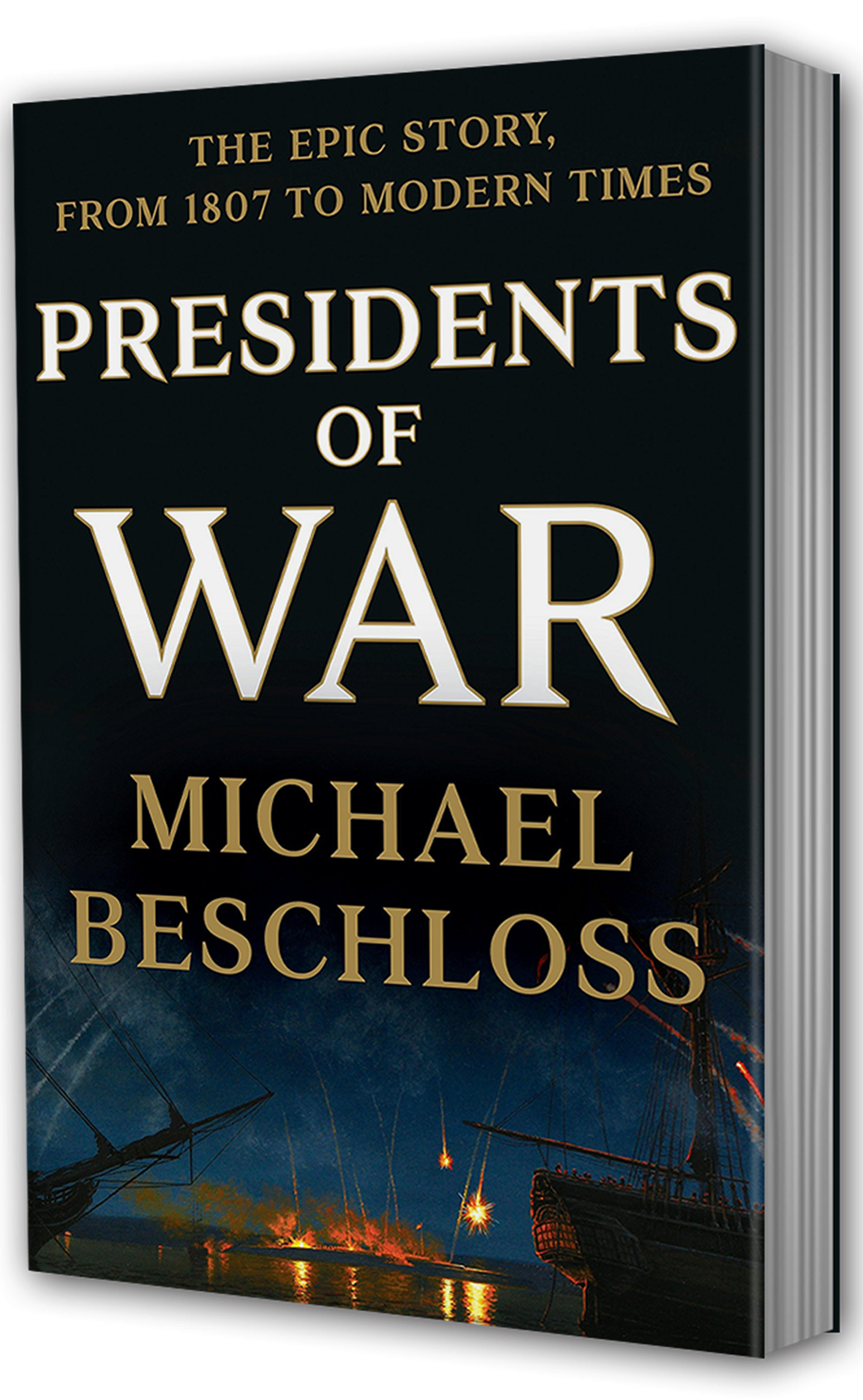 And so it had come to this. Horrified as he stood on a height above the Potomac, James Madison, the fourth President of the United States—and now, some wondered, the last?—watched his beloved Washington City as it seemed to vanish into a crimson-orange swirl of fire. It was after midnight on Wednesday, August 24, 1814, and Madison was a fugitive, escaping the Capital— first by ferry, then by galloping horse—for the dark wilderness of Virginia.

Still wearing formal knee breeches and buckled shoes, the sixty- three-year-old Madison knew that the invader-incendiaries from Great Britain were out for his capture and arrest, which might force him to be hanged. But he kept dismounting his horse to stare, with those intelligent blue eyes that “sparkled like stars,” at the inferno across the Potomac. He could not help himself. As a student of the Bible since col- lege, Madison knew that God had warned Lot’s wife not to look back at burning Sodom or else become a pillar of salt. Nevertheless the beleaguered President— who stood about five feet, four inches, and weighed perhaps a hundred pounds—kept gazing at the flaming, otherworldly spectacle, the nadir of the War of 1812, which many Americans bitterly called “Mr. Madison’s War.”

Earlier that day, Madison’s popular, shrewd, vivacious wife, Dolley, had stayed behind at the Executive Mansion while James was out reviewing the forces charged with Washington’s defense. She asked her husband’s enslaved body servant Paul Jennings (who once lauded the President as a man who would not “strike a slave”) to bring out ale and cider in anticipation of a three o’clock White House dinner they were planning for Cabinet secretaries, “military gentlemen,” and their wives.1 Dolley hoped that if Washingtonians learned that the President’s lady was keeping a normal schedule, they would feel more sanguine about the danger of the approaching British marauders. But she received a worried, scribbled plea from her nearby sister Anna: “Tell me for gods sake where you are. ... We can hear nothing but what is horrible here.”

From the Mansion, Dolley peered anxiously through a spyglass with “unwearied anxiety.” As she wrote her other sister, Lucy, she was thinking, “Mr. Madison comes not; may God protect him!” Recoiling from the distant booms of British cannon, Dolley refused to flee until “my dear husband” was safe in her arms. But in preparation, she quickly packed letters, books, valuables, a demijohn of wine, and clothes. Determined to prevent the British from grabbing the life-sized portrait of George Washington, an irresistible battle trophy, she called out, “Save that picture! If not possible, destroy it!” She ordered the painting removed from its gilded frame and taken by wagon to a “humble but safe roof,” thus ensuring her place in American history. (The Declaration of Independence, Constitution, and other treasures had already been slipped into plain linen sacks and taken to a Virginia gristmill.)

Then the Madisons’ freedman servant James Smith, waving his hat, cantered up with a message from the President: “Clear out! General Armstrong has ordered a retreat!”2 Stuffing flatware into her handbag, Dolley and Sukey, her enslaved personal maid, were helped into carriages, which rushed them and their traveling companions across the Potomac to the wilds of northern Virginia, where she and James had agreed to meet. But Dolley was told that the President could not be found, and she cowered in agony and tears. Part of her fear stemmed from the fact that the British invaders were not her husband’s only en- emies. Furious at the invasion of their Capital and, in fact, at Madison’s whole war, some of his own countrymen had vowed to commit violence against the President if he tried to flee the city. “I hear of much hostility towards him,” Dolley had warned her sister Lucy. “Disaffection stalks around us.” One American had threatened the President with “dagger or poison.” According to Paul Jennings, when Dolley was desperately seeking safe haven that night in Virginia, one would-be hostess raged at her, “If that’s you, come down and go out! Your husband has got mine out fighting and, damn you, you shan’t stay in my house!”

Back across the Potomac, about 150 British soldiers—“the most hellish looking fellows that ever trod God’s earth,” recalled one bystander— torched the Capitol of the United States. At nine o’clock, spurred on by the British Rear Admiral George Cockburn, soon called “the harlequin of havoc,” with “sun-burnt visage and his rusty gold-laced hat,” the arsonists had laid siege to the limestone building—two still-unconnected wings shut down in midconstruction by the war. In the chambers of the House, Senate, and Supreme Court, the enemy soldiers piled up mahogany desks, red morocco chairs, green curtains, and books. Before they lit this tinder with rocket powder, Cockburn sat in the House Speaker’s chair and mocked the democratic pretensions of Britain’s ex-colonies, demanding of his brother redcoats, “Shall this harbor of Yankee ‘democracy’ be burned? All for it will say, ‘Aye!’”

Soon the Capitol was enveloped by jagged tongues of orange flame, so searing that glass lamp shades melted. Cockburn decreed the raising of his own country’s Union Jack, then, riding on a mule, ordered his redcoats to march double file down Pennsylvania Avenue. Demanding their silence, to avoid arousing Washingtonians to fight back, Cock- burn shouted, “If any man speaks in the ranks, I’ll put him to death!” One American yelled at Cockburn that if George Washington were still alive, “you could not have done this.” The Admiral replied that George Washington, unlike Madison, would never have “left his capital defenseless, for the purpose of making conquest abroad.”

Bursting into the White House, Cockburn’s soldiers sat down at the dining table—still set with crystal, gold, and silver—and feasted on the Madisons’ uneaten Virginia hams and “super- excellent Madeira.” Marching upstairs into the President’s private dressing room, whose opened drawers betrayed a hasty departure, Cockburn seized the black bicorne military hat owned by the man he derided as “Little Jemmy Madison” and merrily stuck it on the tip of his bayonet. Stealing a seat cushion from Dolley’s boudoir, Cockburn made ribald jokes about her voluptuous derriere and breasts. Other redcoats donned the President’s starchy shirt and waved his ceremonial sword. Madison’s guitar and pianoforte, a half-packed portmanteau, and French sofas and commodes purchased by Thomas Jefferson were all gathered and shoved into a pile in the Mansion’s grand oval reception room. These and other spoils of war were lit by perhaps fifty torches, each charged with glowing coals from a nearby tavern. Soon, it was said, the Mansion was “wrapt in one entire flame.” Cockburn reputedly finished his night of destruction at a nearby brothel, reveling in “the coarse luxury of lust.”

James Madison, who had done so much to conceive the political institutions of Washington, DC, was reviled by many of his fellow citizens as the destroyer of their capital city. Vicious handbills appeared, demanding that the President receive a “black and bitter day of retribution” for “this foul stain on our national character.” They called him a “coward” who had fled his White House command post for Virginia, “begging” shelter and bread “from door to door”—and a cad, leaving poor Dolley “to shift for herself.” Such attacks stung the proud Madison. But his ordeal was more profound.

The War of 1812 was the first major conflict conducted by a President of the United States under the document of which Madison was justly revered as the “Father.” During the Constitutional Convention at Philadelphia, Madison and the other Founders had debated the quandaries of war. They sought to ensure that, unlike in the Old World societies governed by sovereigns, Americans would go to war only when it was absolutely necessary—and that the decision would be made not by the President but by the legislature. Virginia’s George Mason had written that he was “ag[ainst] giving the power of war to the Executive, because [that branch was] not safely to be trusted with it.” James Wilson of Pennsylvania insisted that the Constitution “will not hurry us into war; it is calculated to guard against it.” Madison himself considered war “the true nurse of executive aggrandizement.” As he reminded Jefferson in 1798, “The constitution supposes, what the History of all Gov[ernmen]ts demonstrates, that the Ex[ecutive] Is the branch of power most interested in war, & most prone to it. It has accordingly with studied care, vested the question of war in the Legisl[ative].”3

The 1812 conflict proved to be the first major test of the constitutional system for waging war. In Philadelphia, Madison the Founder had worried that American Presidents, like the European monarchs they execrated, might be tempted to take the nation into military confrontation without a national consensus and an immediate, overwhelming foreign danger. But with the War of 1812, Madison had, however reluctantly, succumbed to exactly that temptation. Much of the country and Congress had opposed waging war with Great Britain, and two years into this struggle, many Americans still did not fully understand why they were fighting.

By leading his country into a major war that had no absolute necessity or overwhelming support from Congress and the public, Madison, of all people, had opened the door for later Presidents to seek involvement in future conflicts that suffered from such shortcomings. Madison’s fateful decision to seek this war had brought him, after midnight, to this dark Virginia forest, searching for Dolley and running for his life.

1 The President’s residence was not officially called the White House until President Theodore Roosevelt issued an executive order to this effect in 1901, but the term was occasionally used during Madison’s time.

3 Early in the process, Congress was to be given authority to “make” war, but Madison and Elbridge Gerry of Massachusetts successfully changed that word to the more specific “declare,” so the record shows, “leaving to the Executive the power to repel sudden attacks.”