If it hasn’t already, a flier will soon be arriving in the mailboxes of many of Illinois’ approximately 400,000 public school teachers, state employees and municipal workers (including police officers and firefighters) informing them that their “legal rights as a government employee have changed.”

It’s an early salvo in what will surely be a protracted battle for the allegiances of union-eligible public workers.

The flier was sent by the Illinois Policy Institute, a self-described free-market think tank with links to billionaires like Dick Uihlein, who are bankrolling campaigns for conservative candidates in Illinois and elsewhere. 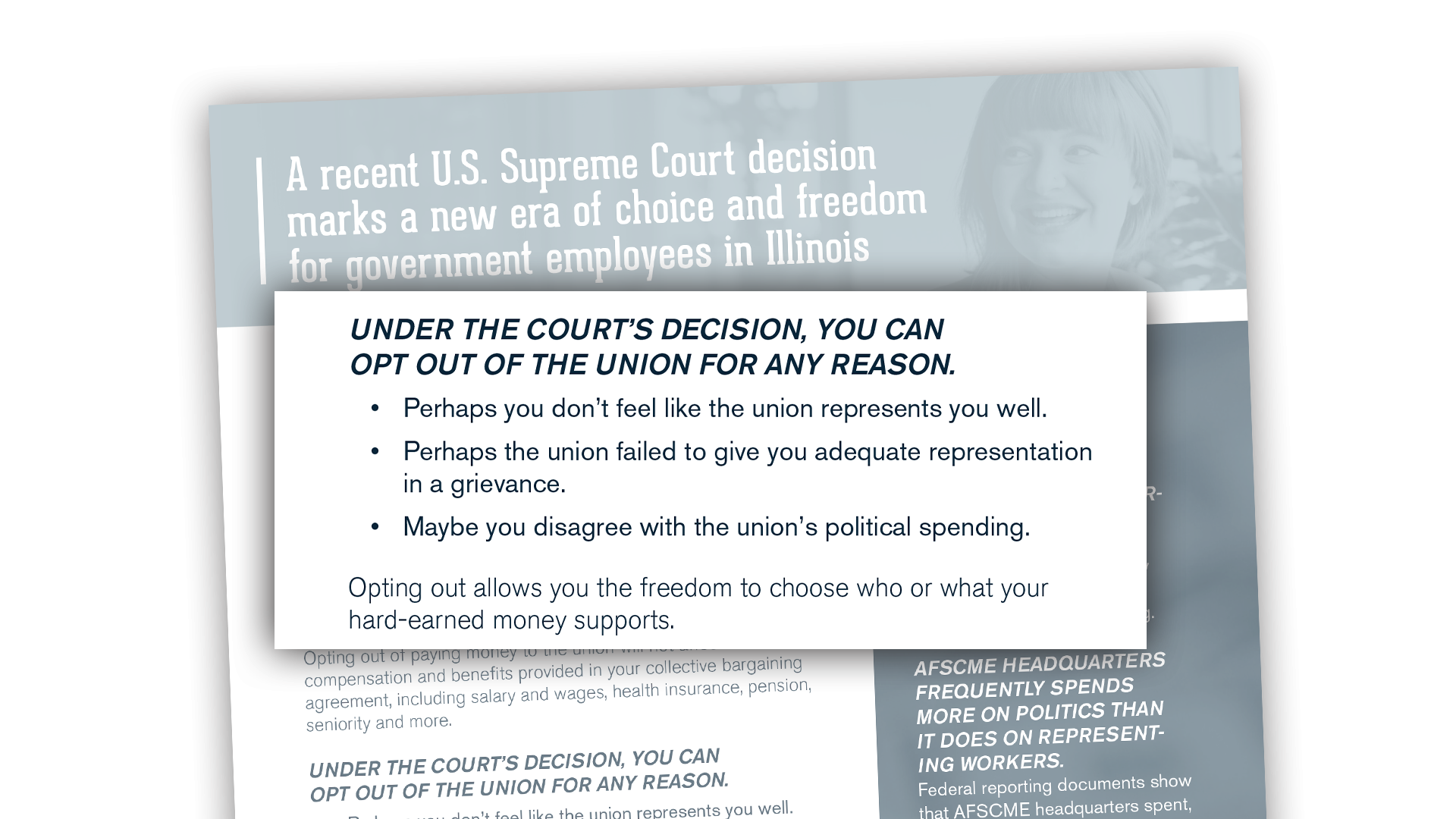 “We want to be a resource,” IPI spokesman Eric Kohn said. “About what Janus means, what was decided in the case. What their rights are – their constitutional rights were withheld from them for 40-some years. Now that they’ve been restored, we want to make sure they have all of the information that they need to make the best choice for themselves about whether or not they want to be a part of the union, whether they want to pay money to a union and support a union.”

Public employees have never been required to join a union, but prior to the Janus decision two months ago, Illinois required all union-eligible workers to pay what are known as “fair-share” fees.

State law requires unions to represent all workers in grievances and to collectively bargain health care, vacation time and other benefits for all employees – whether union members or not. The thinking was that such fees would cover non-members’ “fair-share” of those costs.

But Janus, formerly a state employee who was hired by the IPI in July, argued that it breached his First Amendment rights for his government employer to force him to pay the fee. (As the mailer words it: “pay money to a union or forfeit your job.”)

The agreement from a majority of U.S. Supreme Court justices could have long-term implications: Should union membership drop as a result, they’ll have less power to negotiate, which would likely lead to lower wages and benefits. Labor would also lose political influence, giving a boost to conservatives like those who back the IPI.

“When you look at who funds IPI, it’s definitely about politics. Gov. Bruce Rauner gives them money. You can see that Dick Uihlein, who is a big conservative billionaire investor, gives them money as well. This is about privatizing public education and our members know that,” said Illinois Education Association spokeswoman Bridget Shanahan. “If they can take away our members voices, our teachers, our education support staff – if they can silence them and the voice they use to advocate for their students, then they are one step closer to privatizing education.”

Shanahan said the flier contains “misinformation” in a section headlined “Member Money Spent on Politics” because no member dues are spent on political activities.

Shanahan says the IEA has seen a decline of less than 1 percent of its members.

“In the weeks since the Janus case was decided, we’ve been reaching out to former fee-payers and they to us. What we’re hearing is that they recognize the value of the union, realize it has a cost and want to contribute toward that cost. As a result, we have seen more than 1,000 former fee-payers sign up as new dues-paying members, with only a relative handful (several dozen) of former members dropping out,” David Kreisman, with the American Federation of State County and Municipal Employees Council 31.

“So while we’re off to a good start, we know this is just the beginning. The other side’s full assault hasn’t yet been launched. In the meantime, we’re going to keep working hard every day to sign up more former feepayers and to build our union stronger than ever,” Kreisman said Monday in a statement.

Meanwhile, both camps are directing those with questions to competing websites: The IPI’s is tellingly “LeaveMyUnion.com” while the IEA’s is “ProudIEAmember.org.”