Maku the eastern black rhinoceros is celebrating his 30th birthday at the Lincoln Park Zoo today, and employees and volunteers threw him a party.

The 3,000-pound megaherbivore can typically be found rolling in mud, eating hay, vegetables and tree branches or interacting with zookeepers. And while loneliness is likely not an issue for this solitary creature, it might well be: Maku is one of less than 1,000 critically endangered eastern black rhinos on the planet.

His story is innately linked to the black rhino conservation campaign.

At the end of the 1960s, there were an estimated 70,000 black rhinos living in Africa, but a poaching epidemic that sparked in the early '70s decimated their population by more than 95 percent. It remains the black rhino's greatest threat in their natural habitat of Kenya and southern Africa. In 1993, just 2,475 individuals were recorded.

The rhino’s horn is believed to serve medicinal purposes – though it's made mostly of keratin, the same protein found in human fingernails – and is even used as a party drug or symbol of wealth in Vietnam, where a rhino’s horn is literally worth more than its weight in gold.

Conservation efforts have since helped the species rebound: There are roughly 5,055 black rhinos today, but the subspecies to which Maku belongs has the lowest population at just 799, according to the U.K.-based conservation charity Save the Rhino. A fourth subspecies, the western black rhino, was declared extinct in 2011 by the International Union for Conservation of Nature. 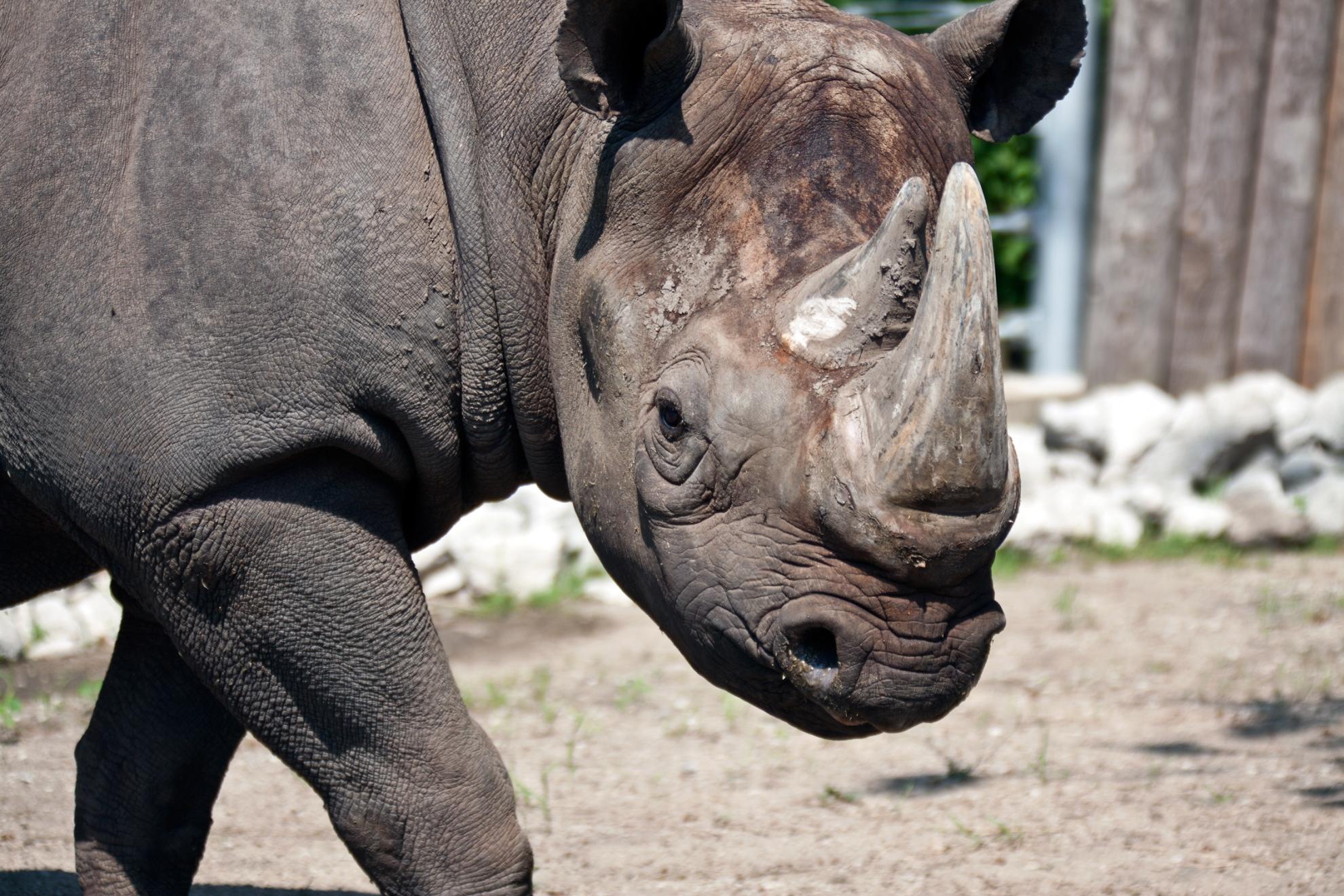 Maku was born on March 11, 1986, at Zoo Miami as part of their Species Survival Plan for black rhinos, a program developed by the Association of Zoos and Aquariums (AZA) to ensure the survival of endangered species in North American facilities. Two years later, he was moved to the Caldwell Zoo in Tyler, Texas, where he lived before arriving at the Lincoln Park Zoo in 2003.

Mark Kamhout, curator of mammals at the Lincoln Park Zoo, calls Maku “an ambassador of his species” to the 3.5 million visitors the zoo attracts every year.

Kamhout couldn’t confirm exactly how many offspring Maku has fathered, but he’s produced at least a few rhino calves in his lifetime and is a grandfather. In August 2013, he fathered King, the first rhino born at the Lincoln Park Zoo since 1989.

“He is very genetically valuable,” Kamhout said. “There are only about 60 black rhinos in AZA zoos in North America.” 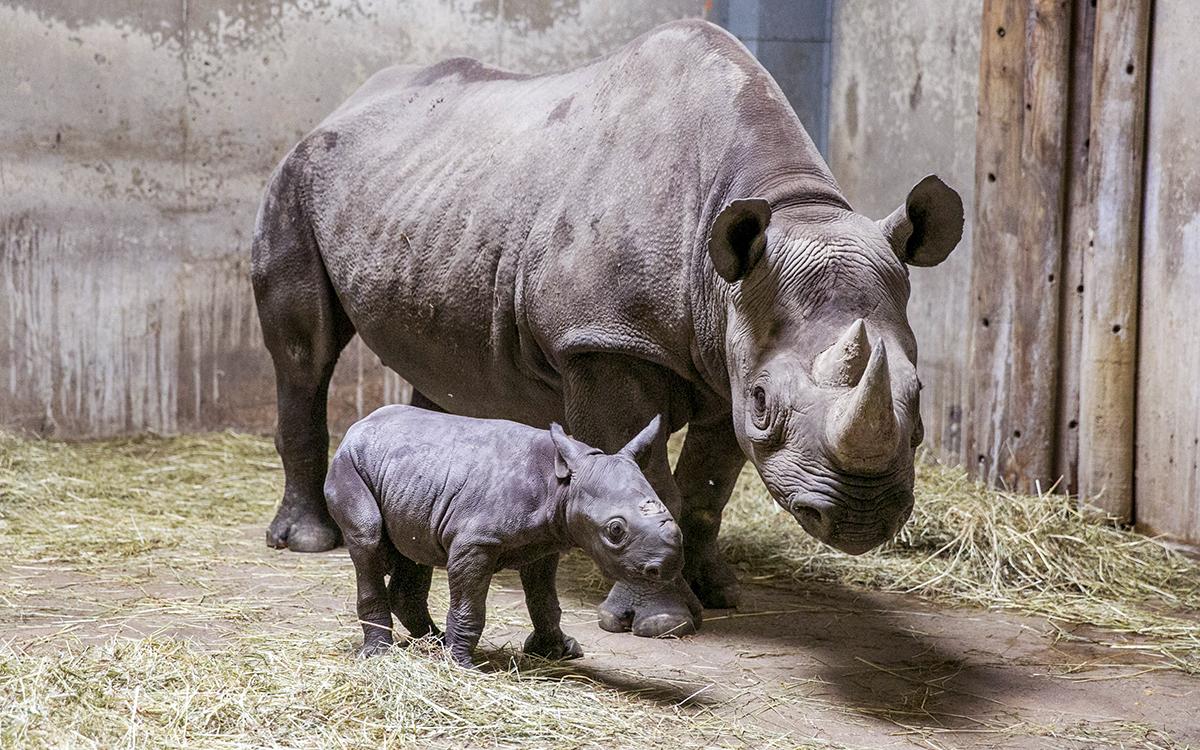 Female black rhinos use their horns to protect their young while males may use them to battle attackers or investigate threats. Kapuki and newborn calf King are seen here in the birthing area of the Regenstein African Journey exhibit. (Lincoln Park Zoo)

Don't expect to see the family hanging out together, however. Black rhinos are solitary animals and males take no part in rearing their young. Even King's mother Kapuki, after almost two years of nursing and raising King, rejected her calf – a natural development for the species.

“She made it very clear one day,” Kamhout said. “They were eating together and she just kind of looked at him and had a look in her eyes and kind of backed up. He saw that and thought, ‘Okay, mom doesn’t want me near her anymore,’ so she didn’t have to do much. He figured it out. We then separated them.

“People think it’s sad, but after about an hour or two, he was eating hay on his own and acting fine.”

There are currently four eastern black rhinos at the zoo. Kamhout joked about their role as “Match.com for endangered species” since breeding depends on not only a genetic match, but a behavioral one. Ricko, a 19-year-old male at the zoo, has not had luck breeding with Kapuki, so Kamhout said he’ll likely be moved to another zoo for that purpose.

“As you can imagine, you don’t just walk a 3,000-pound rhino to the zoo,” Kamhout said. “We’ll have to train him to go into a trailer, which takes time.”

Ricko may have struck out with the zoo’s only female black rhino, but AZA experts are recommending that Maku and Kapuki breed again and the zoo is hopeful another black rhino calf is possible. According to the World Wildlife Fund (WWF), female rhinos have a gestation period between 419 and 478 days, with an average of 2.5 to 3.5 years between calves. That means Maku and Kapuki will be re-introduced soon.

Kamhout says the rhino couple get along very well, despite their species’ solitary nature. Maku will lie on one side of the panels separating their yards while Kapuki is on the other. When mother and son first emerged outside in November 2013, the proud father couldn’t help but investigate. A photograph captured the moment.

“He was very curious because he hadn’t seen the female in a while,” Kamhout said. “Then he noticed there was a little one trotting about for the first time.” 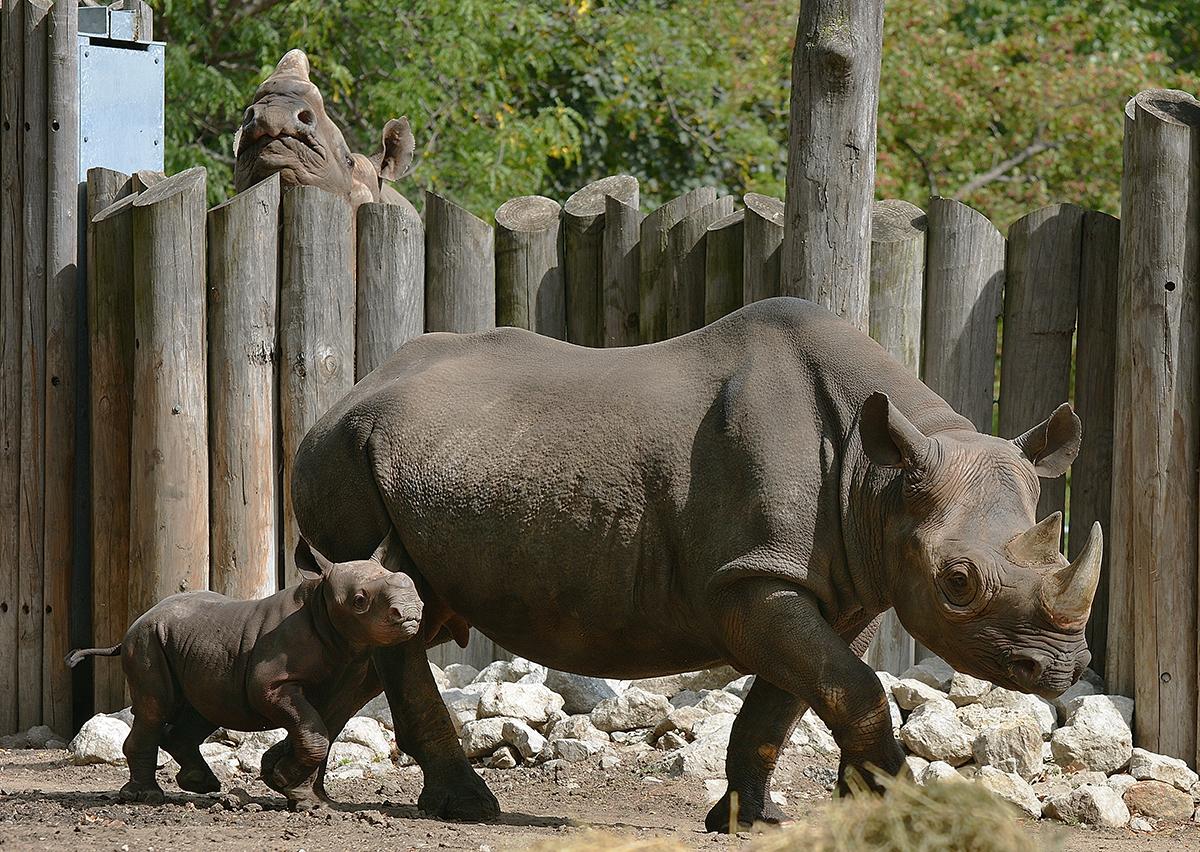 Although eastern black rhinos don't play a role in rearing their young, Maku couldn't help but peer over a barrier to take a peek at Kapuki and his son King in November 2013. (Laszlo Szilagyi / Lincoln Park Zoo)

At 30 years old, Maku isn’t exactly in the prime of his life, but he’s in good health, according to the zoo. A 30-year-old black rhino in the wild would be considered old, but in captivity, they can live into their 40s.

“If males are physically able to mount a female, they can breed throughout their life,” Lucas said. “He can still breed if he’s 40 as long as his legs are strong enough.”

Lucas says the doubling of the black rhino population in the past 20 years has demonstrated the species’ resilience as well as the success of conservation efforts and increased pressure on countries to regulate the illegal trade of rhino horns. He affirmed that black rhinos are good mothers capable of living long and steadily reproducing, albeit slowly.

“They have resilience built into their adaptability over millions of years of evolution,” said Lucas. “If they have food, water and privacy, they’ll do fine.” 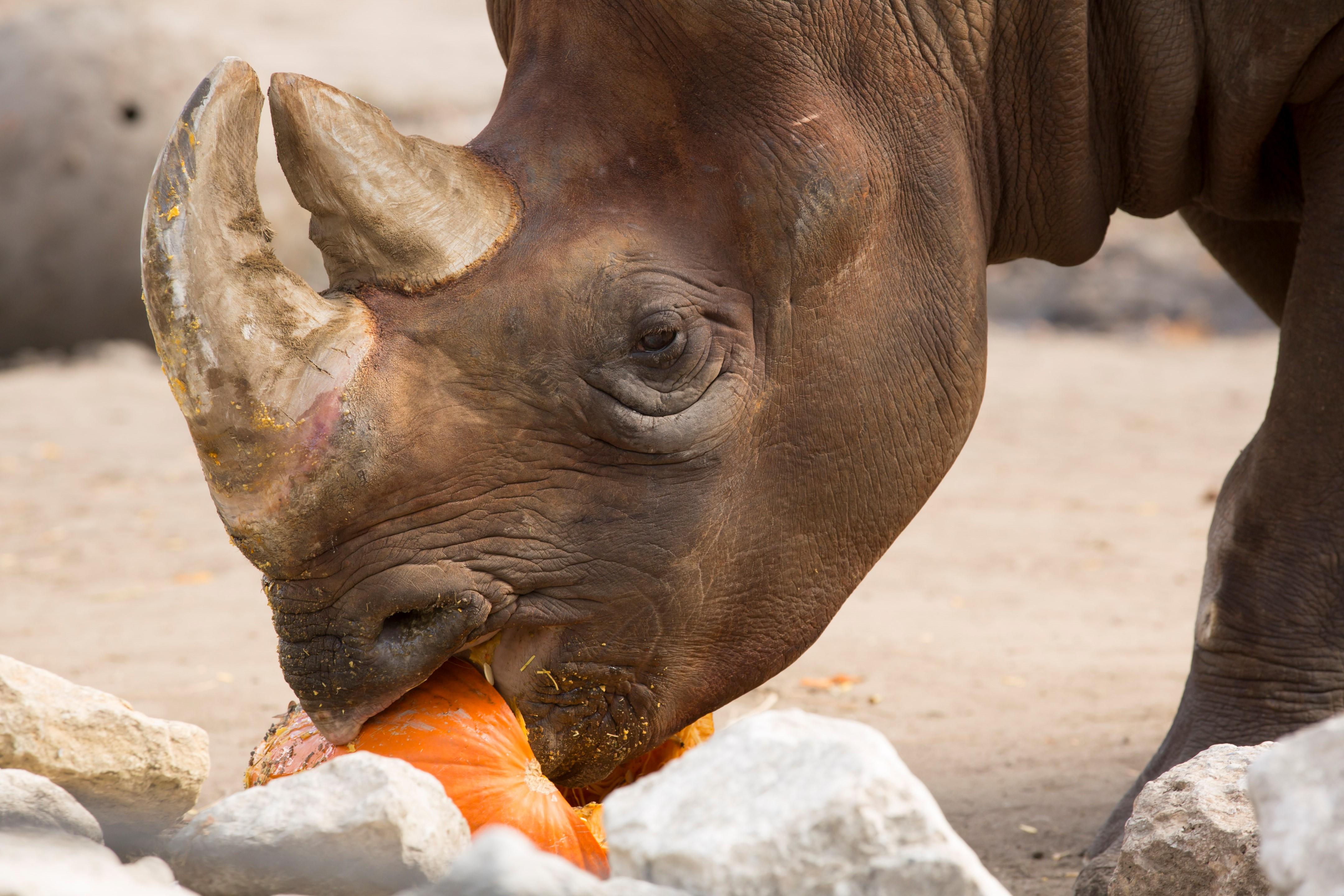 The pointed upper lip of the black rhino species distinguishes them from the white rhino species, which has a squared lip. Black rhinos are browsers that use their lip to pluck leaves and fruit from trees. (Lincoln Park Zoo)

'These poachers are hired thugs'

Part of IRF’s mission is to provide support for 24-hour armed guards, tracking dogs, special training and surveillance in protected national parks where rhinos are at risk of being poached. Lucas said 1,215 rhinos were killed in South Africa during 2014 alone.

But poachers persist. And in order to remain undetected, they resort to relatively quiet practices which often result in slow, painful deaths for their prey. Some rhinos have their horns sawed off while they’re still alive, leaving them to slowly bleed to death.

“Because of the protection units, some are turning to poison arrows because they don’t make any noise,” Lucas said, “which is an excruciating and slow death for the animal.”

Lucas dispelled the myth that it’s impoverished villagers hunting rhinos in order to feed their families.

“That used to be the case many years ago, but not anymore,” he said. “Most of these poachers are hired thugs killing animals for a living. They’re very efficient, well-trained and well-compensated.”

The rhinos aren’t the only ones in danger. Lucas said some poachers are militarily trained and have killed armed guards protecting rhinos.

Countries throughout the world are recognizing the importance of preserving the world’s black rhino population. In December 2013, Kenya, which has the largest population of wild black rhinos, adopted the new Wildlife Conservation and Management Bill, which imposed higher fines, longer prison terms and confiscation of property for poachers found with prohibited wildlife items.

Rhinos are what the WWF call “walking fossils” – they’re one of the oldest groups of mammals on Earth.

“They’re part of the world’s natural heritage,” Lucas said. “We need to be the ones who protected them, not the ones who wiped them out.”