An African-American movie studio in Logan Square made silent films that got people talking, but for all the wrong reasons.

Geoffrey Baer is here with the story of Ebony Films and to answer viewer questions about the old Paradise Theater in West Garfield Park and a former school for the deaf in Avondale in this week's edition of Ask Geoffrey.

Was there an African-American film studio at 2800 block of California? 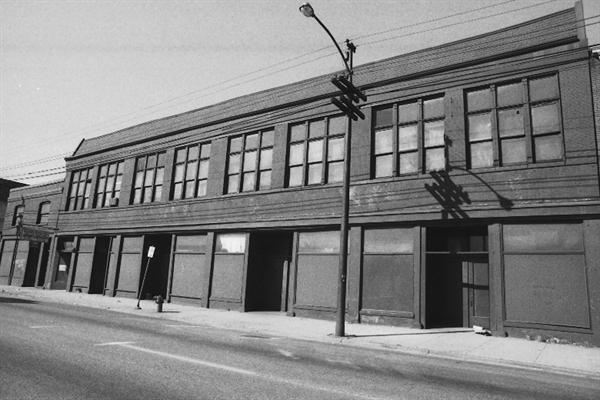 It was actually few blocks south, but yes, there was a black film studio called Ebony Film Corporation in Logan Square at 2332 N. California Ave. Like the much more famous Chicago film producer Oscar Micheaux, Ebony produced what were known as “race films” made and performed by African-Americans. 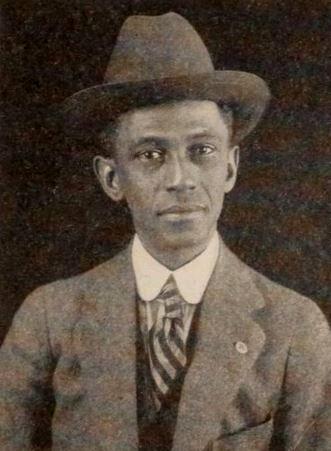 Luther Pollard, 1918 Ebony was run in part by Luther Pollard, an African-American man who came from a prominent Rogers Park family – in fact his brother Fritz Pollard was the first black NFL coach. Ebony Films was white-owned, but Pollard wanted to make films that would appeal to both the black and white communities.

In a letter to a West Coast producer, Pollard said that his films didn’t rely on racial stereotypes for humor, or what he called “crap-shooting, chicken-stealing, razor-dealing, watermelon-eating stuff.”

But many in the African-American community believed that the exact opposite was true. Arnie Bernstein, author of the book “Hollywood on Lake Michigan,” told us that Ebony titles played up those offensive racial stereotypes.

Some audiences were so offended by the films that theaters boycotted them and editorials in the Chicago Defender condemned them.

By some accounts the really offensive films were actually purchased from another company, but by the time Pollard came on board, he never really had a chance to fight the impression people already had of the company. In fact, NYU professor and film scholar Moya Luckett says that some of Ebony’s films could even be seen as racially progressive for the time.

Ultimately, the boycotts and bad press did in Ebony Films. They folded in 1919 after making only about 20 short films.

Today there’s an abandoned car wash at the former studio site. Luther Pollard went on to become to become a successful advertising executive. He died at the age of 99 in 1976.

The Paradise Theater was located at 231 N. Pulaski, the west side of Pulaski. But I found a picture looking down Pulaski and based on the location of the 'L' station the theater is on the east side of the street. It can't be the Paradise Ballroom because that was next to the Guyon Hotel, which is not in the picture. How could that be? 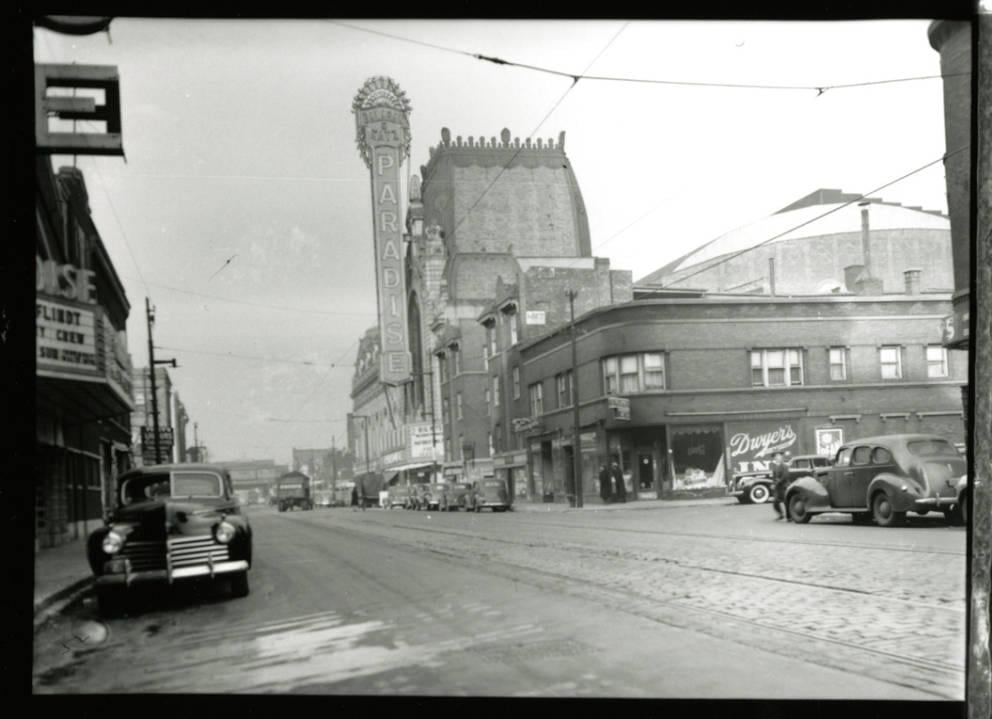 Here’s the photo our viewer is referring to in West Garfield Park, the big Paradise sign on the right there, on a building with a towering roof.

On the left there’s the bottom edge of a marquee and sign that ends with “ISE.” Center back you can see the Lake Street “L” station over Pulaski, or what was then Crawford Avenue. Given that we’re looking at the “L” station in the background, we know for certain that this photo looks north.

So while our viewer is right that the Paradise Ballroom and Guyon Hotel were both on the same side of the street, and that the Paradise Theater was across the street from them, he has the locations for the ballroom and the theater reversed. Remember, in Chicago, odd-number addresses fall on the east side of north-south streets, and even-number addresses fall on the west side. 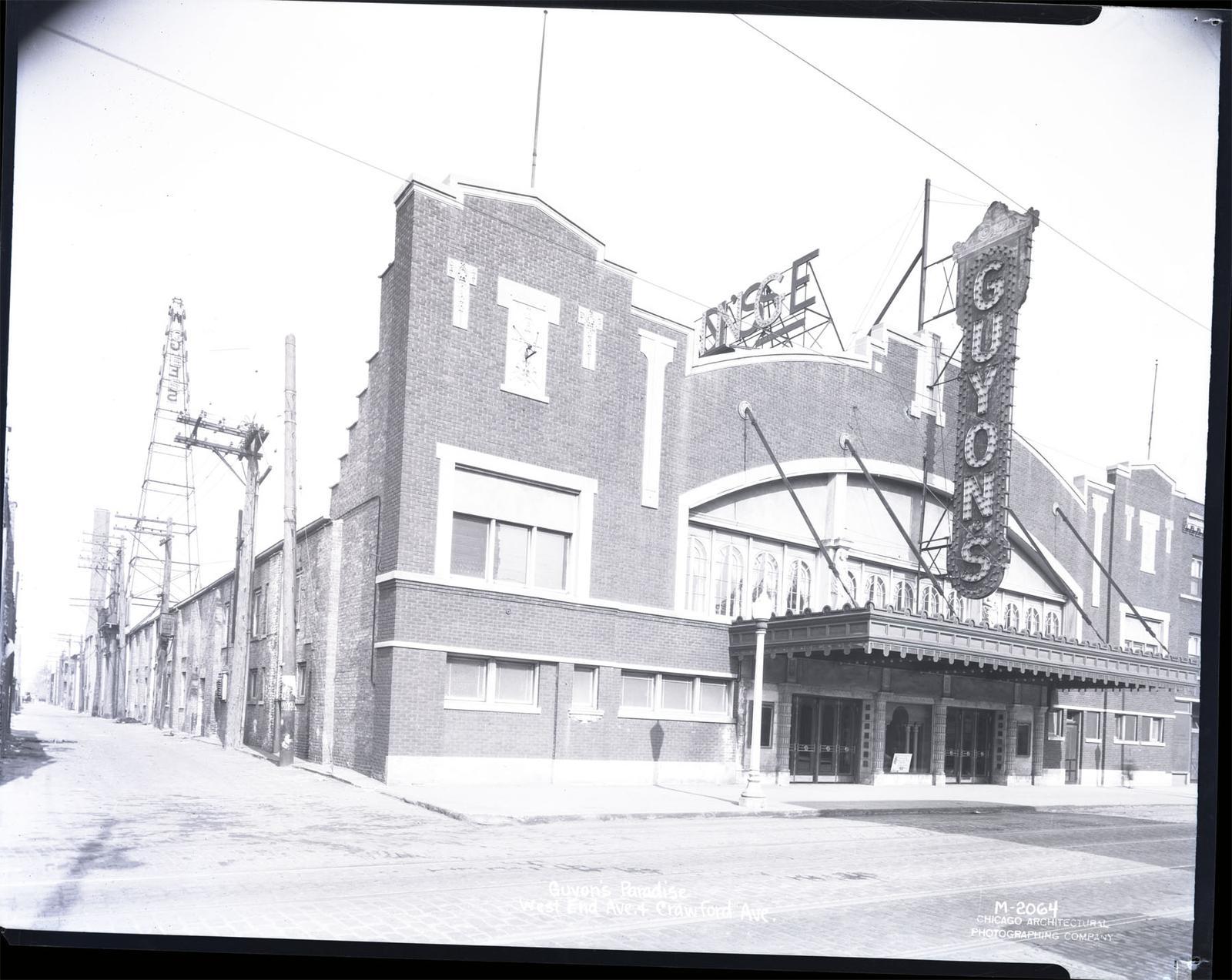 The hotel and ballroom were built by French-Canadian real estate mogul J. Louis Guyon to provide a squeaky-clean and wholesome alternative to jazz age decadence. 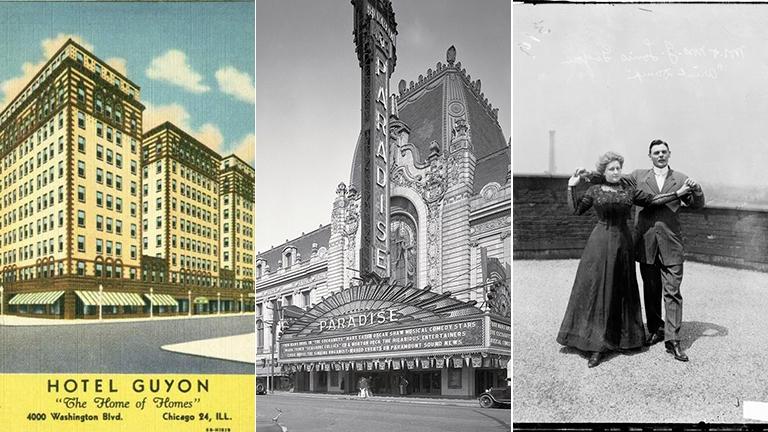 Of the three buildings, only the Guyon Hotel is still standing, and it’s definitely seen better days. It was designed by Jens J. Jensen as a residential hotel and opened in 1928, the same year the theater was built across the street.

Guyon’s Paradise Ballroom was built quite a bit earlier, in 1914. At the Paradise, Louis Guyon offered a morally upright alternative to popular “hotsy-totsy” jazz dances like the Charleston and the foxtrot. An ad for the ballroom proclaimed: “When you are told that youth of both sexes can mingle in close embrace with bosoms and abdomens in friction and with limbs intertwined, and survive the experience without mental, moral and physical pollution, you know the teller LIES.”

Guyon’s Paradise Ballroom was lost to a fire in 1972, where some not-so-morally-upright foul play was suspected.

The Paradise Theater was demolished in 1956, a short life for a movie palace deemed one of the city’s loveliest. What doomed the Paradise Theater to the wrecking ball was its acoustics. It was built at the end of the silent film era. When the “talkies” came to the Paradise, it quickly became apparent that it wasn’t built for sound, and the theater, glorious though it was, lost business to the nearby Crawford and Marbro theaters.

The Paradise does live on in music history, though – in 1981 the band Styx recorded a concept album inspired by the rise and fall of the theater titled, appropriately, “Paradise Theater.” The album’s cover art, however, was based on another lost Chicago theater – the Granada.

The last man standing on Pulaski, the Guyon Hotel, began its slow decline during the 1950s and ‘60s, when the population of Garfield Park plummeted due to white flight. The hotel has been more or less vacant since the 1980s when it was used as low-income residential housing. 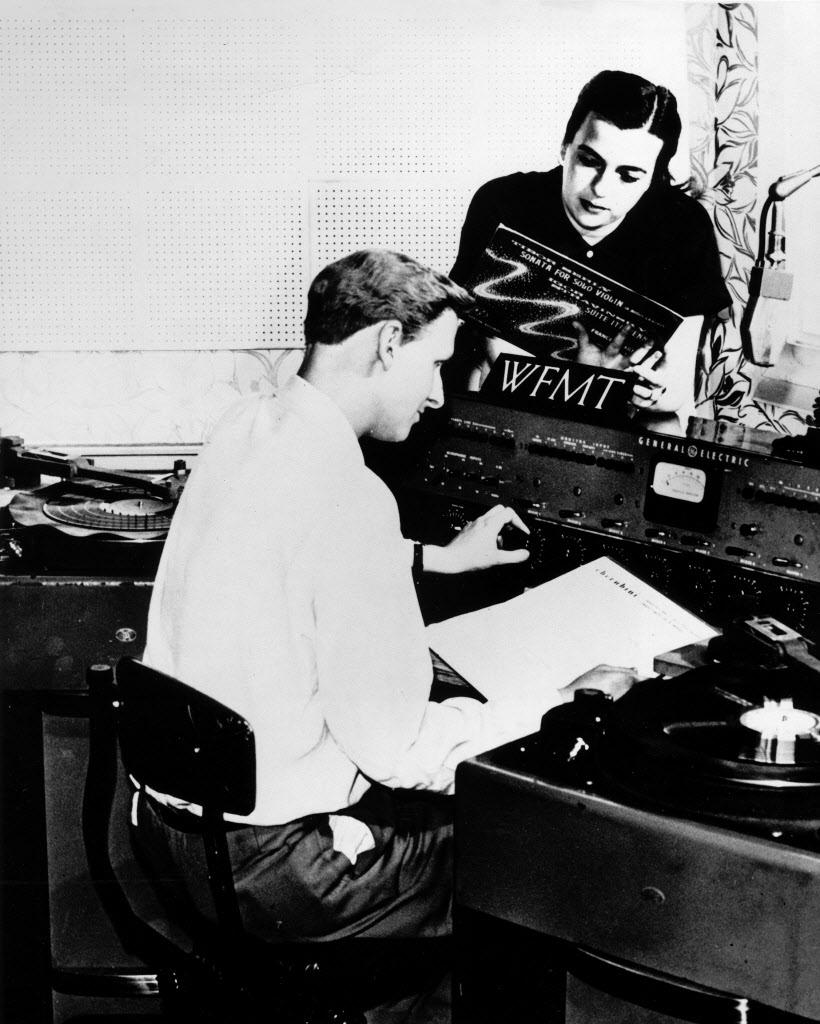 In 1988, President Jimmy Carter stayed in a reportedly roach-infested, sparsely-furnished room at the Guyon while working on a Habitat for Humanity project elsewhere in the city. The Guyon Hotel nabbed a spot that same year on the National Register of Historic Places – and its decrepit present-day condition also gave it a spot on Preservation Chicago’s most-endangered Chicago landmarks list in 2013 and 2014.

A little bit of our organization’s history also lived at the Guyon: On the hotel roof were AM radio towers which Guyon used to broadcast his radio station, WGES, which Chicago magazine called part of his “clean-media empire.” Those towers were replaced with an FM tower in the 1940s, which later broadcast what became our sister classical music radio station, WFMT, in the 1950s. The second floor ballroom housed WFMT’s original studios.

Was there a building of the NW side of Chicago for the deaf? My mother vaguely remembers seeing a wrought iron fence, which had the word ‘Ephphatha’ on it.  That word is used in the Bible when Jesus healed a deaf man.  She saw this in the 1930s or 1940s. 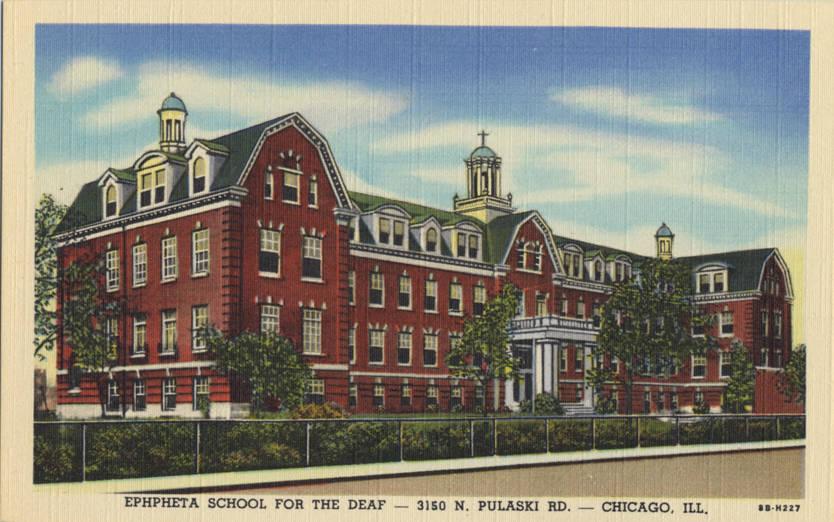 The Chicago Ephpheta (pronounced EF-uh-thuh) School for the Deaf stood at 3100 N. Pulaski Road from 1909 to 1950. As our viewer notes, the name has a Biblical origin. It is Aramaic for “be opened.” In the gospel of Mark, Jesus says this when he heals a deaf man.

Ephpheta, which opened in 1884 and moved to Belmont and Crawford (now Pulaski) avenues in 1909 was known for some inventive ways to educate the deaf. In addition to the three R’s, Ephpheta students were taught lip reading and sign language. The teachers used revolutionary techniques and equipment, like vibrations from music as a tool to teach speech, and an auditory training unit that removed distortion and amplified sound enough to allow some children to actually hear.

To ensure the children would be able to work after graduating, girls were educated in the domestic arts, millinery, and sewing, while boys were taught trades.

The school even had a baseball team and competed against other schools for the deaf, including one whose team was named the Silent Stars. 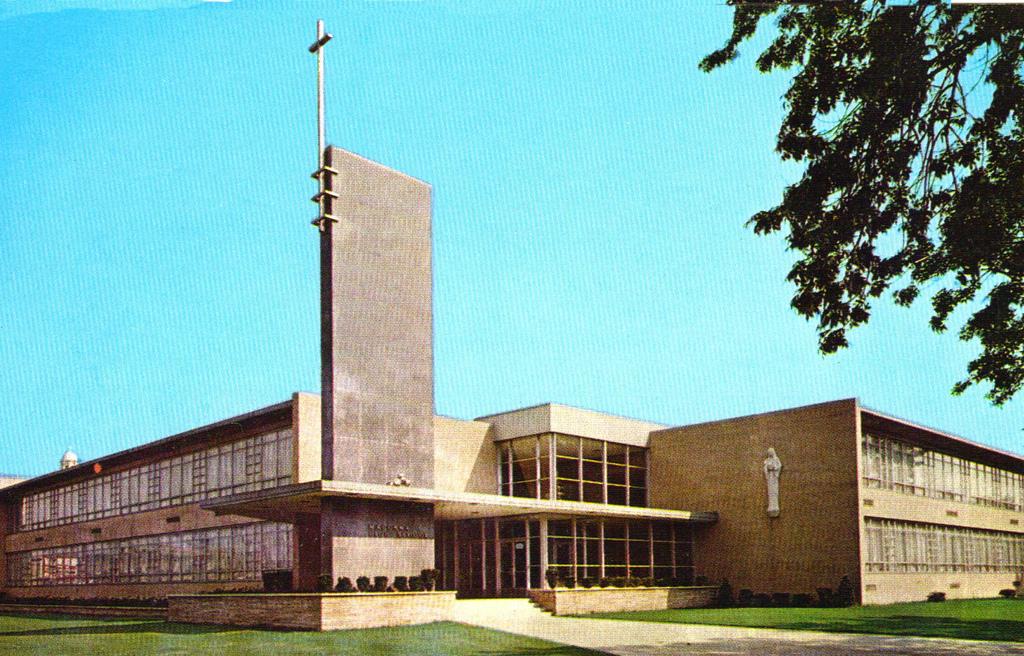 Ephpheta educated deaf children until 1950, when the school closed and the Sisters of Charity, who ran the school, moved their charity to the Philip Starck house at 330 W. Wellington Ave. The Ephpheta school building was converted to Madonna High School by the Sisters of St. Francis of Kunegunda. The old building was torn down and replaced with a new Madonna High School in 1970, but that building only lasted 30 years.